I can only be grateful to the Society for American Archaeology (SAA), the professional association for the archaeology of the Americas, for devoting no less than 27 pages of the November issue of its journal, The SAA Archaeological Record, to an attack on my 2019 book, America Before: The Key to Earth’s Lost Civilization.

More than an attack, the issue self-admittedly sets out to inoculate students, journalists and members of the general public from contamination by my arguments – tantamount to thought-crimes – that civilization may be much older and much more mysterious than we have been taught. 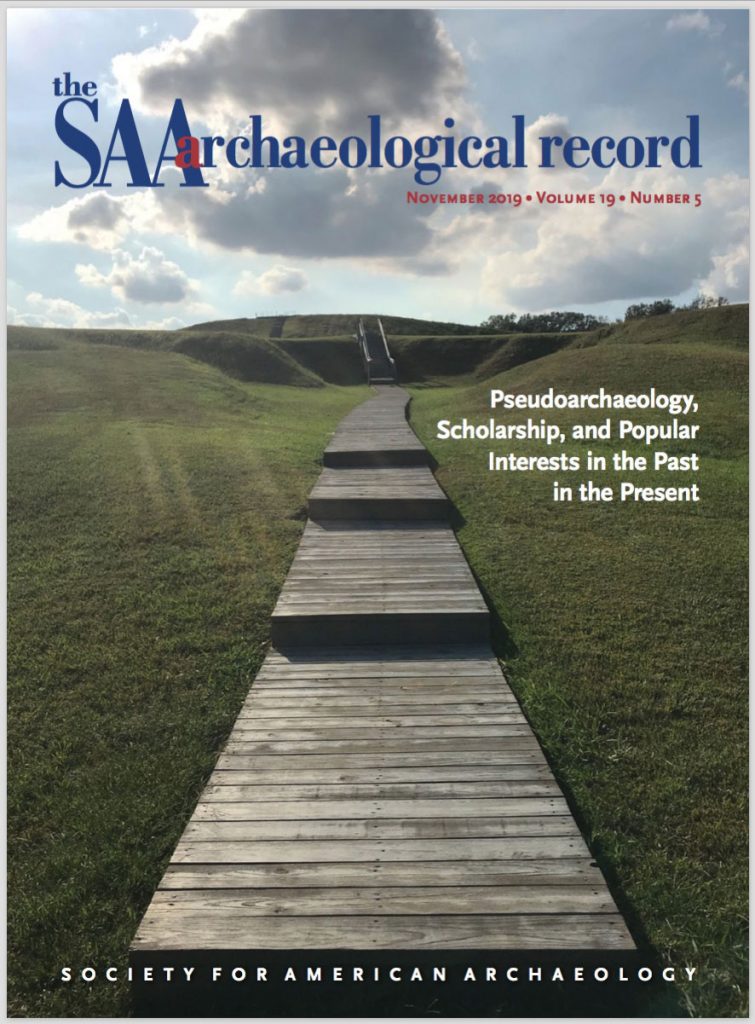 For a writer such as myself, with a controversial, non-mainstream view of the past, to face pushback on this scale is a sure sign that the archaeological establishment feels the ground moving under its feet. Indeed, Christopher Rodning, the Editor of The SAA Archaeological Record seems to confirm this when he explains his decision to focus on America Before in his November issue:

This past year has witnessed the publication of another book by Graham Hancock, the writer and former journalist whose books— 10 since 1992—have sold millions of copies. His literary record makes him one of the major writers in the genre of pseudoarchaeology. It is important for archaeologists to think carefully and critically about what Hancock and similar writers are saying, how they are saying it, and why there is widespread public interest and fascination with it.

Carl Feagans, who contributes an article to the issue, is particularly annoyed that America Before was a New York Times top ten hardcover nonfiction bestseller, describing its arguments and evidence as “farfetched” and objecting “in spite of his [Hancock’s] lack of formal training, experience, or background in either science or archaeology”, to the positive reception given to the book by readers. 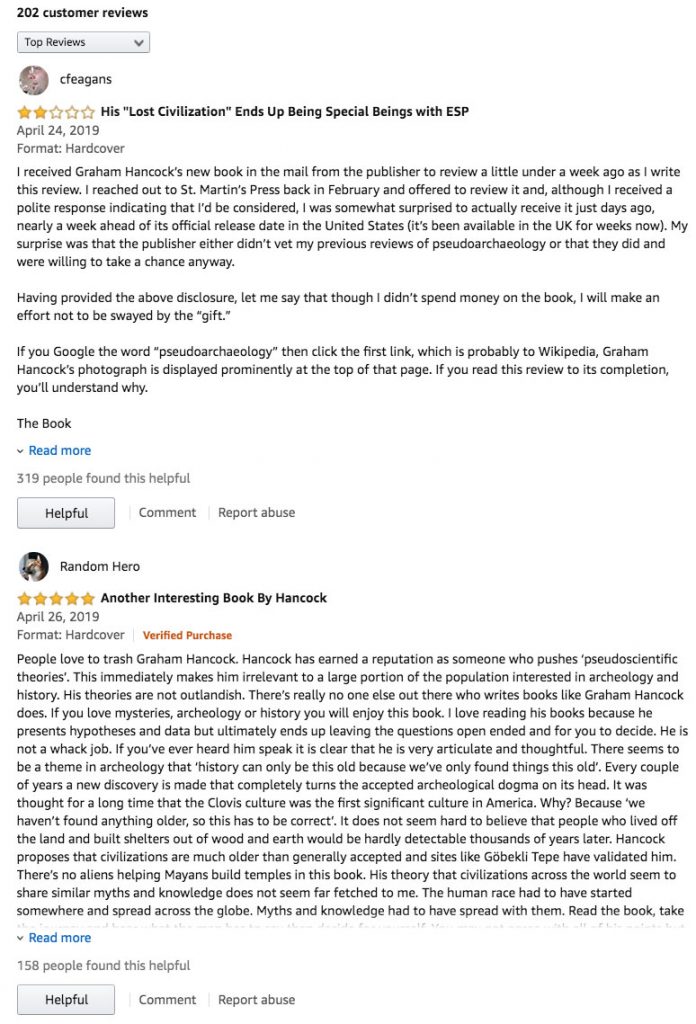 No doubt I am wrong to find it statistically anomalous – indeed rather structured and organized – that out of the 203 reviews of America Before on Amazon US, Feagan’s 2-star review has received more than twice as many “helpful” upvotes – 319 of them – as the 5-star review that follows it.

Another contributor to the well-organized November issue of The SAA Archaeological Record is John Hoopes, a professor in the Department of Anthropology at the University of Kansas. He, too, is offended by the strong readership for America Before despite the unforgivable fact that:

“it makes assertions that actively contradict and criticise professional archaeology.’

Meanwhile blogger Jason Colavito, who also contributes an article to the issue, strives mightily to accuse me of condoning white nationalist racism while being obliged to admit that:

“Hancock is careful to attribute his lost civilization to a Native American origin.”

I won’t cite the articles of every contributor to the issue and refer those who are interested to the full online edition of the journal itself, pages 8-34, available (and downloadable as a pdf) through this URL:

Before closing, however, I’m understandably very happy to quote here the useful concise summary of America Before given by anthropologist Jeb J. Card in his contribution to the issue (pp 26-30):

“Attempting to critique America Before: The Key to Earth’s Lost Civilization by Graham Hancock (2019) using the criteria of professional archaeology is doomed to failure, as his goals are outside of the materialist practice of scientific archaeology. In a nutshell, Hancock argues that an ancient civilization of the Pleistocene emerged in North America that was based not on material technology but on psychic/spiritual knowledge. It became a global sea-based society comparable with the late pre-Industrial British Empire. These Ice Age Americans (spoiler: Atlanteans) foresaw a cosmic disaster and spread memetic seeds of sacred knowledge of geometry, astronomy, and the Otherworld and how souls may navigate it around the world. After this civilization was destroyed by impact events from a comet during the Younger Dryas, these advanced people came to be remembered as magicians and gods. Seeking this knowledge today is a path to truly understanding reality and the spiritual elements denied by materialist science.”

Card’s precis of my arguments is fair, and in general I’d say that his analysis of my work and its function is much more carefully thought through than that of any of the other contributors. For them (as for Wikipedia, I might add) it seems to be enough simply to describe me as a “pseudoscientist” or a “pseudoarchaeologist” in order, without making any further effort, to damn to perdition everything I have ever written. 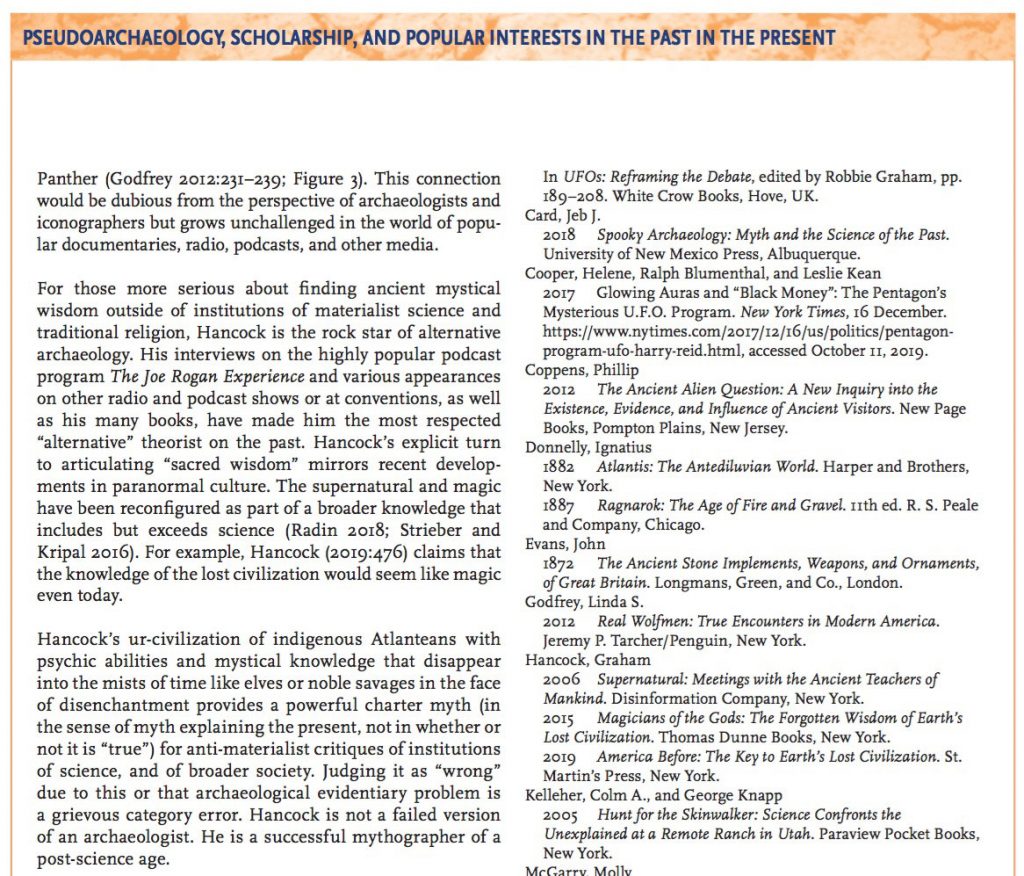 Transcending easy insults and childish name-calling, however, Card sees a bigger picture that he believes his colleagues have missed:

For those more serious about finding ancient mystical wisdom outside of institutions of materialist science and traditional religion, Hancock is the rock star of alternative archaeology. His interviews on the highly popular podcast program The Joe Rogan Experience and various appearances on other radio and podcast shows or at conventions, as well as his many books, have made him the most respected “alternative” theorist on the past. Hancock’s explicit turn to articulating “sacred wisdom” mirrors recent developments in paranormal culture. The supernatural and magic have been reconfigured as part of a broader knowledge that includes but exceeds science (Radin 2018; Strieber and Kripal 2016). For example, Hancock (2019:476) claims that the knowledge of the lost civilization would seem like magic even today.

Hancock’s ur–civilization of indigenous Atlanteans with psychic abilities and mystical knowledge that disappear into the mists of time like elves or noble savages in the face of disenchantment provides a powerful charter myth (in the sense of myth explaining the present, not in whether or not it is “true”) for anti-materialist critiques of institutions of science, and of broader society. Judging it as “wrong” due to this or that archaeological evidentiary problem is a grievous category error. Hancock is not a failed version of an archaeologist. He is a successful mythographer of a post-science age.

Once again, the URL of the November issue of The SAA Archaeological Record is as follows:

I urge you to read it and if you have read America Before you will be in a position to make up your own mind.

Meanwhile, here’s the America Before page on my website:

And here is a short video trailer about the book: