Egyptologists frequently pour scorn on alternative researchers calling them “pseudoscientists” and “pyramidiots” and other such insulting epithets. But look what happened when a leading Egyptologist was put to the test…

Dr Zahi Hawass, frequently promoted by his colleagues — for whom he is an icon of the mainstream point of view — as “the most famous archaeologist in the world”, had agreed to participate with me on 22 April 2015 in what was billed and advertised as “the first open debate between the representatives of two completely different versions of history.” Each of us was to give a one-hour presentation, followed by a debate in which the audience would join in with questions. In the event the debate never happened. Zahi refused to accept a coin-toss to decide the speaking order and insisted that I speak first. I agreed to this, despite the fact that the first speaker is at a slight disadvantage in any debate since he does not have the opportunity to hear the other speaker’s presentation before giving his own.

Before most of the audience had arrived, I was checking the focus on the slides in my PowerPoint presentation prior to giving my talk and I put up on the screen an image which shows the Orion/Pyramids correlation and the Sphinx/Leo correlation at Giza in the epoch of 10,500 BC. Rightly and properly since the Orion correlation is Robert Bauval’s discovery I included a portrait of Robert Bauval in the slide. As soon as Zahi saw Robert’s image he became furiously angry, shouted at me, made insulting and demeaning comments about Robert, and told me that if I dared to mention a single word about Robert in my talk he would walk out and refuse to debate me. I explained that the alternative view of history that I was on stage to represent could not exclude the Orion correlation and therefore could not exclude Robert Bauval. At that, again shouting, Zahi marched out of the debating room. Frantic negotiations then took place off stage between the conference organisers and Zahi. Finally Zahi agreed to return and give his talk and answer questions from the audience, but he refused absolutely to hear or see my talk, or to engage in any debate with me. I therefore gave my talk to the audience without Zahi present (he sat in a room outside the conference hall while I spoke). When I had finished I answered questions from the audience. Then Zahi entered, gave his talk, answered questions from the audience and left. 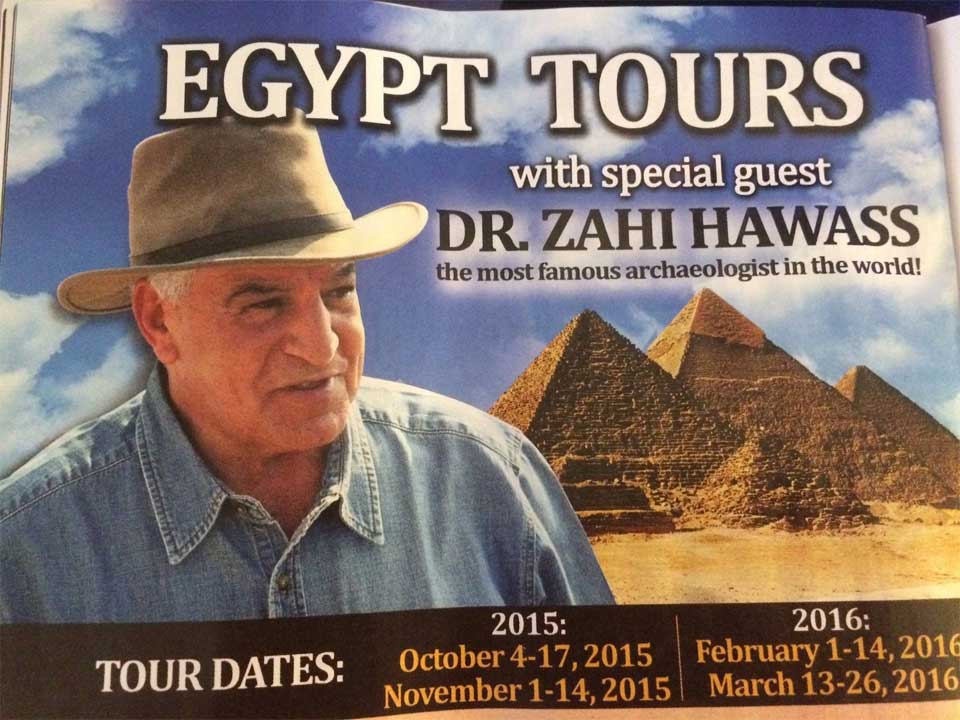 An advertisement for tours to Egypt with Dr Zahi Hawass in the Smithsonian magazine and in Popular Science magazine, where he is promoted as the most famous archaeologist in the world.

One of the few members of the audience who had arrived early did manage to record part of the scene of Zahi storming out of the conference room — see here: https://www.youtube.com/watch?v=8Ziu2ygE_Wc.

Likewise during Zahi’s Q&A he was asked a question about the 11,600-year-old megalithic site of Gobekli Tepe in Turkey and whether it had any impact on his assessment of the disputed age of the megalithic Great Sphinx of Giza (which I and my colleagues have long argued might be of similar antiquity). Unfortunately it appeared that Zahi was completely ignorant of the existence or implications of Gobekli Tepe, arguably the most important archaeological site in the world, so he was unable to answer the question which he passed on to the moderator, Dr Miroslav Barta, Head of the Czech Archaeological Institute in Cairo (who was by prior agreement not supposed to intervene or take sides in the debate at all) and whose knowledge of Gobekli Tepe was also clearly incomplete (for example Dr Barta stated that Gobekli Tepe dates from the “late eleventh millennium BC through the tenth millennium BC” whereas in fact the dates presently established for Gobekli Tepe are from 9600 BC — tenth millennium BC — through 8200 BC — ninth millennium BC — i.e. from 11,600 years ago to 10,200 years ago). Dr Barta also used circular logic, arguing that Egyptian civilisation is thousands of years younger than Gobekli Tepe and that therefore there could be no connection, whereas this is exactly the matter in debate, and the point of the question asked, namely whether the findings at Gobekli Tepe require open-minded consideration of the possibility that the Great Sphinx and other megalithic structures at Giza, and with them the origins of Egyptian civilisation, might in fact be much older than Egyptologists presently maintain. I did at that point have a brief opportunity to stand up and give my own point of view on Gobekli Tepe and on its implications for the age of the Sphinx — see here: https://www.youtube.com/watch?v=q4NnCAZcxHg

I had high hopes for this debate — that it might bring about some sort of civil dialogue between alternative and mainstream views of history but I was sadly disappointed. Here is a link to a post I made on Facebook 24 hours before the “debate” which will help to put what happened on 22 April into context.