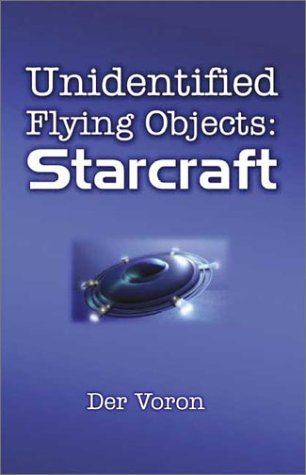 The existence of extraterrestrials has long been a subject of heated debate between scientists, scholars and stargazers who’ve spent many an hour studying the night sky and the universe beckoning beyond. Scientific proof of whether distant life forms and existence are legitimate causes yet an addition bone of contention between UFOlogists and skeptics alike, and while it’s easy to make jokes about Area 51 or Roswell, there is certainly a basis for those jokes and rumors. Something had to have happened in these places and many others throughout the globe to engender such speculation and argument.

In his book, Unidentified Flying Objects: Starcraft, Der Voron has offered an extremely well researched and detailed report of incidents that have occurred all across the globe, from many different eras. Ancient writings may have been the first indication that ‘we are not alone’, and Der Voron cites several of these sources as an example. Such statements originate from many different countries and in different continents, from ancient times to contemporary, from Indian tales of events that took place in the wilds of Kipling country to experiences related by a German artillery gunner during World War Two. Reports of ‘unidentified contact with objects of undetermined origins’ have been filed in government offices from the plains of South America to the fjords of Norway and the steppes of Asia.

Highly annotated and illustrated with fascinating examples of starship models and their possible makeup, armaments and defensive mechanisms, this ambitious work offers a wealth of documented information on not only Starcraft, otherwise known as ‘Flying Saucers’, but the types of extraterrestrials that have flown them. All aliens are not created equal, as their many varied depictions and origins in historical writings attest. The author’s use of a plethora of written documentation ably enhances his description of personal civilian and military accounts of those who have had some kind of interaction with these objects.

Also explored in great detail is the intelligence of our sea life, mainly as that intelligence relates to dolphins and the octopi of our deepest oceans, and how they, in turn, can be used in the search for extended knowledge of the universe surrounding our planet. How and why these creatures have gained such highly specialized communication skills and how it is that an octopus can experience an event and not only remember it, but learn from it, is explored, and commented upon as it relates to man’s search for a higher intelligence.

While replete with scientific data, terms and information, this work by Der Voron is nevertheless highly readable and extremely illuminating for the common reader with no prior knowledge of extraterrestrial existence, while at the same time it also provides hours of reading material and documentation to keep the more knowledgeable busy.

Der Voron’s conscientious effort to dig deep for his sources shows in his detailed reports, and his data gathering and willingness to share that information is a challenging endeavor in which he has aptly succeeded. The existence of extraterrestrials is an immensely interesting topic, one that will be explored for years to come, and this work can provide as an invaluable asset to any stargazer’s bookshelf.