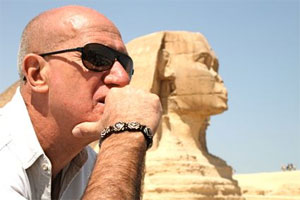 Robert Bauval, co-author with Graham Hancock of Keeper of Genesis [UK] / The Message of the Sphinx [US], The Mars Mystery, and Talisman / The Master Game, will answer your questions on the GrahamHancock.com messageboards. See his website at http://www.robertbauval.co.uk/.

Robert, now that Dr Hawass looks like he may be heading “further up the food

chain”, do you feel that we may get the chance to have a good look at the

anomalies under the Sphinx, or do you think that Hawass will maintain his

Robert Bauval:
We have to wait for the new goverment to be formed. Then we’ll see who

is head of Antiquities, and whether he/she will allow more explorations at

the Sphinx. As for Hawass, he’s out for good…. we hope.

pyramids, like a council that has the best interest of Egypt’s heritage at

heart and not like the muslim arabs that want to destroy everything?

Would you aspire to such a position of authority?

Robert Bauval:
I am a researcher and writer.
I do not seek positions of authority.
But I do hope that such positions in Egypt are filled with honest and dedicated people.

I read Black Genesis recently, and very much enjoyed it. Obviously, there’s still a great deal of discussion about a “legacy” from a supposed higher civilisation that kickstarted Pharonic society.

where you think those “civilisers” may have come from. Would you say it’s

possible that migrations from other parts of Africa may have been

responsible for the earliest flutterings of the sciences in ancient Egypt?

Robert Bauval:
Yes, that’s possible. Also from Asia. But the Saharan culture were the first.

I am planning a book with David Rohl, the Egyptologist, who is very familiar with the Eastern desert prehistoric culture. the ‘boat people’….

But more on this later on.

Do you believe any of the ancient science survives anywhere in writen form and if not, why not?

I believe that the ‘sacred science’ was encoded in astronomy and architecture.

I am presently writing a book about this with Tom Brophy: Imhotep the African: Architect of the Cosmos

My question, why would the vents in the Queen’s Chamber be blocked at the time of its creation, and what’s your thoughts of the reasons for the blocking doors in the vents?

Robert Bauval:
That’s a very good question. When, and if, we can aswer this, I think the major mystery of the Great Pyramid will be solved.

What is obvious is that the creators of the shafts in the QC wanted to conceal them… but perhaps only enough for them to be found at some more appropriate date?

Perhaps we’ll know when finally the doors at the end of these shafts are opened….

1. I only recently learned of the Cygnus – Giza correlation. It looks very good, but I don’t believe that it necessarily means that Orion Correlation is wrong. Do you see room for both correlations?

2. My take is that the OCT is very reasonable hypothesis – theory based on three grounds: the air shafts, the Pyramid texts and the overall correlation of the three pyramids to the Belt of Orion, which is sufficiently close.

This is all that is needed, in my opinion, to make a compelling case for the OCT, independently of whatever problems may have been exposed regarding the back-dating to 10.5k BC and the original software you used.

Robert Bauval:
The matter of Cygnus was discussed at length on this and other message boards several years ago.

The Cygnus stars may fit the layout, but there is no context. I know Andy Collins believes there is, but I have looked at the matter in great detail, and the dwn-nwy figure cannot be Cygnus. And even if by a stretch of imagination it was Cygnus, there is still no textual support in the Pyramid Texts, or archaeological support such as the shafts and the position of the Sphinx, and geographical support such as the relative position of the Nile.

But I must not linger on this, as people will say I am biased.

I’ve been reading different English translations of Plutarch’s “Isis and Osiris” and in versions by both Charles William King and Frank Cole Babbit, we read:

“For Egypt was once sea; for which cause many places in the mines and in the mountains are found to contain shells to the present day; and all springs, and wells, whereof there are many, have their water brackish and bitter; as though being a stale remnant of the former sea which had collected there.”

A couple of things, really:

1: Has this statement been substantiated by archaeological finds?

2: If so, does the archaeological evidence indicate the date in Earth’s history when this event happened?

Robert Bauval:
Yes, the statement by Putarch is correct: Egypt was a ‘sea’ millions of years ago. In the Western Desert fossilized seashells abount, and they even found skeletons of whales.

Here’s my question: Regarding the concept of legacy in Ancient Egypt (i.e. supposing there was a pre-dynastic civilized age, as the ancient egyptians recorded in their lists of kings), are you aware of Albert Slosman’s works? In summary, he focused his research in North Africa and Dendera, and he reached the conclusion that Egypt had been the final destiny of Atlantis refugees. He called Atlantis “Aha-Men-Ptah”, following Dendera’s zodiac texts, and he said they had a high astronomical knowledge, and could predict global disasters, so they could escape a great cataclism, which Slosman calculated in an accurate date: july 27th 9792 BC. He also considered that the hierogliphs had been misunderstood -or not correctly translated- since the times of Champollion.

What’s your opinion about these claims?

To be very honest, I am not a believer in Atlantis. But I do think civilization is much much older than the date ascribed by scholars.

I am working on a book with Tom Brophy that will argue this point.

Meanwhile, perhaps you might care to read our book Black Genesis.

It would be of umost interest and well apreciate to know your opinion about
the ancestral connections between pre-dynastic Egyptians and the
Caucasus, which is proposed by Ronnie Gallagher who in turns cited
also Sir William Mathew Flinders Petrie on this hypothesys.

here is the link to his article (of last 14th July) appeared in the section “Articles”:

Azerbaijan: Land of Fire and Flood Ancient Mariners and a Deluged Landscape

Robert Bauval:
The evidence is overwhelming in favour of a Saharan culture being at the origin of the Egyptian civilization. I discussed this issue in great detail in my book (with Tom Brophy): Black Genesis.

We are presently working on the sequel, which brings further evidence of a Saharan origin for ancient Egypt.

There was other influx later, of course, from the East and the Levant (and much later from the West) that slowly merged and created the ‘Egyptian ethnic strain’ that is seen throughout Dynastic times.

I am of the opinion that the Great Pyramid was a multi functional construct that encoded various sciences, and one function was some sort of quasi metaphysical function with selected individuals , and the Kings chamber specifically could have been the chamber where these selected individuals were taken to experience out of body states via laying in the water filled coffer.
The shafts direction to those past star positions as you have revealed in your books is a clue i feel to what may have gone on in the Kings chamber with these selected individuals, and so what i am about to suggest is a little delicate, i have noticed that the opening of the Kings chamber shafts starts at 33.25 inches above the floor, now is it just a coincidence that the average mans phallas is positioned about 36 inches up his body from the floor, maybe more for taller people.
Could this have been some sort of seed offering to the stars , apart from the geometric function that i have found in my drawings?

Were they in some symbolic way trying to mate with their Gods ?

Robert Bauval:
The idea of a fertility ritual using the shafts in the Great Pyramid was discussed by me in an article published in 1990.

See: Robert Bauval ‘The Seeding of the Star-Gods: A Fertility Rite in Cheops’s Pyramid?’ in Discussions in Egyptology No.16, 1990.

You can read the article also in Appendix 1 of my book SECRET CHAMBER.