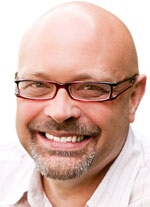 Tim has an honours degree in philosophy and is an internationally respected authority on world spirituality. He is the author of over thirty books that have established his reputation as a scholar and free-thinker. He became well known for his groundbreaking work on Christian Gnosticism with his close friend Peter Gandy, including The Jesus Mysteries, which was a top 10 best-seller in the UK and USA, and a ‘Book of the Year’ in the UK Daily Telegraph. For more information on Tim, see his full biography here: http://www.themysteryexperience.com/tim-freke/

Q. What frequency range would a person resonate at that would be considered to be in an awakened state?

I understand that there are different levels of awareness/consciousness but those people that are truly achieving an awakened state would surely resonate at a certain frequency (range) and if so has this been measured?

(Telepathy has been confirmed with science and monitoring the electromagnetic state of the brain during telepathic sessions.)

Tim:
There has been much research on brain states during meditation etc. And I discussed with various scientists some new experiments that will be carried out soon, which explore the correlation between brain states and awakening, whilst at the Science and Non-Duality conference where i was speaking a few months ago. However, this is not my area of expertise. My explorations of the ‘deep awake’ state have been primarily subjective. For me the most obviously sign of awakening is the all-embracing love that naturally arises. It is so strong it vibrates in every cell of the body. It is this love which makes me so drawn to the awakened state.

How do Tim’s theories or beliefs about non duality (?) tie in with a pagan origin of Jesus? Not that I am not open to that possibility or even probability, but what is the connection, if any?

Tim:
They don’t. The question of whether Jesus existed is an historical one, which can only be answered through carefully analysis of the information available to us. Awakening to oneness requires a subjective investigation of my own deep being, leading to a ‘deep knowing’ or ‘gnosis’ of what-is before words. The two are linked only in so far as the Gnostic Christians (who in my view created the Jesus myth) were interested in awakening to ‘gnosis’… and so am I.

How do you know for sure Tim, about your claim that there is no historical Jesus?

Tim:
I don’t know anything for sure. All historical claims are open to doubt. My view on the origins of Christianity arises from a careful analysis of the evidence and the weighing of probabilities. For example it seems more probable to me that the Jesus story is a new version of previous Pagan myths, than that God’s only Son came down to Earth and lived out these myths in person. But … heh … life is strange. Who knows?!

I’m very happy to get this unique opportunity to interview you on the GHMB, however, I must admit it took me a little while longer to come up with some (more) questions about your books since several were previously answered by your writing partner a couple of months ago! Anyway, here they are:

* What do you think of the Mandaeans (aka Nasoreans) and their connection to the Judeo-Christian religion?

TIM: I suspect that both the Mandaeans and Christian Gnostics are both arising from a common pool of ancient Gnostic thought, which is already widespread, disparate and varied.

* With the exception of the Mandaeans, all other Gnostic groups disappeared from history. Do you think there could of been some who went underground and/or survived into more recent times?

TIM: Yes. The Bogomils and Cathars popped up in the Middle Ages. Other Gnostic groups may have inspired the many secret societies that arose during the Enlightenment. I am not aware of any authentic lineage that has continued uninterrupted to the present day however. And given how things decay over time if they don’t evolve, i suspect if there was such a lineage it would have turned into something quite different by now.

* To be sure, the Jesus Mysteries was highly controversial among the orthodox Christian community. In light of that, were there any overly-negative repercussions/reactions to that book? If so, anything that you would do or say differently if you could do it again?

TIM: We haven’t had any death threats – but we’ve had lots of after-death threats! There’s a corner of Hell put aside for Peter and I, where we’ll be tortured forever … but a God of love!

I haven’t read The Jesus Mysteries for many years, but i feel we hit the right tone to both question the conventional history of Christianity and present a more accurate and inspiring account.

TIM: Great question. We suggest the Theraputae in Alexandria may be the origin of the Jesus myth. They were Jewish Pythagoreans who probably embrace both approaches. Having said that, i feel it is also possible that the myth was arising in various forms through different groups, because it had been around for many decades (perhaps centuries) before the supposed birth of Jesus. In which case the true ‘origins’ are lost to us.

* As you have written several popular books with Peter Gandy, I was wondering what some of the pros and cons of being a co-author are? Between being an author or a co-author, do you have a preference?

TIM: Peter and I have known each other since we were 10 years old and we’ve been exploring life together ever since. Sometimes we joke that we’ve been having one conversation for 40 years … and it is still fascinating us. He’s like a spiritual brother who is now my next door neighbour. This means we think in very similar ways, so working together is a delight. I trust his insights and he trusts mine, so we don’t find ourselves in conflict. I get the impression this is rare with co-authors however. Our first publisher warned us that if we wrote together we’d inevitably fall out .. but i am glad to say this hasn’t happened.

When i write on my own about awakening Peter is the first person who reads the manuscript to input his ideas and edit the text. He is very generous in this way. We enjoy each other’s exploration of this strange business we call ‘life’.

And speaking of co-authors, I’d be curious to hear your opinion about a couple of questions I asked your writing partner.

* Do you think there could be a common source for Judeo-Christian Gnosticism and Greek philosophy? If so, who?

* Considering that India is the original home of such spiritual ideas as enlightenment, reincarnation, and transmigration, as well as the fact that ‘Veda’ means “knowledge”, what do you think of Voltaire’s (and others) evidence for the patriarch Abraham actually being a Brahmin from India who migrated to Canaan? (Or if you think Abraham is mythical like Mr. Gandy, what do you think of Abraham being an allegory for a group of Brahmins from India who migrated to Canaan?)

TIM: Not sure. The gnosis is a perennial human experience of awakening, so it occurs in all cultures. Different cultures have created different philosophical approaches to awakening, and the Indian tradition is old and very deep. My sense is that the ancient world was far more connected through trade that we have previously believed, so that ideas are passing between cultures all the time, so an Indian influence is likely. However, it goes both ways. The impact of the Egyptian culture on the ancient world should never be underestimated.

Thanks for letting us interview you, Mr. Freke!

I have read both the Jesus Mysteries and the Lost Goddess. And thus, I only have 4 fundamental questions that speak to you, not your books.

1) Is there no clear evidence of the Godman Jesus in authenticated literary or archeological records?

2) Is the fountainhead of Sophia as a female deity in early Christianity documented?

3) Are there any connections between early Hindu, Jewish or even Greek ideas about this Goddess?

4) Later, in the 14th century in France, there arose the curious phenomena Catharysm and Bogomilism. What are your thoughts regarding their spirituality, their claims to being true Christians, their bravery of walking en masse into burning pyres, or the juxtaposition of Jehovah and Satan (as they claimed) in the Bible?

Tim:
1) There is no convincing evidence for an historical Jesus at all.

2) Yes. The Goddess is known by many names in different texts, many of which are in the Nag Hammadi collection.

3) Most likely they all arise from more a previous ancient religious tradition that left no written records. And ideas have always passed between different cultures along trade routes.

4) The Bogomils and Cathars seem to be a continuation of a form of ancient Gnosticism, hence their claim to be the true Christians. I don’t know what to make of their ‘bravery’. On the one hand it speaks of great courage in the face of persecution. On the other it reminds me of the terrifying cultish behaviour characterised by the followers of Jim Jones. The Cathars were often very world-rejecting. There were living at a time of casual brutality, so this is understandable, but today i don’t find this approach to spirituality attractive.

The idea presented in your new book is, as I understand it, that there’s a state of interconnectedness and bliss that we can slide into at times, and it brings us into awareness of “the big wow!”, where we become conscious of the beauty, magic and mystery of life.

I love getting into that state of interconnectedness and gratitude, but I always eventually slip out of it. Certain practices bring me there- my favourite being going into waterfalls in forests. Psychedelic plants also tend to have that effect, and it always lasts for a while – sometimes days, sometimes weeks. But maintaining it is the problem. What is your advice to stay in that level of consciousness?

Tim:
Waterfalls in the deep forest … that makes me feel WOW just reading it Luke!

It seems to me that consciousness is always in flux so there is no permanent awakened state. Everyday we become tired and need to dissolve back into deep sleep, before arising refreshed. Consciousness arises with energy. As the energy fluctuates, so do our states. However, we can nurture the deep awake state so we inhabit it more of the time … as we surf the ups and downs of life. In my new book i progressively outline a series of very simple but powerful practises that can facilitate our journey of awakening. Here’s one especially for you 😉

The simplest way to wake up is to remember to wonder at the breathtaking mystery of existence. The moment we do this consciousness starts to change. Wonder is an open doorway to a deeper state.

It is easier to experience wonder in a beautiful setting – such as under a waterfall in the forest. Or on psychedelics when our perceptions are transformed and we see the world in an utterly new light.

So my suggestion is this. Wherever you find yourself when you want to wake up, remember your experience under the waterfall … how it feels … the raw sensuality … the inexpressible beauty. And then look around you at the world before you with the same sense of wonder. It is just as miraculous. Life is always magical, even when it is also mundane. The simple fact that this vast universe exists and we are here to experience it is more wonderful than words can ever say. Become conscious of that and your state will start to change. You’ll remember you’re alive and how good it is to BE.