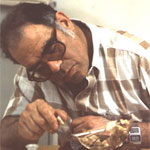 MILFORD H. WOLPOFF is Professor of Anthropology and Adjunct Associate Research Scientist, Museum of Anthropology at the University of Michigan. His work and theories on a “multiregional” model of human development challenge the popular “Eve” theory. His work has been covered in The New York Times, New Scientist, Discover, and Newsweek, among other publications. {source}

Questions and Answers below

1) Do you believe human progress was generally linear up to 2000 BC?

Evolution does not create progress, it creates change. Sometimes the change is adaptive, better fitting to the environment and you think that is a good description of humanity you can call it progress. I wouldn’t. If you are asking about human change, the last 10,000 years of it has been accelerating, anything but linear.

2) Are you aware of any pre-2000 BC writing which doesn’t require
extensive interpretation to understand?

Yes, but I’m not an expert.

3) Hi Dr. Wolpoff. We finally have proof through Svante Paabo’s group
that H sapiens mixed with Neanderthals and Denisovans. What do you
believe the relationship is between Denisovans and H erectus?

The Denisovans are much more recent than H erectus. They are very probably descendants of H erectus, and not the only descendants

4) I was wondering if you had any particular views on the use of
psychedelics by our ancient ancestors? As a user of the chemical DMT
and having taken it many times I am very aware of my place in the
history books now. This amazing substance has been consistently used
throughout history by our ancestors for the purpose of connecting with
the planet and indeed the universe at large. Your thoughts on this
would be very much appreciated.

My opinion is that human populations who found how to use foods that were difficult to obtain or process knew the environment well enough to find psychedelics. Don’t wait for fossil proof, though.

5) I would be very interested to know how variations between Homo
Sapiens Sapiens and Homo Sapiens Neandertalis compare to other
variations within a species.

I’ve written a bit on this. Humans today are widely variable, but without enough population differences to be considered subspecies or races. This was not the case in the past where the total a mount of variation was similar to today but some populations were quite different from others, making subspecies. Neandertals in Europe and other human populations in Africa or Asia are an example of this. Simply put, there are no human races today, there were in the past.

6) I am blood type A- and have been told all sorts of crazy things
like Rh negative people descend from Neanderthals and Aliens. What is
really the cause of the absence of that Rhesus gene? Do genes just
mutate, get switched off, or can they totally disappear?

If they are rare enough, or if they have a bad consequence, they can disappear. They can also turn on or off.

Also I have
inherited Pernicious Anemia and am curious about the origin of genetic
autoimmune diseases. Does having a child with a person of a different
race cause more autoimmune, allergy, health related problems for the
kid?

no, not any more than havng a child with anybody else.

How quickly does the human body adapt to dietary changes such as
going from vegan to eating animal products? Thanks for doing this!

The African Eve idea – that we are all uniquely descended from a small group of Africans, is no longer believed – the multiregional interpretation holds

8) Out of all the numerous kinds of miniature humans chronicled in
myths from various cultures (trolls, elves, leprechauns, dwarfs,
goblins, little people, faeries, etc), why do you think the scientific
community nicknamed Homo Floresiensis the “hobbit”, a completely
fictional being?

Sense of humor? The hobbit appears to be a pathological individual (the pathology is having a tiny brain) in a population that is normally very small, even smaller on average than African pygmys.

Do you think scientists are intentionally avoiding
acknowledging the veracity of these myths or is it some kind of
general LotR geekdom?

Myths are just that, myths. With future discoveries, it is certainly possible that they have their basis in reality. After all the Greeks believed in a one-eyed colossus and this turned out to be based on someone finding the skull of a mammoth that lived there 10,000+ years ago.

On the flip side, given the wealth of
circumstantial evidence over the centuries, some cryptozoologists have
hypothesized that Bigfoot/Sasquatch/etc could represent the last
surviving remnants of Neanderthals, or some other type of hominid. Do
you think this could be possible?

yes, but if true probably an earlier hominid or related primate like Gigantopithecus. I’m waiting to see one, meanwhile its in the suspense account

9) I’d like to know if Dr. Wolpoff has read “Forbidden Archaeology” (CA UK US)

and what he thinks of it.

I wonder if he has run into the knowledge
filter in promoting his multiregional hypothesis.

10) There are many of us here that either believe or are at least
fascinated by the concept that civilization is much older than
conventionally believed and that evidence of that civilization is
likely to be found underwater in coastlines that were inundated at the
end of the last ice age. Whether one is a proponent of ancient
civilization theories or not these areas are largely unexplored. Do
you have any opinion of whether exploring these submerged coastal
areas might prove fruitful in unraveling the mystery of the human
story?

exploration would be very fruitful, not for lost civilizations but because those submerged coasts were migration routes when they were exposed during the ice ages.

11) And a quick follow up- do you find concepts such as civilizations
being older than conventionally understood to be a purely lamentable
‘junk science’ or is there any reason you might take a more open
minded approach?

No one can prove it wrong (mindful of the mammoth skull story), but I’d like to see evidence

12) Who would you personally pick to do an interview?

do an interview with? Do they have to be alive? If not, Mary Leakey – the heart and brains of the outfit. Among the living there are many, rally too many to list, but for an exciting time and a romp through many many ideas, I’d think of Carol Ward and Mark Flynn