Cusco: Where ancient history keeps coming back with more

Running some errands in Cusco last week, I stumbled upon an excited crowd of people standing around the fenced area at the top of Avenida El Sol, a central street in Cusco. I didn’t waste time thinking that the reason for their excitement was Peruvian workers jackhammering the colonial road. Anticipation of an archeological discovery begun to settle in. Getting closer, my premonition was confirmed.

Between hundreds of people staring at the newly uncovered site, I saw an archeological complex appearing from the ground. It took a minute to make a new friend; the archeologist in charge. Sharing with her my interest in the subject, I was given permission to actually get down into the site for a visual inspection. It was quite sobering to find myself in the middle of central Cusco, just feet below the familiar road which is walked on by millions of tourists each year. It is highly unlikely that while visiting Cusco, you weren’t walking this road yourself, knowing nothing about what’s been hiding below, frozen in time. The street under which the complex was found, called Calle Mantas, which connects Avenida El Sol and the Plaza de Armas, the main square in what is today called the historical center of Cusco. Inspecting the site closely, however, I was not impressed. I would hardly call it a major archeological discovery, much less a mind-baffling piece of architecture which would make one wonder about who built it and how, when and why? It was rather a typical Inca construction with stairways and walls which can be seen in many areas in the Cusco region. Struggling with disappointment, I began to see another meaning, more subtle and significant than the site itself. It was the contrast between the ancient world and ours, now overlapping one another in real time. It was surreal to see how the gap of 700 – 800 years has now been breached by a minor dig which wasn’t even meant to make history. Standing in the middle of it, while surrounded by the noise of busy streets, I thought about how much more knowledge is hiding underground while making history appear to us in pieces which are rather glued together with the silicon of theories than welded with the facts. This particular site didn’t seem to bear a great significance other than it served as vivid example of the cultural layers being swept underground by time.

How much more history is yet to be uncovered? I thought between the choir of cameras and chats. 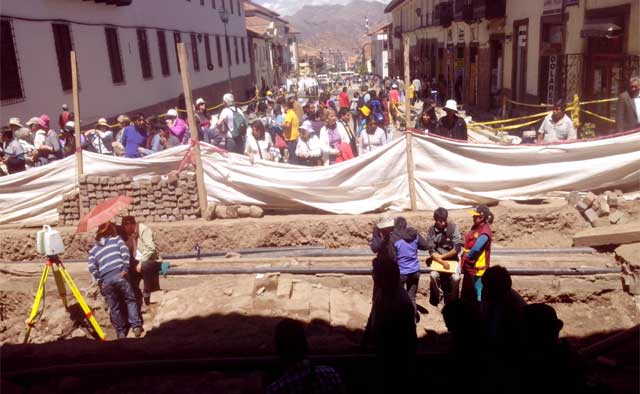 Almost hysterically, I begun to take pictures, thinking about the limited time I had been given before being asked to leave. Before leaving though, I had a chance to speak to the archeologist again and express to her my concern for this site being paved over as originally planned. This reconstruction project of the roads in central Cusco had begun a few months ago and still continues today replacing colonial bricks with new pavement. In fact, walking up the Avenida El Sol that morning before arriving at the newly discovered Inca ruins on the top, I thought about the loss of charm the streets have suffered due to the current renovation project.

I didn’t spare words in order to convey the importance of preserving this site and leaving it open so it can serve as a reminder of the Spanish conquest of Peru for future generations.

– The new road didn’t matter, I said to an archeologist, compared to this finding in the middle of the city. People don’t come to Peru to see paved roads, I continued, they have better ones at home. They do, however, come because they hear the ancient voices echoing through silent pictures, calling them to ponder our human past. 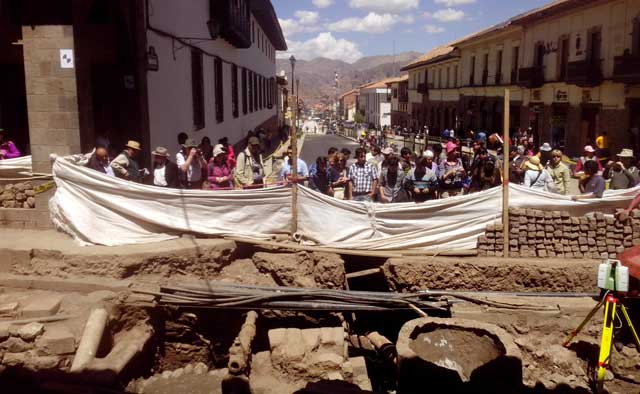 The archeologist agreed with me and added that this, unfortunately, wasn’t her decision.

Feeling some sadness inside, I thought about writing few worlds on the subject.

While taking pictures, I realized that I will never be able to transmit the atmosphere of that experience. Leaving the site, I crossed the road to the main square and sat on a bench to ponder the event, while watching the ever-growing crowd around the site. In my book I have written about the brutality of the Spanish conquest and its implications for the native culture. But that feeling which I experienced while standing at the site and looking at the proudly rising Cathedrals built on the top of the Incan city, which signify triumph, could not been printed on paper, nor could be shared in words. It was a feeling present in the hearts of conquered people centuries ago.

Sitting on the bench I thought about human vices which are everywhere and always the same. How is our world today different from the world we are seeing underground? The only progress I can see is in the tools and means of conquest, not in morals. We are in fact, still a barbaric people who are in urgent need for renaissance.

What will it take to learn from the past and see that we repeating the same mistakes today as we are moving forward? Is there a safety, peace and happiness which can be found in the world which ran by the lust for gold and domination, religious fanaticism and spiritual void; the seeds of misery and cause of pain? This took me deep into the debris of medieval ages and even further into the human soul from where the cool Cusco evening breeze finally brought me back.

Going home I thought about all those people who visit Peru each year in search for answers, some of them perhaps being unaware of their inner quest. Looking at their faces at the ancient sites and other places, I often see a genuine search for something real, something on the subconscious level they know exists. In this, I thought I saw some hope in motion and a sort of guarantee for preservation of the ancient world, as well as the ticket to a human future which is already pulsing in its embryo, with wonder in its blood.