We all have heard the official story about how Christopher Columbus discovered America merely by mistake. But giving it some thought, I wonder if there is another side to the story. Considering the fact that celestial navigation was an ancient science known and used to navigate on the sea, what would be the chances of the ‘’Admiral of the Ocean Sea’’ chosen by the Spanish Crown for the treasure hunting voyage, getting lost and sailing in the wrong direction?

It seems like the chances are rather slim. Would it be too far of a stretch to suggest that Columbus sailed according to the maps held in his possession which could either be originals or copied from originals made by ancient people who knew the globe?

Before dismissing this as a possibility lets contemplate a few facts:

Looking at the ancient world of Peru, Mexico and Egypt (and it’s reaching further but this is where I’ve been so far) one cannot help but wonder about the similarities which are seen among these cultures. All of them built pyramids and megalithic cities, playing with the stones like children play with clay. All revered the stars and had the knowledge of astronomy, made observations of the celestial bodies and understood their annual movements. All mummified the dead and tattooed mummies (1) (2) (3). And last but not least, all used the language of symbols, which we only now are beginning to understand.

What particularly interesting regarding the construction of the ancient walls is the L-shaped cornerstones used to unite intersecting walls found in Peru and Egypt. The question that naturally arises is how the Incas of Peru could implement the same construction style seen in ancient Egypt? 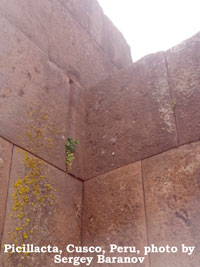 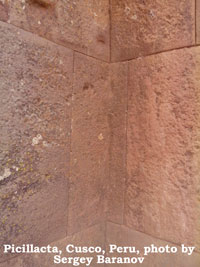 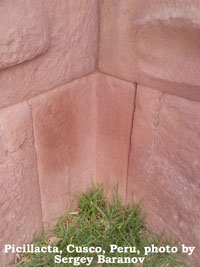 Needless to say, when we look at ancient Egypt, for example, beside the incredible stone work which has been ascribed by conventional science to the work of oppressed slaves using primitive hand tools, we see an expression of highly artistic minds and work of a genius who reached immortality through timeless architecture they left behind which is seen today as an archetype of ancient art.

Whether these achievements could occur during the dark ages or were a product of the epoch of the renaissance, is another subject. Here we only speak about striking similarities between the architecture, cosmology, religious customs and linguistics, seen in ancient cultures separated by the Atlantic Ocean.

How was it possible that the same ideas, understandings and beliefs were shared among cultures unknown to each other?

Inca legends tell us about the great flood once seen in the Andes. We also find reference to the flood in the Bible. Regardless of whether the Incan mythology and biblical tale were describing a real event – it is yet another thing in common.

How many more puzzles do we need to put together before we begin to see the bigger picture and realize that an advanced civilization existed in the past?

What made the ancient people great is another question and certainly a matter of debate. But what’s already clear is that the gaps in history exist and are covered with the accepted narrative of mainstream science.