Have you have ever heard of the Hammonasset Line? Probably not: I hadn’t.

The Hammonasset Line, which starts at Montauk on Long Island, goes through Connecticut and crosses over into New York State, is comprised of pre-colonial stone structures that are theorized to be many thousands of years old. Cairns can be found as well as formed Cairns, unusual walls, marking boulders and travel ways; all found along the line through many townships. The Line marks both the winter solstice sunrise and summer solstice sunset. In Connecticut, the line has been useful for predicting and locating sites where many ancient stone cairns and structure have been found. 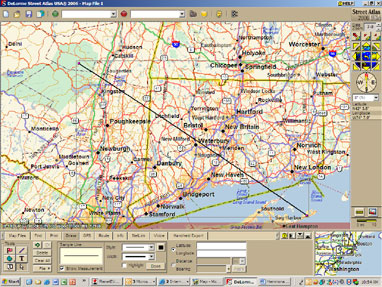 After rediscovering the alignments, researcher Charles Thomas Paul extended the Hammonasset Line and discovered it aligns with the Devils Tombstone in Stony Clove between Phoenicia and Hunter which too, apparently orients toward the summer and winter solstices along this line.

After crossing the Hudson River and passing through the town of Saugerties, the Hammonasset Line runs across the eastern most part of Woodstock before ascending the eastern slopes of the Overlook Mountain, crossing into Green County and heading into the Catskills towards Devils Tombstone. The line crosses into the Catskill Mountains at a point near the southern terminus of what was said to have been referred to by local natives as “The Wall of the Manitou” an imposing buttress of sheer mountain walls, running north and south between Woodstock and Catskill, and directly facing the Hudson River Valley to the east.

According to Native American author and Marist Professor Evan Pritchard (Native New Yorker, 2007) the “Wall” represented a separation between the real and the spiritual worlds and journeys up or beyond the mountains were seen as journeys toward Heaven. And, the further up you journeyed into the mountains, the higher level of Heaven was attained. Manitou was the 12th or highest level. This cultural belief of multiple levels of Heaven has correlations with peoples from other ancient cultures from Indian Rishis to Egyptian Priests and even in Christian scripture. There’s a good reason the Tibetan Buddhists choose near the top of the Overlook Mountain in Woodstock for their monastery.

Interestingly Professor Pritchard has identified a standing stone just north of Rt. 212, between Woodstock and Saugerties across from a pond, which he believes sits on the Hammonasset Line.

Having the Hammonasset Line pass through Woodstock and Saugerties seems to put our geographic area in good company with many other sacred sites that have markers aligned with the yearly solstices, including Newgrange in the Ireland, Uaxactun in Guatemala, Palenque in Mexico, and the Temple at Karnak in Egypt. 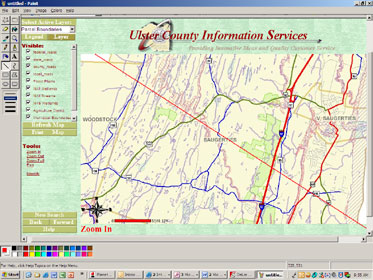 The New England Antiquities Research Association, NEARA http://www.neara.org/ is an organization I’ve belonged to for a few years now and I’m becoming more actively involved in their research. The Hammonasset Line is of particular interest to me because it actually crosses through our area and seems to come very near cairns identified on the Overlook Mountain as well as other stone markers in the valley below.

The stone works along the Hammonasset Line are considered to be memorials or burial markers aligned with the position of the solstice sun and may suggest some sort of widespread burial cult or ritual, in practice during the Woodland and perhaps Late Archaic Period. Since the line is dated to around 5000 years ago, a time when Sun worship was at it’s height in places like Egypt and the British Isles, I thought this an interesting coincidence given that some believe the Egyptian cultural influence may have spread worldwide during that civilization’s high point around 2500 BCE. 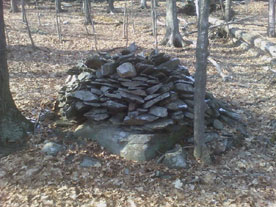 So, the details of the theory make the claim the Hammonasset Line, which begins at a burial complex near the tip of Long Island, runs to Devils tombstone in Greene County, New York and I have confirmed this. I’ve plotted the line using computer mapping software. From its’ starting point on Long Island (Fort Pond Hill in Montauk) to Devils Tombstone, the line follows 318.5 degrees NW (magnetic north) or 304.25 degrees (true north) from Montauk when accounting for the 14.25 degrees declination (the calculated difference between true and magnetic north at Montauk currently, when true north = magnetic north – declination). Remember, since the Earths magnetic field drifts over time, magnetic north would have been slightly different hundreds or thousands of years ago by up to .75 degrees.

On my maps, it looks like the line crosses the eastern most corner of the Woodstock Township then heads over the slopes above West Saugerties Road, where I believe other cairns have already been discovered. Following the line along the 318.5 degree magnetic north bearing from Montauk, as the line intersects Woodstock and enters the mountains; it parallels Devils Kitchen (Platte Clove) along the summits just to the west before nearly bisecting Stony Clove at Devils Tombstone. This is the path and point where the summer solstice sun sets from Montauk and that has not changed. Plotting the alignments on the Earth surface would show a slight change, but in the woods and fields and on the ridgelines, alignments would still hold true today as always. 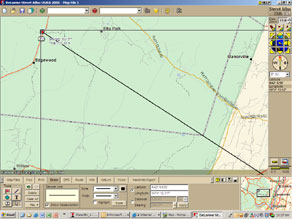 Where the Hammonasset Line extends to the Devils Tombstone at 318.5 degrees NW from Montauk, NY

Now, just for the fun of it and still using computer mapping software, I continued extending the Hammonasset Line, following the 318.5 degrees (magnetic north) bearing from Montauk on Long Island which, again, is the point where the summer sun sets on the longest day of the year and where the winter sun rises on the shortest day. It is surprising and curious that the line leads to an area in Michigan’s Upper Peninsula known for ancient copper mines believed exploited by foreign visitors to North American shores thousands of years ago. (Another coincidence? See Barry Fell’s America B.C.).

Even more curiously, the line crosses a small mile wide island of the far eastern tip of the Keweenaw Peninsula, in Michigan, called Manitou Island and then goes on through Isle Royale at the US/Canada border. Both these islands and the Keweenaw Peninsula are places known for Native American cultural activity dating back thousands of years. And, as is known, the word Manitou relates to the Native American spirit and is usually associated with a spiritual quality, quest or journey. 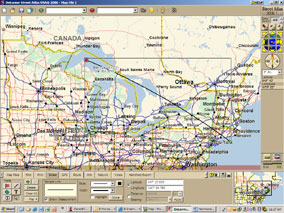 Hammonasset Line extended to Michigan UP 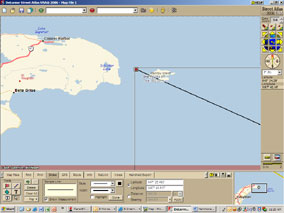 Manitou Island off the Keweenaw Peninsula

This may all be just coincidence but there could be something more to it and it has piqued NEARA’s interest.

In the next few weeks [time of writing April 2007] a group of researchers, including NEARA NY State Coordinator Polly Midgley and Princeton University Museum Art Conservator Norman E. Muller intend to examine the stone cairns on the Overlook Mountain in Woodstock. The group will survey, measure and photograph the several dozen mounds that have been identified, search for clues to their age and origin and determine how close to the Hammonasset Line they actually lie. And, NEARA members and researchers with friends and collogues in Michigan are pressing their contacts there for information and reports from that area.

One very significant point is that this line, the Hammonasset Line, if plotted properly, points directly to the Catskills and specifically to the Overlook Mountain all the way from eastern Long Island. This fact should help confirm the spiritual importance and high reverence the natives and others must have held in the mountains and their lofty summits. I believe this is important and should be remembered, researched and documented, with an attitude that honors the pre-colonial stone work found along the entire length of the Hammonasset Line and elsewhere.

I think this all plays well into the theory of my friend, NEARA member Dave Holden that the Woodstock valley was once used as a funeral zone by the Native tribes whose territorial borders shared our region and who created burial memorials placed in a systematic way along alignments. And, it might be suggested further, and the Hammonasset Line seems to support, that the ritual of burials along a line or grid of lines associated with the winter solstice sunrise and summer solstice sunset, may have been widespread and suggestive of a type of burial cult in the Northeastern United States (and perhaps further) that carried out such practices for thousands of years.

One thought on “The Hammonasset Line”