Are our governments developing a secret technology to control the weather? Glenn Kreisberg investigates.

By the end of the last hurricane season, 30 November, several news sources made the observation that NO major hurricane struck or threatened the US during 2006. A quick check of weather records shows that this is a somewhat anomalous event with very few occurrences historically. Of course anomalies of science and nature demand our attention in an attempt to discover an explanation for and understanding of, the unexplained.

In 1997 US Secretary of Defense William Cohen made the following statement, “Others (terrorists) are engaging even in an eco type of terrorism whereby they can alter the climate, set off earthquakes, volcanoes remotely through the use of electromagnetic waves….So, there are plenty of ingenious minds out there that are at work finding ways in which they can wreak terror upon other nations…It’s real, and that’s the reason why we have to intensify our (counterterrorism) efforts.” If you think about it, that’s actually a pretty scary statement coming from a sitting Secretary of State!

And consider that if our government believed terrorists were engaging in these pursuits back in 1997, you can sure as well assume our government, for good or for bad, is currently well along in pursuing these abilities as well.

Now, there is a gentleman named Richard C. Hoagland who knows something more about all this. Hoagland is a scientific researcher with some clout. He was technical science adviser to Walter Cronkite during the Apollo missions, worked with Carl Sagan developing the message discs placed aboard Pioneer spacecraft and has had a close working relationship with NASA’s Jet Propulsion Laboratory for many years. Hoagland’s own independent research group is called The Enterprise Mission.

Hoagland claims among other things, that after scouring hundreds of hours of satellite radar images from a variety of sources, he has documented a phenomenon which he believes is evidence that someone or something is affecting the path and intensity of tropical storms and hurricanes in the Atlantic Ocean. As Sci-fi as that sounds, the evidence is quite compelling.

Radar images of Hurricanes Ophelia, Rita and Wilma from Sept and Oct., 05 are shown as examples on the Enterprise Mission website. http://www.enterprisemission.com/weblog/weblog.htm 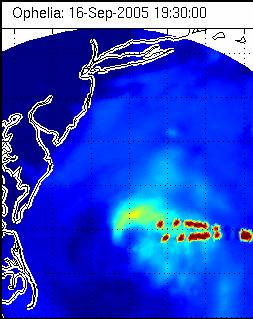 The Satellite image loops of the storm tracks indicate some anomalous and erratic behavior in the path and intensity of the hurricanes. Satellite images of hurricane Ophelia are especially intriguing to say the least. They show Ophelia well organized as a strong category 1 storm off the southeast coast of the US. Over very warm late season open water, the US Weather Service predicted a category 4 storm within 24 to 48 hours and the westerly path of the storm track had it headed for landfall along the mid Atlantic coast.

Instead, in less than 12 hours the storm had changes course and dissipated completely. The radar image shows something very strange occurring to the storm. As the storm tracks west towards the US east coast, the satellite precipitation image reveals two extremely heavy, nearly parallel bands of precipitation emanating, in waves from the east, directly toward the eye of the storm. As these heavy bands of precipitation intensify over hurricane Ophelia, the storm begins to change course, dissipate and is quickly extinguished. The effect is quite dramatic and not at all natural looking. The fact is, intensely heavy bands of cool rainfall falling on the eye of a well organized hurricane, through which the warm waters of the ocean below rise to provide energy and circulation to the hurricane, would have the effect of interfering with that energy flow and for all practical purposes starving the storm of its’ fuel.

Hoagland describes the dual heavy rain bands as taking on a “tuning fork” interference pattern that moves in lock step with the eye of the storm.

It is Hoagland’s contention “…based on the physics of these images that these bizarre ‘tuning fork’ patterns — note, geometrically aimed at the precise centers of these respective storms! — are actually a “rainfall side-effect” of an unseen energy technology being applied to these respective storms … in an effort to decrease both their wind velocities, and to simultaneously alter the storms’ tracks themselves.”

As a Spectrum Engineer I see some merit in this EM “energy technology” explanation, but I believe Hoagland’s “rainfall side effect” may actually be the main desired effect, given that enough intense cold rain from above, on the storm, could act as a blanket on the storms fire and have the effect of the storm rapidly raining itself out. As I’m no metrorologist, this is mere speculation on my part.

But could this effect possibly be attained using electromagnetic waves? Consider that research indicates, and it’s not unlikely, certain frequencies of high intensity EM fields could have the ability to separate molecules or break up molecular compounds. This could be used for such things as say separating H2O from air allowing the water to fall. It seems this would be more plausible over open water than over land as water vapor levels and atmospheric conditions over large bodies of water would seem more conducive. And I’d like to think that if this technology does exist, and did work over land, it would be used to address drought conditions worldwide where and when they occur, and not just to save Washington D.C. when and if it’s threatened.

So, think about what it means if the government does have the secret ability to control the weather in some way, which I believe they may and which Secretary Cohen seems to suggests. After what happened with Katrina last year, could you not see an order coming from high up to deploy and apply this technology to help prevent any future Katrina like events from ever happening. Politically, it would be the smart thing to do. And if for some reason the threat from killer storms like Katrina diminishes, when all the “experts” have been saying these threats will only increase, we must all scratch our heads a little and wonder who or what may be controlling our weather?