This is part 4 of researcher and writer Brien Foerster’s regular column here at Grahamhancock.com. Brien’s study and insight into the Inca’s ancient origins shed a new light on that famous South American culture. The implications are both startling and far reaching suggesting a connection to a pan Pacific civilization reaching back to mankind’s most distant past. Join Brien on the GrahamHancock.com Mysteries Message Board where he will be conducting a continuing discussion surrounding his research and regular contributions to these pages. Please check in for the next installment from Brien.

The vast majority of visitor trips to Peru go something like this; land in Lima, the capital, tour around the city for a day, and then fly to Cusco. Once there, while adjusting to the 12,000 foot plus altitude, a walk through the historic city center is a must, and then, the next day, take in Sachsayhuaman, the “fortress” of the Inca perched on a hill overlooking the city.

But the main attraction still awaits; a fabled “lost city” abandoned by the Inca in the 16th century, its location outwitting the Spanish Conquistadors lusting after any gold they could snatch, and then found by a lanky American scholar, Hiram Bingham III, in 1911.

Do I even need to name the place? Okay, Machu Picchu, Quechua words that mean “old bird” or “old peak” and a name that Mr. Bingham used casually at first, because he had been told by Natives of the area that Inca remains could be found in the vicinity of Machu Picchu, the name of the mountain upon which much of the site rests. The name stuck, and has been used ever since by the 2000 plus tourists that visit it every day, 365 days of the year.

So, after perhaps a visit to other Inca centers such as Pisaq, mainly to cruise through its famous “Indian market”, back on the tour bus or into the taxi one goes, destination Machu Picchu, or more correctly, the train station that links Machu Picchu to the outside world.

This place is called Ollantaytambo, and there happen to be major Inca stone works there, so why not have a visit, for say an hour or two, before catching the train?

Unfortunately, this is the most common scenario that I witness; and not that I blame the visitor, because the tourism business model of Cusco is to hype Machu Picchu to the maximum, while all of the other great Inca works sit in the shadows. Oh, by the way, are you aware of the fact that the real name of the “lost city” is Yllampu, meaning “resting place of the gods?”

Ollantaytambo is, from a historical and symbolic point of view, equally as significant as Yllampu, but it needs a better publicist. It is an immense complex, covering 600 hectares, and in fact takes up much of a valley, next to and in fact including the Inca era village that shares its name. 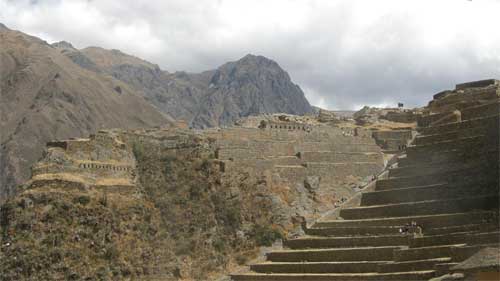 And what does Ollantaytambo mean, anyway; doesn’t sound as exotic as Machu Picchu, and a lot harder to pronounce? It was named after a warrior named Ollanta, whose family, the Anta, were lords of the area during Inca times. They were related by blood to the royal Inca line, but not full blooded themselves. 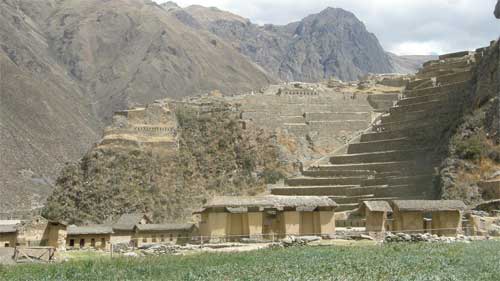 Ollantaytambo: Temple of the Sun and andene. Photo by Brien Foerster

Ollanta, unfortunately for him, fell in love with the daughter of the Sapa (high) Inca of the time, either Pachacutec, who ruled from 1438 to 1471, and was the great builder of Yllampu, or his successor Tupaq Inca Yupanqui (1471 to 1493.) As Ollanta was a noble but not a “true” Inca, the love affair was forbidden, until events took place by which he saved one of the royal sons of the Sapa Inca from the evil clutches of, most probably the Chanka people of the Apurimac region near Cusco.

It is probably the result of this heroic deed that gave Ollanta not only the hand of daughter of the Sapa Inca in wedlock, but also resulted in the town and complex being named after him.

The more formal and ancient name of the complex, is believed by F.E. and Edgar Elorrieta Salazar, in the book “Cusco and the Sacred Valley of Peru” to be Pacaritanpu, “House of the Dawn” or “House of Windows.” This should not be confused with the small town, near Cusco called Pacarectambo, from which erroneous stories have been written stating that it was from here that the Inca originated.

In fact, Pacarectambo was not founded until after 1571, almost 40 years after the beginning of the Spanish “conquest” of the Inca. Yet, many tour guides in Cusco, and some scholars, still point to this little town as being the Inca birthplace.

What is curious is that the Spanish chronicler Sarmiento (1572) who was possibly the first European to write about Pacarectambo, consulted with, according to him, 42 Quipumayoc (readers and recorders of the knotted cord system used by the Inca called quipu) who all told him the same lie! It is quite possible that they were misleading him and others, in order to save what little sacred knowledge was left of the Inca. And this included the true site of the House of the Dawn, which was Ollantaytambo.

And why should we care about this anyway?

What is intriguing about it, is that it means that a place outside of Cusco, for a certain period of time, but in the vicinity, may very well have been culturally more important than the capital itself, and may in fact predate it.

For example, the Salazars write: ‘continuing along his way, Tunupa (another name for Viracochan, the great teacher who appeared soon after the Flood) arrived at a place which he called Cusco, and there he prophesized the arrival of the Incas. Then he traveled to the Sacred Valley, where he was lovingly received by the lord of Tambo. Here he left his knowledge engraved on his staff…’ 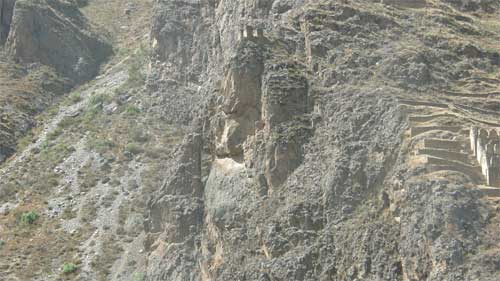 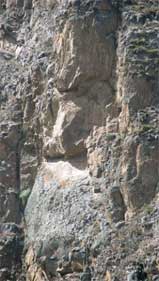 Close up of Viracochan (Tunutpa) profile. Photo by Brien Foerster

Another chronicler, Joan de Santa Cruz Pachacuti (1613) picks up the thread from there; ‘ the staff left by Viracochan (Tunupa) was transmuted to gold at the moment when one of the descendants of the Tambo lord was born. He took the name of Manco Capac and taking up the staff of gold, he directed his steps to the highest parts of a mountainous land where he founded the city of Cusco.’

What Pachacuti is saying here is that the first Inca, Manco Capac, did not come from Tiwanaku, near lake Titicaca, the presumed birthplace of the Inca, but from Ollantaytambo…

In 1542, the earliest Spanish report about the origins of the Inca and Cusco, written by Vaca de Castro, from information he obtained from an Inca Quipucamayoc stated ‘ …that Manco Capac, the first Inca, was the Son of the Sun and came out of a window of a house and was engendered by a ray, the splendour of the sun…then he went to the heights of a mountain where the valley of Cusco can be seen…and later founded the city.’

Again from the Salazars’ book we have this reference to a “window” of some kind that exists at Ollantaytambo: ‘…they trod upon the splendid valley of Yucay, today known as the Sacred Valley of the Incas (after having left Titicaca) and following the banks of the river that flows through it (the Willcamayu or Sacred River) they arrived at Tambo. There they entered the deep basements of the Pacaritanpu, which means “House of Dawn or House of Windows.”

The windows referred to seem to be the two depressions in the ground at the lower right corner of the photo. I saw them myself some months back, and they are now used as cornfields. If you look at this photo in it’s entirety, you will notice that it forms the shape of a pyramid, albeit with only two sides visible. 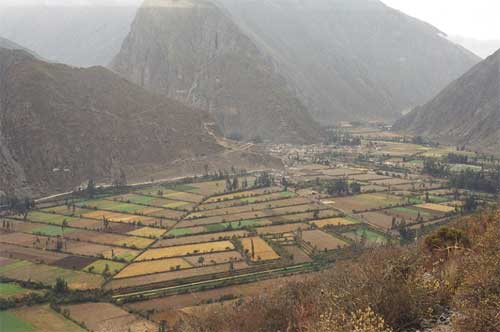 The 2 dimensional pyramid of Pacarictanpu. Photo from Bing Free Images

This intriguing “structure” is rarely if ever shown by guides to Ollantaytambo, mainly because most of them don’t even know it is there! And no one, in all of the research that I have done, has a clue who made it or when.

On the winter solstice of each year, June 21, the rays of the rising sun enter and strike the right one of the two windows of the pyramid. This coincides, more or less, with the celebration of the Inti Raymi, which is the Inca celebration of the rebirth of the sun, and of the history of the whole Inca civilization.

According to the Salazars’ interpretation of this event and effect, ‘the sun’s light entering this space symbolizes the union between the Sky and the Earth, and the “illumination” of its heroes is a product of its communion, which is why they were called the Sons of the Sun.’

Hence the name “House of the Dawn” has a double meaning, typical of many oral traditions; dawn as in morning, more specifically the morning of the display of the solstice, and dawn as in place and time of origins of a people; the Inca in this case.

It is my hope that Ollantaytambo no longer needs to take a back seat to any great Peruvian monument, and that more research will be done about it in the future. If academia is not up to the task, then I and others are.

There are many other features at Ollantaytambo which are seemingly of great antiquity and are not well understood, and have not been well studied by academia as far as I know. One is the 400 foot tall stone profile of the face of Viracocha (Tunupa) across the valley of Ollantaytambo on the side of Pinkuylluna mountain.

Another is the Temple of the Sun high up on the western flank of the Inca built andene (agricultural terraces) in the main part of the Ollantaytambo complex. Conventional archaeology states that was unfinished, but seems to give no explanation as to why. I think a more logical answer is that a massive cataclysm caused it to fall apart, with multi ton stones having been flung hundreds of feet away. 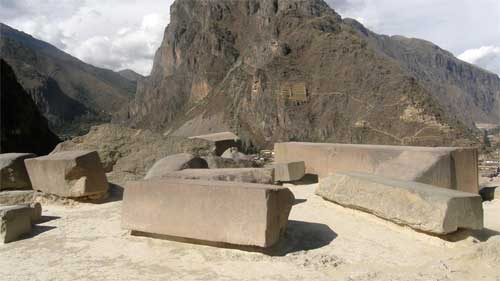 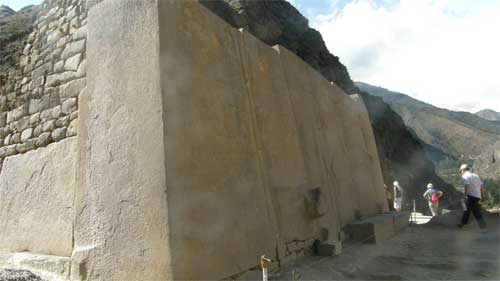 Temple of the Sun (remains of) and great wall at Ollantaytambo. Photo by Brien Foerster

And the Temple of the Condor, at the other end of the andene; with large andesite cubes having been removed from it’s surface by unknown means, leaving neither tool or even sanding marks. Also, there are ruins here, consisting of stone blocks of varying sizes, with planed surfaces and square depressions eerily similar to those found at Puma Punku in Bolivia. 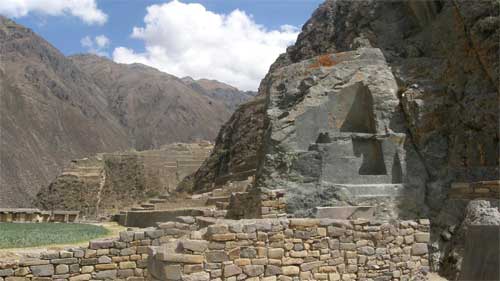 In my next article I would like to focus on the mysterious elongated skulls, not unique to Peru, and seemingly concentrated here. Examples can be seen in the small museum below the Coricancha in Cusco, and are labelled as being Inca, while others have been taken from digs at Tiwanaku; the proposed Inca homeland. Also, the largest and oddest have been found near Paracas, a small fishing town south of Lima on the Peruvian coast. I will attempt to show how all three locations may tie in historically.