This is one of researcher and writer Brien Foerster’s regular column here at Grahamhancock.com. Brien’s study and insight into the Inca’s ancient origins shed a new light on that famous South American culture. The implications are both startling and far reaching suggesting a connection to a pan Pacific civilization reaching back to mankind’s most distant past. Join Brien on the GrahamHancock.com Mysteries Message Board where he will be conducting a continuing discussion surrounding his research and regular contributions to these pages. Please check in for the next installment from Brien.

Four hours drive south of Lima Peru lies the Paracas Peninsula, part of which is an ecological reserve, where one can see wildlife such as sea lions, and a myriad of various sea bird species. The area is amazingly rich in seafood, and abundant fresh water exists just below the surface of the desert sands.

Therefore, it would seem to be a perfect place for people to live. Stone tools, of various forms and styles of shaping have been found in the area, and cursory analysis has established dates of as old as 8000 years. The greatest of Peruvian archaeologists, in my estimation, Julio Tello, made studies in this area in 1928 and performed excavations on the north side of the peninsula, in the central area of the large semi-circular bay there. He discovered and excavated a massive and elaborate graveyard, where each tomb contained an entire family, each one ornately wrapped in multiple layers of highly stylized, woven and coloured cotton cloth. He also found the sand filled remains of subterranean houses, which turned out to be numerous; so numerous in fact, that the village stretched out for between 1 and 2 km. 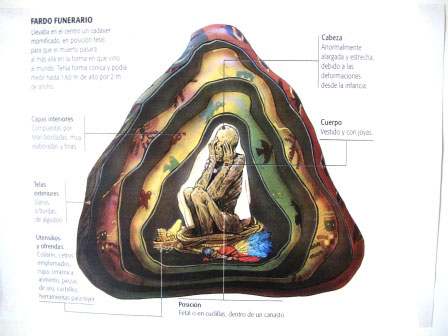 But, the most amazing finds were the skulls, some enormously elongated. The scientific name for this is dolichocephally. Most skulls exhibiting this condition were clearly the result of the practice of head-binding. And so how was this achieved? 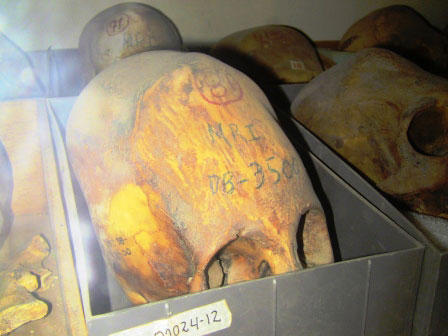 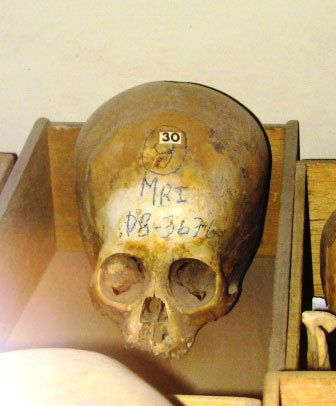 A very young child’s skull is pliant at birth, and remains in this way for months. It is therefore possible, by lashing a rope around the head, with a board placed at the back of the skull, and perhaps the front as well, to alter the shape of the head over time. Many authors state that the time period to perform this shaping was about 6 months to 3 years, but since the practice is no longer performed to my knowledge, no one really knows. Examples of this technique, supposedly last performed on infants in the Congo of Africa and the Island of Vanuatu in the south Pacific Ocean area known as Melanesia, well into the 20th century, have also been found in Egypt, during the Amarna period, Sudan, Iraq, Syria, Russia, the island of Malta, as well as many places in Peru and Bolivia, and amongst the Olmecs of Mexico.

What you are capable of doing via this technique is to change the shape of the skull, but not the actual volume; you can alter the shape, but not the size. However, Tello found several skulls, at least 90 at the site called Cerro Colorado adjacent to the main graveyard in Paracas, which had cranial volume larger, and in some cases 2.5 times larger than a conventional modern human skull. How is this possible? As I have said, deformation can alter shape, but not the volume of bone material, and certainly not twice as much. 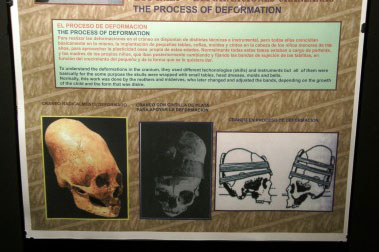 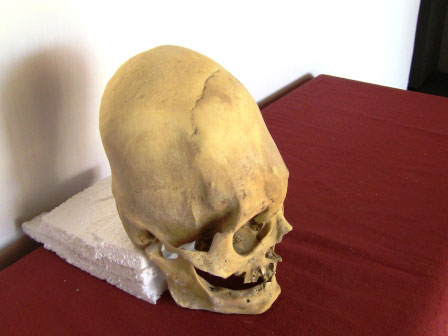 It is therefore obvious that we are dealing with 2 different phenomena; elongation through binding, and elongation via genetics. The Paracas skulls are the largest found in the world, but from what root race stock would they have originated? To suggest that the natural elongation was the result of hydrocephaly or some other clinical condition is ridiculous, when one takes into account that again, at least 90 of them were found by Tello, and no one knows how many are still under the earth, in private collections, or gathering dust in museum warehouses in Peru, and beyond. Hydrocephaly would tend to make the skull expand evenly, making them more round than elongated.

Tello believed that the Paracas were related to the people of the Chavin culture, who created the famous megalithic site of Chavin de Huantar, mainly based on the fact that he saw similarities in pottery designs and motifs, especially feline figures. However, to my knowledge, no elongated skulls have been found in the area where the Chavin lived, north of Lima in the Ancash district, so that clearly is not the answer as to their origins. But, since Tello was the expert and main archaeologist at Chavin, where he placed an origin date of at least 3000 years ago, he then simply applied this for the Paracas as well, and no one has dared or bothered to refute his time line until now.

The Paracas people, living by the coast, were clearly fishermen, as evidenced by netting which has been found buried in the sand, as well as ancient middens, which are heaps of sea shells. No actual and extensive carbon 14 dating has been performed on the organic matter of the archaeological sites, and this was certainly not done by Tello, as his work was performed in 1928, whereas carbon 14 dating was not established until the 1940s. Also, very little work has been done at Paracas since the time of Tello, and the subterranean houses have once again filled up with sand.

It seems evident, although unproven at this time, that the Paracas may be the descendants of an earlier culture that were sea farers. Since the Chavin-Paracas link set forth by Tello seems improbable, due to the lack of elongated Chavin skulls, it is a worthwhile hypothesis.

I went to the excavation sites, most notably those of the graveyard and adjacent village, which stretches and hugs the shoreline for supposedly 2.5 km, in May of 2011, with the film crew from the US based Ancient Aliens television series. All of the subterranean homes and graves had become filled in with sand, due to the constant wind, blowing in off the ocean.

The site of Cerro Colorado, which was the burial place of the priestly and ruling class of Paracas people, located across the main road which takes visitors through the ecological reserve, is strictly forbidden to visit. This is mainly due to the fact that huaqueros, or grave robbers, have been looting these locations since at least Tello’s time, mainly looking for clay pots, gold and silver figurines, and the finely woven fabrics which the Paracas are famous for having made.

Mr. Juan Navarro, owner and director of the local museum, called the Paracas History Museum, has a fine collection of artefacts from all of the cultures known and believed to have lived in this area, including the Paracas, Nazca, Chincha and Inca. Amongst his displayed collection of stone implements and clay pots is an elongated skull. Upon inquiring as to its age, he stated that he is a firm believer of the time line set forth by Tello, that the skull could possibly be 3000 years old, and not more recent than 2000. That is because the prevailing theory is that the Paracas people died out by about the time of Christ, having been absorbed into the Nazca, who were the next major culture to live there, spreading out from the area that bears their name.

What is intriguing about this, is that we see, from viewing the very large skull collection at the Regional Museum in nearby Ica, that the physical presence of the elongated skulls does dwindle as the time line of the Nazca progresses. This would indicate that either the process of head binding itself died out gradually, and/or that the genetic trait of the elongated cranium faded as fewer and fewer of the Paracas people existed. The Paracas people also seem to have occupied the Nazca area prior to the arrival of the actual Nazca tribal people, and may have been the makers of the famous animal figures on the Nazca plain; the lines themselves having been made later. Amongst the most famous of the figures is one called “The Astronaut,” and it is not only human like in form, but shows signs of having a less than normal shaped head. Whether this was the result of artistic license, or a realistic portrayal is not known. 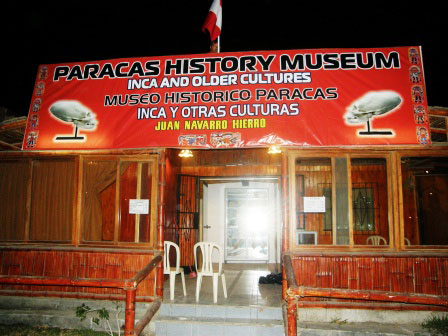 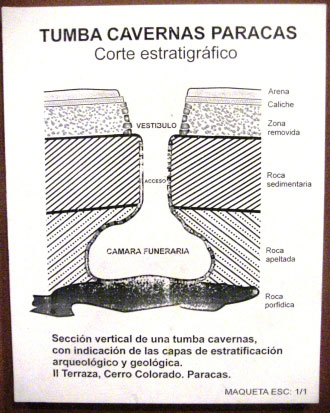 The only way to establish the actual age, and possible genetic origins of the Paracas people is through DNA analysis of the skulls themselves. Fortunately, Juan Navarro has a somewhat large collection of the elongated skulls in his possession, and just recently put them on display at his museum, due to my urging. Numbering at least 15, and collected as the result of the huaqueros leaving the skulls abandoned on the surface after looting graves, Juan has allowed me to take samples from 5 of the skulls. I was able to procure hair, including roots, a tooth, skull bone samples, and skin, and carefully documented the extractions with the use of high definition video; 10 samples in all.

The samples were sent to Lloyd Pye in the US, famous as the caretaker of the Star Child skull, who has now delivered the samples to his geneticist in Texas. We are hoping to get results of DNA analysis by late August, which we anticipate will give us information about the genetic root stock of the Paracas people.

As I have said, the phenomenon of the elongated skull is not unique to the Paracas area. The Egyptians, at the time of Pharaoh Akhenaton, seem to have exhibited this cranial feature, as did people on the island of Vanuatu in Melanesia, Malta in the Mediterranean, and the Olmec of Mexico, amongst other locations. However, as far as I know, most of these skulls are elongated as the result of artificial binding; whereas a number of the Paracas ones show specific characteristics that would seem to indicate that they were in fact born this way. Of the 5 physical factors, pointed out by Lloyd Pye and myself, which are not at all common to Homo sapiens, are two that I will mention. One is the presence of 2 small holes in the back of the skull, perpendicular to the cranial suture present in the parietal plate of the skull. Every normal human skull is composed of 3 major bone plates; the frontal plate, which ends at the upper part of the forehead, and the 2 parietal plates which lie behind this, intersecting the frontal plate making a “T” shape. The holes are thought by Lloyd to be natural; every human jaw has a small hole on either side which is for nerves and blood vessels to exit and feed the tissue there; these 2 holes at the back of the skull may perform the same function for the elongated skull. 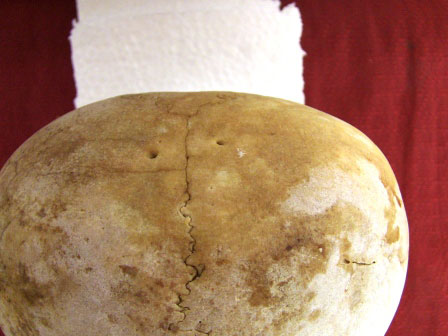 The other factor is that there is only one parietal plate, where there should be 2.

David Hatcher Childress and I are presently collaborating on a book, delving into the global phenomenon of cranial elongation. We presently have a working title of “The Enigma Of Cranial Dformation,” and are thinking of a publishing date after the release of the DNA results from Lloyd Pye, as well as the airing of the television series Ancient Aliens. Both are due out in August of 2011, and the book will be published some time in October. Juan Navarro has made me the assistant director of the Paracas History Museum, and I look forward to greeting any and all of you personally, should you wish to visit us, and explore the elongated skull phenomenon with us.