This is one of researcher and writer Brien Foerster’s regular column here at Grahamhancock.com. Brien’s study and insight into the Inca’s ancient origins shed a new light on that famous South American culture. The implications are both startling and far reaching suggesting a connection to a pan Pacific civilization reaching back to mankind’s most distant past. Join Brien on the GrahamHancock.com Mysteries Message Board where he will be conducting a continuing discussion surrounding his research and regular contributions to these pages. Please check in for the next installment from Brien.

The Ica stones are a collection of andesite stones found in or near Ica Peru, south of the capital city of Lima that bear a variety of diagrams. Some of them apparently have depictions of dinosaurs and what is alleged to be advanced technology, as well as representations of open heart, and other forms of surgery.

A subject of much controversy and heated debate, let’s go over the actual facts of the matter. In 1966, Peruvian physician Javier Cabrera Darquea was presented with a stone that had a carved picture of what he believed to be an extinct fish by a friend for his 42nd birthday. (1) Cabrera’s father had begun a collection of similar stones in the 1930s, and based on his interest in Peruvian prehistory, the younger Cabrera began collecting more. He initially purchased more than 300 from two brothers who also collected pre-Incan artifacts, and had claimed they had unsuccessfully attempted to interest archaeologists in them. Cabrera later found another source of the stones, a farmer from the nearby town of Ocucaje named Basilio Uschuya, who sold him thousands more. Cabrera’s collection burgeoned, reaching more than 11,000 stones in the 1970s. (2)

Cabrera published a book, entitled The Message of the Engraved Stones of Ica on the subject, discussing his theories of the origins and meaning of the stones. In it he argued that the stones show "that man is at least 405 million years old" and that what he calls gliptolithic man were humans from another planet, and that "Through the transplantation of cognitive codes to highly intelligent primates, the men from outer space created new men on earth." (3) The Ica stones achieved greater popular interest when Cabrera abandoned his medical career and opened a museum to feature several thousand of the stones in 1996. (4) It is still open, by appointment near the main square in the city of Ica.

In 1973 during an interview with author of such books as Chariots of the Gods, Erich von Däniken, the farmer Uschuya stated he had faked the stones that he had sold to Cabrera. (5) In 1975 Uschuya and another farmer named Irma Gutierrez de Aparcana confirmed that they had forged the stones they had sold to Cabrera by copying the images from comic books, text books and magazines. (6) Later it is said that Uschuya recanted the forgery story during an interview with a German journalist, saying that he had claimed they were a hoax to avoid imprisonment for selling pre-Colombian artifacts, which is a crime in Peru. In 1977, in the BBC documentary Pathway to the Gods, Uschuya produced an Ica stone with a dentist’s drill and claimed to have produced the patina by baking the stone in cow dung, as well as other simple and quite primitive processes. (7) He also said that he had not made all the stones. He was not punished, and continued to sell similar stones to tourists as trinkets.

Other engraved stones have been found within the Ica region. Archaeologist Alejandro Pezzia Assereto, a trustee of the Ica Regional Museum in the city of Ica conducted official investigations in the local ancient cemeteries explored by archaeologists Max Uhle and Toma Luz. Within three different tombs, they found engraved stones dating from 400 B.C. to 700A.D. The stones were embedded in the sides of the mortuary chambers. The engraved images exhibited in the stones include the image of a fish, a llama, and a geometric figure that is possibly a stylized flower. In 1968 Assereto published his findings, including drawings and descriptions. (8)

The stones have been used by some biblical Creationists attempting to show evidence of humans living in proximity with dinosaurs, a claim for which no evidence exists according to most archeology experts. (9) It has been reasonably well established that dinosaurs died out 65 million years prior to the existence of human beings. (10) Believers in ancient astronauts have also attempted to use the Ica stones as evidence of a lost, advanced civilization brought to man from other planets. (11)

In his Encyclopedia of Dubious Archaeology: From Atlantis To The Walam Olum archaeologist Ken Feder commented "The Ica Stones are not the most sophisticated of the archaeological hoaxes discussed in this book, but they certainly rank up there as the most preposterous." (12) By happenstance I visited the Ocucaje area where the majority of the Ica stones are claimed to have been found and made. I was exploring the area with Sr. Juan Navarro Hierro, director of the Paracas History Museum of Paracas Peru, north of Ica. We were looking for an obscure private museum supposedly containing elongated human skulls of the Paracas culture, which had died out about 2000 years ago. In order to get local directions, we stopped at the farm house of a friend of Sr. Juan’s, an elderly gentleman who had been a huaqero (tomb robber) many years previously.

As it turned out, this friend of Sr. Juan’s turned out to be Sr. Basilio Uschuya, the man claimed to have made and sold many of the so called Ica stones to Dr. Cabrera. Both he and his wife sincerely claimed that they had produced thousands of stones for Cabrera, and had examples in their house which we examined. Sr. Juan believes that all of the Ica stones are fake, the oldest having been fabricated in the 1960s. However, the only way to prove this hypothesis would be for a large selection of samples to be somehow tested by geologists and archaeologists from independent laboratories. 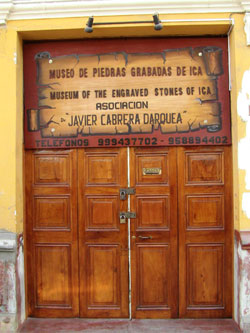 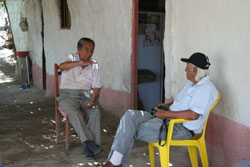 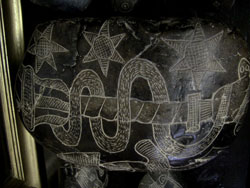 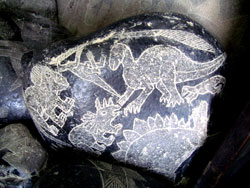 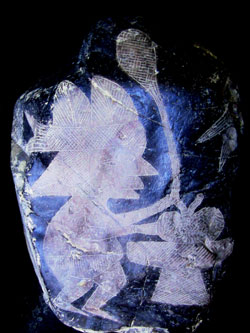 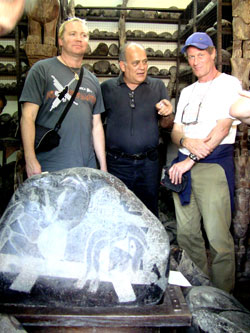 Discuss this article on the official thread on the GrahamHancock.com messageboards