It is our pleasure to welcome back Madeleine Daines, author of The Story of Sukurru and Before Babel: The Crystal Tongue, as our featured author for February.

Madeleine embarks on a quest that weaves and winds its way towards a greater understanding of the sacred language of Sumer and in doing so takes the reader on an adventure that unlocks the hidden doors of an ancient worldwide language, and its mysterious symbols that do not follow any modern grammatical rules. Madeleine’s important work in this area helps to piece together the puzzle of this age old language and takes the reader on a surprising journey of discovery into the deepest roots of knowledge.

The Story Of Sukurru Sumerian symbols and their true meaning

Before Babel The Crystal Tongue

Tradition assures us that mankind spoke it before the building of the Tower of Babel, which caused its distortion and, for most people, led to this sacred dialect being completely lost to memory.¹ 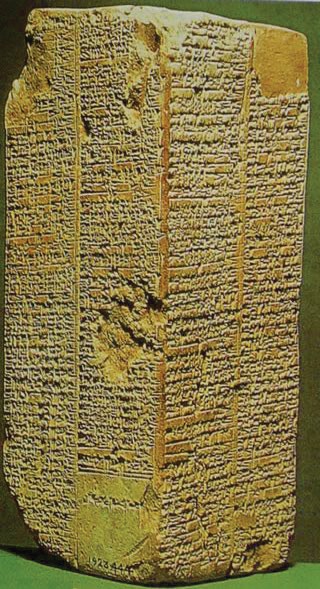 In 2015, I began a re-translation of the oldest literary text in our possession. Discovered on more than one Mesopotamian clay tablet and commonly known as THE INSTRUCTIONS OF SHURUPPAK, it was re- baptized THE STORY OF SUKURRU and published by me under that title in 2017. The two main reasons that led me to doubt the academic version are straightforward, are relatively easy to comprehend:

– First, the inconsistencies between two translated Sumerian texts. In the well-known SUMERIAN KING LIST, the names and places of kingship begin in a pre-diluvian age with reigns lasting for impossibly long periods up to the moment of a great flood. Symbols SU-KUR-RU-KI appear just before this tragic event on lines 31 and 32, and the resulting ‘Shuruppak/Šuruppag/Sukurru’ was correctly translated as a place name, identified as such by the suffix KI. The ETCSL version³ of that section (lines 31 to 39) goes:

– Second, an easy analysis of the opening symbols, UD-RI-A, which, through my monosyllabic method, translate to ‘day/sun–collect/gather– water/flow’. The official translation, considering the language to be agglutinative, groups them into one and delivers “In those days…”, leaving to one side all notion of ‘flowing’, ‘water’ or ‘gathering’. I took the symbols individually and understood that there was indeed an underlying reference to past times with UD but, with the contrasting MI- RI-A on the next line, there is also an opposition of UD, the day, with MI, the darkness of night. Taking the language to be monosyllabic, I understood those three symbols to mean:

By day, the water flowed and gathered. ⁵

This revelation resulted in a dramatic introduction that completely contradicted the subject of THE INSTRUCTIONS OF SHURUPPAK: “By day, the deluge”, the mention of a great flood that decimated the people of Šuruppag (Shuruppak/Sukurru). And confirmation of the veracity of that translation came in the SUMERIAN KING LIST where the great flood occurs on lines 39-40 at a time when the ‘kingship’ is in the city of Šuruppag. These completely different sets of tablets refer to the same event in the same place. They even have the same name, Ubara-Tutu, given as ruler of Šuruppag in one and translated to father of Šuruppag in the other.

Thus, THE STORY OF SUKURRU is shown to be the correct version from the outset. Contrary to THE INSTRUCTIONS OF SHURUPPAK, it not only makes sense throughout, but ties into the timeline, the event, the place and the name of the ruler given in the SUMERIAN KING LIST.

Despite breakages and some obscure sections, THE STORY OF SUKURRU is a mine of invaluable information about life in and/or potentially earlier than 2600 BC Mesopotamia. A few examples:

If THE STORY OF SUKURRU was, as a couple of the pictographic forms indicate, at least partially copied from one or more considerably older tablets, then the mind boggles; a relatively complete text of 280 lines, some or all of which dating from the first half of the 3rd millennium BC…or earlier still?

Although I had hoped, no doubt naively, that the validity and importance of my translation would be obvious through its own merits, the similarities with other existing stories, and its presentation as a bilingual book open to verification of the symbols and my method – it became evident from subsequent questions that it needed more explanation. And that is why I decided to write a second book. But it’s one thing to know where to begin a translation – at the beginning – and quite another to know how to kick off an explanation of an entire language, particularly a language that does not follow the laid-down prescriptive rules of grammar, a language that has been manipulated, tortured and stripped of its fundamental wisdom over millennia, a language that has already been explained away by more academically qualified than me. By the way, for those who might continue to prefer to ignore the evidence cited above and still dismiss my work on the grounds of my lack of formal qualifications in the matter, I have just two questions. Who gave the first experts their first lesson in early Sumerian grammar and on what authority?

On reflection, I decided to begin BEFORE BABEL THE CRYSTAL TONGUE at the most obvious point in linguistic history, with an analysis of the place names of Babel and Babylon through a Sumerian prism. If nothing more, it serves to explain the basic method of reading Sumerian symbols. Then, I took a close look at the famous Sumerian character, Enki, again through an analysis of the symbols that compose his name. From there, I moved on to Harran, a town in the south of modern-day Turkey and another name of Sumerian origin. It lies very close to the now famous, most ancient site of Gobekli Tepe dated to ca. 9600 BC. Gobekli is a different matter entirely, a disputed place name of Turkish origin, but I had already found signs of it along with the pagan Sabians of Harran in the process of translating THE STORY OF SUKURRU. The name Gobekli is analysed over several sections of my book. From that point, the journey of explanation and simultaneous discovery wove its way naturally from Mesopotamia⁷ to Ancient Greece for an encounter with Prometheus and Talon, and on to Ancient Egypt where Thoth once reigned supreme.

Finally and surprisingly – even to me – the ship of discovery made a great surge forward in time and landed in medieval France, in a region known best (most recently through the fictional DA VINCI CODE) for the mysterious village of Rennes-le-Chateau. Chapter 19 of BEFORE BABEL THE CRYSTAL TONGUE visits a little-known site nearby where monks, devotees of Saint Anthony of Egypt, until relatively recent times perpetuated an age-old tradition of cave-dwelling and where a trace of the Knights Templars’ passage is still apparent. Although neither the place nor the timeframe has any superficially evident links to the Sumerian language, my study of a large stone and the Sator square inscribed on it demonstrates that some undercurrent, some remnant of extremely ancient knowledge had been kept alive there. I hasten to add that my account is, to my knowledge, completely unrelated to any of the existing and somewhat threadbare theories about the existence of treasure or the tomb of Jesus in that region of France. It relies entirely on a decoding of that unique Sator square.

Along the way and again unexpectedly, the great wisdom teacher Hermes Trismegistus found me and took my hand. Hermes, revered by the Sabians of Harran (if the 1st millennium AD sources are to be accepted as true accounts) and assimilated to Egyptian Thoth in deepest antiquity, was the first alchemist, the Great Magician, Master of all boundaries. A study of the Sumerian symbols showed me the source of his name and its hermetic nature, a revelation that, as far as I know, has not been made public before now. The analysis of it is carried out as plainly as possible in chapter 18 titled “HERMES AND THE CRYSTAL HERESY” for reasons that should become obvious in the reading of it. I was led to a better understanding of the most noteworthy of the magic symbols and given a few unique glimpses into age-old knowledge which I share on his authority in this book. I don’t imagine that all has been revealed but I share what I have so far understood. It is harmless and of interest.

Over 150 of the earliest Sumerian symbols are mentioned and copied in BEFORE BABEL THE CRYSTAL TONGUE. Many are discussed in context. Some (but far from all) of their etymological descendants are also referenced, most through Greek and Latin words commonly attributed to a nebulous proto-Indo-European (PIE) source. That is one of the revelations first mentioned in the notes to THE STORY OF SUKURRU and confirmed here. We have the means to retrace many of our words to their origins, a point of immense importance. It signifies that knowledge of our deepest roots is not entirely lost. Words have been manipulated, blatantly so in recent times, insidiously turned against the common good for many millennia. Recovery of our languages’ source, even partial, must surely go some way to attenuating the dangers foreseen by George Orwell. We have the means to regain some balance, to look past the many layers of whitewash and lies.

BEFORE BABEL THE CRYSTAL TONGUE is a language book unlike any other, where ancient doors creak open on to unexplored avenues. In many of the words we still use unthinkingly today lies dormant the magic of what was once a worldwide common language, language of the Matriarch, the sacred ‘dialect’ to which the mysterious Fulcanelli referred, but much more than just a dialect, the language of the birds, the language of Hermes Trismegistus, the Crystal Tongue. I have done my best to bring it back to life. You might find there something I have missed. I hope so.

The full translation of THE STORY OF SUKURRU is given in the annexe.

¹ Fulcanelli, THE MYSTERY OF THE CATHEDRALS AND THE ESOTERIC INTERPRETATION OF THE HERMETIC SYMBOLS OF THE GRAND WORK,

² This tablet of the Sumerian King List (sourced from Wikipedia) is in the Ashmolean collection and dates to ca. 1827 BC, Old Babylonian period.

⁵ Discussed in the article ‘The Rustle of Stones’: https://grahamhancock.com/dainesm1

⁶ Line 102 where DA-DI translate to ‘arm’ and ‘equal’ or ‘divide’. The context indicated the use of one or more instruments allowing for a wide tonal range. There exists a Chinese flute called the ‘dadi’.

⁷ For the origin of Greek ‘meso’ (middle), part of the name Mesopotamia which is understood to mean ‘between the rivers’, see the Sumero-Hermetic proverb ME ZU NU MU ZU, shown with its source symbols and several possible translations, on my website: https://madeleinedaines.com/

The Story Of Sukurru Sumerian symbols and their true meaning

Before Babel The Crystal Tongue

6 thoughts on “Before Babel: The Crystal Tongue”