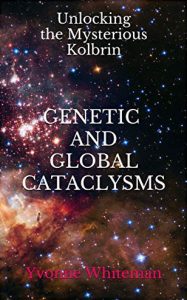 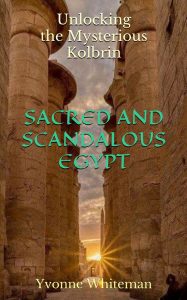 Is the Kolbrin – a collection of metaphysical Egyptian and Celtic books with no provenance published in 1994 – a forgery, or could it be one of the oldest written records of human life on this planet? Yvonne Whiteman is convinced it is genuine and for the past nine years, she has been investigating the Kolbrin’s historical content in the light of existing ancient writings, archaeological findings and DNA discoveries. Her Kolbrin articles have appeared regularly on grahamhancock.com. Now readers can explore her findings in the ebook series UNLOCKING THE MYSTERIOUS KOLBRIN and decide for themselves whether the Kolbrin is authentic.

Genetic and Global Cataclysms, published in 2020, contains a comprehensive Guide to the Kolbrin for those unfamiliar with this enigmatic book. It goes on to tell where we human beings come from, our turbulent beginnings and the unimaginable global cataclysms which have almost wiped out our species.

Sacred and Scandalous Egypt describes the lost lands whose survivors came to ancient Egypt as refugees, revealing who built the Great Sphinx and why. It chronicles the Exodus story from an Egyptian viewpoint, describes how great Egyptian ships once sailed around the world to Burma and the South China sea, and brings to light the dangerous ‘living resurrection’ ritual. It also contains a dark portrait of the Pharaoh Akhenaten and from this emerges the identity of Tutankhamun’s mother.

Both ebooks are fully illustrated with endnotes.

Excerpts from Sacred and Scandalous Egypt

Immortality: how Egypt regained the Secret of the Ages

A recent, well-publicised example of near-death experience (NDE) closely echoes parts of the Kolbrin description of the Hibsathy near-death experiencer. For over twenty-five years, Dr Eben Alexander worked as an academic neurosurgeon at Harvard Medical School in Boston, Massachusetts, USA, dealing with patients rendered comatose by trauma, brain tumours, ruptured aneurysms, infections or stroke. At that time he maintained that the brain generates consciousness, mind and spirit. In November 2008 he was driven into coma by a rare bacterial meningo-encephalitis. He spent a week on a ventilator, his prospects for survival diminishing rapidly. On the seventh day he woke up. Memories of his life had been completely deleted while in coma, yet he retained vivid memories of a fantastic journey into another realm. His son advised him to write down everything he could remember before reading any records of near-death experiences. Six weeks later, he completed his initial record. Then he started reading—and was astonished by the similarities between his own journey and those reported by other cultures and millennia. His subsequent bestseller, Proof of Heaven: A Neurosurgeon’s Journey into the Afterlife, maintains that human beings are conscious in spite of their brain and that consciousness survives bodily death.

Compare the following description in the Kolbrin with Alexander’s own memoir:

‘A hundred shining suns whirl above, a whisper rolls around like thunder, lights of manifold hues sway above, like the river reeds in the wind. All things appear to dance in a shimmering haze, then turn over and fold back into themselves, and such beauty is produced that the human tongue cannot describe it. All things take upon themselves shimmering forms through which other forms can be seen. Great melodic music throbs all around, while everything pulsates a soft rhythm. The air is filled with voices of unearthly sweetness, glory and splendour are everywhere.’ From The Kolbrin, Book of the Sons of Fire

‘Higher than the clouds—immeasurably higher—flocks of transparent orbs, shimmering beings arced across the sky, leaving long, streamer-like lines behind them… A sound, huge and booming like a glorious chant, came down from above… The sound was palpable… Seeing and hearing were not separate in this place where I now was. I could hear the visual beauty of the silvery bodies of those scintillating beings above, and I could see the surging, joyful perfection of what they sang… Everything was distinct, yet everything was also a part of everything else, like… a butterfly’s wing.’ From Proof of Heaven: a Neurosurgeon’s Journey into the Afterlife, Eben Alexander (Simon & Schuster, 2012)

The Pharaoh’s Folly at Amarna

‘Akhenaten/Nabihaton disgraced himself by bleeding his priests financially dry; by keeping a mistress at the Temple of Amun; by disclosing to wider circles the secret of ‘the ‘Hibsathy’ – how to penetrate the barrier between life and death; by weakening his perceived divinity by referring to himself in public as ‘mortally blind and frail’; by committing incest with his daughter Meritaten, making her queen in place of Nefertiti and fathering two sons with her; and by the pathological condition of Familial Temporal Epilepsy which dogged his judgement and behaviour throughout his reign.

This, says the Book of Manuscripts, is the secret locked into the North Palace site at Amarna. The residential temple was where, while Akhenaten/Nabitaton and Nefertiti were to all appearances a devoted couple, Akhenaten first cast lustful eyes on his daughter Meritaten at her consecration to the god Aten in the Sun Chapel. The encounter led to an overpowering incestuous relationship with his daughter which, after his queen Nefertiti left him in disgust and went off to live in Abydos, the king made no attempt to hide, and must have continued for some time since it resulted in the birth of two sons, Smenkhkare and Tutankhamun, who were so badly affected by hereditary medical conditions that they died young. Finally, tumultuous events led to Akhenaten’s own death, disgrace and the obliteration of his precious city.

What a story lies in those silent stones! And to think that the Kolbrin—a mysterious set of books with no provenance—provides the key to unlocking the Akhenaten story, stretching back over more than 3,300 years.’

The Three Lost Motherlands of Egypt

‘The Kolbrin’s Egyptian Books, the Edfu Building Texts, Plato, Proclus, James Churchward’s Naacal tablets, Edgar Cayce’s utterances and countless myths weave together an astonishing saga: of Kelathi in the Indian Ocean, ringed by mountains and ruled by a glittering Queen of Light whose priests served the lesser gods in great temples before the land vanished; of age-old Ramukui which shone out in the post-cataclysmic dusk of the Pacific, partially sank, was rebuilt, and disappeared into a fiery abyss; and of Poseida in the Aegean Sea, land of the wise men, obliterated by earthquakes, fire and flood. These, say the Kolbrin, were the lost Motherlands whose combined legacy was to transform the land of Egypt into one of the greatest civilisations of all time.’

8 thoughts on “Unlocking the Mysterious Kolbrin: Sacred and Scandalous Egypt”