Please join us in welcoming 2013 and our January 2013 Author of the Month Eckhart Schmitz.

Eckhart’s new book, THE GREAT PYRAMID OF GIZA: Decoding the Measure of a Monument sheds new light on an ancient and enduring mystery: The message of The Great Pyramid of Giza. Eckhart provides evidence, through his research, that many of the measurements and mathematical relationships related to the pyramids and their construction prove much important and advanced information is encoded in the structure. It’s extremely fascinating to contemplate the implications. Please join us in January for a discussion with Eckhart on the AoM Message Boards.

www.thegreatpyramidofgiza.ca The website features the entire book online and also allows a download of my book as well.

Mankind has been fascinated with the Great Pyramid of Giza for Millennia and has contemplated esoteric and metaphysical significance of its design, placement and structure to great end. Certainly, its awesome presence excites the imagination. To contemplate how the structure could have been erected in such scale and exactitude without machinery and advanced technology seems unthinkable and indeed impossible. No apparent "evidence" has been found to fully explain its construction and it is therefore controversial to advance ideas as to the level of knowledge possessed by its builders.

I propound that the Great Pyramid is a testament in stone written in the "Universal Language" of mathematics and it is in the use of elegantly simple equations that one finds information of advanced knowledge relating to the Earth, Astronomy and Astrophysics. It is substantiated that the Great Pyramid of Giza is a Monument of Science as it was known by our ancestors in the extreme distant past and was in this way a means of communication with humanity spanning countless lifetimes and will go on indefinitely well into the future. Evidently, there once existed a very well advanced civilization that predated that of the Ancient Egyptians and one might draw the conclusion that a catastrophe of global proportions must have set back the development of our species. It seems that we are evidently still suffering from a collective amnesia.

The Great Pyramid of Giza stands alone as the last monument of the Seven Wonders of the Ancient World. It is generally accepted that the Great Pyramid was built during the Reign of Pharaoh Khufu ( Cheops ) and was completed in 2560 BC. In view of Stellar Alignments with the “Star Shafts” which radiate from the King and Queen’s Chambers it has been suggested by Robert Bauval in his book “The Orion Mystery” that the date of construction might have been approximately 2450 BC.

Throughout history, the Great Pyramid has influenced the mind of Mankind and many theories have been promoted concerning the building and its purpose. Numerous conquests of Egypt were fueled in a great degree by the quest for Esoteric Knowledge. Alexander the Great and Napoleon were both influenced by Egyptian thought and their incursions into Egypt had a dramatic impact on the course of World events. Alexander the Great was offered the Double Crown of the Two Lands by the High Priests and anointed as Pharaoh in Memphis on Nov. 14, 332 BC and proclaimed as “Son of the Gods”.

Ancient Egyptian knowledge of Mathematics was studied by Greek Philosophers and their impact on the course of human thought was immeasurable. One can only imagine what the course of World History would have been had the Library at Alexandria not been burned. To this very day the Egyptian ideals of the Ancient World are still influencing the unfolding events of our time. A great many books have been written exploring the many facets of this influence. The Great Pyramid itself is said to be the most comprehensively studied building in the World as Scientists from across the Globe have studied its Geometry and its Symbolic Relevance in every conceivable detail.

For my part, I am not reviewing all of the theories of Past and Present but rather, I have concentrated on presenting new insights into its Design Geometry by analyzing the measurements as taken, for the most part, by Professor Flinders Petrie in 1883 since his measurements were highly precise and taken prior to any subsequent damages which would have been sustained in part from the onslaught of tourists. The shape of the overall design is well known and the dimensions of the internal structure has been meticulously tabulated. What remains to be explored is the relationship of numbers, in short, the equations that are encoded by dimensions using Pyramid Inches and the Royal Cubit.

I contend that The Great Pyramid of Giza is of a highly intelligent design that clearly demonstrates that the builders possessed highly advanced geodetic, astronomical and astrophysical knowledge well beyond what has been hitherto advanced including Newtonian Mechanics.

The following is a list of conclusions drawn from analysis of the relationship of dimensions found within and without the Great Pyramid :

To abbreviate one of the principal considerations explored in my book, we may look at the significance of the external measures of the Great Pyramid.

In 1925 Ludwig Borchardt, Director of the German Institute of Archeology in Cairo commissioned J. H. Cole to determine the exact dimensions of the Great Pyramid. His survey concluded the measurements of the base side lengths of the Pyramid given in meters as follows: (given on a drawing prepared for Ludwig Borchardt.)

Furthermore, in the late 1880’s Professor Petrie had measured the Great Pyramid’s perimeter and used the North Side of the Pyramid as the basis point from which to measure the other lengths therefore the error in measurement was least in regard to the North Side. On this basis one could say that the measurement of the North side most closely reflected the intended size. Therefore, the measure of 9069.4 B” or 23,036.256 cm may suggest the intended base length of each side. The base length multiplied by 4 would give a base perimeter of 921.45 meters.

Evidently, the square circuit of the Great Pyramid represented the Meridional Radius of Curvature of the Earth at the Equator to an extremely high degree of accuracy. It has been stated in various sources that the perimeter of this square circuit multiplied by 2 is equal to 1 Minute of Latitude at the Equator.

It is further to be given consideration that the hollowing in of the sides of the pyramid have a measure of 35.8 Pyramid Inches which would be equivalent to approx. 91.03 cm.

D. Davidson, a Civil Engineer by profession, suggested, in his book “Great Pyramid, Its Divine Message”, that the original casing stones (cladding) were originally as thick as the hollowing in of the sides and that this added to each of the corners would add a “Displacement Factor” to the overall Perimeter. His calculations indicated a perimeter with cladding of 36,524.2465 Pyramid Inches, however, he failed to take into account that his calculation of the length of a Royal Cubit was smaller than that determined by Professor Petrie. We will see that there is a co-relation here to be considered. Also, he assumed that a tropical year multiplied by 100 was taken as the basis point for the number of Pyramid Inches used for the length of the perimeter of the base.

I believe, that the builders would have used a "Winter Solstice Year" as apposed to a Tropical Year as it was in 2560 BC and would have used the Karnak Solar Temple as a means to have calculated its duration. It should be considered that Re was "The Solar God" and his Birthday was celebrated on the Winter Solstice.

In essence, the original Exterior Measure of the Pyramid would have been 36,524.3 Pyramid Inches (Winter Solstice Year in 2560 BC multiplied by 100) and thereby would have been 928.737 metres.

The measurement of 40,121.434 km, the proposed External Base Perimeter with cladding of the Great Pyramid multiplied by 43,200, is of particular interest as it relates to the shape of the Earth.

The following diagram illustrates an example of a Transverse Osculating Circle: 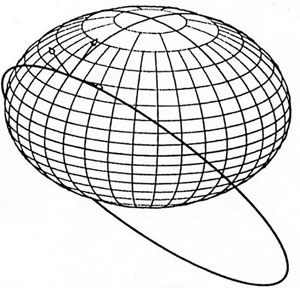 The Geodetic Latitude at which the Earth has an Osculating Circle of 40,121.434 km (the Great Pyramid’s perimeter measure multiplied by 43,200) which yields a Transverse Radius of Curvature of 6385.5245 km occurs at 35.9955 degrees Geodetic Latitude.

It is quite clearly evident that the builders of the Great Pyramid intentionally chose a perimeter measurement that would relate to 36 degrees Geodetic Latitude and in so doing expressed, not only a highly precise knowledge of the Earth’s size and shape, but also demonstrated a precise knowledge of the value of the Golden Ratio or Phi () the value of Pi () and their relationship to a spherical body.

At this point we may look at the Measure of the Royal Cubit and whereby we find:

As it can be appreciated, this measure accords well with the accepted measure of 52.4 cm for the Royal Cubit and supports the proposed Perimeter measure of the Great Pyramid with cladding.

This is only one example of the "scientific" nature of the Great Pyramid that is substantiated in my book. In all, my book examines each and every principal measure of the Exterior and the Interior Passages and Chambers to glean scientific knowledge that is encoded.

Furthermore, I have found a "Code Number" within the measure of the Queen’s Chamber, and, with this number in hand, all of the principal measures of passages within the Great pyramid become unlocked. The Grand Gallery comes alive with highly relevant Geodetic measures of the Earth at distinct points of Latitude. Also, the lengths of the Entrance and Ascending Passages are found to have relevance in Astronomy.

The Elevation of the Entrance Passage is found to indicate the number of days in the Metonic Cycle of the Moon. Also, the distance to the Sun is encoded by the measure of the elevation of the King’s Chamber and the Earth’s Orbital Velocity is given by the Bridging Slab in the Passage to the Queen’s Chamber.

Overall, it is concluded that the Great Pyramid of Giza is of a highly intelligent design. Its construction detail demonstrates extraordinary precision in relaying highly accurate geodetic knowledge of the Earth, astronomy, astrophysics, advanced mathematics and Newtonian mechanics. Since there exist numerous examples of complimentary and corroborating values, which may be interpreted as encoded within the measurements of the Great Pyramid’s geometry, it is evident, with a very highest degree of probability, that the design parameters were expressly intent on conveying this advanced knowledge.

For a complete review of my study of the Great Pyramid, you are welcome to visit my website www.thegreatpyramidofgiza.ca
The website features the entire book online and also allows a download of my book as well.

Eckhart R. Schmitz was born September 13, 1962 in Ottawa, Canada. His parents Hans J. Schmitz and Edeltraut Schmitz immigrated to Canada from Germany in 1952 and 1954 respectively.

His father was a Landscape Architect by profession and founded a Landscape Design and Construction firm in 1955. Both his uncles on his father’s side are professional architects as well. Eckhart was engaged in draftsmanship at a very early age and had a very keen interest in architecture of ancient buildings already in his adolescence. One of his earliest pencil sketches in perspective drawing, at the age of 12, was of the Karnak Temple at Luxur.

At school, Eckhart excelled at mathematics and sciences and was an honour student in all disciplines. At the University of Ottawa, he studied Philosophy and Political Science, augmenting his studies in Business Administration and Economics. In his father’s firm, he was trained in all aspects of design and construction with particular emphasis in Natural Stone Masonry.

Following his schooling, Eckhart managed a concrete manufacturing plant specializing in the fabrication of architectural components and at 30 assumed management of his present firm, founded by his father, which specializes in Masonry Construction and which now employs upwards of 78 people.

In his spare time, his personal interests include the study of ancient architecture for its aesthetic as well as its philosophical underpinnings as well as history and theology.