This piece is written by William Glyn-Jones, and is based on a chapter from his as yet unpublished book Amazement Arcadia.

It is a summarized version of a longer piece that, for those who find the summary intriguing, can be found at
http://cuppalot.blogspot.com/2007/05/lascaux-twin.html

or by following this link: THE LASCAUX TWIN

The possibility that constellations, specifically Taurus and the Pleiades, were represented in the artwork of the Lascaux caves has been suggested before. Luz Antequera Congregado first suggested in her doctoral thesis in 1992 that the dots above the shoulder of this bull depict the Pleiades (and that the dots on the bull's face are the neighbouring Hyades). 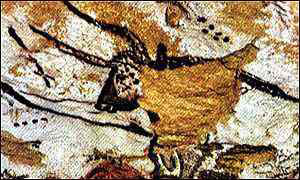 Keeping this in mind we may then go to another theory about Lascaux art, and the leaning bird-man image to be specific, which suggests that he and his bull represent the old myth of Yima and the Primordial Bull. Mary Settegast in Plato Prehistorian makes this brilliant suggestion. This Yima figure is found in Hindu India as Yama, Persia as Yima, Norse lands as Ymir, and always there are the associations of the primordial bovine, the identity of Yima as a first ancestor, and as the lord of the dead, and usually there is the creation of the world from his body. The Indo-European root of this name means "Twin", and Gemini ("twins") is from this same root. This is where I fuse the two aforementioned theories into one, and an increasingly solid hypothesis begins to reveal itself.

The Twins constellation, Gemini, is located next to Taurus, the Bull. Gemini consists of two long straight lines leaning at a 45-degree angle with respect to the ecliptic, while the majority of Zodiac figures stand upright at culmination. The Bird Man also leans at this angle, and is drawn from two long straight lines. He is certainly in the right position relative to the Bull. 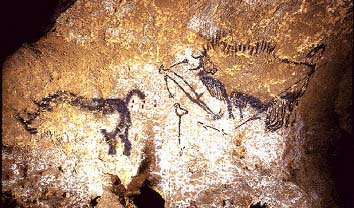 The Rhino in the painting (believed my Mary Settegast to represent the Death Principle in the myth) is in the location of Leo, and with some delight we observe that the back parts of the Rhino map perfectly onto the formation of this constellation.

We may then look at the bird-on-pole located under the Bird-Man, and note that, surprising as it indeed is, there is a bird on a pole (Horus on Pillar) in the same position below the Twins in the Denderah Zodiac! This is the standard known as the “Followers of Horus”, and an inscription at Denderah says that it was according to plans inscribed upon a goatskin dating from the time of these Followers of Horus that the plan of the Denderah Temple was rebuilt. According to the Egyptians the Followers of Horus were those people who came to Egypt from another land long before dynastic times, and here is their standard, their totem, in this same place in the Zodiac of this same Denderah temple supposed to recall their design! So…were the Followers of Horus the painters of this Lascaux scene, a bird-and-bull totem Magdalenian tribe who migrated to the Nile valley? 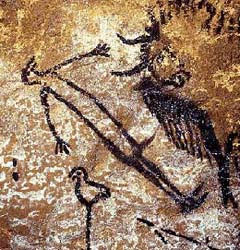 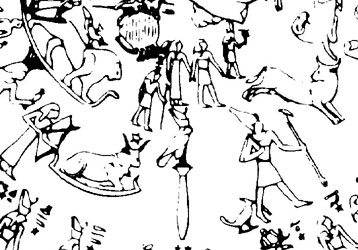 Bird-on-Pole beneath Gemini in, left, Lascaux, and right, the Denderah Zodiac

A bird on a pole is present in early Egyptian rock art and 2004 research by Dirk Huyge has revealed very early Egyptian rock art showing bulls in what he describes as the Franco-Cantabrian style. This rock art is scientifically dated to between 8,000 and 10,000 B.C., very, very strongly supportive of the theory that a Magdalenian tribe had started settling in the Nile valley at that time.

The feet of Yima in the Lascaux image map onto Orion when it is taken as a star-map, and this fits with the fact that the Egyptian name for Orion actually means “Toes Star”.

There is more confirmation of a connection, for, astoundingly, it is said of the deceased pharaoh in the Pyramid Texts: “You ascend with the head of a hawk and all your members are those of the Twins of Atum.” In the later Hermetica Atum is credited with the creation of the Zodiac, in which context there would be no doubt about whom the Twins of Atum are – they are Gemini! Yima in the various stories goes first into the Otherworld to become Lord of the Dead. Here we have him, in the Pyramid Texts, ascending to that place with the same bird-headed form ‘the head of a hawk’ that we see at Lascaux.

In fact in the Rig Veda of early Hindu India there are similar texts that concern the passage of the dead into the Otherworld, the land of Yama. 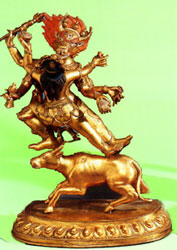 Left: Egyptian pre-dynastic “makeup palette” depiction of the bird-on-pole standard, and right, Hindu Yama and Yami, the Twins, in leaning posture on the Black Buffalo

“Yama was the first to find the way for us, this pasture that shall not be taken away. Where our ancient fathers passed beyond, there everyone who is born follows, each on his own path.

[To the dead man:] Go forth, go forth upon those ancient paths on which our ancient fathers passed beyond, rejoicing in the sacrificial drink.

Unite with the fathers, with Yama, with the rewards of your sacrifices and good deeds, in the highest heaven. Leaving behind all imperfections, go back home again; merge with a glorious body.

The fathers have prepared a place for him. Yama gives him a resting place adorned by days, and waters, and nights.”

I suggest that we consider very seriously that these Hindu texts and the words quoted from the Pyramid Texts go back to the same Upper Palaeolithic origins! I never would have believed such an idea if I hadn’t traced through these most unexpected connections.

Mesolithic rock art of the Sahara is like Magdalenian art – some of them seem to have crossed over in a colder period to the Sahara which was then lush and then settled along the Nile valley when the Sahara dried up.

Another name for the Followers of Horus was “The Founders of Heliopolis”. The totem of Heliopolis was, again, a bird on a pole, namely the Benu Bird, the Phoenix who stood on the perch in the primordial ocean. The Egyptian myth of the Phoenix reborn after long periods of time is thought by Egyptologists to refer to the Sothic Cycle. The Egyptian year started with the first rise of Sirius just before the Sun, but with precession this date gradually shifted with respect to the solar year. The Sothic cycle relates to this shifting – the finer details need not concern us here, but the point is that the Phoenix, the Bird on the Perch, was identified with Sirius. And amazingly, this too fits with the location of the bird on the pole in the Lascaux star-map. This further seems to confirm that Heliopolis with its cult totem was indeed founded by those Followers of Horus who hailed from the Magdalenian culture. 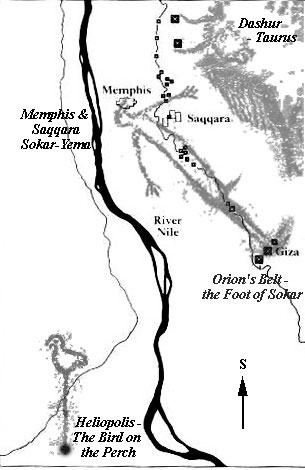 It must be noted, however, that at the Lascaux latitude 17,000 years ago Sirius never rose above the horizon, while in truth the position of the bird-on-pole in the Lascaux painting relative to Gemini, Orion and Taurus is more like that of the reasonably bright Procyon, in Canis Minor, which was visible in the Lascaux sky at that time. It could well be that the associations were transfered to Sirius once the much brighter star appeared in the sky nearby. The bird-on-pole figure in the map here is pasted individually, not in exactly the same position as in the cave painting.

I find this deeply fascinating. Because Heliopolis is also Sirius in the Orion-correlation scheme, I find myself, though I never really believed it before, much more open to the possibility that the Orion-Giza correlation results from a plan first conceived thousands of years earlier than the materially productive Egyptian culture whose artefacts fill the museums, rather as Robert Bauval originally suggested in The Orion Mystery. Mapping the Lascaux version of the star-map onto this scheme puts the bird-head of Yima (i.e. the twin stars Castor and Pollux) at the location of Memphis and its land-of-the-dead equivalent, the Saqqara complex. Sokar was an ancient deity associated with Saqqara, and he was shown as a hawk-headed figure.