Deep History and the Ages of Man

It is our pleasure to welcome Mark Gaffney, author of Deep History and the Ages of Man, as our featured author for December. In his article, Mark shares some insights into his research that presents new evidence in support of Charles Hapgood’s theory of crustal displacement. In his book, Mark introduces a new earth climate model that calls into question preconceived notions about ancient history and challenges what he believes are false assumptions about the nature of the planet we inhabit.

Interact with Mark Gaffney on our forum here.

Surely you can’t be serious! Some will respond. Admittedly, it is a radical idea. Yet, it also happens to be true, as I will now show.

I am specifically referring to the bone caves of Britain. There are at least twenty of these caves and taken together they hold an invaluable fossil record of the last 120,000+ years. This includes precise information about regional climatic shifts and cataclysmic changes that were planetary in scale.

Kirkdale, a natural cavern in Yorkshire, was the first cave to gain notoriety. In 1821, road workers stumbled into it by chance. The cave was pristine, and it soon drew the attention of scientists. They found it loaded with fossils of many species, including stag, bison, horse, hippopotamus, woolly rhino, woolly mammoth, spotted hyena, and many others.

Later that year, a well-known Oxford geologist, William Buckland, was called in. Professor Buckland had just completed two tours of the continent during which he explored a number of similar sites. Buckland had conferred with Europe’s leading naturalists, and on occasion, he had also been privileged to inspect private collections, including one owned by Goethe. These experiences well prepared him to investigate Kirkdale cave.

Although Buckland was a catastrophist and agreed with George Cuvier that a major deluge had brought about a geologically recent earth-wide extinction of large mammals like the woolly mammoth, he found no hint of a deluge at Kirkdale cave. There was no evidence that the animals had been swept into the cavern by a flood or tsunami. The sediments convinced Buckland they had died at or near where they had lived. Although the cave contained the bones of many species, the greatest number belonged to the spotted hyena. Also, many of the large bones had been visibly chewed and/or disarticulated. Buckland concluded the cave had once served as a hyena den.

In 1822, the professor presented his findings to the Royal Society. His presentation was so detailed it occupied three successive weekly meetings. Buckland’s report stirred great interest in England and Europe and was widely regarded as a gold standard on how to conduct a scientific investigation.

In subsequent years, many other bone graveyards came to light in the British Isles and were independently investigated. I won’t run through them here. I refer the reader to a helpful table from geologist William Boyd Dawkins’ 1874 book, Cave Hunting. Someone thankfully posted the book on the Internet in its entirety. 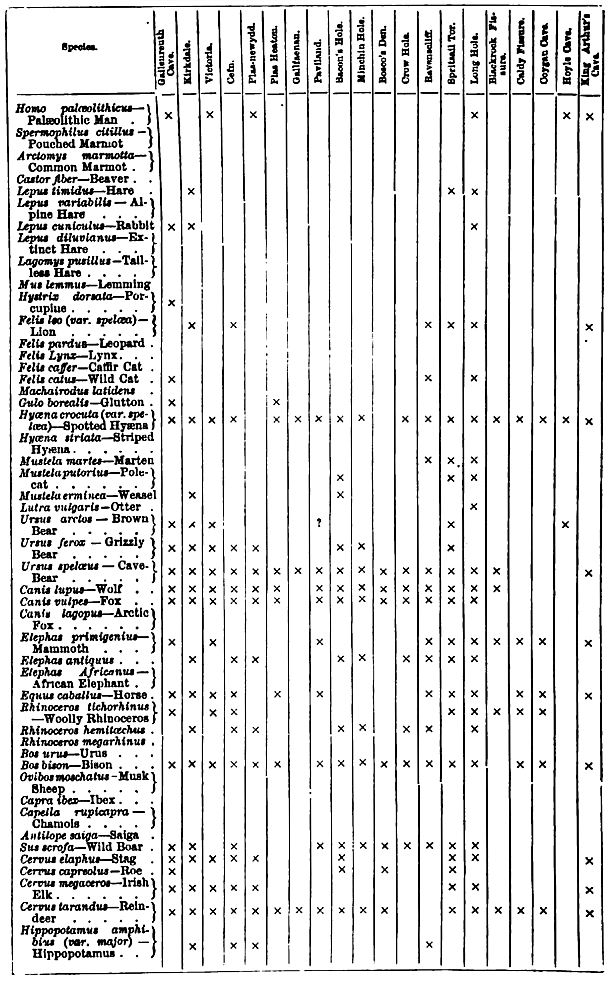 By the 1850s, earth scientists were in a quandary because the Pleistocene bestiary included northern species such as the musk ox, Arctic fox, lemming, wolverine and grizzly bear, but it also included southern species like the spotted hyena, straight-tusked elephant and hippopotamus. The bones of these very different faunal groups had come out of the same bed and, at least initially, it appeared that both had existed simultaneously. To be sure, excavation methods were less meticulous in those days. The stratigraphic layers were not always properly identified.

Early attempts to explain the paradox were less than satisfactory. Some scientists, including Dawkins and Charles Lyell, argued that seasonal migrations explained the puzzling association of northern and southern species. Dawkins, for example, cited the well-known long-distance migrations of reindeer, elk and moose.

The hippo fossils presented a major problem, however, because hippos are not migratory. No one could say how the lumbering water-browsers had relocated from Africa where they presently live to Britain and Europe. Did the animals navigate down the Nile River, swim the length of the Mediterranean to Gibraltar, then paddle north to Britain? The idea seemed preposterous. None of it made any sense.

Perhaps not surprisingly, a number of prominent scientists rejected the seasonal migration theory. Louis Agassiz was one of these. In 1839, he had proposed a new theory of the Ice Ages, and true to his theory, he argued that rapid climate change explained the replacement of southern forms by cold-adapted northern ones.

A well-known geologist from Edinburgh, James Geikie, agreed with Agassiz. The Pleistocene, Geikie noted, was characterized by alternating periods of glacial advance and retreat, and during the latter interglacial phase, as it had come to be known, the climate of Europe and Britain had been much warmer. Surely the fossils of ancient hippos, elephants and rhinos dated to one of these warm periods which apparently had lasted for thousands of years. With the return of the next cold epoch, the southern fauna retreated and were replaced by the cold-adapted northern forms. Agassiz and Geikie took it as self-evident that the southern and northern species never co-inhabited Europe at the same time. Their ideas foreshadowed the evolution of scientific thinking down to the present day.

But the current science model did not really take shape until the advent of isotopic dating in the late 1940s and 1950s. The promising new methodology made it possible, for the first time, to determine the age of organic material, including fossils, within a reasonable margin of error. Fossils from the bone caves have been isotopically dated and confirm that Agassiz and Geikie were correct. The northern and southern adapted species never shared the land in the same epoch, nor did they migrate seasonally. They lived at different times.

This is not the end of the story, of course. The case illustrates how science advances. Even as one question is resolved, many new issues arise. For example, why was England subtropical in the first place? And why did the climate later deteriorate and turn cold?

Today, nearly all earth scientists take it for granted that England and Europe were subtropical during the Eemian due to a general warming of the planet. And they likewise assume that a general planetary cooling explains the presence of a two-mile deep ice sheet over North America during the Last Glacial Maximum (LGM) between 25,000 – 18,000 years BP. This supposedly explains the weird orientation of the Laurentide ice sheet, the greater part of which was well south of the Arctic Circle. Judging by the map, the ice sheet reached the latitude of present-day Indianapolis, Indiana and Des Moines, Iowa (40° and 41° N, respectively) both of which are in the temperate zone, very far from the Arctic.

But I believe scientists have been misled. One would reasonably expect that the same general cooling that produced an enormous ice sheet over North America would simultaneously have produced an ice cap of roughly the same mass and at similar latitudes on the other side of the planet, i.e., in Tibet, especially considering Asia’s extraordinary terrain. It is for good reason that Central Asia is called the “roof of the world.” The average elevation in Tibet is 14,700 feet, which is 200 feet higher than Mount Whitney, California, the highest point in the lower 48 states. However, analyses of ice cores recently recovered from high elevation ice fields in Asia indicate otherwise. The data shows that glaciers in Tibet and in the Altai Range were actually receding during the LGM, at the very time they were expanding in North America!i How do we account for this?

The bone caves as a holographic record

The bone caves of Britain are one of the keys to the answer. During the twentieth century, research continued in the caves. And in 2001, two paleontologists, Andrew Currant and Roger Jacobi published a paper summarizing 180 years of research.ii Unfortunately, these two outstanding scientists, both of whom are deceased, never received in life the credit they richly deserved. Their 2001 summary paper is so important that I obtained permission to reprint it in full as an appendix to my book.

Over the years, improved methodologies enabled scientists to take stratigraphic analysis to the next level. The fossil record turned out to be more complex than was originally believed. The initial resolution of faunal assemblages into southern and northern species was further differentiated. As of today, scientists have identified five separate and distinct faunal groupings, the so-called mammalian assemblages, each one representative of a uniquely different stratigraphic layer with its associated climate. Scientists named the assemblages after the cave or site that is most representative of each.

The stratigraphy determines the climatic sequence and chronology.

The oldest bed dates to the Eemian and contains the southern species found at Kirkdale cave, including the hippopotamus. The next layer holds a different assemblage of mammals indicating that Britain enjoyed a temperate climate during this period. The presence of the woolly mammoth at this time means that a land bridge also linked Britain and Europe. The third layer holds a very different assemblage indicative of a cold climate and corresponds with the European Ice Age. The assemblage from the fourth layer is indicative of another temperate period (and another land bridge) which persisted until the end of the Pleistocene. The last stratigraphic layer corresponds to the Holocene. But here is the crucial question that scientists, thus far, have failed to answer: why did the climate of Britain change from subtropical to temperate, then to an ice age and back again to temperate, all over a period of 120,000+ years?

My just-released book Deep History and the Ages of Man offers an explanation. The book introduces a revelatory idea: that each of the mammalian assemblages and its associated climate correlates with a different north pole position. I am saying, in other words, that the crust of the earth moved four times during the last 120,000+ years. And each time it moved the location of Britain changed in relation to the pole. There was neither a general planetary warming nor a general cooling. The climatic sequence recorded in the bone caves precisely mirrors the successive changes in north (and south) pole positions.

The changes in pole position also correlate with changes in sea level. It is well known, for example, that the highest sea level during the entire Pleistocene occurred during the Eemian interglacial. At that time the world sea stand was about twenty-six feet higher than at present. Scientists have never explained why. But the explanation is straightforward. To assist the reader, I have included a map of Antarctica showing the locations of the present and last four south pole positions. The map shows that a picture is indeed worth a thousand words. 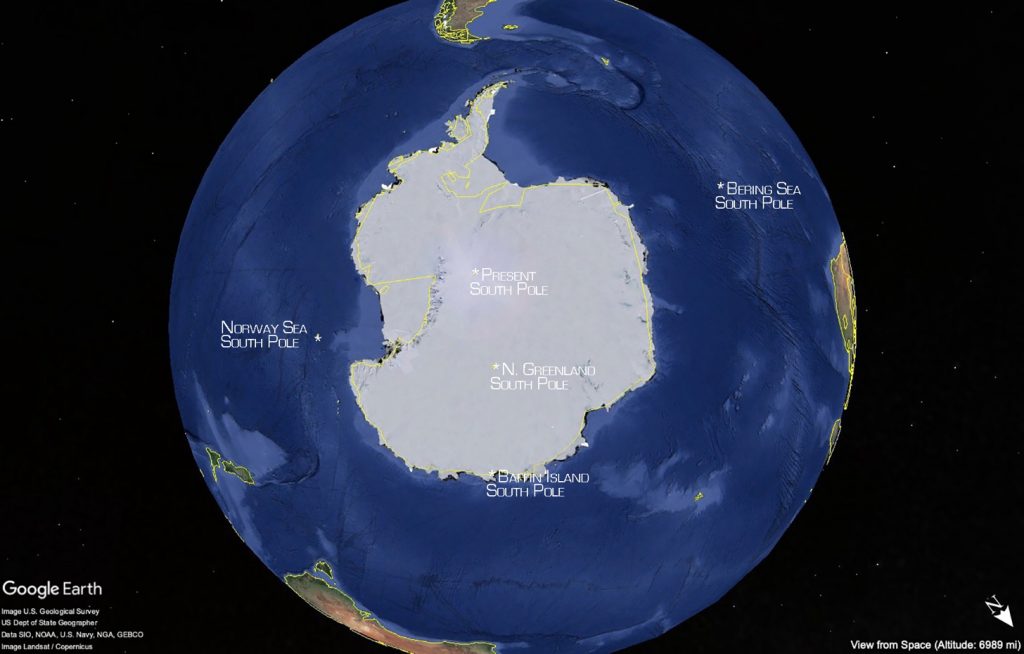 Changes in pole position also explain the emergence of land bridges between Britain and Europe and also between Alaska and Siberia during the periods when Britain enjoyed a temperate climatic, and an ice sheet simultaneously covered North America. As the ice caps developed, sea levels dropped accordingly.

If the answers are so straightforward, why have earth scientists failed to put all of this together? The reason is that they simply cannot get their heads around it. Like most people, scientists are prisoners of their own limiting beliefs and assumptions, especially the unexamined false assumption that the crust of the earth and the pole positions are immutable. Not so. There is no law of physics or Nature which requires that the crust of the earth be fixed in perpetuity. The only unchanging natural law is that change is the order of the universe.

i See Chapter Seven of my book.