“To cheapen the lives of any group of men, cheapens the lives of all men, even our own. This is a law of human psychology, or human nature. And it will not be repealed by our wishes, nor will it be merciful to our blindness.” –William Pickens 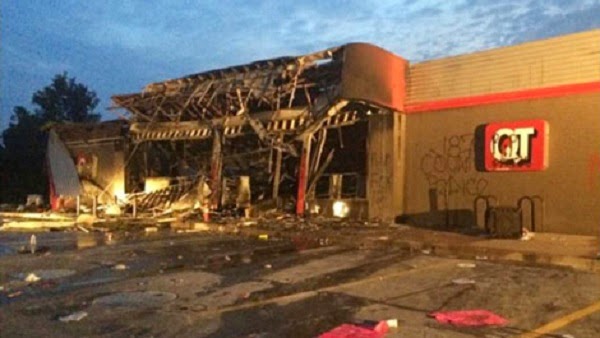 A city in shock? Depends on where you live, and what your life perspective was. The average conversations that were being held by people all over St. Louis, were with a tone of shock, but not total disbelief. Those actions of a wild mob seemed to validate many’s beliefs about many peoples. I wanted to conversate with coworkers about the philosophical sons of Nixon, stuck with their sixty’s blueprint of dealing with peaceful protests; who seemingly pushed a blob of angry protestors, into several separate mobs, hellbent on misguided revenge. The footage of the looting was just too damn jarring for the average Joe to look past. Reality T.V. with bite. The scenes were so surreal, you were sure this was some horrible episode of “Cops, St. Louis” gone wrong. Chock full of images too intense, to be scripted. Yet it was really happening. I could have gotten into my minivan, and taken a ten minute ride on Highway 70 to insert myself into something humans in this Western Civilization will rarely ever know. A tiny moment in time, where the mob mentality of millenniums long gone, suddenly erupted like a volcano from a rumbling mountain top, and ripped off the civilized calm, of culture’s cruel construct. Many people watching the same local news broadcast I was, indeed, gave way to those denied parts of our shared human essence, which allow us to act as an animal, capable of playing follow the leader right over the edge of oblivion. These savages from surrounding areas, arrived in waves overwhelming, and apparently accounted for most of the night’s monetary loss. 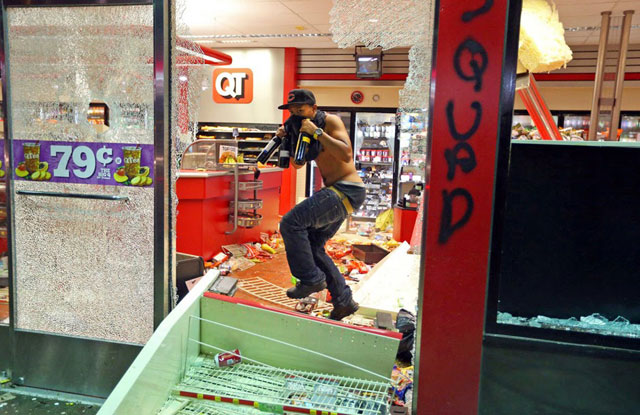 The people I knew and ran into that Monday morning, who lived close enough to ground zero that they’ve patronized the QT on West Florissant Ave., those living in the counties boarding St. Louis city’s north and northwest borders, were the ones I wanted to hear from, anyway. Surely they’d be outraged, over the insanity being perpetrated against the citizens of their community. Alas, quips about rims and weaves being stolen, jam-packed with racial overtones, dominated every conversation. Mike Brown seemed to be less relevant, too. The allegedly unarmed 18 year old, who was undeniably shot and killed by a Ferguson cop in broad daylight, was now secondary to the thievery and thoughtless havoc, that ruled the night previous. His mother could not be forgotten, saying as much. She thundered thoughtful instructions for all the individuals who took part in the besmirching of her son’s tragic death, by taking the bait, and reciprocating unlawful behavior. She plead with the public, through a news reporter’s microphone, sobbing and weeping uncontrollably; but her words were clear. “Stop the violence. Justice for Mike’s death, will not come by stooping to this level. Their level.” Held in another’s arms the whole time, her sobbing body eventually went limp, and she has only spoken through her attorney, and family members, since. Their message ever-present: stop the violence. We want justice, not looting… 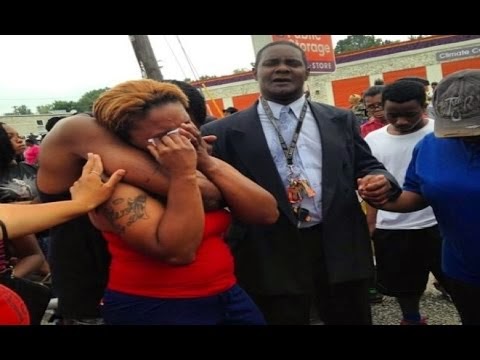 The incident of Mike Brown’s death, whatever the circumstances pan out to be, at the hands of a white police officer, was more than just another unfortunate death of another youth in a community deprived of almost all hope. The eternal human hope, of yearning for a better life for their youth, is the last straw clung to, by many of the people living in this decidedly urban area; left in the economic dust of “the white flight” from the community decades ago. Mike Brown’s death represented to these people, and millions of people in similar neighborhoods and situations across the globe, an inherent and systematic problem they’ve dealt with their whole lives. 76% of Ferguson’s population are black, yet only 5% of the police force represent them. How is this an issue? The dirty little secret, throughout time, is that the human beings in control, will always aim to keep themselves in control. From the local politicians who seem to stay entrenched for lifetimes, to just as importantly, what is and what is not “tolerated” by it’s police force. Equally, those subjugated by a differing socio-economic class, will rumble and grumble about being under that different colored thumb, disguised as a helping hand. Unless you’ve been subject to unnecessary harassing and menacing behavior, at the hands of those sworn to uphold the law and who see you as less human or less important then they are; this is a situation maybe too askew for you to truly understand. 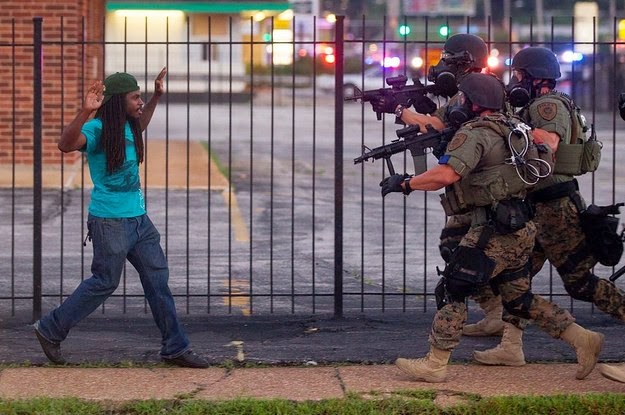 When you live in a community so downtrodden, that you sometimes fear for your life while walking down the street at night, one can understand the people policing it, might feel equally on edge. However, if this particular police force escalated their usual system of suspicion and harassment based on age, race and class, into public executions of public nuisances in broad daylight; then their true colors would finally be shining through the thin layer of denial, with the bright lights of public outrage and worldwide t.v. cameras, focused acutely. So, on the second night, a paranoia over the “mob” and where the looting could spread seemed to be palpable. Like a city under siege, we looked to the forthcoming night as a guarantee for more citywide fright. Some, like me, wondered of the knee shaking realities of what might happen when these unarmed civilians provoked to the point of insanity, finally bring guns to the gun fight. What would happen when one of the crowd of protestors, or one of the separate and late coming looters, opens fire on the police? Or just points a gun in the air? Or just has his gun? Or just looks like a guy who had a gun a few minutes ago? Or pulls out a candy bar.

The Eye Of A Storm

We had a relatively quiet second night of looting, with a single shoe store broken into by thirty – forty people in fifteen vehicles in a neighborhood in south St. Louis city, some thirty minutes away from “ground zero”, as the scene of Mike Brown’s death has come to be called. No arrests were made, as they were scared off by one unarmed security officer, after they attempted to hit the neighboring Radio Shack. In Ferguson, police disperse what wanted to be a peaceful protest, but looked like a riot waiting to happen to everyone with a badge, or a family laying in bed watching the news; with rubber bullets, riot gear, and threats of arrest and tear gas. There was some hope for a more peaceful Tuesday night, though. Then we saw spotty early afternoon reports of what seemed to be, a staged fist fight between two teenage girls in the middle of a mall some twenty minutes from Ferguson, as a ruse to allow a bum-rush into a few stores. A mall extremely close to some extremely wealthy counties of St. Louis. When media helicopters were not allowed within a twenty mile radius of Ferguson, in general live feeds seemed a bit fewer in number and less in value. Nobody seemed to question the reasons for the beginning of this restriction of press coverage, but they soon realized the obvious.

>On Tuesday night, after reports of a bullet finding a random woman’s head through her car window, her skull bone deflecting the .22 bullet effectively enough for her to post a selfie on FB promptly thereafter; there was a shooting by the police. A highly armed, extremely tense man who was a police officer yesterday but now found himself dressed in, but not trained for the para-military activities he was now involved in, would actually shoot someone out there. This time, the report on the story was clear, 4 men with ski masks and shotguns moved amongst a larger crowd of over a dozen. This was reported to police, a confrontation ensued, and one of the four suspects pulled a handgun on the officer. The suspect was shot and critically wounded. The details of this action were indeed, more quickly reported by Ferguson police, than the facts surrounding Mike Brown’s death. The amounts of tear gas deployed late Tuesday night, to disperse protests around "ground zero", was merely a precarious prelude, for the nights to come. 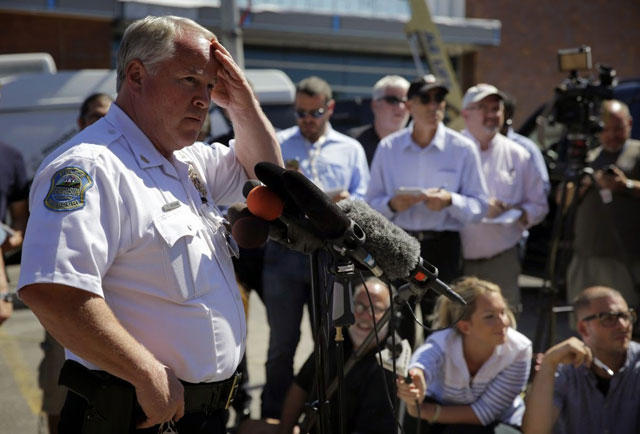 I call this day or so, the eye of the storm, as it almost seemed there was a level water mark. Some sort of ominous quiet for wishful thinking, found by the people living in this metropolitan area, between the Sunday that saw a group of civilians seek solace in producing a spontaneous funeral parade of grief and outrage, that escalated into a solidified force of civil unrest before being exploded into roving groups of wolves, and exploited thereafter, by parasites in ravaging their business institutions. And then the Wednesday night which saw a somewhat unexpected yet extremely videotaped hammer of the new law and order, brought down on protestors and passer-byes alike. Was this hammer just a reasonable response to complete anarchy? Was it an excessive use of force on citizens? Were the facts behind the Mike Brown death really so compelling, to see both diametrically opposed sides of that event, actually push life in one community beyond every breaking point? Would anybody else even care? 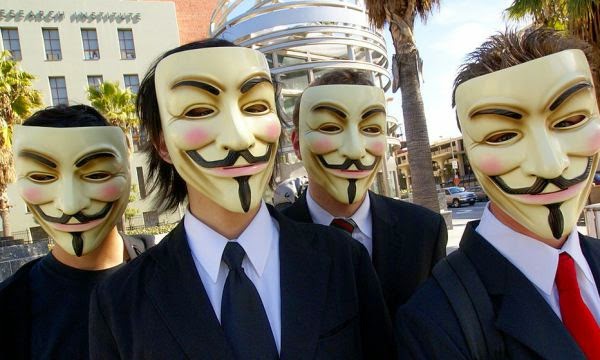