The Pedestrian Path To War

Last night, I watched on the evening news (and all the way into the wee morning hours), via the wonders of 21st century technology, an archaic state of affairs unfolding in real time, for everyone in our city, and the world, to see. With the unflinching boldness of eager journalists, people used to covering local traffic were now following chaotic cars and plundering pedestrians, criss-crossing the confines of a neighborhood on fire. A fire, raging full of the flames of families forgotten, of neighborhoods neglected, and of tragic injustices done.

I then watched on YouTube, the embers embedded in the engulfing inferno of earthborn fury, filming for all the world to see, what began as a nonviolent (maybe not peaceful, though) vigil, turned protest. I watched from another man’s point of view, as he walked amongst an army of unarmed civilians. Women and children alike, joined in chanting their poignant cries of solidarity, in the face of their perceived aggressors; "no justice, no peace", and “hands up, don’t shoot”! The unmistakable thumping beat, of their hip-hop war-drum, accompanied his first person narrative along the paved path to inevitable confrontation. As he was in the middle of describing the human barrier now in his view, a firearm pierced through the commotion, with an unmistakable discharge, of which, this community is all too familiar. As women immediately about faced and rolled their strollers, full of precious infant human cargo, away from the now determined, line of no turning back; they shrieked admonishments at the insufferably infuriated future of their culture and bloodlines, for occasionally catapulting antagonistic water bottle bombs, and trash and rock shrapnel picked from the city streets they lived on. Complete panic should have took hold with their opponent’s opening volley, but on these streets, the inexplicable will become the norm…

A Regrettable Line In The Asphalt 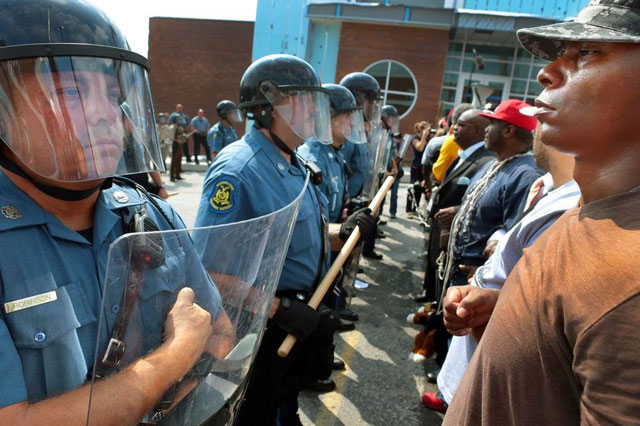 The shot was immediately identified, by this seasoned street soldier (while keeping a steady hand for my portal into his reality), as just a warning shot. A shot that was fired from that line of men, dressed and prepped for violence from the onset, in response to this impromptu, peaceful citizen protest. Men who had apparently waited for nightfall, to proceed out like a Greek phalanx, from their preconceived and well established line in the asphalt. This force, whose charge it is to serve and protect the population of which they are a part, rose their shields, loosed the leashes on their German Shepherds, and began a methodical push into this mass of unarmed humans of all ages (but decidedly one shade of skin), who had spent hours ignoring countless pleas from preachers and politicians to “just go home”.

Why would they listen? Why should they just go home? They’d had enough. They represented a whole people, who have suffered proven and perceived injustices uncountable, at the very hands of the armed force, now blocking the next intersection. They were a deluge of despair, roaring through the corridors of a volatile and toxic zone of distrust. They had no delusions of grandeur. They had no plan to use this tidal wave of visceral emotion for good, or for foul. They yearned to wash away the pain and betrayal they’ve felt in each of their days there, in their neighborhood, but they knew better. They were a community in mourning, a group who felt assured of two things. They knew, that there was nothing that they have ever been able to do, to find justice for the daily wrongs they’ve suffered in the past. They also knew, that this time, they were not going to take it lying down.

So, when faced with the devastation of quietly going to another funeral, for another young man, who met his maker all too young. One whose life was ended, by one of those special few citizens trustworthy enough to be sworn to protect his life. They could not. They would not. They succumbed to the tsunami of pain and anger that has been bred and bruised into their souls, from the earliest of ages. They gathered by the hundreds for a long prayer vigil, after which, a large group of these individuals let their pain and confusion melt together, in the form of a march through their neighborhood. This was not an orchestrated protest, with a conceivable endgame and means to accomplish it, planned with meticulous precision. It was a spontaneously combusted flame of fury, with nowhere to go. So, after hours of antagonizing a peaceful protest into a manic frenzy, unnecessary and unlawful force was used in the dispersing of a nonviolent protest. Using tactics reminiscent of all those "oppressive regimes" our government is so fond of overthrowing, the fire was doused in gasoline; and it quickly spread.

Hundreds of people, brought their mothers, brothers, children and friends to load their vehicles like it was April 26, 1992. Jackals and leeches, from as far as the neighboring state across the river, abused the same 21st century privileges I was being afforded. They took action, like sharks, knowing the blood was coming even before their heightened sense for it, compelled them to kill. These savages used this fire, fueled by police finally breaking their ambiguity about how they treat these citizens, to flock to the area. They broke into over a dozen shops and local businesses. Only further damaging the pride and livelihood of this neighborhood’s barely recognizable pulse and image. 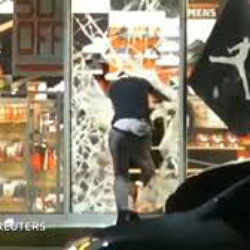 More importantly, this night of looting will prove to be the exact thing a police state needs, to exploit and exacerbate a citizen outcry, before it became an uncontrollable wildfire of public lunacy and fury. One that could have spread to a more valuable neighborhood. One that would mobilize militarized "police" units, better equipped than the men who were sent to Iraq, a decade ago. This force’s aggression, though, would be against unarmed civilians, doing the most American thing of all; speaking their mind in the face of their aggressors.

Unfortunately, this was merely the first night… 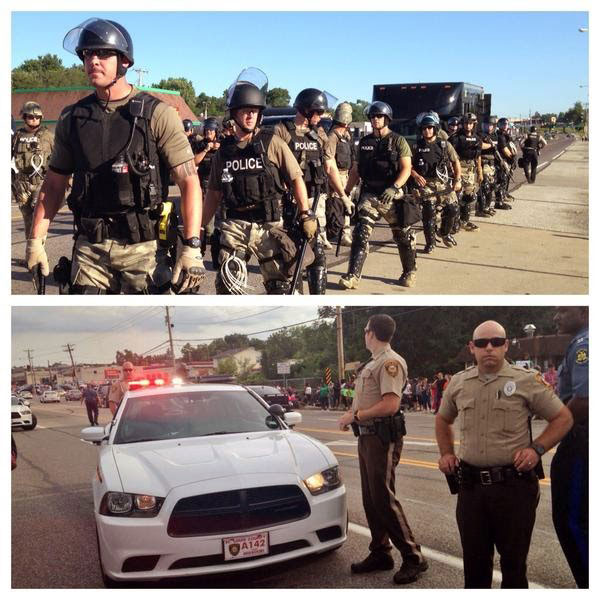