It is our pleasure to welcome Merlin Sheldrake, author of Entangled Life: How Fungi Make Our Worlds, Change Our Minds and Shape Our Futures, as our featured author for September.

In this excerpt from his book, Merlin vividly explores the extraordinary and integral role that fungi play in most of life’s processes. Yet despite this, there is still so little we understand. In his book, Merlin explores the hidden networks of these remarkable organisms; revealing how fungi provide us with crucial keys to a deeper understanding of our planet and ourselves.

Entangled Life How Fungi Make Our Worlds, Change Our Minds and Shape Our Futures

“This book may not be a psychedelic… but reading it left me not just moved but altered, eager to disseminate its message of what fungi can do.”
— THE NEW YORK TIMES

“A gorgeous book of literary nature writing… food for the soul.”
— THE WALL STREET JOURNAL

“This book rocked me into remembering that nature, especially fungal nature, is big and encompassing and creative and destructive. It reminded me that fungi are, like the Universe, sublime.”
— SCIENCE

Many of the most dramatic events on Earth have been – and continue to be – a result of fungal activity. Plants only made it out of the water around 500 million years ago because of their collaboration with fungi, which served as their root systems for tens of million years until plants could evolve their own. Today, over 90 per cent of plants depend on mycorrhizal fungi – from the Greek words for fungus (mykes) and root (rhiza) – which can link trees in shared networks sometimes referred to as the ‘Wood Wide Web’. This ancient association gave rise to all recognisable life on land, the future of which depends on the continued ability of plants and fungi to form healthy relationships.

To this day, new ecosystems on land are founded by fungi. When volcanic islands are made or glaciers retreat to reveal bare rock, lichens (pronounced LY-kens) – a union of fungi and algae or bacteria – are the first organisms to establish themselves, and to make the soil in which plants subsequently take root. In well-developed ecosystems soil would be rapidly sluiced off by rain were it not for the dense mesh of fungal tissue that holds it together. From deep sediments on the sea floor, to the surface of deserts, to frozen valleys in Antarctica, to our guts and orifices, there are few pockets of the globe where fungi can’t be found. Tens to hundreds of species can exist in the leaves and stems of a single plant. These fungi weave themselves through the gaps between plant cells in an intimate brocade and help to defend plants against disease. No plant grown under natural conditions has been found without these fungi; they are as much a part of planthood as leaves or roots.

The ability of fungi to prosper in such a variety of habitats depends on their diverse metabolic abilities. Metabolism is the art of chemical transformation. Fungi are metabolic wizards and can explore, scavenge and salvage ingeniously, their abilities rivalled only by bacteria. Using cocktails of potent enzymes and acids, fungi can break down some of the most stubborn substances on the planet, from lignin, wood’s toughest component, to rock, crude oil, polyurethane plastics and the explosive TNT. Few environments are too extreme. A species isolated from mining waste is one of the most radiation-resistant organisms ever discovered, and may help to clean up nuclear waste sites. The blasted nuclear reactor at Chernobyl is home to a large population of such fungi. A number of these radio-tolerant species even grow towards radioactive ‘hot’ particles, and appear to be able to harness radiation as a source of energy, as plants use the energy in sunlight.

We all live and breathe fungi, thanks to the prolific abilities of fungal fruiting bodies to disperse spores. Some species discharge spores explosively, which accelerate 10,000 times faster than a Space Shuttle directly after launch, reaching speeds of up to a hundred kilometres per hour – some of the quickest movements achieved by any living organism. Other species of fungi create their own microclimates: spores are carried upwards by a current of wind generated by mushrooms as water evaporates from their gills. Fungi produce around fifty megatonnes of spores each year – equivalent to the weight of 500,000 blue whales – making them the largest source of living particles in the air. Spores are found in clouds and influence the weather by triggering the formation of the water droplets that form rain, and ice crystals that form snow, sleet and hail.

Some fungi, like the yeasts that ferment sugar into alcohol and cause bread to rise, consist of single cells that multiply by budding into two. However, most fungi form networks of many cells known as hyphae (pronounced HY-fee): fine tubular structures that branch, fuse and tangle into the anarchic filigree of mycelium. Mycelium describes the most common of fungal habits, better thought of not as a thing, but as a process – an exploratory, irregular tendency. Water and nutrients flow through ecosystems within mycelial networks. The mycelium of some fungal species is electrically excitable and conducts waves of electrical activity along hyphae, analogous to the electrical impulses in animal nerve cells. 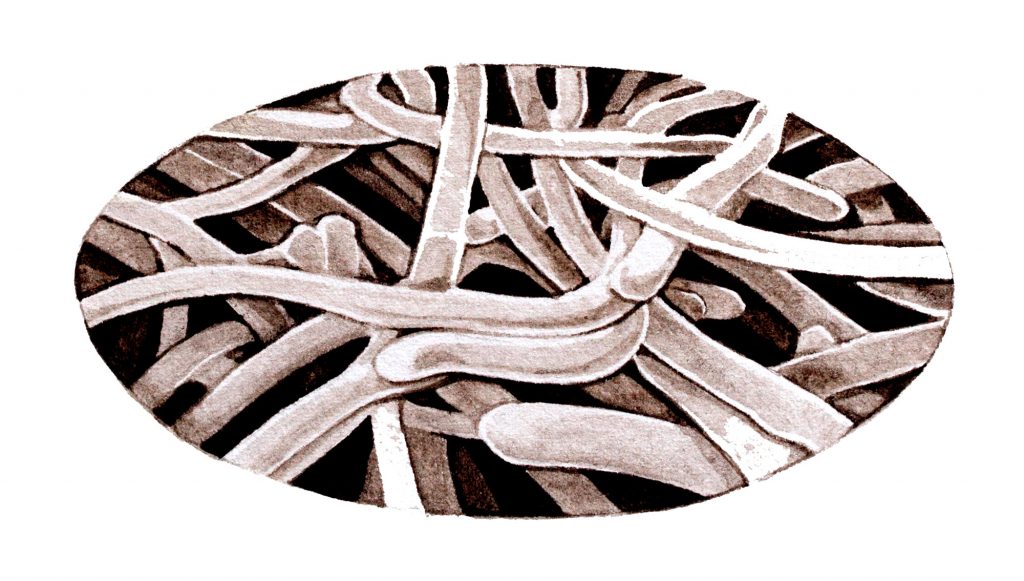 Hyphae make mycelium, but they also make more specialised structures. Fruiting bodies, such as mushrooms, arise from the felting together of hyphal strands. These organs can perform many feats besides expelling spores. Some, like truffles, produce aromas that have made them among the most expensive foods in the world. Others, like shaggy ink cap mushrooms (Coprinus comatus), can push their way through asphalt and lift heavy paving stones, although they are not themselves a tough material. Pick an ink cap and you can fry it up and eat it. Leave it in a jar, and its bright white flesh will deliquesce into a pitch-black ink over the course of a few days (the illustrations in this book were drawn with Coprinus ink).

Radical fungal technologies can help us respond to some of the many problems that arise from ongoing environmental devastation. Antiviral compounds produced by fungal mycelium reduce colony collapse disorder in honeybees. Voracious fungal appetites can be deployed to break down pollutants such as crude oil from oil spills, in a process known as ‘mycoremediation’. In ‘mycofiltration’, contaminated water is passed through mats of mycelium which filter out heavy metals and break down toxins. In ‘mycofabrication’, building materials and textiles are grown out of mycelium and replace plastics and leather in many applications. Fungal melanins, the pigments produced by radio-tolerant fungi, are a promising new source of radiation-resistant biomaterials.

Human societies have always pivoted around prodigious fungal metabolisms. A full litany of the chemical accomplishments of fungi would take months to recite. Yet despite their promise, and central role in many ancient human fascinations, fungi have received a tiny fraction of the attention given to animals and plants. The best estimate suggests that there are between 2.2 and 3.8 million species of fungi in the world – six to ten times the estimated number of plant species – meaning that a mere 6 per cent of all fungal species have been described. We are only just beginning to understand the intricacies and sophistications of fungal lives. 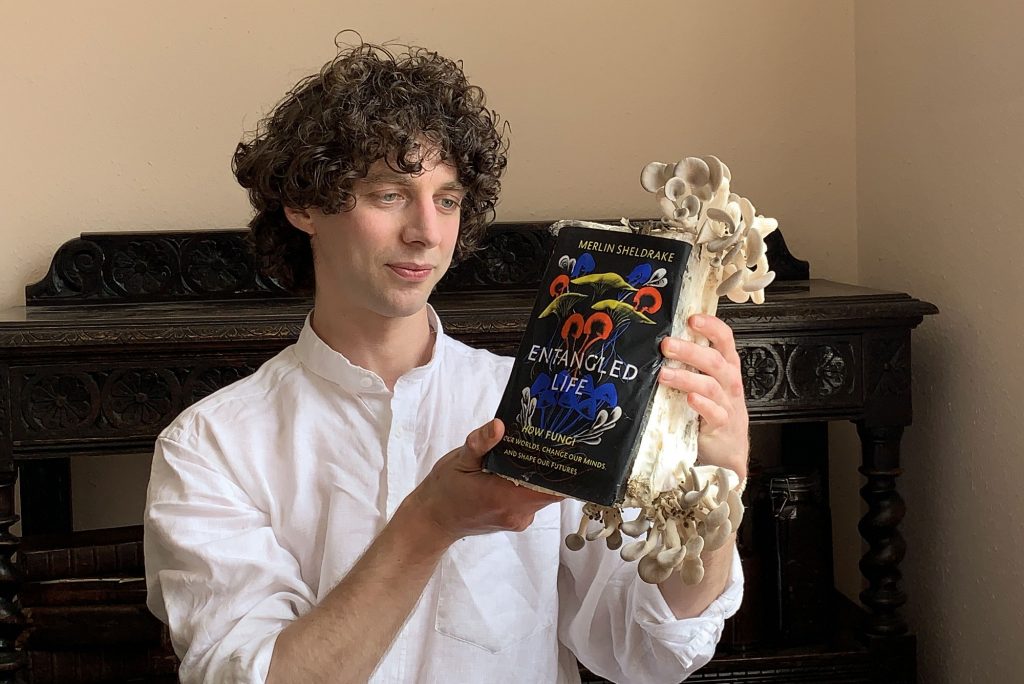 Entangled Life How Fungi Make Our Worlds, Change Our Minds and Shape Our Futures

“One of those rare books that can truly change the way you see the world around you… a mercurial, revelatory, impassioned, urgent, astounding, and necessary read.”
— Helen Macdonald, author of H is for Hawk

“A dazzling, vibrant, vision-changing book. This is a remarkable work by a remarkable writer.”
— Robert Macfarlane, author of Underland

“Grand and dizzying in how thoroughly it recalibrates our understanding of the natural world.”
— Ed Yong, author of I Contain Multitudes

“The natural world is more fantastic than any fantasy, so long as you have the means to perceive it. This book provides the means.”
— Jaron Lanier, author of You Are Not A Gadget

“A magical journey deep into the roots of Nature by an expert storyteller. A must read.”
— Paul Stamets, author of Mycelium Running

“It is impossible to put this book down.”
— Hans-Ulrich Obrist, Artistic Director of the Serpentine Galleries

“Sheldrake is passionate, deeply knowledgeable, and a wonderful writer.”
— Elizabeth Kolbert, author of The Sixth Extinction

“A revelation. Sheldrake engages us in a miraculous web of connections, interactions and communication that changes the way we need to look at life, the planet and ourselves.”
— Isabella Tree, author of Wilding

“I was completely unprepared for this book. It rolled over me like a tsunami, leaving the landscape rearranged but all the more beautiful.”
— Nicholas Humphrey, author of Soul Dust

“As hard to put down as a thrilling detective novel, and one of the best works of popular science writing that I have enjoyed in years.”
— Dennis McKenna, author (with Terence McKenna) of Psilocybin: Magic Mushroom Grower’s Guide

2 thoughts on “Entangled Life: How Fungi Make Our Worlds, Change Our Minds and Shape Our Futures”