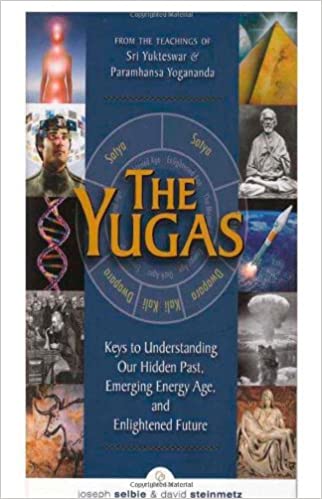 Keys to Understanding Our Hidden Past, Emerging Present and Future Enlightenment

For October 2010 Co-Authors of the Month we are pleased to welcome Joseph Selbie and David Steinmetz. Their new book, The Yugas: Keys to Understanding Our Hidden Past, Emerging Energy Age and Enlightened Future, brings clarity and understanding to the vast cycles human existence have endured. Please join the discussion on the AoM Message Boards and add your voice and thoughts to the vast spectrum of human consciousness…on the rise!

There are many intriguing examples of anomalous knowledge which existed in the ancient past: verified knowledge of anatomy and physiology and modern-like medical treatments in use as early as 2500 BC in Egypt, China and India, the precision construction of the Great Pyramid in 2600 BC (or perhaps earlier), and accurate knowledge of math and physics, including the size and nature of the atom, embedded in India’s Vedas dating back to the sixth millennium BC – just to name a few.

The field of alternative history has long sought the answer to where this advanced knowledge came from – and why it didn’t survive.

One theory, familiar to most of us, is that aliens came to earth in the distant past and gave knowledge to man that was beyond his comprehension. As the theory goes, when the aliens eventually left, the knowledge quickly died out because man wasn’t yet ready for it.

Another theory, sometimes put forward by apologists for mainstream archeology, is that advanced knowledge may have existed in the ancient past but it was due only to chance combinations of primitive technology and individual genius – serendipitous discovery. As the theory goes, when that particular genius or serendipitous circumstance was gone, the knowledge quickly died out because man wasn’t yet ready for it.

There is however another explanation for advanced knowledge in the past – one which comes to us from the ancient past itself – that does not rely on aliens or serendipity. The explanation is that man had more advanced consciousness in the past than he now possesses, and that it was this advanced consciousness, natural to man, that enabled him to develop advanced knowledge on his own without need for alien intervention or serendipity.

While this alternate explanation doesn’t rely on alien visitation it does not preclude it either. But instead of ancient aliens arriving at a planet full of primitives, the aliens may have been met with a population as advanced as themselves. Furthermore, man’s advanced consciousness in the past could well have enabled him be the one who traveled through the stars to visit other planets himself.

Common to this explanation as it comes to us from the ancient past is the notion that man’s consciousness goes through a cycle of development, that man’s awareness, perception, and abilities advance and then decline in a recurring cycle. This concept has been a part of the traditional cultural lore of numerous cultures as far back as anyone can determine. Perhaps best known to those of us in the West is the ancient Greek description of descending ages – from the Golden Age, through Silver and Bronze and finally into the Iron Age. The tradition of descending ages exists throughout the world. In Giorgio de Santillana’s, Hamlet’s Mill, he explores scores of such traditions.

Sri Yukteswar provides specific dates for the beginning and end of each age or yuga. Moreover, unlike most traditions of descending ages, in which man is said to still be at the nadir of his development, Sri Yukteswar states that man reached his nadir in 500 AD – but since then he has begun to advance once more – as you can see in the diagram below. 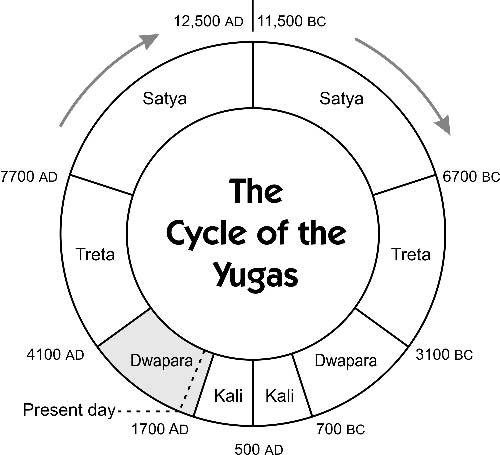 Case in Point: Treta Yuga and the Vedas

The Rig Veda, a collection of over 10,000 Sanskrit verses, is the oldest known spiritual work in the world – and can be dated to as early as 7300 BC. The Rig Veda is the wellspring of spiritual knowledge for what we know as Hinduism and has remained so for over nine thousand years. The Rig Veda is in Sanskrit, in all likelihood the oldest language on earth – and to this day it remains the most precise and internally consistent system of communication in the world. Sanskrit’s structure and grammar have been studied by developers of computer programming languages in order to help them create programming languages free of ambiguity.

The Vedas were accurately passed down from generation to generation in India by virtue of an extremely methodical system of oral transmission which involved chanting each verse in ten different ways to crosscheck for integrity. It is believed that only two words have become corrupted in over nine thousand years.

Such an effective and elaborate system of oral transmission is amazing in itself, but more amazing yet is that there is a large body of astronomical, mathematical, and physical knowledge embedded in the Vedas, knowledge popularly believed not to have been discovered in Europe until the Renaissance and later. Contemporary scientists have found the following knowledge embedded in the Vedas:

How does one explain this?

The Vedas are, after all, spiritual tools, sacred writ. The verses of the Vedas are mantras whose purpose is to raise the consciousness of one who chants them. The verses of the Vedas express an intimate relationship of man and Divine. Yet at the same time they contain scientific knowledge – knowledge that is currently believed to be attainable only through sequentially developed mathematics, scientific instruments such as the telescope, and a rigorously applied methodology of experimentation.

According to Sri Yukteswar, in the most recent Treta Yuga (6700 BC to 3100 BC), during which the Vedas were composed, man was able to directly comprehend that everything is made up of ideas or thoughts. Treta Yuga man’s attunement to thought also made him highly intuitive – able to perceive truths without the need for the cumbersome process of experimentation.

If man possessed such awareness and comprehension in the ancient past then he would have had no need to use the tools of science as we understand them today. He would have perceived these truths directly through intuition. The “scientific” truths of the Vedas were perceived right along with spiritual truths – part of the same indivisible reality.

If such an explanation seems farfetched, let me offer you an interesting example of intuitively derived – and very precise – scientific information that was discovered intuitively around the turn of the twentieth century.

Many years after the passing of Besant and Leadbeater, physicist Dr. Steven M. Phillips began to study their journals. He published his findings in 1980 in Extra-Sensory Perception of Quarks. A thorough examination of their psychic investigations led Phillips to conclude that Besant and Leadbeater had accurately described the number and nature of quarks – sub-atomic particles that make up the larger structures of the nucleus of the atom, such as protons and neutrons – years ahead of their discovery by modern physics.

The yugas, as explained by Sri Yukteswar, require no outside influence to explain the mysteries of the past. The yugas simply say that as man’s consciousness advances, his knowledge, perception, and abilities advance as well. Man doesn’t merely know more as the yugas advance – he becomes more.

My co-author, David Steinmetz, found an amazingly clear archeological and historical footprint to match the dates and consciousness of each yuga. Nor did we have to rely on the strange, unusual or controversial to see the footprint. A clear view of the arc of the yugas can be seen in the broad trends and accepted facts of the past and present. We believe that the yuga cycle could serve as a framework for the discoveries and work of many researchers and authors in the field of alternative history.

Joseph studied ancient Western cultures at the University of Colorado and ancient Eastern cultures at UC Berkeley. He has had a keen interest in ancient history since grade school. He has taught and lectured on the principles of Eastern philosophy for over thirty years. Joseph lives with his wife at Ananda Village, a spiritual community in Northern California.

David’s background includes forty years of scientific work, including astronomy at the University of Arizona and optics at Xerox Palo Alto Research Center. Currently, he teaches about the yugas, ancient world cultures, astronomy, and physics at the Ananda College of Living Wisdom. He has been writing and lecturing on the topic of the yugas for more than a decade. David lives with his wife at Ananda Village, a spiritual community in Northern California.

Keys to Understanding Our Hidden Past, Emerging Present and Future Enlightenment