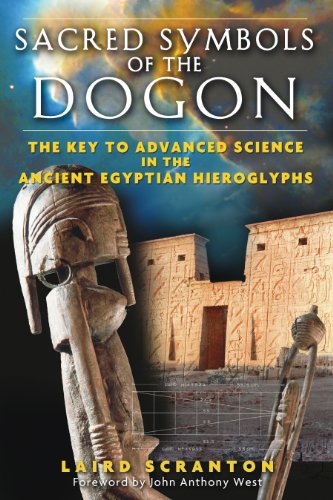 Sacred Symbols of the Dogon

The Key to Advanced Science in the Ancient Egyptian Hieroglyphs

Laird Scranton has established himself firmly as a leading interpreter of the mystery of the Dogon tribe of West Africa and their ancient Egyptian heritage. Laird will join us during August 2008 on our Author of the Month message board to answer queries from posters and to discuss his work

The study of ancient symbol and myth is often hampered by evidence which, for any given culture, may have become fragmented over time. Fortunately, our ability to ‘read past’ these apparent gaps in evidence is often enhanced by the parallel nature of myth and symbol in different cultures. So striking are the similarities between the cosmological myths of ancient cultures – and so thin the likely trail of transmission from one culture to another by conventional means – that Carl Jung was impelled to propose his famous theory of archetypes, postulating innate psychology as a credible way to explain their near-global appearance. It is these same abiding similarities in world myth and symbol that give rise to the study of comparative cosmology – a discipline in which similar symbolic systems are closely compared as a technique for revealing potential new insights into the nature of ancient cosmology.

Stranding squarely at the crossroads of comparative cosmology we find the Dogon tribe of modern-day Mali. Studied exhaustively by French anthropologists Marcel Griaule and Germaine Dieterlen in the nineteen thirties, forties and fifties, the Dogon were documented as preserving a secret cosmological tradition that is cast in the familiar themes, symbols and storylines of the classic ancient cosmologies. Moreover, the Dogon priests seemed to retain a clear sense of the deepest meanings of their own symbols, which they were able to convey in modern terms to the French researchers.

The potential importance of Dogon myth and symbol as a pivotal resource for the study of comparative cosmology is underscored by several suggestive points: First, the Dogon share many key cultural and civic traditions in common with ancient Egypt – such as the founding of districts and villages in deliberate pairs, called Upper and Lower. They observe the same calendars as the ancient Egyptians, and the Dogon priests maintain a mode of dress similar to that of the ancient Egyptian priests. The Dogon still make use of many of the same agricultural methods that were practiced in ancient Egypt. Furthermore, the Dogon share important religious rituals – such as the wearing of skull caps and prayer shawls, the practice of circumcision, and the observance of a Jubilee year – in common with Judaism as well as ancient Egypt.

Conceptually, Dogon cosmology begins with an aligned pyramid-like structure called a granary, which the Dogon priests tell us defines a world-system or plan. In many ways, the structure calls to mind an early form of a pyramid, and several of its key structural and symbolic features are found reflected in the pyramids and similar aligned structures of Egypt, India, China, and the Americas.

Controversy relating to the Dogon began in the 1970’s, with the publication of Robert K.G. Temple’s book The Sirius Mystery, which suggested that the outwardly-primitive Dogon were in possession of unexpected astronomical facts relating to the stars of Sirius. Temple claimed that the Dogon knew both of the existence of a tiny, dense dwarf star called Sirius B that is locked in a binary relationship with the larger sun-like star Sirius A, and defined the correct orbital period for the two stars – details that should have been unknowable without the aid of a powerful telescope. Since these same facts had already been acknowledged by Western scientists by the time they were documented for the Dogon, popular researcher Carl Sagan suggested that the Dogon may have simply learned the facts from some knowledgeable modern visitor, then incorporated them into their pre-existing body of cosmological knowledge.

During the 1980’s, a second wave of researchers, including Belgian anthropologist Walter Van Beek, restudied the Dogon. Although Griaule and Dieterlen had previously characterized Dogon cosmology as a closely-held secret tradition that was largely unknown to the average tribesperson, these secondary researchers reported an inability to recreate Griaule and Dieterlen’s findings. On that basis, Professor Van Beek first concluded that much of what Griaule reported may have been fabricated on his behalf by what he perceived as overly-obliging Dogon priests. Later, Van Beek went a step further by suggesting that the classic Dogon granary form, as reported by Griaule, was in fact, a structure known only to Griaule. 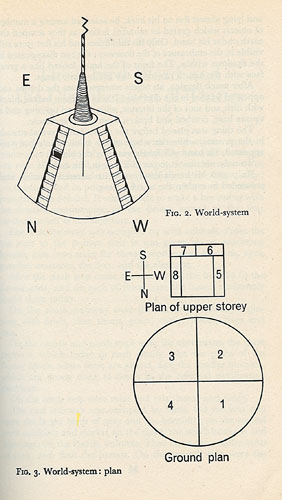 My own studies in Dogon cosmology have uncovered what appear to be intractable difficulties with the key objections of both Carl Sagan and Walter Van Beek to Griaule’s Dogon cosmology. First, further exploration shows that the body of unexpected scientific details known by the Dogon seems to go well beyond simple facts of astronomy. The Dogon priests say that their cosmology describes how a tribal god named Amma created matter. My first book The Science of the Dogon: Decoding the African Mystery Tradition (initially self-published under the title Hidden Meanings: A Study of the Founding Symbols of Civilization) illustrates through side-by-side comparisons that the Dogon descriptions and drawings relating to the formation of matter run directly parallel to recent modern scientific descriptions and diagrams. Much of the specific information that appears to be reflected in Dogon cosmology was not known to modern scientists at the time it was documented by Griaule and Dieterlen in 1956, and so could not have been reasonably transmitted to the Dogon by any modern visitor. Furthermore, Dogon descriptions that relate to the formation of matter are couched in what appear to be ancient Egyptian words, and supported by drawings that often take the same shapes as Egyptian hieroglyphs. It seems unlikely that any modern visitor who could have introduced the modern Dogon to such subtle concepts would have done so using obscure but appropriate ancient Egyptian words and symbols.

Furthermore – apparently unknown to this second wave of Dogon anthropologists, including ProfessorVan Beek – are the many abiding similarities that exist between the plan and symbolism of the classic Dogon granary as Griaule describes it and a Buddhist stupa – a traditional aligned ritual structure that is central to Buddhist cosmology. Stupas are found commonly throughout India and Asia. (For specific details on the plan and symbolism of a Buddhist stupa, see The Symbolism of the Stupa by Adrian Snodgrass of the University of West Sydney, Australia. Snodgrass is widely recognized as a leading authority on Buddhist architecture and symbolism). The intimate parallels that appear to exist between the two structures strongly suggest that the Dogon cosmological system reported by Griaule constitutes a wholly valid and self-consistent form. For Professor Van Beek’s view to be valid, we would have to believe that the Dogon priests were capable of casually fabricating much of Buddhism. Likewise, the ostensibly-unknown architectural form that Griaule reported in great detail is, in fact, quite familiar to large populations across both India and Asia.

Moreover, the Buddhist and Dogon stupa/granary structure evokes a well-defined, cosmological framework within which many of the seemingly fragmented elements of ancient Egyptian cosmology appear to fit. For example, where the Dogon define eight paired male/female ancestors, the Egyptians define eight paired male/female Ennead or Ogdoad gods and goddesses. Where the Dogon define a jackal, symbolic of the concept of disorder, associated with a Second World or Other World, the Egyptians define a jackal symbolic of disorder, associated with an Underworld. Where the Egyptians define a canine judge of Good and Evil, the Dogon define a fox who is cast as the judge between Truth and Error. Such well-matched details enable us effectively to synchronize three pivotal cosmologies – those of the Dogon, of Buddhism, and of ancient Egypt.

Table A, the Egyptian Sun Glyph

Once properly synchronized, the on-going study of comparative cosmology helps us to effectively ‘fill in the gaps’ in fragmented episodes of one cosmology using well-defined parallel elements of another. Likewise, it allows us to reconcile important differences that sometimes crop up between the similar cosmologies of different cultures. For example, in ancient Egypt, matter is said to have been woven by the Mother Goddess Neith, using a shuttle and a loom. For the Dogon, matter is woven in a spiral web by a spider whose name means ‘mother’. Buddhism reconciles these views by purporting that matter is woven in a spiral web by a spider as if on a loom with a shuttle. Through these kinds of comparisons, we are able to make our way to the conceptual bottom – so to speak – of the cosmology and to recreate the likely forms that may have comprised an original parent cosmology. From there, we have no difficulty understanding spider symbolism as it relates to the Greek goddess Athena, a later deity who is traditionally associated with Neith.

As an important side-benefit to the study of comparative cosmology, we evolve a growing list of well-defined symbolic shapes – symbols whose ultimate meanings we believe we firmly know based on the consensus opinion of several parallel cosmologies. The careful observer will note that many of these symbolic shapes take the same form as written Egyptian glyphs. In some instances, such as that of the Egyptian sun glyph, the shape is evoked within the cosmology in association with the very same meanings that are traditionally assigned to the Egyptian glyph – in the case of the sun glyph shape, the concept of the sun, a day, and a period of time. The absence of a formal system of written language among the Dogon suggests that the cosmology may have preceded written language in ancient Egypt, while the concurrence of drawn Dogon cosmological shapes and meanings with the written Egyptian glyphs suggests that the earliest written characters may have been adapted from key shapes within the cosmology.

Now, if the traditional meanings of the sun glyph shape coincide with the defined meanings of the shape in Dogon and Buddhist cosmology, then we must ask ourselves whether the Dogon and Buddhist definitions of other cosmological shapes might also apply properly to counterpart Egyptian glyphs. This question became the premise of my second book Sacred Symbols of the Dogon: The Key to Advanced Science in the Ancient Egyptian Hieroglyphs. I approached the topic starting with thirty well-defined shapes from Dogon cosmology and tried to apply their meanings to corresponding glyphs of ancient Egyptian words, substituting concepts for glyphs to produce a kind of ideographic sentence. Soon I discovered that the Egyptian word for week, which is written with the sun glyph (meaning ‘day’) and the number ten, provided me with a correct definition of the ancient Egyptian ten-day week. Looking next to other Egyptian words that express concepts relating to units of time (day, month, season, and year) I found that each word could similarly be seen to define its own traditional meaning. The clear suggestion was that the study of comparative cosmology might provide us with an alternate way to understand Egyptian hieroglyphic words.

The Velikovsky Heresies Worlds in Collision and Ancient Catastrophes Revisited

The Science of the Dogon

Sacred Symbols of the Dogon