Quantification:
Illustrations from the Creator of Secrets In Plain Sight

Please welcome for September 2014 Author of the Month Scott Onstott. Scott is the creator of the Secrets In Plain Sight video series, an inspiring exploration of great art, architecture, and urban design unveiling the unlikely intersection of geometry, mysticism, physics, music, astronomy, and world history. Join Scott on the AoM Message Boards during Sept., to interact, discuss and explore the mysteries in numbers and measurement that surrounds us all.

My work and research has led me to believe that measurement is a doorway into the mysteries. Last year, I shot this photo of the symbol over the door into La Maddalena round church in Venice. When I got home I did a geometric analysis in AutoCAD and discovered that the golden rectangle beautifully measures the gap between the equilateral triangle and its circumcircle, which I later illustrated in my book Quantification. In addition, the smaller interwoven circle and triangle have the same areas. 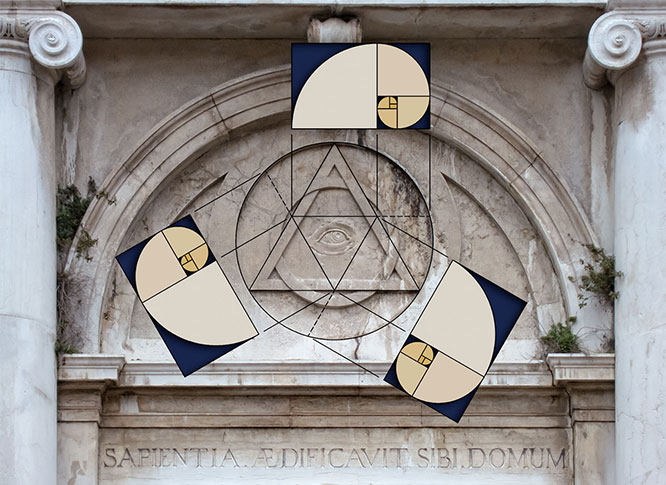 This last observation reminded me of another discovery I had made earlier—the golden rectangle is the bridge to making the cube commensurate with the sphere. This comparison of volumes is a higher-dimensional analogy to triangulating the circle by area. I also rewrote the traditional formula for the volume of a sphere to emphasize the important pattern of repeating threes, which itself suggests a triangle or trinity. 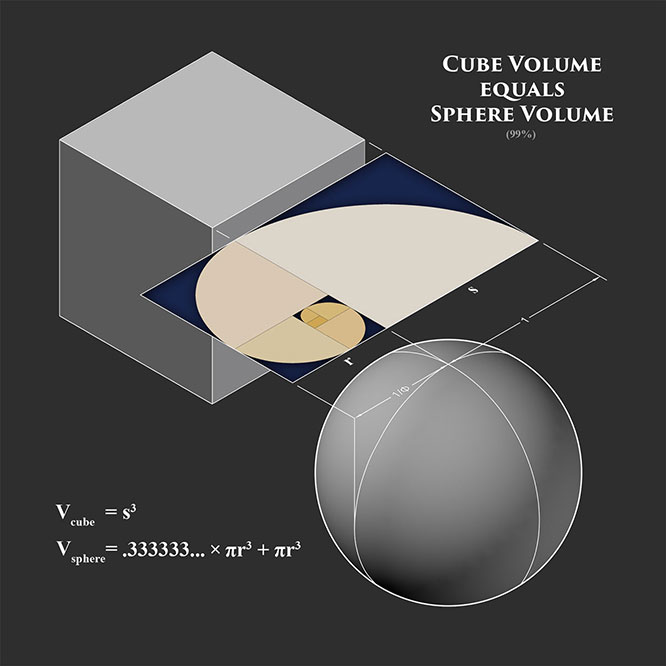 The Great Pyramid’s elevation can be closely approximated with two golden rectangles tilted to meet at an apex. I found that Leonardo’s Vitruvian Man (which I’ve revised to include the other half of humanity) resonates with the golden geometry. The lines converging on the navel suggest that the human body was made to golden measure. 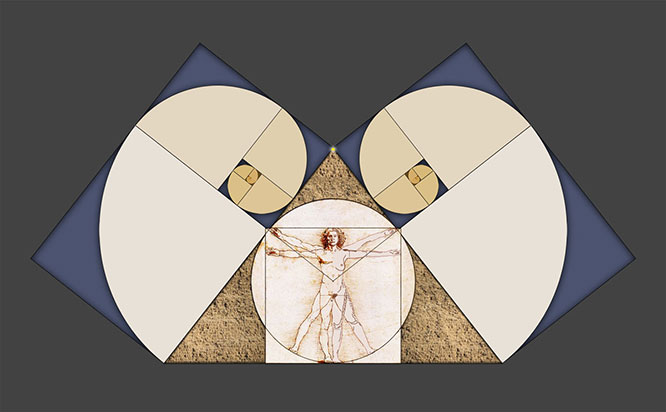 I made the following image called The Mystery of 273 to highlight the many phenomena converging on these three digits, including the relative proportion of Moon to Earth, the month, cycles of human reproduction, and water—that amazing substance which comprises the majority of the molecules of our bodies and the majority of our planet’s surface. All of this is encoded in squaring the circle. 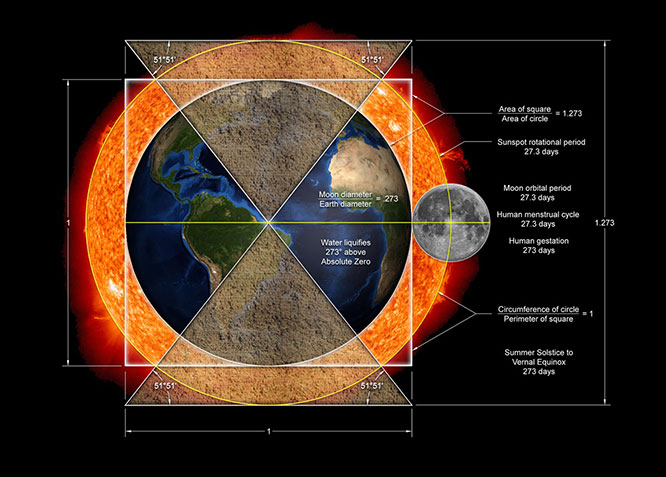 By inscribing an equilateral triangle within the Great Pyramid’s elevation, an amazing resonance occurs with imperial units of measure. The edge length is 555.5 feet, which equals 6666 inches. The inner equilateral triangle surrounding the all-seeing-eye of Horus measures 3333 inches on each of its 3 edges.

These measurements appear when you use the base edge length of 755.775 feet. If you multiply by 4 to calculate the complete base perimeter, the answer is 1007.7 yards. This is the base perimeter J.H. Cole surveyed in 1925. In 1880, Prof. W. M. Flinders Petrie surveyed it less than a third of an inch smaller at 1007.6 yards but I think Cole was correct based on the resonances which emerge based on a mean pyramid edge length of 755.775 feet.

I’ll address the question of how the ancient Egyptians could have been using what we know as the English foot. Instead of reflexively dismissing this as impossible, let us temporarily set this important issue aside so we can perceive another encoding in the Great Pyramid. 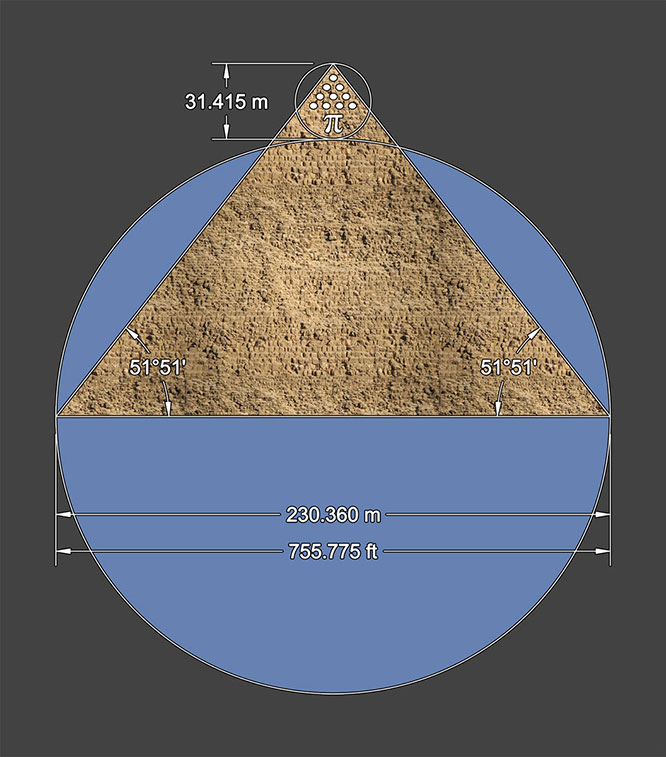 The word geometry literally means earth-measure. Systems of units that are based on sacred geometry that might have been lost in a cataclysm or forgotten over time can be rediscovered by subsequent cultures by accurately measuring the Earth. John Michell and Robin Heath showed in The Lost Science of Measuring the Earth (Adventures Unlimited Press 2006) that the Imperial system is based on Earth measure. They made the following claim:

In other words the number of days in a solar year times the number of degrees in a circle times a scaling value of 1000 equals the Earth’s maximum circumference in feet. Note that the base-10 numeral system is implied in this equation.

The system used by GPS satellites, WGS84, lists the Earth’s equatorial circumference as 24,901.4 miles and if you do the math, the accuracy of the above claim is 99.99%. This is an astounding level of accuracy with error down to one-hundredth of one percent; it is off by just 1 mile!

The metric system was originally based on measuring the Earth’s meridian circumference. The distance from the equator to the North pole was divided into 10 million parts called metres.

I analyzed the combined diameters of Earth and Moon, thinking of our planet and its satellite as a system. The polar diameters of Earth & Moon together equal 10000 x Φ kilometres (99.97%). Φ is the golden ratio, which is approximately 1.61803…

The metre therefore resonates beautifully with the Earth and the Moon. Perhaps it was merely rediscovered in the 18th century? That would explain how we find it encoded in the Great Pyramid today. 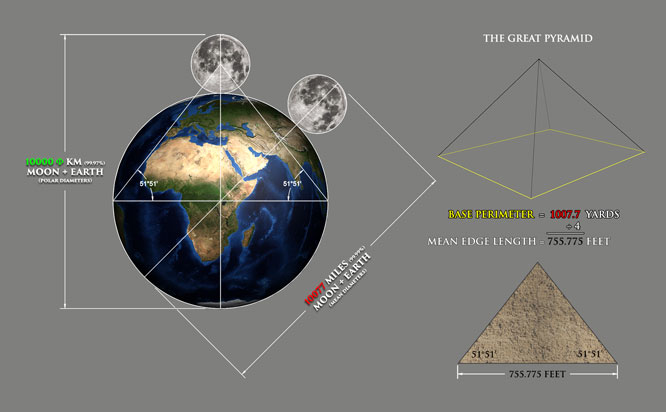 The mean diameters of Earth & Moon together equal 10077 miles (99.99%). Remember, the base perimeter of the Great Pyramid is 1007.7 yards. These are the same digits but they measure distances in different units. This pattern is one I see time and time again suggesting that the digits matter most.

The nautical mile is another interesting unit, being a distance that is approximately one minute of arc measured along any meridian. There are 6x6x6x100 minutes of arc in the meridian circumference.

By international convention, one nautical mile is defined as 1852 metres. It’s curious but 1851.85 yards is exactly 5555.55 feet. And 5555.55 feet is exactly 66,666.6 inches. My measurements have repeatedly turned up distances with repeating digits and I believe these are also a key.

By inscribing a square rotated 45° in the elevation of the Great Pyramid amazing resonances appear. I circumscribed the square with a circle and placed a 3D model of the Earth inside and then rotated the Earth on axis so that Giza was on the centerline. Adding the human figure seated in a meditation posture revealed that the Nile corresponds to a meandering flow of kundalini energy from the heart to the pineal gland. 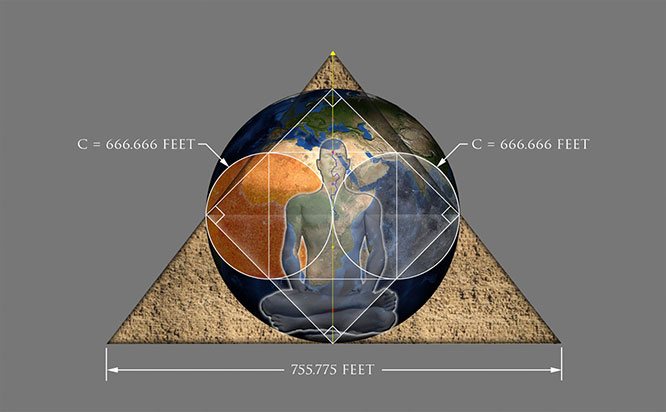 Simultaneously the same sacred geometry encodes a profusion of repeating sevens revealed in the following illustration. 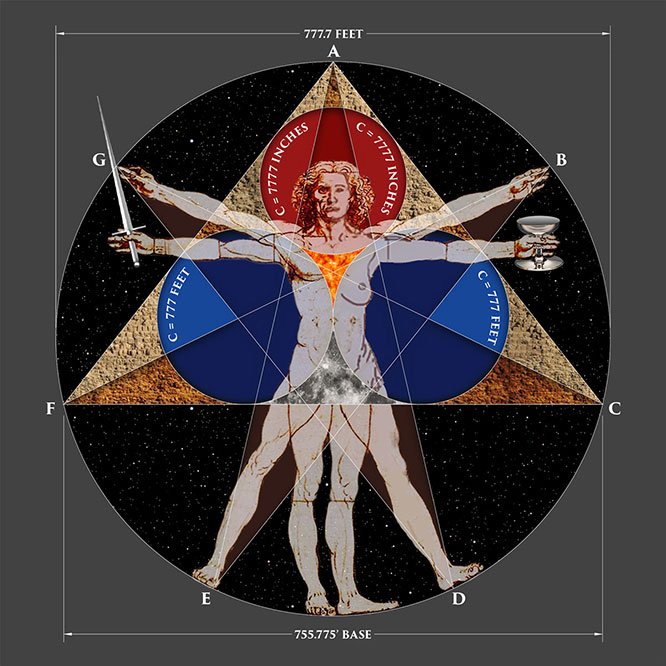 Sacred geometry is scale-invariant so it can be used to measure anything from the body, to buildings, cities, the Earth and beyond.

The Great Pyramid was originally clad in highly polished white limestone casing stones. A few of the casing stones survived and that’s how we know the slope angle of the pyramid is 51°51’ and can therefore calculate that its design height was 481 feet.

The Great Pyramid must have looked like a gleaming white mountain when it was built. Strangely enough the highest peak in Europe, Mont Blanc, is 4810 meters in elevation.

Mont Blanc is 481 kilometers from the Louvre Pyramid, which was constructed to match the Great Pyramid’s slope angle. The Louvre Pyramid is the skylight that illuminates the entrance to the world’s most visited museum.

I look at distances between sacred sites quite often in my work. For example, the distance between the Kaaba in Mecca and the Western Wall in Jerusalem is precisely 666.6 nautical miles. Was this intentional or is it just a coincidence? 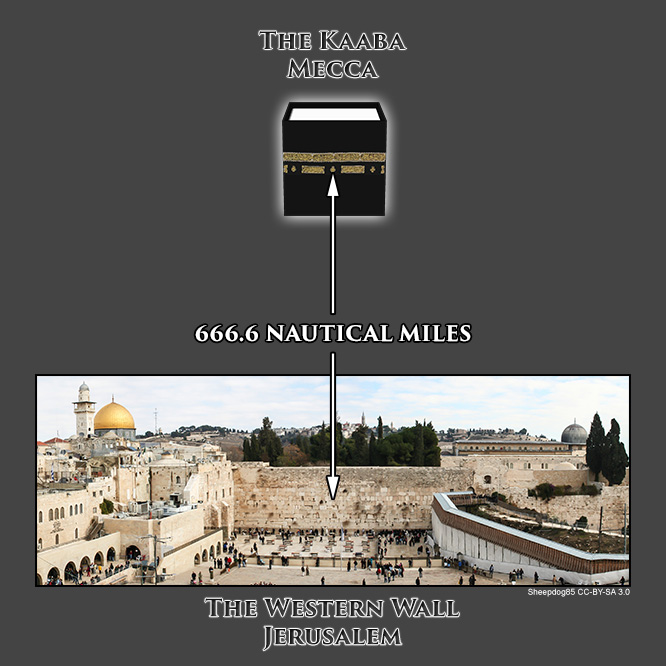 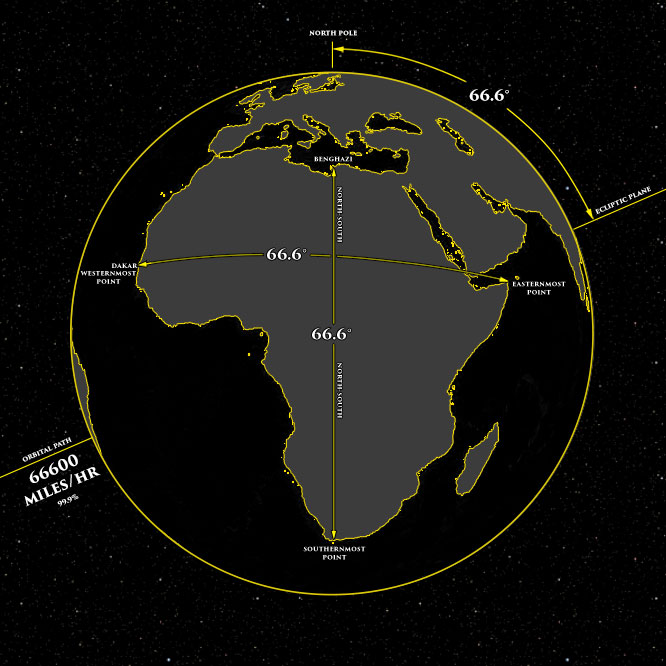 I am amazed that I have found so many significant Earth measurements with these repeating sixes. How can this be? Each of us will undoubtedly interpret this data quite differently.

“We don’t see things as they are; we see them as we are.” -Anaïs Nin

This leads me finally to another epiphany (e-π-Φ-ny) I had, that the infinitesimal gap in what would otherwise be a perfect Pythagorean triangle connecting e, π, and Φ suggests the question, “Why can’t we ever rationalize the transcendental?” 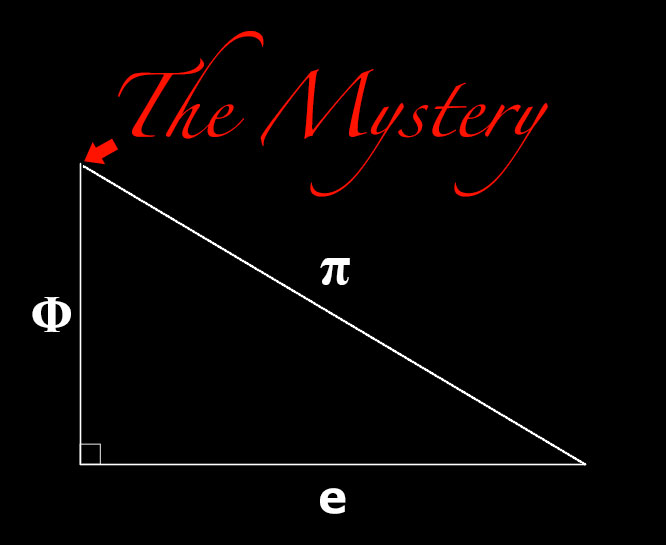 Logically, the answer is that it is an irreducible eternal mystery.

There is lots of free content on his blog at secretsinplainsight.com/blog

Scott Onstott is the creator of the Secrets In Plain Sight video series, an inspiring exploration of great art, architecture, and urban design unveiling the unlikely intersection of geometry, mysticism, physics, music, astronomy, and world history. Secrets In Plain Sight has been seen by more than 3 million people to date. He is also the author of 11 technical books on architectural software and 4 more books on esoteric subjects. Scott just published Quantification, a book of his thought-provoking color illustrations. Quantification examines patterns in the Great Pyramid, in the human body and in the Earth, and reveals uncanny distances between sacred sites. Scott has a degree in architecture and worked designing corporate interiors for a decade in San Francisco before becoming an independent teacher, author and filmmaker.