Edward Nightingale has published a follow-up article to support his theories which you can read here.

I am submitting a follow-up article that is focused more on the pyramids, their measure and connection to the precessional cycle that may help the reader to better understand the article The Leo, Orion Relationship. The Giza Pyramids and the Precessional Cycle article covers topics that are discussed regularly on GrahamHancock.com and hopefully will generate more discussion. This article will also provide more of a foundation that fully supports the new data I have presented on the precessional cycle encoded at Giza.

The architects, engineers and astronomers that were behind the design of the repository at Giza used a specific template consisting of a circle with a diameter of 9 units and a square of 8 x 8 of the same units. The circle with a diameter of 9 units has the area of 63.6428 when calculated. A square with a side length of 8 of the same size units, has an area of 64. This simple calculation approximates the area of a circle. The 9 unit circle and the 8 x 8 square are used as the survey plat for the design of the Giza repository. It is also a fundamental concept of land management used in many ancient cultures 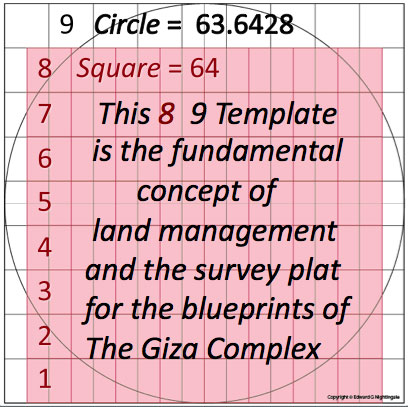 Beginning with the 8 x 8 grid the designers applied numbers to the grid to create a coordinate system. The numbers applied to the 8 x 8 square are given to us by Plato in his book Timeaus as the Lambda sequence stating that these were the numbers that God used to create the "Cosmic Soul". Lambda is the 11th letter of the Greek alphabet. The Lambda sequence of numbers given by Plato are, (1,2,4,8 and 1,3,9,27) a doubling sequence (x2) and a tripling sequence (x3). The doubling sequence applied to the X axis (down the left side of the 8 x 8) and a tripling sequence 1,3,9,27) across the top. These numbers continue both down and across to complete the 8 x 8 square. 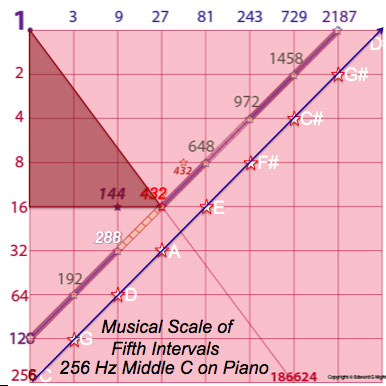 There are two diagonal scales shown within the grid, one beginning at 256, this is a Musical scale of perfect fifth intervals. 256 Hertz,(a measure of frequency) is a middle C note on a piano.

The second scale beginning at 128 is where the designers obtained all the units of measure, the inch, foot, and six different cubit lengths. These cubits measurements are, the Light Cubit, the Root Cubit, Royal Cubit, Canonical, Geographic and the Sacred Cubits. These units are all related to each other by specific fractions. 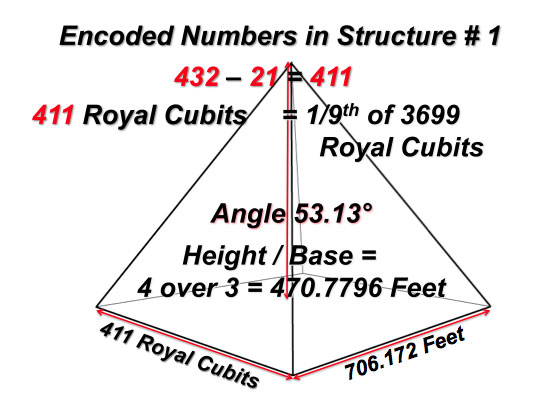 To determine the base length of Khufu (G1) the Great Pyramid the number 432 is multiplied by 21 = 9072. The angle of Khufu (G1) is created by the relationship of the circle to the approximate Phi division(13/21 of the Fibonacci sequence) of the square. The division creates a Golden Rectangle in which a Fibonacci Spiral is created. The angle is 51.84 degrees. 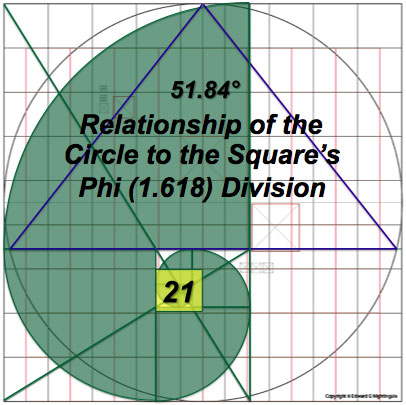 The numbers imbedded within this structure, Khufu or G1, a few are shown in this graphic, they include the units of measure, the inch, foot, and six different cubit lengths. The Light Cubit, the Root Cubit, Royal Cubit, Canonical, Geographic and the Sacred Cubits. These units are all related to each other by specific fractions.

These units are all created from this original equation of 432 divided by 21 = 20.571428. This is the KEY number or unit from which all other units of measure are created and is designated the value of Inches. The length of 20.571428 Inches is equal to the length of 1 Root Cubit. From this number, all related cubit dimensions are derived by adding specific fractions to each creating the next cubit length. 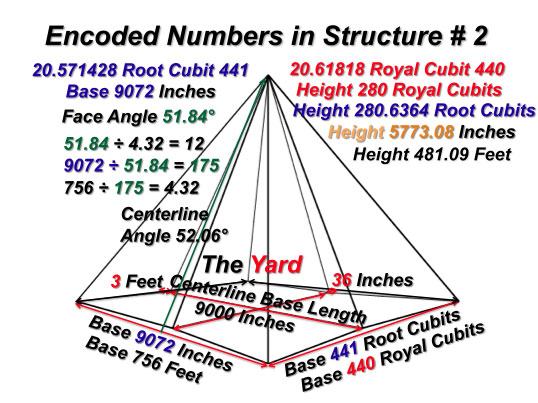 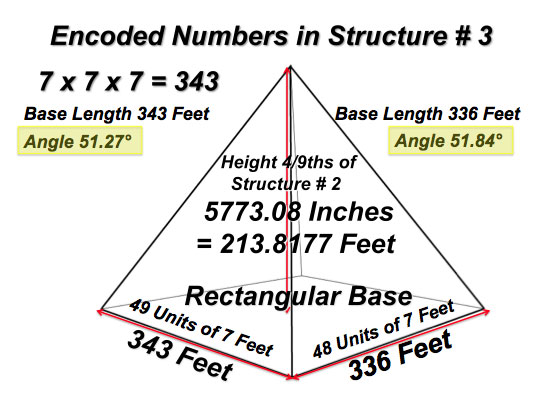 If what I have presented is factual, then it will be easily confirmed or not by what we observe from the view of the Sphinx using star viewing software, in this case Stellarium software.

This first image of the sky is viewed from the Sphinx on the (binary) date of 12/21/2012 0hrs 0min 0sec, the end/beginning of the precessional cycle. This date is by design and is precisely sunrise from the view of the Sphinx. The alignment of the Galactic Plane (in white) and the Ecliptic (in red) create an X and intersect with the Sun at precisely Sunrise. Note: The atmosphere and ground are not shown is these two images for clarity. 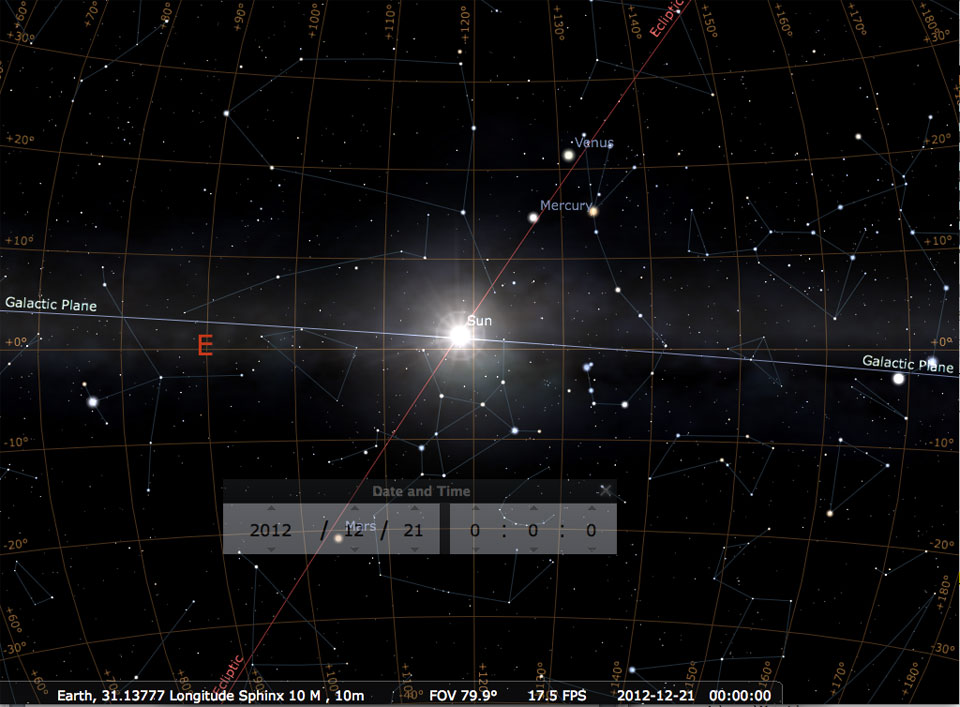 The Sun is rising approximately 27 degrees South of East on the horizon.

I have proposed that 12/21/2012 as the end of one cycle and the beginning of another. If I am correct with the calculations gleaned from the design of the three main pyramids, we should witness this same Galactic/ Ecliptic/Sun alignment forming an X with the Sun, 26460 years before 2013. 26460 – 2013 – 24447BC. This image is taken in the year -24447 BC at sunrise. Take notice of the hours and minutes this sunrise occurs. 20hrs and 12minutes after the sunrise recorded in 2012. This alignment only occurs on these two dates with a cycle duration of 26460 years. It is most interesting to note, and no mere coincidence that the angle of the Galactic Plane is 23.5 degrees off 90 degrees, (the pole or axis of the Earth) to the Horizon. 23.5 degrees is the angle of the tilt of Earths axis to the Ecliptic. Also the angle of the ecliptic to the Horizon is 53.13 degrees, the angle of the Pythagorean 3,4,5 Triangle, the slope angle of Khafre (G2). 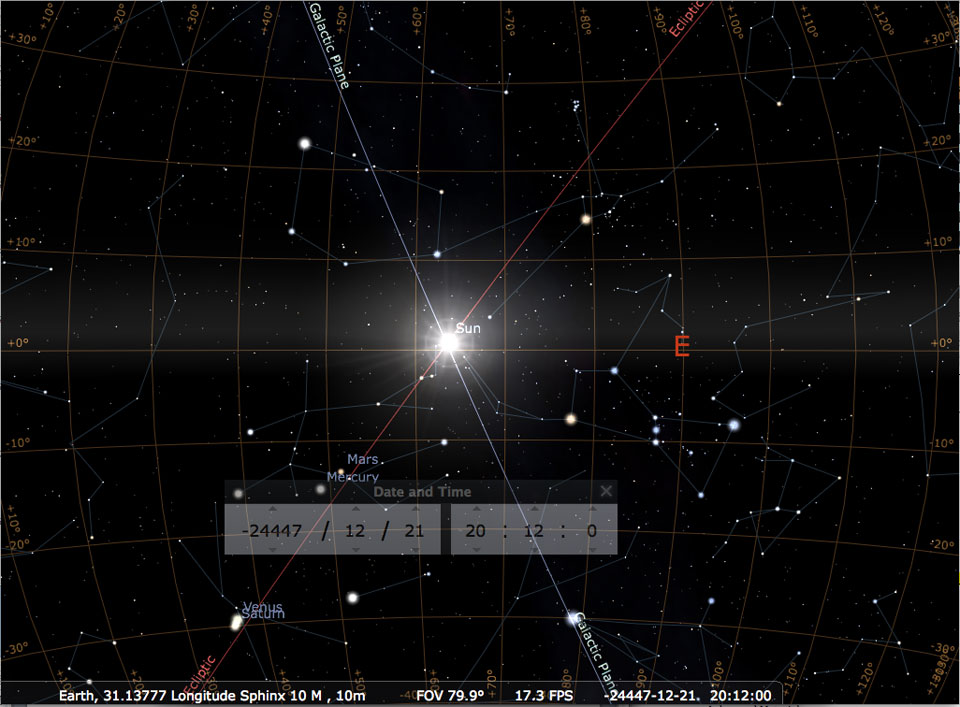 In my article The Leo, Orion Relationship [http://www.grahamhancock.com/forum/NightingaleE3.php] I suggested that the designers of Giza encoded the trajectory of our Sun, Sirius and the Pleiades as spiral in nature, originating from the Great Orion Nebula, indexing with the three pyramids as the Orion Correlation Theory states. The Leo aspect of the relationship is the spin view of the Ecliptic.

I have demonstrated a model of the precessional cycle with a beginning and completion. I also propose that certain structures were constructed at precise points and intervals of this cycle. These intervals relate directly to the geological and other evidence of catastrophic events on Earth as documented by Randall Carlson.

The implications and ramifications as a result of the information presented here and in The Giza Template, Temple Graal, Earth Measure are left for the reader to consider.

For more in depth information the book, The Giza Template Temple Graal, Earth Measure is available through Amazon.com at this address:

Edward Nightingale is an independent researcher, author and speaker who as a Master Woodworker with over 33 years of drawing, measuring and building experience has spent the past 17 years utilizing these skill sets to reverse engineer the Giza Complex.

Edward travelled to Egypt in 1997 in search of evidence for his theory on the architectural design of the Giza pyramids and the Sphinx, the results of his efforts are published in his new book, The Giza Template: Temple Graal, Earth Measure. The book documents the step by step design that the architects of Giza used to encode highly scientific data into geometric and mathematical information to be preserved and passed on to future generations.

Edward’s claims are backed with precise geometry, mathematics, satellite imaging, astronomical charting and cosmology that can be reproduced using the scientific method.

Edward is working on a sequel, Heavens Measure to follow his book Earth Measure.

One thought on “The Giza Pyramids and the Precessional Cycle”