In the Realm of Hungry Ghosts Close Encounters with Addiction

When the Body Says No The Cost of Hidden Stress

It is with great pleasure that we introduce our Author of the Month for October, Dr. Gabor Maté, with his new book, In the Realm of Hungry Ghosts.

Countering prevailing notions of addiction as either a genetic disease or an individual moral failure, Dr. Maté presents an eloquent case that addiction–all addiction–is in fact a case of human development gone askew.

Gabor Mate’s connections – between the intensely personal and the global, the spiritual and the medical, the psychological and the political – are bold, wise and deeply moral. He is a healer to be cherished and this exciting book arrives at just the right time.

The War on Drugs

The world’s richest and most influential country, where addiction rates are already the highest despite—and in large part because of—draconian policies, threatens to move toward more ostracism, more violent repression. In March 2018, the president of the United States publicly approved of death sentences for drug dealers, “Some countries have a very, very tough penalty—the ultimate penalty,” Donald Trump said. “And, by the way, they have much less of a drug problem that we do.” As USA Today reported,

Last May, Trump congratulated Filipino President Rodrigo Duerte for a ‘great job’ in his crackdown on drugs. Duerte has boasted about personally shooting and killing at least three crime suspects. Human rights groups and the United Nations have condemned Duerte’s vigilante-style campaign that has left thousands of suspected drug dealers and users dead.

What crime inevitably does follow is not drug use as such, but criminalisation, as the writer Johann Hari brilliantly shows in Chasing the Scream: The First and Last Days of the War on Drugs. In the words of the Colombian journalist Alonso Salazar the American-led war has “created criminality and destruction of life and nature that is beyond any precedent.”

In this book I argue that there is no “war on drugs.” One cannot make war on inanimate objects, only on human beings. And the people the war is mostly waged upon are those who have been the most neglected and oppressed in childhood, for, according to all the science, all the epidemiological data, all the experience, they are the most likely to succumb to substance addiction later in life. In our civilised times we are punishing and tormenting people for having suffered trauma. 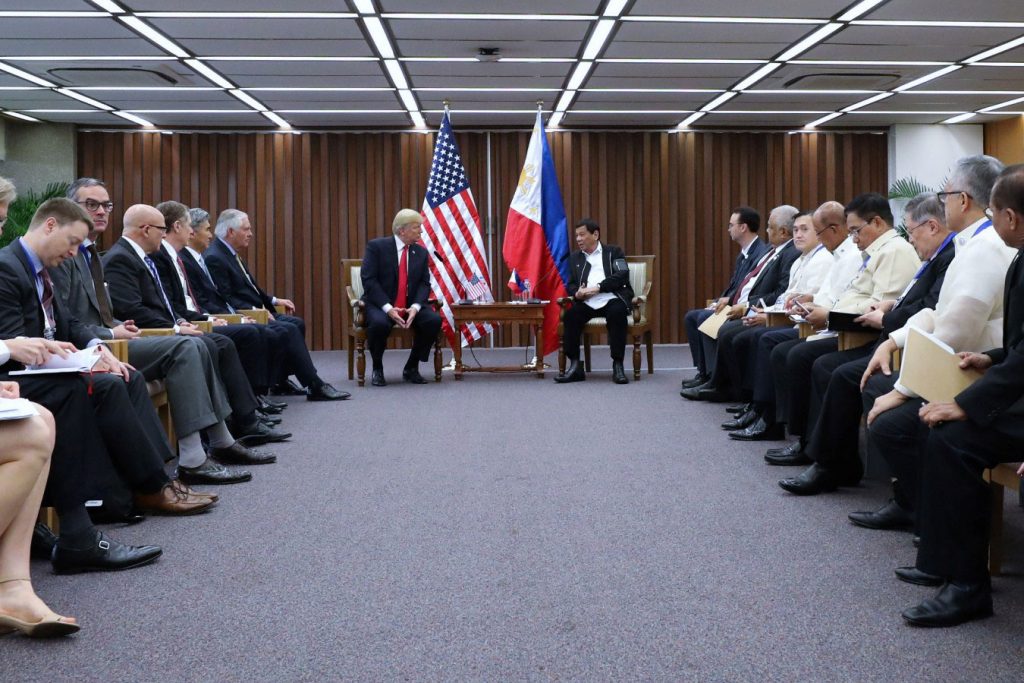 President Rodrigo Roa Duterte and US President Donald Trump discuss matters during a bilateral meeting at the Philippine International Convention Center in Pasay City on November 13, 2017.

The Realm of Hungry Ghosts

The Mandala, the Buddhist Wheel of Life, revolves through six realms. Each realm is populated by characters representing aspects of human existence—our various ways of being. In the Beast Realm we are driven by basic survival instincts and appetites such as physical hunger and sexuality, what Freud called the Id. The denizens of the Hell Realm are trapped in states of unbearable rage and anxiety. In the God Realm we transcend our troubles and our egos through sensual, aesthetic or religious experience, but only temporarily and in ignorance of spiritual truth. Even this enviable state is tinged with loss and suffering.

The inhabitants of the Hungry Ghost Realm are depicted as creatures with scrawny necks, small mouths, emaciated limbs and large, bloated, empty bellies. This is the domain of addiction, where we constantly seek something outside ourselves to curb an insatiable yearning for relief or fulfilment. The aching emptiness is perpetual because the substances, objects or pursuits we hope will soothe it are not what we really need. We don’t know what we need, and so long as we stay in the hungry ghost mode, we’ll never know. We haunt our lives without being fully present.

Some people dwell much of their lives in one realm or another. Many of us move back and forth between them, perhaps through all of them in the course of a single day.

My medical work with drug addicts in Vancouver’s Downtown Eastside has given me a unique opportunity to know human beings who spend almost all their time as hungry ghosts. It’s their attempt, I believe, to escape the Hell Realm of overwhelming fear, rage and despair. The painful longing in their hearts reflects something of the emptiness that may also be experienced by people with apparently happier lives. Those whom we dismiss as “junkies” are not creatures from a different world, only men and women mired at the extreme end of a continuum on which, here or there, all of us might well locate ourselves. I can personally attest to that. “You slink around your life with a hungry look,” someone close once said to me. Facing the harmful compulsions of my patients, I have had to encounter my own.

No society can understand itself without looking at its shadow side. I believe there is one addiction process, whether it is manifested in the lethal substance dependencies of my Downtown Eastside patients; the frantic self-soothing of overeaters or shopaholics; the obsessions of gamblers, sexaholics and compulsive Internet users; or the socially acceptable and even admired behaviours of the workaholic. Drug addicts are often dismissed and discounted as unworthy of empathy and respect. In telling their stories my intent is twofold: to help their voices to be heard and to shed light on the origins and nature of their ill-fated struggle to overcome suffering through substance abuse. They have much in common with the society that ostracises them. If they seem to have chosen a path to nowhere, they still have much to teach the rest of us. In the dark mirror of their lives, we can trace outlines of our own. 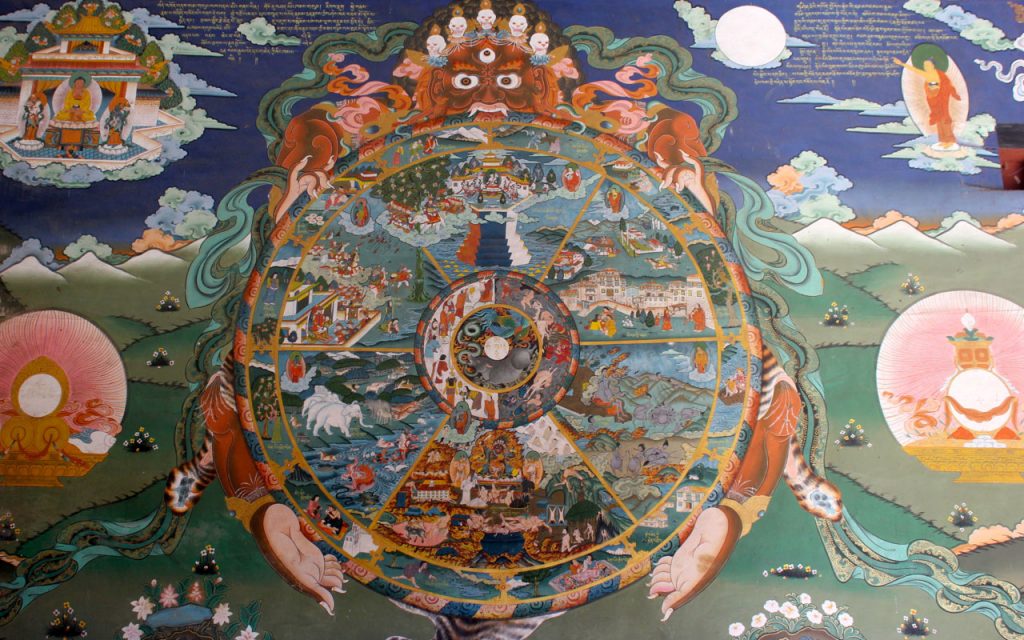 Bhavachakra from Bangalore, India. The Mandala (Wheel of Life) represents the Realms of Desire in the Buddhist Universe. The Realms of Desire includes the heavens, asuras, humans, beasts, hungry ghosts, and hell. The Wheel of Life is held by Yama, the Lord of Death. Yama is shown biting its teeth into the wheel, symbolising the Realms of Form that may be destroyed at any time. A buddha is located on the upper right corner of the Mandala, with his right index finger pointing upward, indicating that the practices of Buddhism can liberate sentient beings from the endless cycle of life and death. The Buddha taught that everything arises and exists in dependence on other things; enlightenment can only be attained by freeing oneself from all of the 12 karma formations: Craving, Feeling, Contact, Six Senses, Name & Form, Consciousness, Act of Volition, Ignorance, Old Age & Death, Rebirth, Becoming and Clinging.

Inevitably, addictions are most prevalent and most deadly among populations who, historically, have suffered the most trauma and dislocation. In early March 2018, I was invited to return to the Blood Tribe Reserve, a Blackfoot community near Lethbridge, Alberta, to speak at a conference on youth. In the words of their physician, Dr. Esther Tailfeathers, the community had experienced “a perfect storm” two weeks earlier, on February 23. Welfare payments meant there was money around. Drug dealers descended on the reserve—drug dealers in this case being largely young people themselves, hopelessly mired in poverty in a place where unemployment is at nearly 80 per cent and where the housing situation is so dire that sometimes three families—up to twenty people—share a house with one bathroom and six or seven people per bedroom. The dealers traffic to support their own drug habits. There was a blizzard in the evening, so the emergency personnel had trouble manoeuvring on the roads. That night brought nineteen overdoses and one stabbing death. Among those who overdosed, only two died; a tragedy the community could rightfully if unhappily consider a triumph. They had instituted harm reduction measures such as making Naloxone, an injection to reverse opiate overdoses, readily available to people.

The conference had been called because so many Blackfoot youth have been falling victim to addiction or exhibited other manifestations of trauma. Suicides, self-cutting, violence, anxiety and depression occur at a high rate in Canada’s First Nations communities, as they do on American Indian reservations and in Australian aboriginal communities. The ordinary citizen simply has no idea, cannot even begin to imagine, what misfortunes, tragedies and other kinds of adversary many Native young people experience by the time they reach adolescence—how many deaths of loved ones they witness, what abuse they endure, what despair they feel, what self-loathing plagues them, what barriers to a life of freedom and meaning they face.

In countries with a colonial legacy, the questions we must ask are straightforward. How do societies move to heal the multigenerational trauma that drives the misery of many Native communities? What can be done to undo the dynamics our past has dictated? Some may balk at such inquiry, fearing the discomfort that comes with guilt. In truth, this is not a matter of communal guilt, but of communal responsibility. It is not about the past. It is about the present. And it is about all of us: when some among us suffer, ultimately we all do.

“Your book humanizes the addict,” many readers have told me. That acknowledgement reflects a fundamental and common misperception. Addicts are human. What keeps many of us from seeing that? It is only the habit of our egocentric mind that divides the world into “us and them.” More precisely, it is our inability—or refusal—to see the us in “them” and the them in what we take to be “us.”

Such failure of imagination is seen is every realm, from personal relationships to international politics. Simply put, it reflects that clinging to identity which is our way of belonging to a group. And if we identify with a group of any dimension narrower than all humanity, there must then be others who, by definition, do not belong and to whom, we may believe at least unconsciously, we are superior. That superiority makes us feel entitled to judge, and to remain indifferent.

Preventing and healing trauma is a universal issue, not restricted to any one class or any particular ethnic or racial grouping. In fact, as I get to know more about Native ways I am often struck by the thought that we hurt ourselves when we dismiss cultures whose core teachings and values, if appreciated by modern society, could help heal our world.

There is a host of questions to be considered. Among them:

The narrative passages in this book are based on my experience as a medical doctor in Vancouver’s drug ghetto and on extensive interviews with my patients—more than I could cite. Many of them volunteered in the generous hope that their life histories might be of assistance to others who struggle with addiction problems or that they could help enlighten society regarding the experience of addiction. I also present information, reflections and insights distilled from many other sources, including my own addictive patterns. And finally, I provide a synthesis of what we can learn from the research literature on addiction and the development of the human brain and personality.

Although the closing chapters offer thoughts and suggestions concerning the healing of the addicted mind, this book is not a prescription. I can say only what I have learned as a person and describe what I have seen and understood as a physician. Not every story has a happy ending, as the reader will find out, but the discoveries of science, the teachings of the heart and the revelations of the soul all assure us that no human being is ever beyond redemption. The possibility of renewal exists so long as life exists. How to support that possibility in others and in ourselves is the ultimate question.

I dedicate this work to all my fellow hungry ghosts, be they inner-city street dwellers with HIV, inmates of prisons or their more fortunate counterparts with homes, families, jobs and successful careers. May we all find peace. 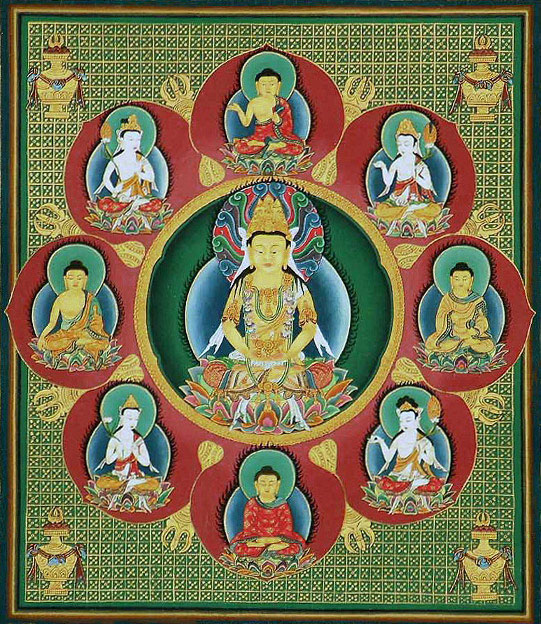 As above, so below; something came before…

2 thoughts on “In The Realm Of Hungry Ghosts”