Concerning the grand, megalithic structures of antiquity, we may wonder: would the units of measure there used have been in proportion to the size of the earth? Dr Nick Kollerstrom investigates. 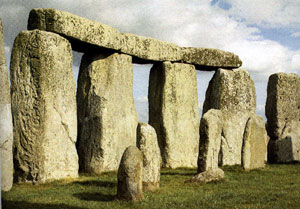 Mother Earth was clearly the source of the Greek stade, though the ancient Greek philosophers do not seem to have been aware of this fact. Specifically, ten Greek feet, times the fourth power of 60, equals the mean circumference of the Earth. Our most accurate source of the Greek 'Olympian' foot was the Acropolis – it was called the Hecatompedon, which meant 100 feet, and its length and breadth were in a 4:9 ratio, 100 Greek feet by 225. Precise measures of these two lengths were obtained by Francis Penrose, the architect and scholar of the history of architecture, in 1882; from which we obtain two closely-agreeing values of the Greek foot, and their average is 12.164 inches.

For comparison, using the 'geodetic' definition of the Greek foot as given above, from the most modern value of the Earth's mean circumference (and without going into just what is meant by 'mean', which is rather complicated) we derive the same value of 12.164 inches, as the length of 1/100th of an arcsecond of Great Circle. On the face if it, a tie-up is here working to five-figure accuracy.

The Greeks had a base-sixty unit of measure system, with 600 of their feet in a stade. How long was a stade? It was the length of the stadium at Athens – the basic concept of a racetrack. Their maths did not use base 60, so there is a hint here of their having inherited their metrology from an earlier source.

The Stade was the same length for both the Greeks and Romans, but they had different numbers of feet in it. All ancient authorities agree, that the Greek and Roman feet interlocked in a 24:25 ratio, i.e. the Romans had 625 feet in their stade. Let's notice that 600 is the product of 24 and 25, with ten Greek Stades being an arcminute of the mean Earth-circumference. Its beginning to look as if the fractional division of the earth first produced the Stade, and then this subdivided into the Greek and Roman feet.

Moving south to Alexandria, the circumference of the earth given by Eratosthenes, of 252,000 stades, is the product of 360 and 700, i.e. it looks as if someone has divided the one 'Earth-degree' measure by seven hundred (not six, as the Greeks had done). So, what's going on here? Much later on, Claudius Ptolemy's Geographica in the 2nd century AD is reckoned to be the first text to give latitudes and longitudes to all the places of Earth, and in doing so Ptolemy tells us that there are 500 stades in a great-circle degree, assuring his readers that this was 'a measurement that is proved by distances that are known and certain.' He leaves it (from a modern viewpoint) frustratingly vague as to whether his stade was defined by measuring along the ground, or by dividing up the globe. One is a length, the other an angular measure!

The hero of our tale is Edmé-Francois Jomard, a French mathematician and classical scholar, who was plodding out with Napoleon to invade Egypt, perhaps on a camel, in 1798, when it dawned upon him that the different measure-systems of antiquity had come about merely by dividing up 'le degree terrestre' into different numbers of stades. So the inherent definition of the stade was geodetic. The Earth was measured in antiquity. Jomard wrote this all up in 1817. Academics can never endure this simple truth, because it would shatter their conceptions of antiquity too completely; instead, they endlessly bicker about the length of the stade without getting anywhere.

The most precise measure of the Roman foot from ancient times, comes from … Stonehenge. The inner diameter of its ring of Sarsens is indeed, as Flinders Petrie noted, one hundred Roman feet in diameter. That ring held the measure of 100 Roman feet. Taking its estimated diameter as published by Petrie in the 19th century, and that published by Ronald Atkinson in the 20th,[1] and averaging them (for they are very close) they give us a Roman foot of 11.68 inches. Applying the 24:25 ratio to this, gives a 'Greek foot' of 12.165 inches.

The British archaeologist Flinders Petrie amassed evidence for the various lengths used in antiquity, and his careful and thorough study Inductive Metrology: the Recovery of Ancient Measures from the Monuments (1877) is especially valuable because he did not espouse a geodetic hypothesis, i.e. his data cannot be suspected of being biased in order to fit an Earth-measure hypothesis. Let's have a quote from him about Stonehenge and the 'Roman' foot: the measure encoded into the inner Sarsen circle had been

'closely accordant with the Roman foot, which, though 11.64" in Rome, had a mean value of 11.68" ±0.01 in Greece, Africa & England. Not that this shows Stonehenge to be post-Roman, as the unit was the great Etrurian and Cyclopaen unit, originally derived from Egypt, and it may have been introduced at any date into Britain.'

It is this value of 11.68 inches, which Petrie concluded was the most widespread mean value for the Roman foot, that does as we have seen interlink so precisely with the geodetic hypothesis. (For comparison, in 1639 the Oxford maths professor John Greaves measured a Roman foot stele in Rome, estimating it as 11.66 inches)

People talk about the 'Megalithic Yard' in this context, and Euan Mackie has conjectured that the inner circumference of the sarsen ring was meant to be 45 Megalithic Rods (=2.5 Megalithic Yards)[2], as would give a MY value of 2.717 feet, but what does one compare this with? There aren't a lot of other very credible MY yardsticks to compare, it seems to me. Everyone says 'Thom found' the MY to be 2.72 feet, but that turns out not to be very easy to evaluate. I prefer the better-documented Greek and Roman measures. Note well, incidentally, that the marvellous Sarsen ring was constructed 46 centuries ago, three centuries before the (inferior-technology) inner horseshoe of trilithons was put inside it.

One would like to see an international symposium to check out Jomard's hypothesis, organised by Graham Hancock (excuse me! I can't think who else would do it). It might find some decisive evidence for a world-girdling maritime civilisation now sunk into deep oblivion, which may have left behind its geodetically-defined units. The Sumerians were using base-60 arithmetic in the 3rd millenium BC, however as a science historian I have to say that we don't have evidence on record of anyone dividing a circle into 360 degrees until the 4th or 3rd century BC, with minutes and seconds some centuries later. The hypothesis does imply that geo-metry ('Earth-measure') did somehow accomplish this earlier than the historical record indicates.

The width of the Acropolis measured an arcsecond of a Great Circle, and only in recent decades have sufficiently precise estimates been reached, to appreciate that the tie-up does have five-figure precision. In the 5th century BC when it was built, someone must have known of these matters. For comparison, the French at the end of the 18th century tried and failed to define their metre geodetically (They wanted to have 40000 km in a polar Great Circle, but this turned out to be 40008 km, which was no good), and Jomard formulated his hypothesis in the aftermath of that failure.

For refs and calculations, see
www.dioi.org/kn/stade.pdf

published in the International Journal of Metrology