The Forum and Message Boards at Grahamhancock.com welcomes as February 2010 Author of the Month, educator, researcher and author David Johnson. David's decade of research in Peru and the coastal region of South America have gone a long way to solving the long standing mystery of the Nasca Lines. Welcome David and we look forward to an interesting discussion of your fascinating findings. A full bio of David can be found at the end of his article.

In August of 1995, when I first arrived in Nasca, Peru, I never imagined it would be a life changing experience that would take me on an odyssey for the next eleven years, and continue to lure me back to Peru for the rest of my life. What is most intriguing is how fast things transpired from the time I entered Nasca as a tourist, to the first discoveries and then the transition into a major project involving the academic community. What began as a project to help Nasca find additional water sources quickly evolved into a new interpretation of the geology and hydrology of the Andean watershed, and the discovery of groundwater sources beneath the Atacama Desert, which were unknown to its modern inhabitants.

These discoveries were quickly followed by the revelation that the Nasca Lines were associated with them, and, as incredible as it sounds, the ancient inhabitants had documented these features. Once the correlation was made, the Nasca Lines were a hieroglyphics waiting to be read. Once the interpretation of various geometric shapes became clear, I was even more surprised to find that the Nasca Lines were only a part of a much greater text, the coastal geoglyphs of Peru and Chile. During the course of my investigation, coastal geoglyphs at various sites along 1,200 mi / 1,931 km of Peru and Chile's coastal desert were surveyed, and the results were the same. The geoglyphs mapped the groundwater resources of the desert. This interpretation of the coastal geoglyphs is the only one that is currently being implemented today, as it was in the past, to assist residents of the driest desert of the world, find the most important component needed to support life in this parched environment, water. 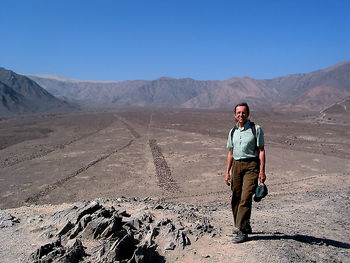 Nasca is located in the Rio Grande de Nasca drainage along the southern coast of Peru. In 1996 I began my research by surveying the communities known water sources. I was surprised to learn that ancient aqueducts (infiltration galleries) known locally as puquios, provided the community with one of the most reliable water sources. Therefore I began my study of the Nasca Valley by examining the ancient puquios. Historically the puquios have provided a reliable source of fresh water, even in the driest years when many wells failed. Previous studies, such as Schreiber and Lancho (1995), concluded the puquios received water from the rivers. Observing the location of the puquios along the upper Nasca Valley I wondered why most of them paralleled the east-west flow of the river rather than cross it. Considering the scarcity of water in this region one might theorize they were constructed to capture the highest rates of flow. Thus, if this theory were correct, the aqueducts should be perpendicular to the river's subterranean flow and not parallel like most of them. I began to wonder if an alternative water source was an option. It was this thought that lead me to the aquifers intersecting the valleys from the sides and eventually several were identified.

Where aquifers flowed and surface soils were not disturbed by alluvial flooding, agriculture or construction, there were geoglyphs. Geoglyphs consist of giant stone drawings that literally stretch for miles on the surface of the ground from the Andean foothills, across the pampa (desert) to the coast. This collection of geometric shapes and figures are known as the "Nasca Lines". As I identified the source and width of the aquifers I realized various geoglyphs corresponded to my calculations. If this is true, the ancients had identified and marked where the aquifers emerge from the mountains and cross the pampa. I compared specific data from aquifers, faults, archaeological sites and various geoglyphs and realized they consistently correlated with one another. Eventually I was able to associate various geoglyph shapes with aquifers and geological features. For example, a geoglyph system consisting of a variety of geoglyphs was associated with each fault and aquifer. Trapezoids were located directly above an aquifer marking its width. A zig zag pattern located along the boundary of a geoglyph system indicated there was no water beyond at that point. Triangles pointed to the water source and where the aquifer intersected the valley while spirals indicated where an aquifer's course changed directions.

Additional studies of the Rio Grande de Nasca drainage came to the same conclusion: the Nasca Lines consistently map the source and course of aquifers. Five components were consistently present at each location, as if part of an equation: faults, aquifers, fresh water sources, geoglyphs and archaeological sites. Where one or more of these features are found there is a high probability the others are present. I realized the Nasca Lines are a text imprinted into the landscape providing the inhabitants of the region, both past and present, with the solution to their water problems. Unfortunately, daily, unprotected geoglyphs are being damaged by agriculture and construction. If this continues one of the greatest manuscripts of the ancient world will be erased forever.

For several decades people have theorized that some of the Lines of Nasca are associated with water resources. Aveni and others have suggested various geoglyphs "parallel the direction of surface water flow" (Aveni, 1990) or point to the mountain Cerro Blanco, which local legends claim is the source of water in the valley (Reinhard, 1985). These observations only considered surface water erosion patterns and not subterranean flows. My observations were the first to consider aquifers as an alternative to surface water.

Previous studies have concluded only a small percentage of sites in this region are associated with geoglyphs. Helaine Silverman's "Beyond the Pampa: the Geoglyphs in the Valleys of Nasca", National Geographic Research 6(4):435-456(1990), states "Of the 69 geoglyph sites identified on survey, 56 constitute discrete geoglyph sites that are isolated from or not directly related to other archaeological sites (habitation areas, cemeteries, etc.) even when these are nearby."

Frequently geoglyphs were located just beyond the perimeter of the archaeological site. Usually a cemetery or habitation site existed on the first terrace and geoglyphs on the second terrace or extending up the slope to the ridge. Often geoglyphs were not visible from archaeological sites and only became apparent once the second terrace was examined. It appears in most cases the geoglyphs were intentionally placed off site to prevent damage from burial excavations and construction. Geoglyphs were found within a few hundred meters of a site and along the course of an aquifer which intersects the site. This pattern has been consistent throughout the Rio Grande de Nasca drainage. The geoglyphs were used to map aquifers from the mountains and across the coastal desert to where they intersect the valleys. The ancients realized in the mountains and on the pampa the aquifers were too deep for wells and puquios, however in several locations where they intersect a valley bottom one can dig deep enough to reach them. Thus wherever a fault, aquifer and geoglyphs intersect a river valley one can expect to find an archeological habitation site, cemetery, fresh water and agricultural zone.

The scientific study lasted five years and examined sites throughout the Rio Grande de Nasca drainage. The data indicated puquios were strategically located to intercept aquifers intersecting the river valleys. This is further substantiated by the location of archaeological sites, habitation and/or cemetery, at each of these locations. Faults were mapped, water sources were analyzed and the data compared to determine if there was more than one water source. Archaeological sites and geoglyphs were mapped and ground surveyed to determine if there was a correlation between them. The results supported my original observations.

As I expanded my investigation along the coasts of Peru and Chile, I realized the Nasca Lines were far from unique. Along Peru's central coast in the Supe Valley, I found numerous geoglyphs near Caral and others further north in the Casma Valley. I have documented geoglyphs in the Rimac and Ica Valleys in Peru as well as the Lluta, Azapa and Camarones Valleys of northern Chile. These sites cover a distance of approximately 1,200 mi / 1,931 km along the Pacific Coast. During these investigations I realized the concept of using geoglyphs and biomorphs may not have originated in Rio Grande de Nasca drainage since very similar patterns are also associated with other sites such as Caral, which is much older. It appears geoglyphs were constructed in a number of coastal regions by different cultures either during the same or different historical periods. The influence of the Nasca Culture extended from the Cañete Valley to the Chala Valleys in southern Peru, a distance of 230 mi / 370 km, with its heartland in the Ica and Rio Grande de Nasca drainages (Silverman and Proulx, 2002). This is a relatively short distance within the coastal desert. Another intriguing aspect is, throughout these coastal regions the function of the various geoglyph shapes remained the same. Until now only those found in the Rio Grande de Nasca drainage have been investigated extensively. Therefore my geoglyph interpretation is based on several sites located along the coasts of Peru and Chile. This data poses an intriguing question, did the concept of constructing geoglyphs originate in the Rio Grande de Nasca and Ica drainages or was it imported into this region? At this point in time I am not sure what the answer is.

One of the greatest challenges was to present our data in a way that would appeal to both the general public as well as the academic community. Therefore I include my initial discoveries in the first chapter and my interpretation of the geoglyphs in the second chapter. This provides anyone interested in the mysterious Nasca Lines with the basic discoveries that lead to their interpretation. Then one can continue on as far as they wish, by regions, along the coast of Peru and northern Chile. The text is also interactive with Google Earth. While reading the text you can observe the various features discussed simultaneously in Google Earth imagery. This way anyone, regardless of their degree of curiosity about this subject, will find something of interest.

Silverman, Helaine and Proulx, Donald A. 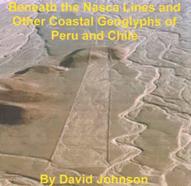 The book Cover and link to sale page.

(Scroll down to the bottom the page to find the purchase button.)