The Big Dipper (Saptarishi Mandala) has been intricately tied to Indian culture for millennia. This article attempts to show how it has been seen by Indians, who hold it in deep veneration. This would be in terms of star tales, a calendar, and even what eventually evolved into the Svastika symbol.

Needless to say, the Big Dipper has played a pivotal role in shaping different cultures across different geographic boundaries, over many millennia. It is the subject of star lore.

The Big Dipper– From Riksha To Rishis

The Rigveda is the oldest known scripture in the vast corpus of ancient Hindu texts. Linguists date it from 1500 BCE to 1000 BCE, although the multiple references to the Sarasvati River within the Rigveda and even scientific research on global aridity put its probable date closer to 2000 BCE or even older (2).

There is a reference to the constellation Ursa Major (Great Bear or Riksha in Sanskrit) as per the following hymn from the Rigveda as translated by Jamison and Brereton (3);

Yonder Bears [=stars of Ursa Major], set on high, are visible at night;

they have gone somewhere else by day.

The commandments of Varuṇa cannot be cheated: the moon goes at

While not explicitly stated, it is also understood that the stars of the Big Dipper are also referred to in the above hymn, given that they are also a part of Ursa Major.

From an astronomical perspective, the Big Dipper rotates in an anticlockwise direction about the pole star, together with the Little Dipper (Ursa Minor), which is also called the Little Bear (see Fig 1). 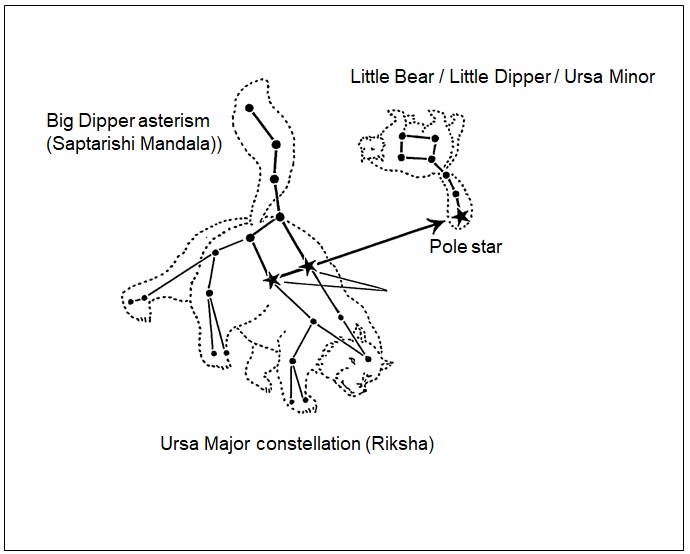 Fig 1: The Great Bear, the Big Dipper, the Pole Star, and the Little Bear (CC0)

The famous Saptarishis (Seven Sages) are not explicitly referred to as a group in the Rigveda. That said, the majority of those named as Saptarishis in later Hindu scriptures do appear as individual sages (rishis) throughout the Rigveda.

The first explicit reference to the Seven Stars of the Big Dipper as the Seven Sages (Saptarishi) occurs in the Jaiminiya Brahmana (4). They are later attested to in the Brihadaranyaka Upanisad (5) from which the earliest extant dates to around 700 BCE, with further additions to the text in later centuries. A few later Hindu texts also give the list of Saptarishis (6), although there is some inconsistency as to the identities of the Saptarishis in the various texts as shown in Table 1 below. 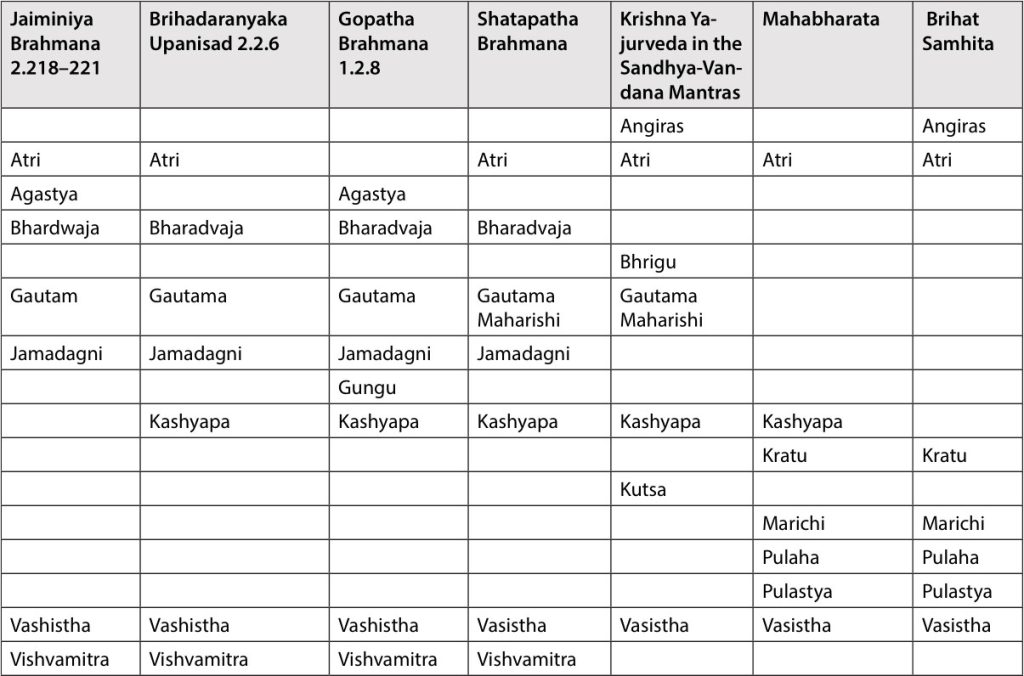 Table 1: Inconsistency of the identities of the Saptarishis (Seven Sages) in different ancient texts

The great astrologer, Varahamihira (c. 505 CE – c. 587 CE), gave another set of Saptarishis in his magnum opus, the Brihat Samhita. One critical difference with earlier texts, is that he gave the relative positions of the Saptarishis against the backdrop of Ursa Major. Iyer (7) translated the relevant passage from the Brihat Samhita as follows;

Rishis take a period of 100 years to go over each of 27 Asterisms. They rise in North East and are accompanied by the chaste Arundhati, the consort of Vasishtha. Eastern-most of the group is Bhagavan Marichi; next to him is Vasishtha; next is Angirasa and next two are Atri and Pulastya. Next in order are Rishis Pulaha and Kratu. The chaste Arundhati closely attends her husband, sage Vasishtha.

This description has enabled scholars to determine which of the Saptarishis refers to which star in Ursa Major (8), as shown in Table 2 below:

Table 2: Correspondence of the Saptarishis (Seven Sages) with modern stars

While above is known from Varahamihira, it need not necessarily be the earliest stellar associations from Vedic times.

Tales Of The Big Dipper

An enduring tale in the Mahabharata (9) involves the Seven Sages (Saptarishis) and their six wives, collectively called the Krittika. They were all happily married and lived in the northern sky together. Agni, the god of fire, emerged from the embers of a sacred fire ceremony called a yajna, which was performed by the Seven Sages. Agni was immediately smitten by the sight of the six Krttika sisters.

Agni wandered into the Chitraratha forest, attempting to ignore his lust for the Krittika sisters. It was in this forest that Agni met Svaha. Agni at first ignored Svaha. However, Svaha transmuted herself into six of the seven Krttika sisters in order to conquer Agni’s love. Svaha was unable to transmute herself into the seventh sister, because the seventh, Arundhati, was so devoted to her husband, the Sage Vasishta, that it was impossible to copy her.

The astronomical identity of these stars are as follows.

The Krittika is the star cluster Pleiades (Messier 45) which resides within the constellation Taurus. It does resemble a tiny Dipper. The Krittika is also a lunar mansion (nakshatra).

An early trace of this Mahabaratha tale can be found in the Rigveda which refers to the Kriitika sisters not as six, but as seven mothers (Saptamatrikas). This can be seen in the translation of the Rigveda by Jamison and Brereton (10) below.

The seven sisters, as mothers, (go) to the newborn child of worthy birth,

who is attentive to poetic inspiration.

the heavenly Gandharva of the waters, whose gaze is on men — to

Soma, for the regulation of all creation.

Here Is the same verse translated by Ralph T. Griffith (11)

The Sisters Seven, the Mothers, stand around the Babe, the noble, new-born Infant, skilled in holy

song, Gandharva of the floods, divine, beholding men, Soma, that he may reign as King of all the world.

The Krittika (Pleiades) are the equivalent of the Seven Sisters in Greek mythology. They are the stars Asterope, Merope, Electra, Maia, Taygeta, Celaeno, and Alcyone. Atlas is their father, while Pleione is their mother.

As mentioned, the Rigveda refers to Krittika as the Seven Sisters. However, the Mahabharata refers to them as six Krittika sisters. The apparent discrepancy has to do with eyesight and viewing conditions. It should also be noted that some stars are not as bright as others. This is referred to as the stellar visual magnitude, or simply stellar magnitude. 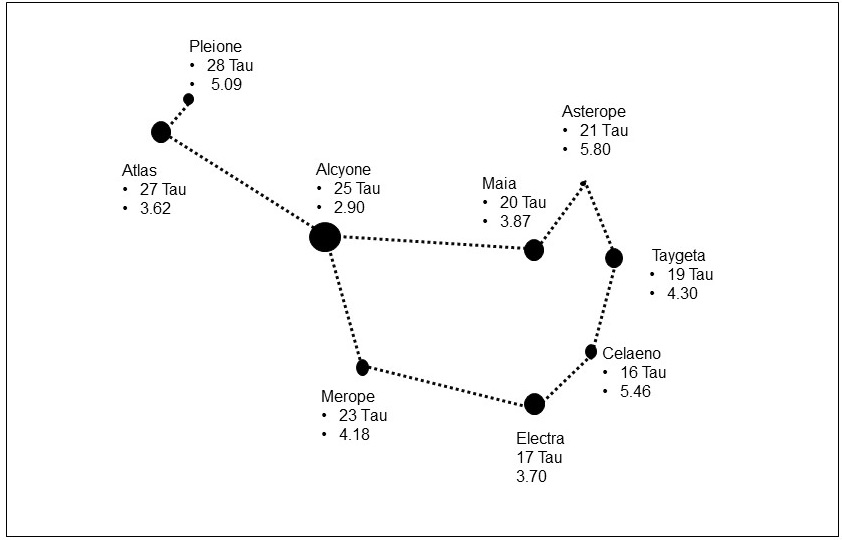 Fig 2: The stars of the Pleiades and their associated stellar visual magnitudes.

Fig 2 shows the stellar magnitude the stars of the Pleiades. The lower the number, the more brilliant the star. Conversely, the higher the number, the duller the star. Asterope (Tau 21) has a stellar magnitude of 5.80. It is the faintest star in the Pleiades, which may or may not be visible to the naked eye, depending on viewing conditions. This may account for why the Mahabharata only mentions Six Sisters instead of Seven Sisters.

Some sources claim that Svaha is the star Zeta Tauri. However, these sources are non-authoritative, Besides, Zeta Tauri is not a part of the Pleiades system. It is the authors view that Svaha is more likely the star Pleione, which is in the Pleiades. The relative proximity could explain how Svaha could disguise herself to be the six Kritiika.

Arundhati is mentioned in the Mahabharata as being the Seventh Sister. Having said that, Arundhati is not a part of the Pleiades, and therefore cannot be a true Krittika sister. Arundhati is in reality the star Alcor (80 Ursae Majoris), which is in the constellation Ursa Major.

Alcor (80 Uma) has as its companion, the star Mizar (ζ Uma), The pair are binary stars. These stars orbit each other as such. It is for this reason that Arundhati (Alcor) and Vasistha (Mizar) are seen as an ideal couple, and thus feature prominently in Hindu marriages. Hindu priests point this star out to newly married couples for inspiration as such.

It is the authors’ view that the earlier mentioned Mahabharata tale of the Saptarishis leaving their six Krittika wives may be linked to a very ancient calendar, called the Saptarishi (Saptarsi) calendar. In this case, the pointers from the Big Dipper may be pointing away from Kritikka nakshatra.

Indrasena (8) highlights that the Saptarishi calendar is referred to in texts like the Brihat Samhita (XIII, 3-4), the Vishnu Purana (IV, 24.105-1062), the Matsya Purana (273, 42-44), the Vayu Purana (99,421-423) and the Bhagavad Purana (XII, 2.27-32). Indrasena also mentions that Varahamihira makes reference to an even earlier work on this calendar by Garga. Finally, Indrasena quotes the following passage from Vishnu Purana;

“Take those stars of Saptarishi (seven sages) which are seen first after the rise. The nakshatra, which is seen in the middle of it at equal distance at night, is said to be the residence of Saptarishi for 100 years of man’s life. Oh great brahmin, they were in Magha (Regulus, Leo) at the time of Parikshit.” Vishnu Purana IV.105-106

The above passage effectively means that the pointers of the Big Dipper (Saptarishi Mandala) remain in each nakshatra for 100 years, thereby creating a cycle of 2,700 years.

Modern astronomers, using modern computer simulations, are of the view that the claim of the Saptarishi pointers being in each nakshatra for 100 years is erroneous. Sule et al (12), noted that the different nakshatras are astronomically different sizes, with Pushya (γ, δ and θ Cancri) being one of the smaller ones. They further noticed that the Saptarishi spanned Pushya (γ, δ and θ Cancri) only once in roughly 100 years. That would have occurred around 2200 BCE to 2100 BCE at the time of the Indus Valley civilization. The once-in-a-lifetime Saptarishi shift was undoubtedly noticed by ancient observers. The following generations misinterpreted it, causing it to be generalised. Thus, the evolution of this observation into a calendar which continues on until today in Kashmir and Nepal.

In the preceding section, it was discussed that astronomers observed that the Saptarishi calendar occurred at the time of the Indus Valley civilization between 2200 BCE and 2100 BCE. However, there is evidence that the Big Dipper was observed much earlier, in the form of a svastika (swastika) symbol found on seals in Mehrgarh in present day Balochistan, Pakistan. Mehrgarh is a Neolithic archaeological site which dates from 7000BCE to about 2500 BCE/ 2000 BCE. It was absorbed into the later and much larger, Indus Valley civilization.

The svastikas origins are astronomical. It occurs when the Big Dipper orbits the pole star in an anti-clockwise direction. The Big Dipper sometimes appears upside down or even sideways, depending on the time of the year. The rotation of the Big Dipper (13) ultimately forms the distinctive shape of the svastika (see Fig 3). 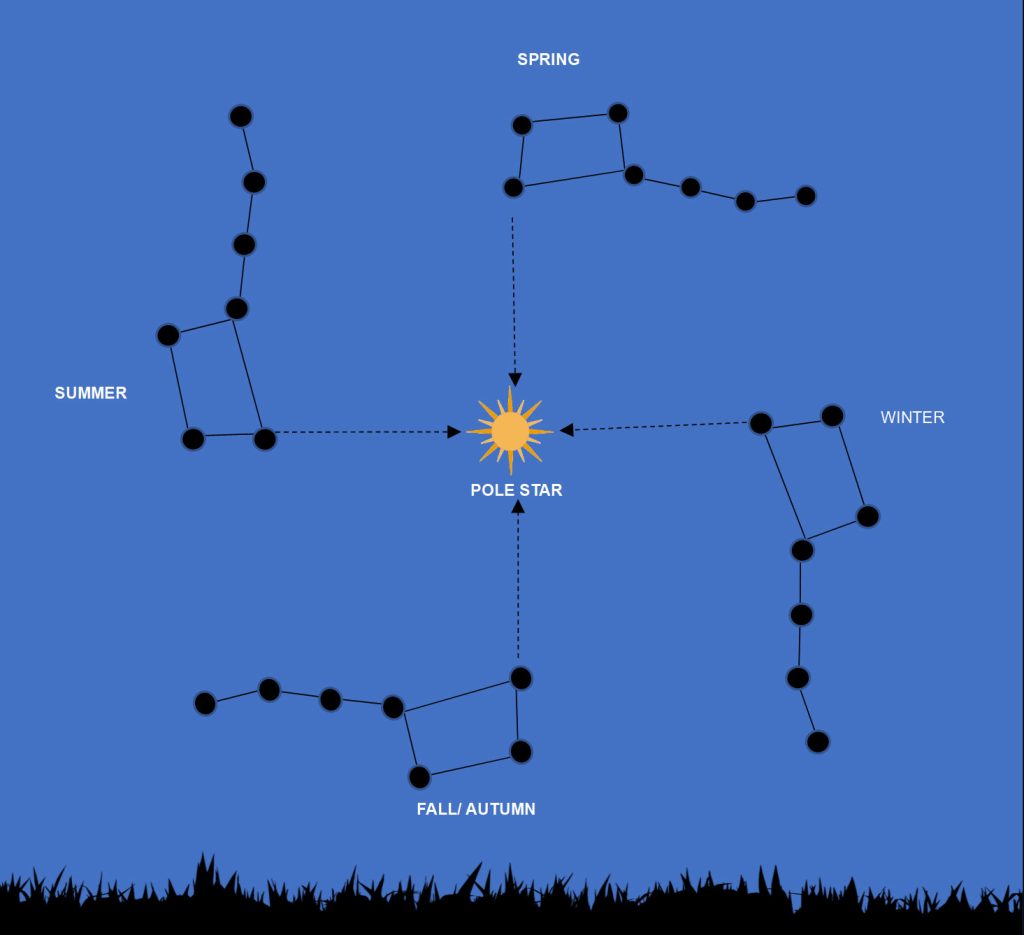 Fig 3: The Big Dipper moving about the pole star giving the svastika shape

The pole star varies due to the precession of the equinoxes. The current polestar is Polaris (α Ursae Minoris). However, Sivertsen states that the pole star was Thuban (α Draconis) from 3300 BCE to 2300 BCE (14).

The original svastikas in Mehrgarh and in the Indus Valley civilization did not depict four dots. This appeared later. It is the author’s view that the four dots represent the Little Dipper (Ursa Minor) as it moves in tandem with the Big Dipper (Ursa Major) about the pole star, as the author illustrated in Figure 4 below. 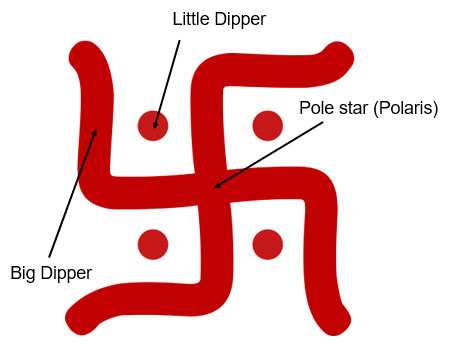 The term “svastika” may have its origin in the term “svasti”. In their translation of the Rigveda Jamison and Brereton (15) state that “The signature word of this hymn is svastí ‘well-being’”;

For it is just well-being that is best on the path forward—that, (already)

rich in inheritance, sets out toward something valuable.

Let it keep guard over us at home and in a foreign place; with the gods

as its herdsmen let it be easy of access.

The noblest Svasti with abundant riches, who comes to what is good by distant pathway, –

May she at home and far away preserve us, and dwell with us under the Gods’ protection

Today, as always, the svastika is a symbol of great reverence and auspiciousness to the Hindus, Jains, and Buddhists. The svastika symbol can be seen not only in temples, but in homes, conferring its blessing on everyone.

Courtesy of Astrological Perspectives, the official e-magazine of the Malaysian Astrological Society http://astrologymalaysia.org/

9 thoughts on “The Big Dipper In Ancient Indian Astronomy”