Fluctuations in the level of the Caspian Sea have greatly influenced coastal communities for millennia. This is due in part to a dynamic balance between regional climate, temperature, rainfall in the catchment areas of the rivers feeding the basin (principally the Volga), and evaporation from the surface of the sea. As an endorheic basin (i.e., having no outflow), and evaporation estimated to be around one metre per year, the Caspian Sea level will either rise or fall depending on climate and rainfall.  Currently the level is around minus 28 m relative to average sea level, (asl).  In the present era, fluctuations are only on the order of a few meters, and while significant to those living near the coastline, this is minor compared to the dramatic regressions and transgressions associated with the Ice Ages. (Mamedov., 1997)

In the last ice age it is acknowledged that global sea level fell below -100m asl as ice sheets develop on land and in polar waters.  Then with deglaciation, meltwater inundated the northern watershed areas to drain via river systems into the low lying basins of the Aral, Caspian, and Black Seas. During the transgression maximum water levels rose to around 50 m above mean sea level. This is the current understanding of Quaternary Eurasian water balance. (Baker.,2007), (Grosswald., 1998), (Mangerud et al., 2001 and 2004), (Rudoy., 1998). However, the author believes that rainfall and river inputs have largely been overlooked and that sea/lake levels in reality were much higher. (Gallagher, 2011).

The realization of massive flooding during the Ice Age came about as a result of natural history and archaeological forays into the Azerbaijan countryside to search for evidence of early man (i.e. rock shelters, stone circles, cart ruts, burial mounds, rock art etc). Flooding was hinted at due to settlement remains at the edge of old sea beds. More obviously, it became apparent that the Caspian Sea had to have been much higher due the presence of raised terraces and relatively unweathered strandlines in valleys and on mud volcanoes. With terraces in excess of 100m above mean sea level, and strandlines in sheltered valleys in excess of 200m asl, it seemed improbable these could be attributed to tectonic uplift. With no obvious explanation for the flooding, this encouraged a search for organic remains to determine the age of the flooding, and possibly identify a mechanism for its cause.

In explaining this, it is important to consider that as Arctic ice fronts advanced onto mainland Russia, the north-flowing rivers (Yenissei, Ob, Pechora, Dvina, and possibly Lena) which supply most of the freshwater to the Arctic Ocean became blocked by ice dams. In consequence rivers were incrementally diverted into the Ponto Caspian region during the Pleistocene and would have persisted for millennia to create a huge lake. This may also be the reason why stepped terraces are be found in Azerbaijan with terrace tops correlating to spillway heights. (Gallagher, 2011). Of further importance and for topographic reasons, the deluged landscape was not able to drain floodwater as the Dardanelles and Bosporus channels were then closed. This is evidenced by a single borehole study in the Aegean Sea dating from 16,000 years BP, which showed no outflow from the Black Sea/lake up until 10,000 BP. (Aksu. et al, 2002).

In consequence, large ice-dammed lakes formed between the ice sheet in the north and the continental water divides to the south. These lakes overflowed toward the south, and thus the drainage of much of the Eurasian continent was reversed. The result was a major change in the water balance on the continent, with decreased freshwater supply to the Arctic Ocean, and increased freshwater flow to the Aral, Caspian, Black, and Baltic seas.  In effect a massive endorheic body of water had to have formed within the continental interior.

Proving this to the author’s satisfaction involved finding and dating organic remains. With perseverance it was possible to collect molluscs at elevated locations in the region of the Gobustan archaeological reserve in Azerbaijan: (a remarkable site depicting over 6000 petroglyphs several of which were of multi oared rowing boats). Bulk shell samples were sent to Beta Analytic in Florida for radiocarbon dating. Initial results confirmed water levels in excess of 80m to 126 m asl with dates around the end of the LGM. While inaccuracies in dating might be anticipated due to fossil washout, and jumbled seabed shells accumulating over a longer timescale, sufficient information was obtained to suggest the possibility of an Ice Age deluge.

To test this theory further it was important to determine the spatial extent of the inland water body. Logically such a massive body of water should be detected around the Black Sea coastline. Using Google Earth the terraces and cliffs of the Thracian coastline in Bulgaria were identified as a possible location to find mollusk remains, which proved to be the case. Samples were collected and analyzed from sites ranging from 33 to 126m above the Black Sea. Two samples, at 77m and 126m asl provided radiocarbon dates of 39200 +/- 490 BP and 29010 +/- 170 BP respectively, with other results in excess of 43ka, i.e. towards the limit of radiocarbon dating method. The former results supported the Late Pleistocene dating from Azerbaijan and provided evidence for widespread flooding. Selected results include the following:

With this limited data set it is not possible to determine the actual water level fluctuation timeline as many more data points are needed. However, assuming that there are no errors in radiocarbon analyses and tectonic uplift is not a significant factor, it may be inferred that Eurasia was indeed deluged for much of the late Pleistocene. The release of meltwater upon deglaciation would of course later raise floodwater level much higher, possibly beyond the 200m asl mark, – as indicated by Azerbaijan’s strandlines, such that discharge would be to the North Sea and English Channel. Meltwater erosion may even have played a part in carving open the Bosporus and Dardanelles waterways.

With levels in excess of 100m asl, Eurasian geography would obviously be greatly affected and this would have significant implications on regional climate, biogeography and human demographics. From an archaeological perspective it may even be inferred that intercontinental navigation was possible for millennia during mankind’s prehistory. The flooded landscape and the eventual disappearance of the waterways during the Holocene would also surely have influenced mankind and prehistory at the start of the earliest civilizations. Interestingly, in other research, Upper Paleolithic settlement sites are to be found only on higher ground, above the floodwaters.

In considering the physical impact of a massive body of water, it is likely that there is sedimentary evidence to be found. Deltas and alluvial fans would be displaced upriver and fine silt widely dispersed throughout the sea/lake, enhanced by Spring floodwaters.

In exploring this idea to work out the scale of the water body a reasonable assumption was to use the dominant 60 km long raised terrace in Azerbaijan as a benchmark for extrapolation and delineating the contours of the inland sea/lake. With an upper elevation of around 125m asl, using Google Earth, a map of the sea/lake was obtained. Then in comparing this to the loess map of Europe (Fink et al), a close correlation was found. This then raised the question of the origins of loess. Could it be that loess is the result of sedimentation and that it has alluvial and not aeolian origin? 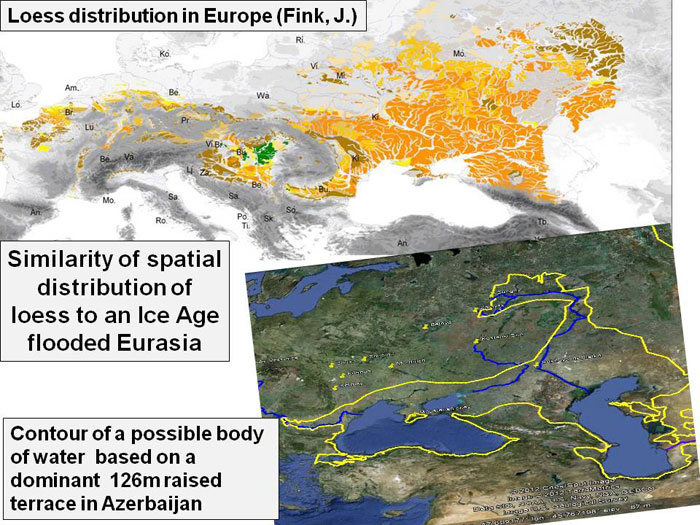 Current understanding is that loess is an aeolian or windblown deposit which originated during drier ice age conditions. Given that the radiocarbon dating evidence suggests low lying areas were under water for much of this time, then (if true) this challenges loess’s aeolian origins. And given the likelihood that major rivers contributed fine silts, it further suggests loess may originally be an alluvial deposit. Subsequent water drawdown would expose the fine dusty unconsolidated sediments to erosion by wind, streams and rivers. Vegetation would then colonize the margins as the water body shrank and develop paleosol, (soil).

While it may be noted that earlier scientists, including Charles Darwin once thought that loess had alluvial origins, evidence for this was missing. With limited radiocarbon dating, strandline evidence and a probable flood mechanism suggesting an alluvial origin for loess, researchers may wish to investigate this possibility. To confirm the extent of the flooding, evidence of the height of the water body should be obtained by dating organic remains from elevated sites along the coastlines of e.g. Iran and Turkmenistan. A record of the rate of drawdown should also be found in organic remains at the interface of loess and paleosol.

If the lake level and drawdown rates were to be confirmed then this would perhaps help pave the way to multidisciplinary investigation of the many fascinating implications inherent in an ice age flooded continental interior.

Discuss this article on the official thread on the GrahamHancock.com messageboards