Within layers of hoaxes, hype, history, legend and myth, we subconsciously imprint one specific pattern in all cultural sites. The archetypal structuralist model reveals that blueprint among apparently haphazard resources, buildings and events in every village and city. Rennes le Chateau’s Visigothic, Merovingian and modern layers, and Rennes les Bains’ Roman and Frankish layers, each added some archetypal features to the structure of the place.

Ancient settlers of the Two Rural Rennes made salt near Mount Bucharach, washed in hot sources along the lower Sals river, and traded at the Occitan Aude river market that became Couiza. Romans built baths at Rennes les Bains, a road, and a stopover at L’Escale about BC 60. Couiza’s Visigoth monks built a castle and church on the inviting Rennes le Chateau citadel in their grazing fields about AD 414. Some Medieval political, military, religious and esoteric intrigues played out in the area. Rennes les Bains priest Henri Boudet made the first systematic description of the soul of the place. In ‘True Celtic language and the stone circle of Rennes les Bains’ (1886), Boudet fused place names, amateur ‘Druidic’ etymology and puns, and localised Pliny’s ‘Celtic’ calendar into his valley landscape as ‘twelve palaces, caskets or drawers locked in a wheel, grinding corn perfectly’. Calibrated in English miles, his vision had a 17 km circumference, implying a 5.5 km diameter cycle, but without month or zodiac labels.

Boudet’s Anglo-Frankish correspondence theory came closer to subconscious truth than any of the conspiracy theories imposed here by visionaries and novelists since the 1950s. Archaeo astronomer Alexander Thom noted “a pattern in the landscape” at Rennes, but did not identify it. Rennes le Chateau church domain owner Noel Corbu revived public interest in Templar gold by hyping priest Saunière’s treasure. Pierre Plantard, a draughtsman who had been inventing ‘societies’ since before WWII, constructed the Rennes pseudo-history. His Red Serpent pamphlet adapted alchemical emblematic verses about the ‘Red Sea’, and re-cycled Boudet’s book into a horse-ride among landscape ‘constellations’. His ride does not fit the landscape in any regular pattern, despite Brouillard’s 2009 attempt to demonstrate it as a series of chess moves. No consistent ‘zodiac map’ had emerged in this or any landscape, despite 70 years of ‘correspondence’ effort, including JJ Artficier on Staticblog4ever; Wayne Herschel on Hidden Archives; and again Plantard, or a retro-hoaxer using his name, on Zodiac of Rennes. Paul Smith (2018) placed Boudet’s ‘twelve caskets’ around Bains, and around the Rennes church floor. All these schemes differ entirely from one another, and from the current identification of archetypal features.

Popular science and popular culture assume that any recurrent behaviour is consciously invented or borrowed, learned and diffused. But the archetypal structuralist model offers hundreds of examples of individual and collective subconscious re-expressions of a specific pattern, and small sets of optional features, each appearing at a specific average frequency in cultural media worldwide; unaffected by theological, political, academic or esoteric agendas. Apparent ‘cultural’ diversity is little more then stylisation. But we are equally hard-wired to ignore this pattern in favour of our egotistical image as ‘creators’ of built sites, and even of media and of meaning itself.

In Rennes les Bains and Rennes le Chateau, the subconscious blueprint was demonstrated in the Rennes le Chateau church Sermon on the Mount mural of 3m diameter; church floor plan of 8m x18m; presbytery ground of 60x90m (Furter 2019); and two landscapes of 4km diameter each, as interlinked flattened ‘spheres’. These indicate that correspondences are due to hard-wired behaviour, not to imitation or conspiracy.

All artworks, built sites, alphabets and other cultural sets, express twelve or sixteen types (each with certain optional features); in peripheral sequence; with an axial grid between their eyes or focal points; around five polar markers on junctures or limb joints; one of which is oriented to the implied solstices of the cultural time-frame. The archetypal model uses a standard format to compare structuralist data. Here is the Rennes le Bains landscape version. 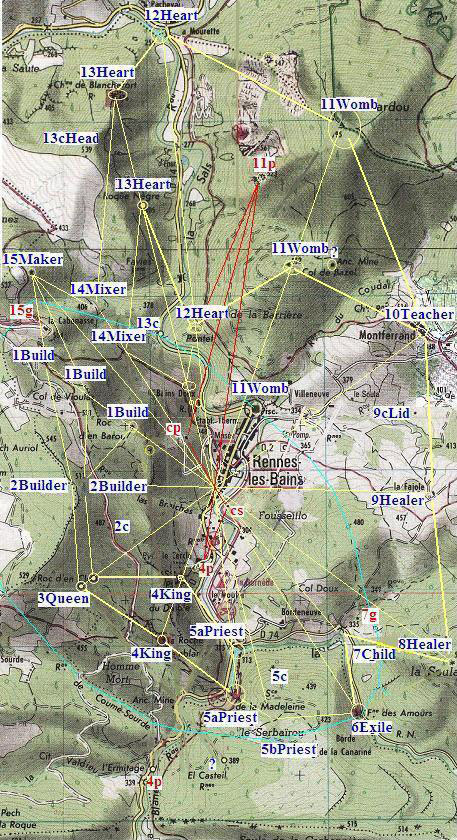 These polar markers place midsummer on axis 13 Leo or 13-14 Leo-Cancer, implying spring and the cultural time-frame in Age Taurus or Age Taurus-Aries. The transition was about BC 80, between Imperial Roman and Republican Christian Ages. The general theme in this landscape includes type 2c Basket of Mysteries, here in the Breiches knoll sector; and type 9c Lid, here in the Soul and Granary sector. The layers of structuralist features of cultural expression are subconscious.

Rennes les Bains type 6, the Lovers source (photo after Canalblog). Top right is a water mill remnant. Just below it is a small modern flat niche with engraved salamanders. 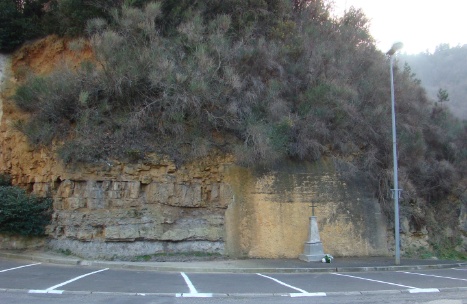 A ragged equator of sites makes the Rennes les Bains basin a concave, lower sphere of waters ‘under the earth’, next to the plateau around Rennes le Chateau knoll as an upper sphere. Their spheres are ‘geared’ to one another, since five Bains axes and five Rennes axes meet at five shared features, on these type axes: 14 Cassaignes village; 15 Mouscairol at Wolf Pass; 1 Brugos hairpin track; 2 Halo cliff Auriol; 2c La Maurine; 3 Ejaculation Source.

The Rural Rennes axial grids include several natural features, indicating an ‘Arcadia’. Nature has many media of structuralist expression, while culture has to borrow and collaborate. Both domains use replication with some variation, indicating a natural pattern. The archetypal model raises that pattern to conscious study, and resolves conspiracy theories. 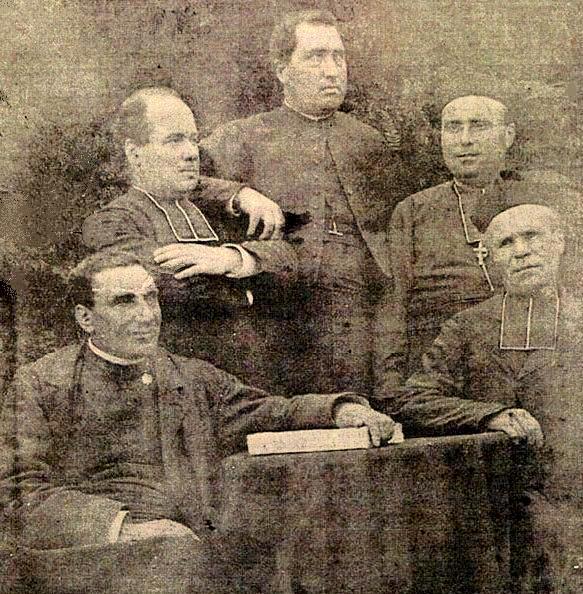 Rennes les Bains priest Henri Boudet (middle right), author of ‘True Celtic language’. On this Carcasonne Seminary reunion photo (scan after Terre de Rhedae) are Bérenger Saunière of Rennes le Chateau; Maurice Malot of Grèzes, Alfred Saunière of Narbonne where he worked for the Chefdebien family; Boudet; and Antoine Gelis of Caustaussa, who was murdered in his church in 1897.