Divine Order and the Great Pyramid

It is one of the most investigated and studied structures in the world, yet Egypt's Great Pyramid of Giza retains an almost impenetrable air of mystery about it to this day. There are no contemporary records of its construction and almost no mention of it in any subsequent record for thousands of years thereafter, until Herodotus wrote of it in his History in the 5th century B.C.E. Although it has long been commonly agreed that Egypt's 4th Dynasty Pharaoh Khufu built the Pyramid as a tomb for himself, these facts are not universally accepted, as great controversy surrounds both its age and purpose-controversy born of persistent legends that the Pyramid was built to memorialize certain knowledge and preserve it from the world-wide destruction wrought by the Great Flood.

John Greaves, a seventeenth century English astronomer and mathematician, who had traveled to Egypt to measure its ancient buildings, including the Pyramid, for the purpose of learning Egypt's ancient system of measures, which were reportedly based on the dimensions of the Earth, was the first European in modern times to systematically investigate it. He later published his findings, which excited great interest amongst scholars, including Sir Isaac Newton, who was searching for accurate measurements of the Earth for his theories regarding gravity. Greaves entered the Pyramid, but found it empty and learned that it had been empty for centuries, ever since the 8th century Abbasid Caliph Abdallah al-Mamun had tunneled his way into it. Al-Mamun was looking for the knowledge that the Pyramid reportedly held and particularly for knowledge of the Earth and its dimensions, but apparently he, too, found the Pyramid empty. If the Pyramid had held anything, whatever it was had been removed long before al-Mamun's time. Only the legends of its contents remained and these Greaves dutifully recorded during his visit, as did others who came after him.

The legends all told essentially much the same story: an ante-diluvian king foresaw in a dream that a huge celestial body would fall to the Earth, and would cause fire and flooding world-wide that would destroy much of the Earth. On awakening, the king consulted with his counselors, who faithfully took measurements of the heavens and proclaimed that the king's premonition was indeed true: the Earth would be destroyed. With the time remaining, the king set about building the pyramids, including the Great Pyramid, in order to preserve that portion of the accumulated knowledge of mankind deemed worth saving against the pending destruction, including the secrets of geometry and astronomy, star charts, and celestial spheres and terrestrial globes, as well as iron that wouldn't rust and malleable glass. The focus of this legendary knowledge on the heavens is readily apparent, as might be expected in view of the fact that it was the source of Earth's pending destruction. However, there is no record-even in the legends-that any of this material was ever found in any of the pyramids and so the legends have invariably been dismissed as little more than fanciful tales.

Curiously, archaeological excavations over the past century have revealed that a number of ship-shaped, stone-lined pits had been dug near the Great Pyramid. These excavations have also revealed the existence of two complete, but dismantled ships that had been buried in sealed chambers next to the Pyramid. One of the dismantled ships was subsequently removed and patiently reassembled, and then placed on exhibit in a specially designed building next to it, where today it is one of the most interesting attractions on the Giza plateau. The Pyramid's maritime connections are obvious. It is a connection that clearly harks back to a time long before modern astronomy became a highly specialized science, when only two groups of people watched the heavens regularly and studied the stars intently: mariners and priests-the heaven gazers. The priests had an interest in the heavens for time keeping and calendar tracking purposes, which were directly related to their observance and practice of prescribed religious rites and to their commemoration and celebration of the calendar's religious festivals. Mariners, on the other hand, watched the heavens to help them to navigate to distant lands, as well as to mark the passage of time. The two groups obviously must have been deeply dependent upon one another, with the knowledge and experience gained by the one systematically advancing that of the other, to the benefit of both. It was a symbiotic relationship that would endure for thousands of years.

But what does this have to do with the legends? Everything, because it leads to the door to the surprising truths behind some of the legends of the Great Pyramid, and the key that unlocks this door is to be found in the customary and most fundamental procedure of celestial observation, as practiced by both priests and mariners from time immemorial. This procedure, which precisely affixes the location of a given heavenly body in the celestial firmament, is performed by measuring its angle of altitude above the horizon and its angle of azimuth along the horizon east or west of true north or south. (See following graphic of celestial dome, with measures of altitude and azimuth enumerated.) This key reveals the celestial spheres of the legends, which were coded into the stones of the walls of the King's Chamber in the Great Pyramid. But why, you might ask, were the spheres coded in this manner? Because measures of altitude and azimuth are based on number and geometry, which give form to a universal language that transcends both time and circumstance and is known to all men-the language of mathematics. The architects of the Great Pyramid were speaking to the ages when they designed this chamber and the wealth of information that was so cleverly coded into it. 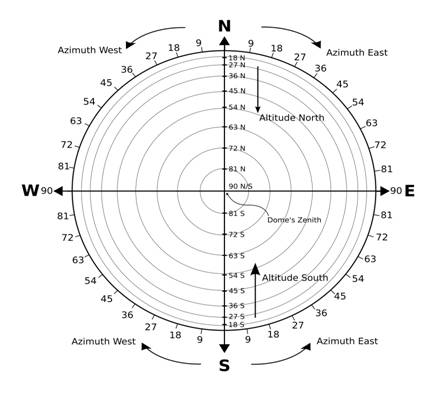 Celestial dome with measures of altitude and azimuth

The King's Chamber is rectangular in shape, with its longer axis running east-west and the shorter north-south. All of the stones in the walls, the ceiling and the floor are fashioned of precisely cut granite, most weighing many tons, but all cut and set with astonishing precision. The ceiling has nine stones that span the east-west axis of the chamber. The walls have exactly 100 stones, set in five even courses or rows from floor to ceiling. The north face of the chamber has 27 stones, the south 36, the east 18, and the west 19. A closer examination of these numbers reveals that each wall, with the exception of the west wall, is a multiple of the number 9, strongly suggesting that it was intended to be a factor in the Chamber's design. And even the number of blocks in the west wall could be considered to be a multiple of the number 9, if a unique stone set in the lowest course is omitted from the sum. This stone, located adjacent to the south wall, is fitted with a noticeably less-exacting standard than that of any of the others in the chamber, a feature that can only have been intended by the builders in order to draw attention to it for the purpose of omitting or including the stone in the count. 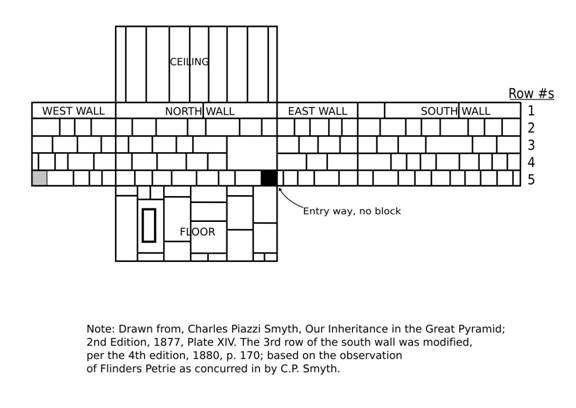 Arrangement of stones in the King's Chamber

The following table depicts the number of blocks in each course on each wall, according to the cardinal direction of the wall.

Number of blocks in each wall by row

The following table depicts the products of these numbers when multiplied by the factor of 9.

Angular or celestial coordinates in degrees

The numbers from Table 2, ranging from 9-90, with their associated cardinal direction, are spherical coordinates. Each number from the north or south wall defines an angular measure of altitude and when paired with either a number from the east or west wall, each of which defines an angular measure of azimuth, yields a coordinate pair (e.g. 45º N, 36º W, 27 º S, 18 º E, etc.) that defines a specific location on the underside of a dome or half of a celestial sphere. If we were to stand under the night sky and look up at the heavens, we would perceive that the stars all appeared to be located equally distant from us in their positions in the firmament, which would have the appearance of the underside of a great dome surrounding us on all sides, from horizon to horizon. This dome is the visible half of the celestial sphere that surrounds the Earth. The zenith, or highest point of the dome from our perspective, is the point on the dome that is directly above us. It is from this vantage point, directly below the zenith, that we should properly consider the Chamber's coordinate pairs with our imagination's eye. Each pair from each of the Chamber's five courses can be plotted on the underside of the celestial dome.

The numbers derived from each course each provides four coordinate pairs. When each of the coordinate pairs are located on the celestial sphere and their locations are then projected downwards onto a flat surface, as a priest or navigator would do to create a plot, and then connected together with one another, they depict symbols-circles, parallelograms, and triangles-the stuff of geometry! The 1st, 3rd, and 5th courses depict symmetrical symbols; the 2nd and 4th courses depict asymmetrical ones.

In considering the coordinates from the Chamber's 3rd course, their locations on the celestial sphere when projected downwards onto a flat surface, create the following plot: 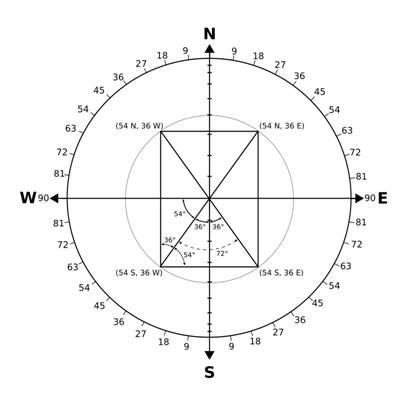 Each of the eight triangles created by the plot is a right triangle, with angles of: 54°-36°-90 º. This triangle was considered sacred to the ancient Egyptians and was called mr or mer. They believe that God used this triangle when he laid out the universe and when he created Egypt, which they called Tomer, or Land of mr. Pythagoras and Euclid would later attach great significance to this triangle as well, believing it to be imbued with almost magical properties. If two of the triangles from the plot are combined to create one of 72°-54°-54°, as is depicted in the figure above, and then the surrounding circle is marked off into similar 72° segments, the familiar five-pointed star is created when the triangles' intersecting points with the surrounding circle are connected to one another. The five-pointed star was a mnemonic or memory device , which in this case was used by the ancient Egyptians to perform trigonometric calculations. The star also embodies two crossed arrowheads, which is the symbol of the most ancient goddess Neith, the Mother of the Gods. 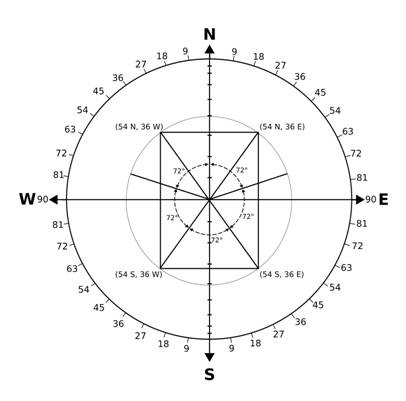 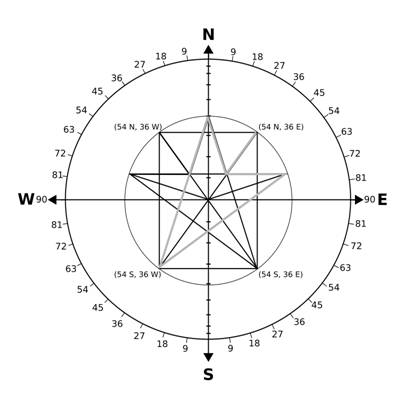 The five-pointed star, symbol of Neith, "Mother of the Gods"

In considering the coordinates from the Chamber's 5th course, their locations on the celestial sphere when projected downwards onto a flat surface, create the following plot: 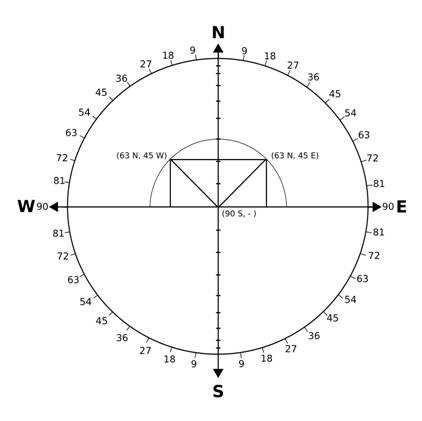 The symbols created by this plot are pregnant with meaning, depicting as they do images that are almost universally understood to represent the earth and creation. The half circle is an Egyptian hieroglyph that represents the Earth.

There is more, much more. The other courses also depict symbols or patterns from the numerical data coded into them. The various symbols and patterns also reveal even more information when they are combined with one another. Other structures in the Pyramid reveal the terrestrial globe together with the lines that define both its orientation and movements, while still others reveal the star charts from the era of the Pyramid's construction. And the Great Flood, does the Pyramid speak to this unparalleled catastrophe as well? Yes. All this and more is coded into its stones, just as the ancient legends claimed. If these things are all true, then, to what age does the Pyramid belong?

About the author: Richard E. Ford is an independent scholar who has done extensive research into the purpose and meaning of the Great Pyramid, and has written of his findings in a recently published work of creative nonfiction, Lord of Eternity; Divine Order and the Great Pyramid. (Order at: http://www.iuniverse.com/bookstore.)

Divine Order and the Great Pyramid