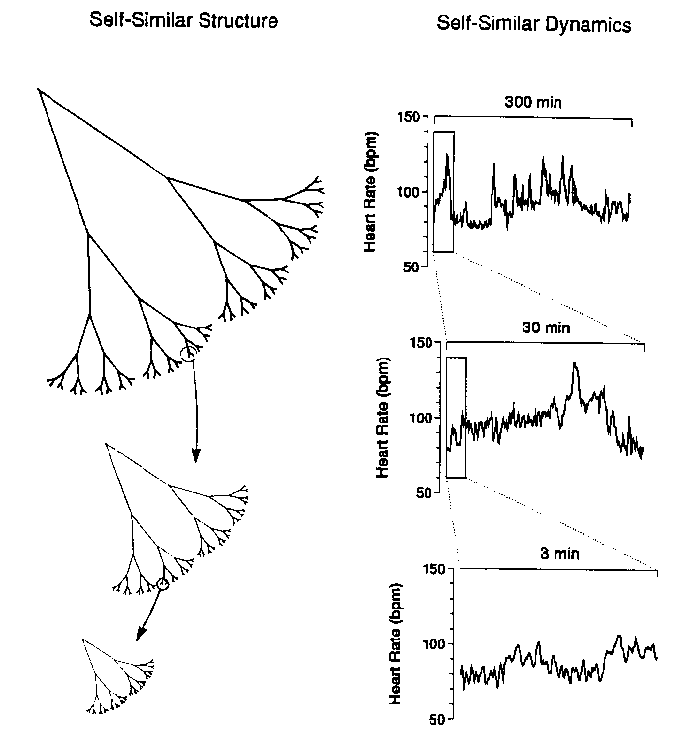 Benoit Mandelbrot wrote a book called The Fractal Geometry of Nature in which he used examples of self-similarity in many different forms of nature. The book explains how fractal geometry can be used to precisely measure natural shapes such as trees and even rivers.

These methods are also used by scientists for other purposes such as finding data within nature. Using self-similarity scientists can accurately estimate the carbon intake of an entire tree just by sampling one leaf. This process can be taken to the next level using fractal geometry to find the intake of the entire forest. Scientists Brian J. Enquist from the University of Arizona along with Geoffrey B. West and James H. Brown came to the conclusion that fractals are a key element to the connection between mass and energy use in animals. 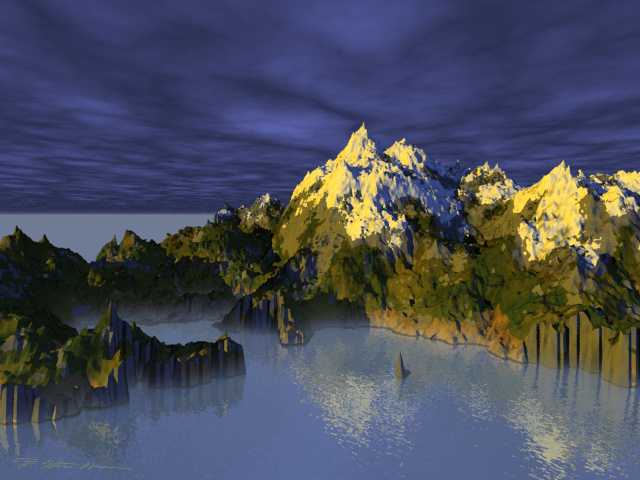 Today’s video games and special effects for movies are created using fractal geometry. This is how movies became more “realistic” over the past few decades. The graphics engineers use a repeating pattern of the same shape such as a triangle for the mountains. A triangle would be broken down into four smaller triangles which would be broken down even further. This method being repeated creates a realistic mountain scene as it appears in the image above. Could this be how nature works with mass using particles in different size groups being held together by two separate forces? 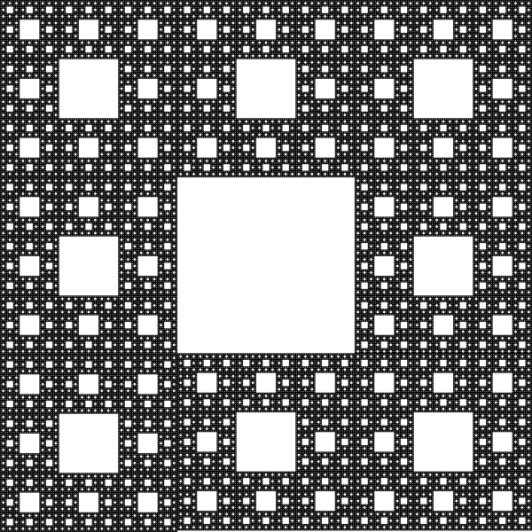 In the image above notice how the squares have a repeating pattern. The pattern becomes smaller and smaller but keeps the same layout. These are used as fractal antennas in cell phones to access several different wavelengths at the same time. Each wavelength controls a different function such as GPS, Blue-tooth or Wi-Fi without interfering with each other. For example, the smaller squares would be for the smaller wavelengths. These antennas demonstrate how fractals and waves co-exist. This method was devolved by Nathan Cohen of Fractal Antenna Systems and is used in almost all cell phones today.

Fractal Wavelengths and their Connection to the Solar System

After realizing that fractals can be linked to such a wide range of subjects I decided to see if I could find a connection to waves in general. Music is broken up into twelve different notes that are on a repeating scale. These scales are different octaves they can start out very low and continue to climb until they cannot be heard by the human ear. Using a guitar as an example it is easier to visualize. When you strike the open E this would be the longest wavelength or the full length of the string. If you were to hold down the twelfth fret it would be the same note only on a shorter wavelength creating a higher frequency note. The twelfth fret is the halfway point of the length of the string. If you were to hold the twenty-fourth fret and strike the note it would be an E note only on a higher frequency once again. If you observe were the twenty-fourth fret is located it’s at the halfway point between the twelfth and the end of the string or were it meets the bridge. If the frets continued they would eventually merge into one another but if you could find the halfway point between the twenty-fourth and end or basically the thirty-sixth fret and it were possible to strike the note it would be an even higher octave E. This is where the fractals come into play. Each time you move up an octave you’re cutting the wavelength in half. Using this method you can continue to find the halfway point until you reach wavelengths the size of gamma rays. If you were to continue this pattern in the opposite direction the wavelengths could continue until they were the size of the entire solar system and beyond.

The image above is an example of the different wavelengths for each octave. The first wavelength repeats only it continuously divided in half.

Using the method of cutting the wavelength in half as a reference I could instantly see a connection to the solar system. If you take the distance of the first four planets they are much closer than the gas giants which are spread out over vast distances.

The blue lines are the approximant distance of the planets from the sun and the black lines are the distance between wavelengths of each octave. When placing one image over the other the similarity can be seen. If the orbit of each planet is created by implosions/explosions within the interior of the sun, as explained in the first article, this is the perfect source of the waves used to separate the planets and hold them in their position. 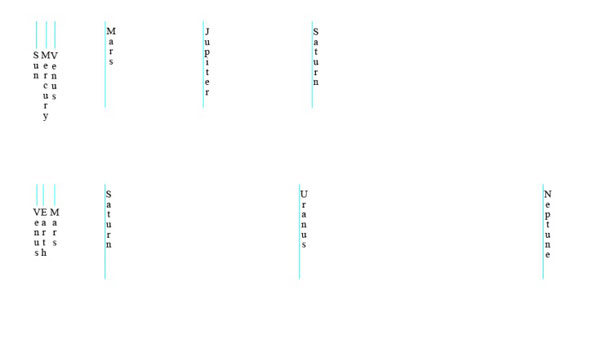 When breaking up the distances into groups of three the self-similarity becomes apparent. This can be scaled down again using the distance between the layers within the sun. These layers are the core, radiation zone and convection zone. There is evidence that nature uses the rule of self-similarity in many forms so why not on a larger scale as in the solar system or even the universe. 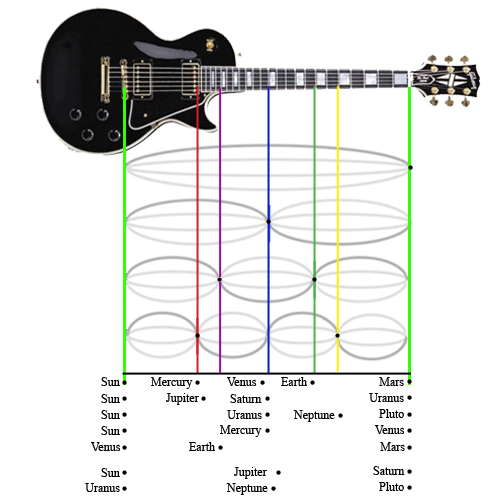 When using harmonics as an indicator for the node positions of the different waves one can see the similarity to all the planets positions. Jupiter and Neptune seem to be the only two planets that are slightly out of line but the similarity is certainly there.

The connection to the ancient world 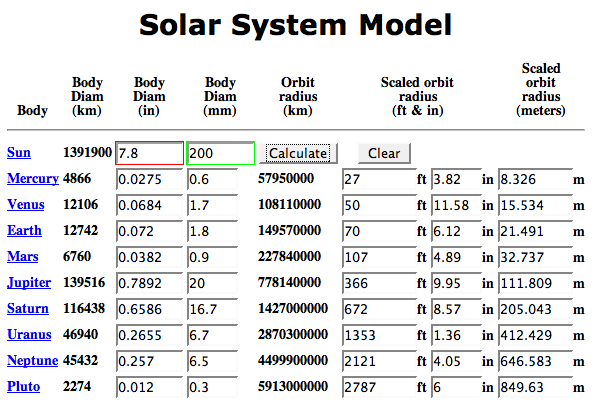 Above are the distance of the planets from the Sun broken down into feet and inches. During this research I rounded to the nearest inch. 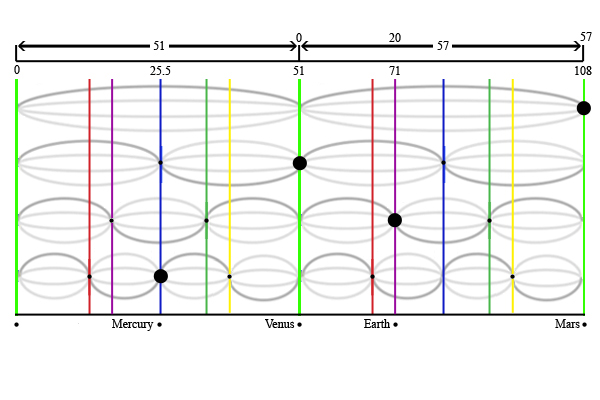 By separating the first four planets into two separate groups the node position for each octave is nearly perfect for the distance of inner-planets. By using Venus as a center point of the two groups they are both different in size. The first group would be the sun, Mercury and Venus. The second group would be Venus, Earth and Mars. By dividing the first group in half the answer is 25.5 this is extremely close to the position of Mercury which is at 27. When dividing the second group into three the answer becomes 19 which is even closer to the Earth position at 20 because of the 51 being subtracted. The Earth being off by one would be 1/57 of the distance.

1) Find the distance of Mercury.

2) Find the distance of Mars from Venus.

3) Find the distance of Earth from Venus.

4) Find the distance to Earth.

You can use this simple rule to find the distance of the first four planets but there is much more to this equation then meets the eye.

Above is a scene from The Egyptian Book of the Dead. This grid is created by repeating the position of the first four planets forward and backwards. Notice the “Eater” is broken up into three different animals within three separate grids. This is one of many observations in this layout. 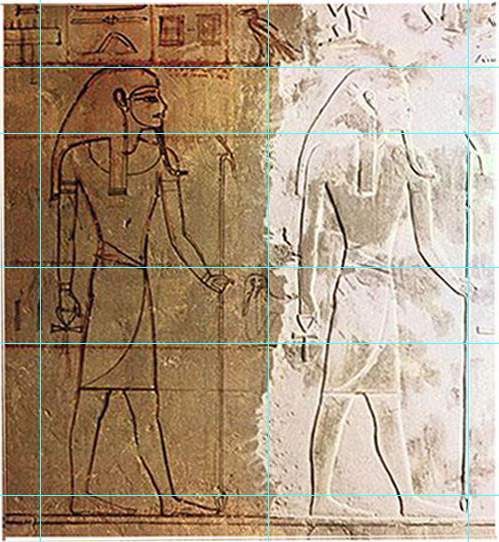 This image shows the actual layout lines of unfinished Egyptian work. The grid in this layout is identical to the same equation of fifty-one to one side and fifty-seven on the other. 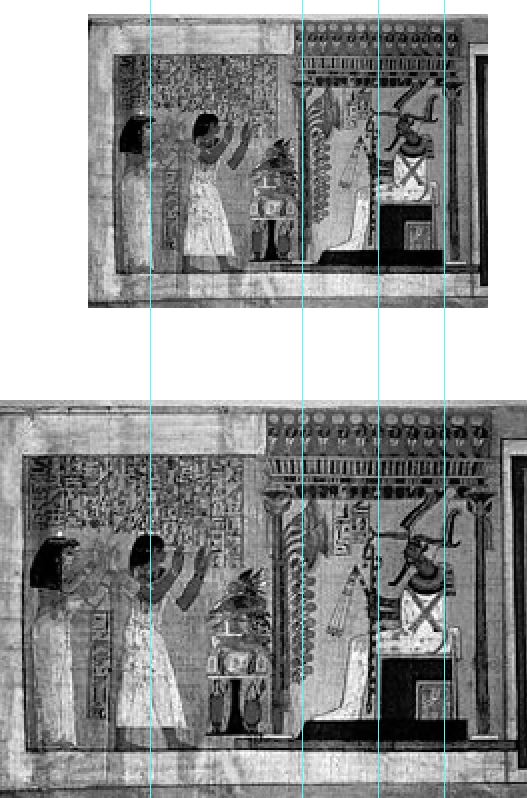 Notice the images above are in fractal form with one being smaller than the other. The front part of the king’s throne aligns in the larger picture while the back side does at the top. 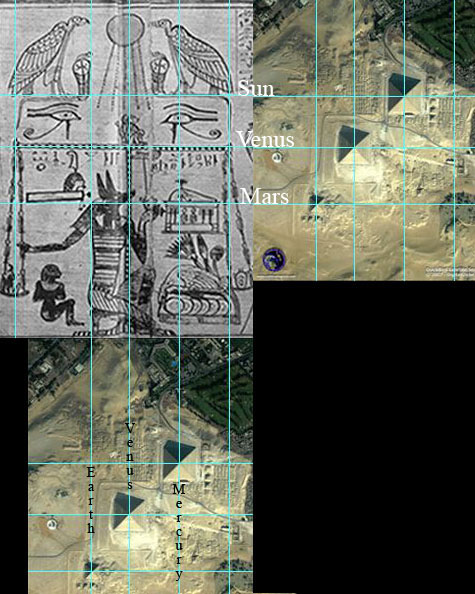 Using the same equation as a grid I found the layout of the pyramids in Giza. The scene was added as an example of how the same grid is universal. How did the Egyptians know the distance of the inner-planets from the Sun? This is a sure indication their knowledge of the solar system was highly advanced. 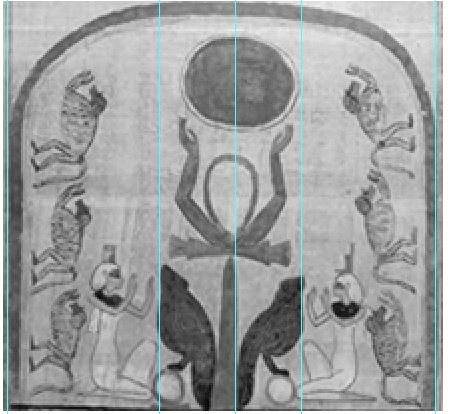 Here is a scene using the same equation for its layout. There are countless scenes that have this same equation imbedded within them could this be a coincidence? I find that hard to believe. 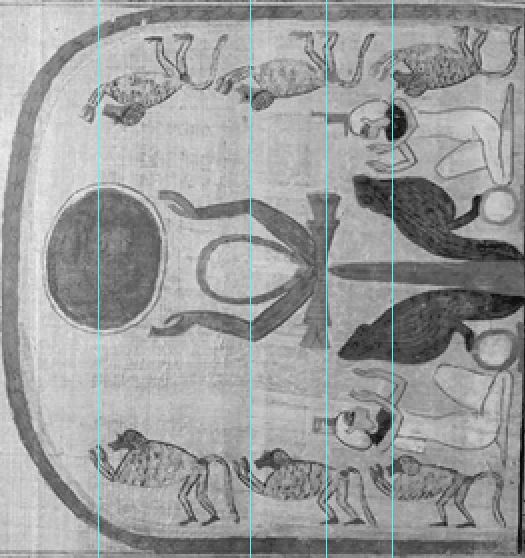 This is an example of how different scenes use the same layout horizontally as they do vertically as a grid. Notice how the reference lines pass through the arms of every figure in this scene. 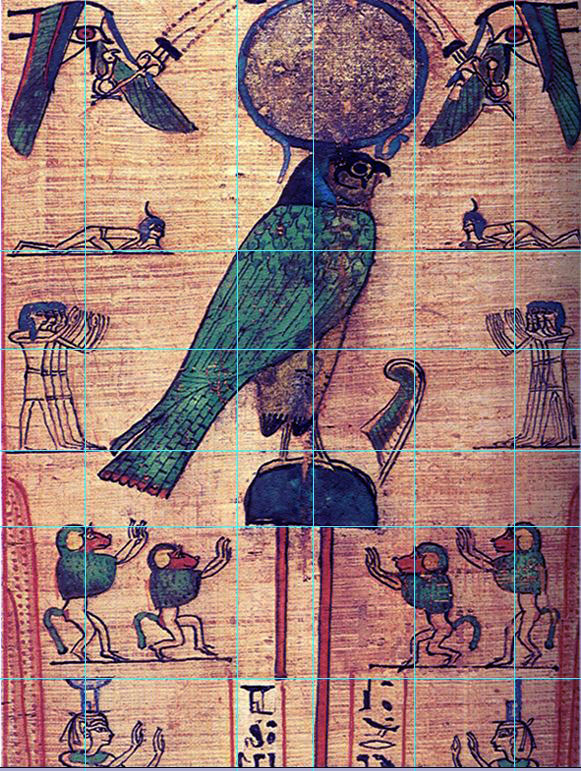 Here is another scene from the book of the dead. The grid in this layout is that of the inner solar system. Notice how the horizontal lines underneath the top two groups of figures align with the grid. These lines are used as reference points even at the bottom of the layout. 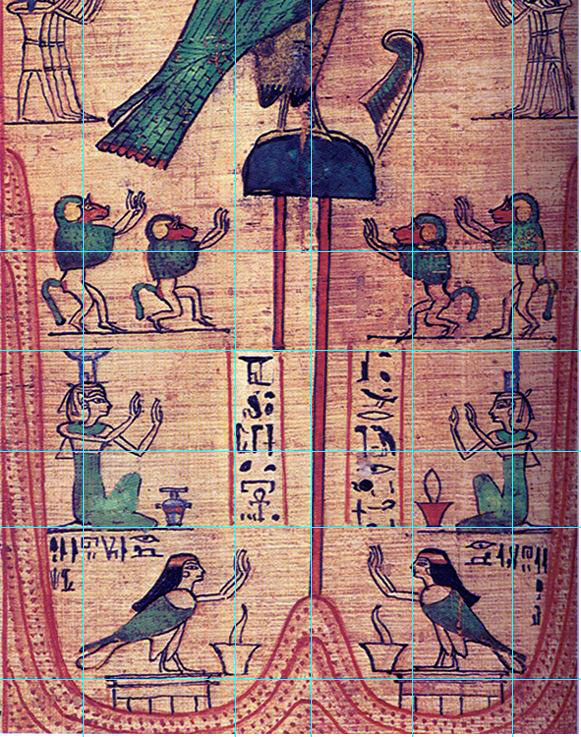 I think it becomes obvious that this scene represented the inner planets. 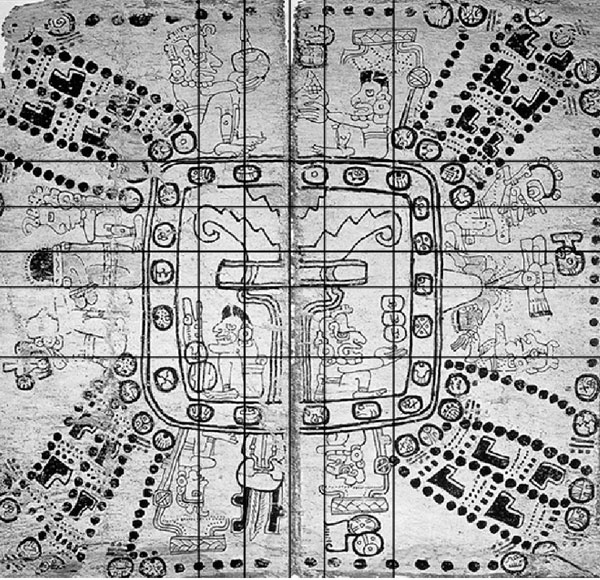 Although I could find the equation within Egyptian art and artifacts a little easier it seems it’s in the Mayans work as well. Looking at this scene I wonder if shifting the grid up and down according to the twelve dots on the right could represent a calendar and the remaining dots are the positions of the different planets as they move through the night’s sky. 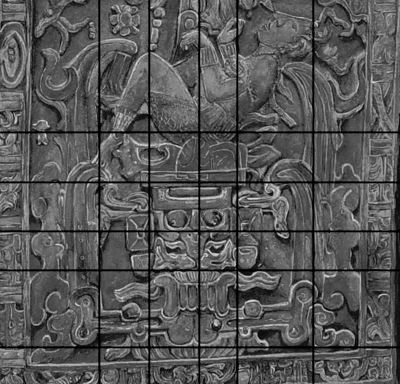 It’s not as obvious in this scene but it appears that it has the same layout of the inner planets as well. 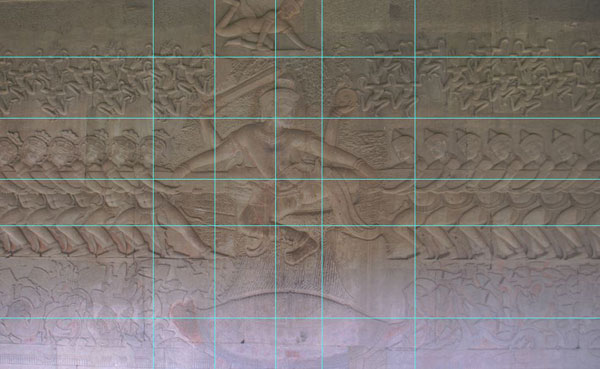 In this scene at Angkor Wat once again I used the true layout of the first for planets horizontally and vertically as a grid. It seems obvious this equation was used by the ancients on a global scale. 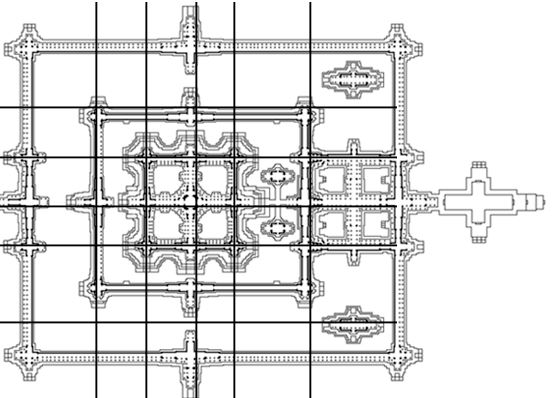 As I mentioned in my previous article it seems there is a mathematical formula imbedded within many different ancient world artifacts and art. This equation is proof they knew the position of the first four planets and they all shared the same knowledge. This leads me to believe these ancient civilizations existed around the same time in a world that was much more advanced than we originally gave credit for.

Realizing the steps I had to go through in order to accomplish this feat I’m convinced there is a lost technology. How could this be achieved in the ancient world by using the connection of harmonics to the position of the first four planets? The only reasonable answer is they had the technology. This is why I believe that sound waves were a huge part of their daily lives and apparently they’re a huge part of our existence. Think about this, the ancients have already built an entire civilization based on these rules that I have just now discovered. I think it’s time we reexamined our outlook on science, physics and the ancient world.

There are more discoveries I would like to share with the world but I’m not getting paid to do this nor do I have a lot of funds. For this reason I need to publish a book or find work in any field involving my research. If anyone can please help me in my journey of discovery it would be greatly appreciated. Please email me at [email protected]. Thank you for reading.