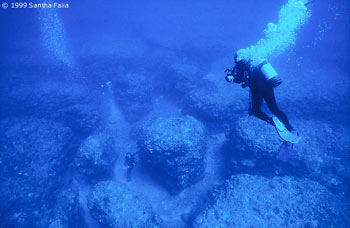 Between 17,000 years ago and 7000 years ago, at the end of the last Ice Age, terrible things happened to the world our ancestors lived in. Great ice caps over northern Europe and north America melted down, huge floods ripped across the earth, sea-level rose by more than 100 metres, and about 25 million square kilometres of formerly habitable lands were swallowed up by the waves.

Marine archaeology has been possible as a scholarly discipline for about 50 years – since the introduction of scuba. In that time, according to Nick Flemming, the doyen of British marine archaeology, only 500 submerged sites have been found worldwide containing the remains of any form of man-made structure or of lithic artefacts. Of these sites only 100 – that’s 100 in the whole world! – are more than 3000 years old.

This is not because of a shortage of potential sites. It is at least partly because a large share of the limited funds available for marine archaeology goes into the discovery and excavation of shipwrecks. This leaves a shortage of diving archaeologists interested in underwater structures and a shortage of money to pay for the extremely expensive business of searching – possibly fruitlessly – for very ancient, eroded, silt-covered ruins at great depths under water. Moreover, with the recent exception of Bob Ballard’s survey of the Black Sea for the National Geographic Society, marine archaeology has simply not concerned itself with the possibility that the post-glacial floods might in any way be connected to the problem of the rise of civilisations. (http://news.nationalgeographic.com/news/2003/01/0110_030113_blacksea.html)

In 1997 a chain of mountains almost 2000 kilometres long and more than 3000 metres high was discovered in the South Pacific. Nobody ever knew the mountains were there before because they are under water – as, in fact, is 70 per cent of the earth’s surface. Marine archaeologists — who are looking for targets much smaller than mountain-ranges under the sea — can therefore be forgiven for finding just 100 submerged sites more than 3000 years old in the past half century. Even at the crude mapping level, it is one of the absurdities of scientific priorities that we now have a better map of the surface of Venus than we do of the 225 million square kilometres of our own planet’s sea-floor.

On land it is obvious that archaeology still has much more work to do before it can honestly claim to have fully understood (rather than merely theorised about) the process by which the great civilisations of ancient history arose. Vast areas of the earth’s surface – the Sahara Desert, for example (which was green for 4000 years at the end of the Ice Age) – have hardly benefited from the attentions of archaeologists at all. And even in countries like Egypt which have been intensively excavated for more than a century new discoveries can still be made that call established views and chronologies into question.

In December 2000 excavations at Abydos in Upper Egypt by a University of Pennsylvania/University of New York team demonstrated that the intriguing religious practise of boat burial – for example the so-called solar boat of Khufu buried on the south side of the Great Pyramid of Giza – is very likely to have predynastic origins. A fleet of 14 boats found buried at Abydos a decade ago were originally assigned to the mortuary complex of Pharaoh Khasekhemwy of the Second Dynasty (circa 2675 BC). However, after thoroughly examining one of the boats (a sophisticated narrow-prowed "sewn" boat about 23 metres long made of wooden planks lashed together with rope), the excavators now believe that "the ships were buried some centuries before Khasekhemwy’s enclosure was built. The fleet may have been intended for use in the afterlife of a much earlier pharaoh, perhaps even Aha [circa 2920 BC], the First Dynasty ruler of Egypt…" (http://www.archaeology.org/online/news/abydos.html) If this is the case, since the boat-burials at Abydos are far from being the work of beginners, then it seems obvious that the practise — and the entire wonderful religious apparatus that goes with it — must predate the First Dynasty.

But by how much?

Another interesting development also announced in December 2000 was the discovery of a group of very unusual ancient tombs at Elkab in Upper Egypt. The Elkab tombs are thought to date to the Second Dynasty, although the site itself has yielded evidence of continuous occupation from 8000 years ago until about 2000 years ago. The tombs are circular stone structures (with diameters of 18 to 20 metres) which in two cases were carefully arranged around large natural boulders. They have been compared with the Neolithic funeral mounds of Europe and, as the Belgian excavators admit, are of a type "thus far unknown in Egypt". (http://www.usatoday.com/weather/science/archaeology/egyptdawn121200.htm)

So much then for the archaeologists having the whole picture about the evolution and development of any civilisation – even ancient Egypt which has been the subject of more archaeological investigation than any other.

But now let’s remember as well that along continental margins and around islands across the world an area bigger than the Unites States of America was inundated at the end of the Ice Age: 3 million square kilometres (an area the size of India) was submerged around Greater Australia alone; another 3 million square kilometres went under around South-East Asia; the Florida, Yucatan and Grand Bahama Banks were fully-exposed off the Gulf of Mexico; huge areas of land were swallowed up in the Mediterranean, the Black Sea, the North Sea and the Atlantic, etc, etc, etc – the list really does goes on and on.

In my view the possibility of a serious "black hole" in scientific knowledge about recent prehistory is plausible, reasonable and worthy of consideration. I therefore propose that the conclusions of modern archaeology regarding the origins and early evolution of human civilisation should be treated as provisional until a comprehensive, global, marine-archaeological survey of continental shelves down to depths of at least 120 metres has been undertaken.

Finished reading Underworld? Still looking for more? Well the experience doesn’t end when
the last page is turned! As described in Underworld,
this area of GrahamHancock.com takes your journey deeper. Come back regularly for
updates on Graham Hancock’s latest research, new and exciting photographs from Santha Faiia, and information on some of the latest findings in underwater archeology.
…And don’t forget to register with the GrahamHancock.com Myteries message board where you
can dive into the debate with others who share you interest in the mysterious origins of civilization!

If you’ve not yet read the book, you can read Chapter 27 here on the website: Confronting Yonaguni.

Third-party Articles on the Themes of Underworld

Yonaguni and the Jomon