The Giza Pyramid Complex is undoubtedly an engineering marvel and work of amazing accuracy, but recently I had cause to wonder if the Great Pyramid is more exacting than previously thought. I wondered if the variations from perfect accuracy were details akin to keys designed by cryptographers that have been intentionally left ‘in the noise’.

Could these ‘keys’ be information that we should focus upon in the hope of gaining a deeper understanding of the pyramid builders?

I have been intrigued by the ideas of Graham Hancock for some time now, and recently saw one of his early lectures on YouTube. In it, he describes the ratio relationships of the Great Pyramid to the Northern Hemisphere as 1:2160 (or one precessional month) x 20, and its orientation to true north as being exact to within 3/60th of a degree. It was then that I thought 3/60th is the same as 1/20th and wondered if this 1/20th of a degree turn from perfect orientation could be intentional and connected to the additional 20 factoring in relation to the Earth’s size.

First, let’s refresh our memories with some details:

Let’s forgive these small distance variations (see Appendix A & C) for the moment, and formulate them by multiplying both sides of the conventional formulas by 1/20th:

On a side note, I wonder if constructing formulas with 1/20th on one side, rather than 20 on the other, might reflect a different sort of proclivity in the designers. That is, a more balanced view of formulas, rather than the typical method today, which might be said to favour elegance over balance. I wonder if the builders would have written Einstein’s E=MC2 as E/C=MC? (see Appendix B.)

Typically, those studying the Great Pyramid disregard this 1/20th of 1/360th of a circle from perfect orientation; certainly, getting such an awesome structure that close to perfect alignment is impressive enough. Many may also suggest that movements of the Earth since its construction could account for this detail.

Another problem to consider is the question of whether the builders divided a circle into 360 degrees, as we do today. (If they divided circles differently, the 1/20th figure would be irrelevant.) In Fingerprints of the Gods, Hancock suggests they did:

The proof of this lay in the creation of a symbolic official ‘country’ exactly seven terrestrial degrees in length, and in admirably geodetic location and orientation to the cardinal points of the Great Pyramid.

I imagine that 360 is a likely way to divide a circle, considering it very nearly equates to the number of days in a solar year.

Also, if we consider that 72 implies 360, as both multiplied give us the precessional year, 25,920, Egyptian mythology contains further reinforcement. In the Osiris myth, Set is able to kill his brother, Osiris, with the aid of 72 conspirators; this is very likely a precessional reference to 1 degree of a 360° whole.ii

Prior to finding these justifications for there being 360 degrees in an Egyptian circle, I wondered if the Great Pyramid could represent this number, and quickly and in quite an unorthodox way I found that it could. If we consider the Great Pyramid to be a reflection or interpretation of the Earth, as described above, then it highlights the poles. And if we draw an arc from the North Pole to the latitude of Giza at 29° 58′ 51″ N, that arc represents nearly 1/6th of the Earth’s circumference. If we do the same from the South Pole, this arc represents 1/3rd of the Earth’s circumference. 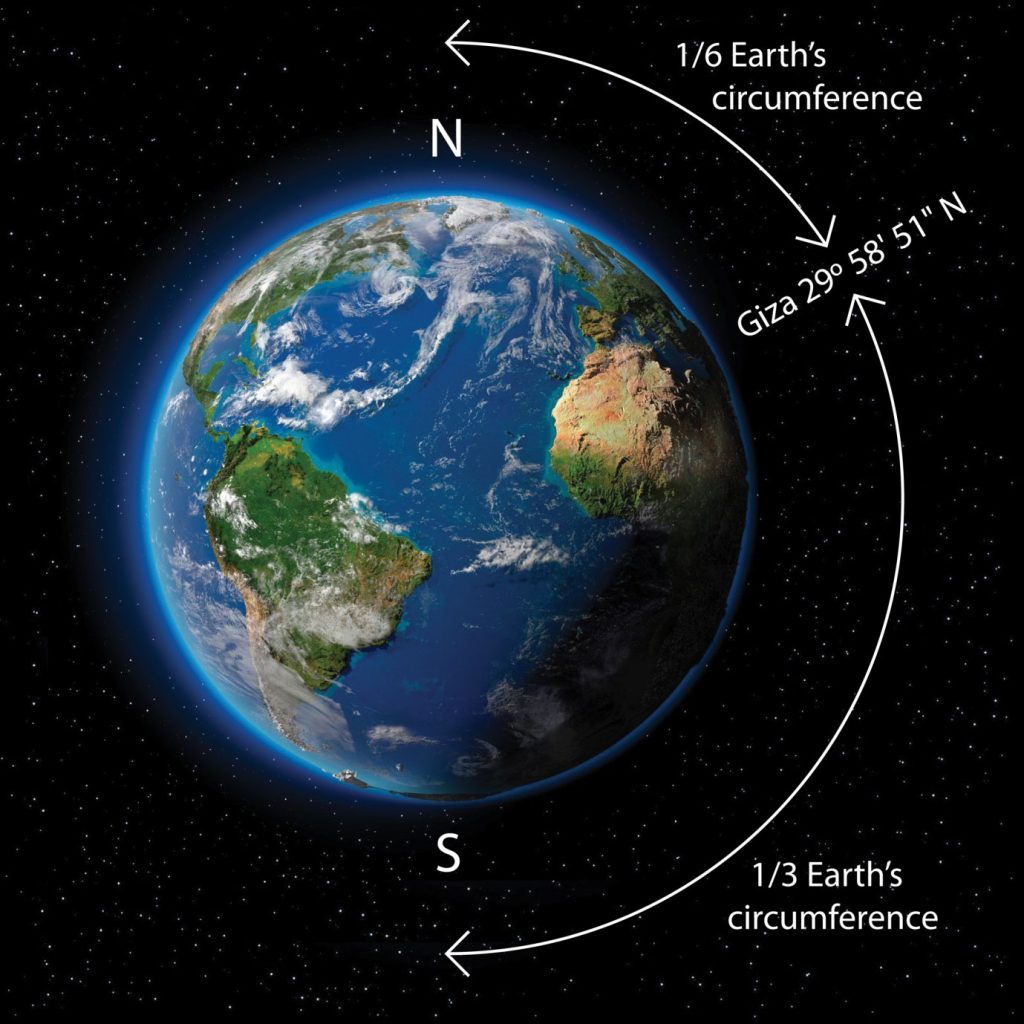 If we now multiply these fractions and the previous 1/20th:

This method uses obvious self-referencing, or what some might consider self-reinforcement; still, others might think this is just a coincidence. However, considering the massive engineering skill brought to bear, coincidence seems unlikely. Also, since these three fractions are all related to circles and might be the only readable fractions on the Great Pyramid, I think it’s not too ‘long a bow’ to draw them together (see Appendix D).

Then I wondered in which direction this turn from perfect orientation is. This detail was hard to find, but in a Robert Bauval video (though not verbally articulated) this screengrab shows it to be counter-clockwise (note the red lines). 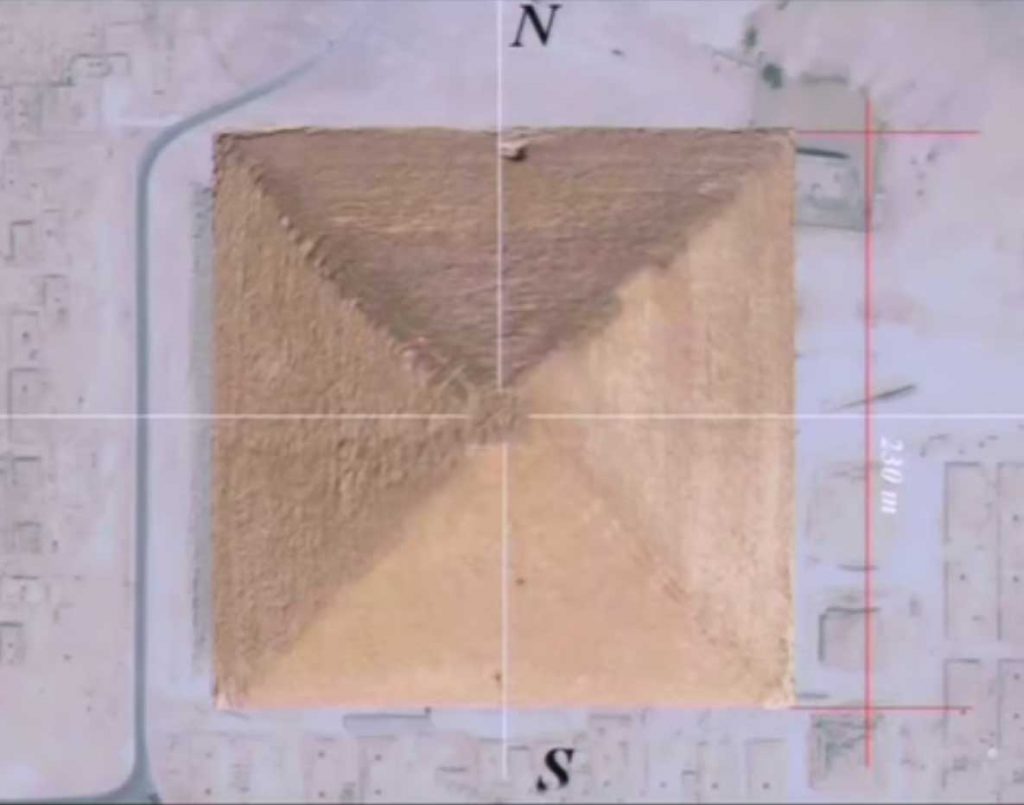 This is, of course, a 50/50 shot and hardly confirmation of my theory, but intriguing nonetheless.

Another intriguing aspect of the Great Pyramid is its latitude at 29° 58′ 51″ N. This position is conspicuously close to 30°N or to 1/6th of the Earth’s circumference when measured from the North Pole (as previously used to generate 360°). (See Appendix C.)

Also of note is Robert Bauval’s statement that, ‘the angle of upper culmination of the pole of the elliptic has varied +/-2 from 52° depending where you stood in the desert region from Abu Ruwash to El Amarna.’ This means that at Spring Equinox, the pole of the elliptic reaches its highest inclination above the horizon, averaging 52° in the Egyptian area. The pole of the elliptic is in Draco, otherwise known as ‘the Great Mooring-post’ of the ‘Imperishable Stars’ in their precessional cycle.iv The fact that the pyramid slope points to the highest point that this post or pole reaches again appears to reflect an understanding of precession. Might the variation from 30°N latitude of 1/52nd of a degree do the same?

The location could be explained in other ways; by Earth’s movements, topographical issues, or simply ways of measuring relevant details, including the oblate shape of the Earth. So I wondered again what the Sun might suggest, and clearly as the Great Pyramid is 1/52th of a degree closer to the equator than a neater 30°N, it might be seen to be reaching towards the Sun. Therefore, this variation might also be considered to be in the correct direction to imply intentionality.

The longitude of Giza (31.208°E) as measured from the arbitrary prime meridian at Greenwich would not seem to be deserving of such considerations. However, we must wonder whether the builders considered Giza to be the then-prime meridian. With its connection of Earth to sky, and the Great Sphinx welcoming the day, it seems the obvious place to start. 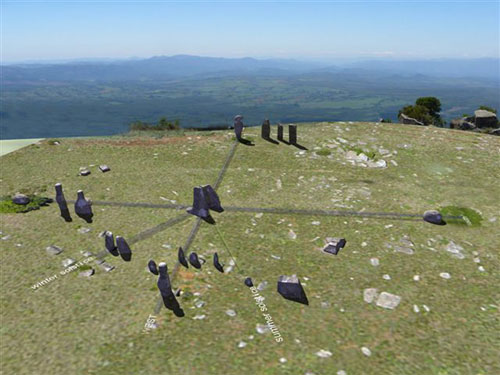 The ancient Inzalo ye Langa in South Africa sits at the same longitude as Giza and translates as ‘Birthplace of the Sun’.v

I began with a fairly left-field contention – that the small variation of the Great Pyramid of Giza from perfect alignment to the cardinal points might actually be intentional and part of the formula that transposes the Great Pyramid onto Earth. As I considered new details, each seemed to reinforce the last. The variations point to the rising Sun, as if the Great Pyramid is saying I meant this!

If all that I have suggested reflects a reality lost long ago, what does this mean for us now? Certainly, it will make it harder for anyone to suggest that the Great Pyramid is the work of Neolithic slaves. My hope is that serious effort will be brought to answer questions that have previously been hamstrung by conventional wisdom; that other disregarded details might actually offer information that could paint a more comprehensive picture of pyramid builder culture.

I should address another variation (touched on earlier); that of the height and perimeter shortcomings suggested by the Earth ratio formulas; 418mm (or 16 ½ inches) in height and 6.24 metres (or 20 ½ feet) around the perimeter of the Great Pyramid. Without doing an exacting survey of the blocks from top to bottom, I think it’s likely that casing and capstones could well account for these variations. Certainly, without knowing the exact original outer shape, a study of these variations would surely prove fruitless.

On another side note, I had to wonder if 20 could be more important generally to the builders, i.e. could their numbering system have been base 20 or vigesimal? 20 seems to have close ties to their division of circles, and if I was right in my earlier conjecture about their possible proclivity for balance, might they have thought to include the digits of the human feet as well as the hands to define their numbering system? The Maya had a vigesimal system; might it have been a carry-over from builder culture?

Some would put the variation from perfect alignment of the Great Pyramid at 0° 2′ 29″ instead of 0° 3′ 0″, which would infer the fraction 1/24. This fraction would make similar integration in the Earth ratio formula infeasible. Similarly, the latitude given as a decimal 29.9792° N would give a fraction closer to 1/48. Not being a cartographer or surveyor I am reliant on the measurements of others.

Appendix D: The Eye of Horus

Much of what I have presented here has used fractions, all with a numerator of 1. This seemed to me a reasonable method to adopt, and assumes the multiplicative inverse to generate whole integers. Subsequently, I learnt about the use of the Eye of Horus and a similar method. Apparently, the eye was also a measurement system, built on progressively halved fractions, each with a numerator of 1. 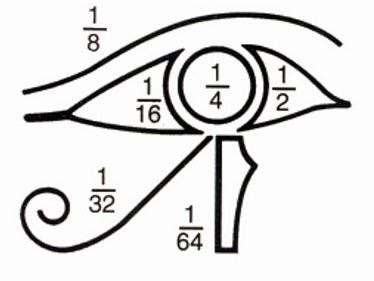 i Taken from Fingerprints of the Gods, and converted from imperial to metric.

iii Ronbert Bauval, ‘THE ANCHOR OF THE WORLD: Did the Pyramid Builders of the Old Kingdom use the Pole of the Ecliptic?’: http://robertbauval.co.uk/articles/articles/anchor.html