That Cusco morning was one of high expectations, or at least it was for Aldair and I, as we walked along the street to where we would board a micro to Ollantaytambo. We were setting off to try to find some strange markings seen on pictures taken from Google Earth above a high mountain valley. The pictures appeared to reveal a location and surrounding landscape that possessed an unusually regular geometry, suggesting it might be an undiscovered archaeological site. Even more than this, the little we could discern from the photographs did not conform to any known pre-Hispanic cultures here in the Andes. Both of us were trying to curb our excitement as we boarded the micro, but neither could we avoid the prospect that we might be on the verge of a major discovery. 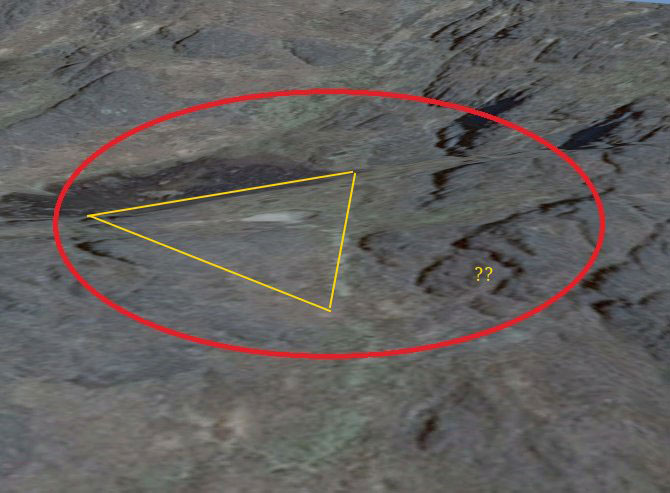 From the perspective of the Google Earth satellite, the landscape surrounding the ‘Hexagon’ seemed to possess a triangular geometry. I am not the first researcher to have identified regular geometries in the Andes and other mountain ranges. Whilst sometimes these may be attributed to distortions in perspective, it is not always the case. © Google.

I had met Aldair for the very first time only the previous afternoon, yet there was something about his manner that told me I could trust him. That was just as well, because I would shortly need to trust this person with my life. He was about to guide me to the place where we were to inspect some markings that had already come to be called the ‘Hexagon’. As we sped off towards Ollantaytambo, we chatted about our mutual interest in Andean pre-history and on the reliability of different kinds of evidence. He told me that in history lessons at school the early chroniclers were never discussed as a source of evidence on the Andes. I found that strange. The chronicler Garcilaso de la Vega – half Royal Inca, half Spanish noble – had been told many things by his Inca uncles. Their memories of Andean lore and science had helped me to understand better, not just the Incas, but many ancient archaeological sites I had explored here.

Fabulous tales on the journey from Ollantaytambo 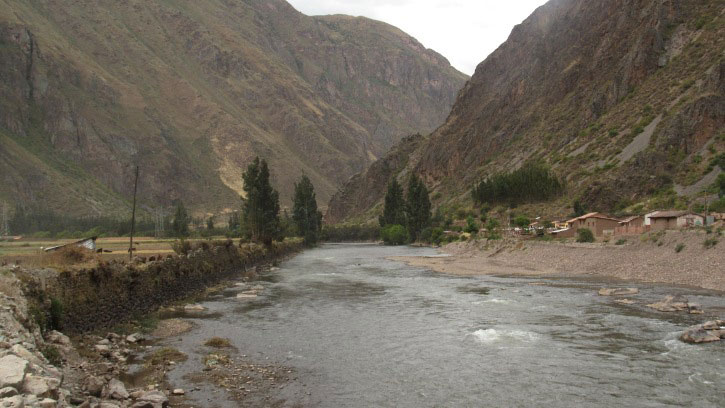 The Huilloc Valley along which we drove before hiking to the ‘Hexagon’. This picture was taken in the dry season when the sides of the valley appear barren. Our expedition was in the rainy season, when there is lush foliage covering its sides. © Aldair Y. Choque Ccoyor

Before long, we had arrived at the small town of Ollantaytambo. After some enquires and bargaining, we found a taxi driver willing to take us along the remote mountain track to where we would begin our trek to the ‘Hexagon’. Aldair used the opportunity to quiz our driver about the ‘Hexagon’ and its environs. To our surprise he knew of nothing; yet this local man proved forthcoming on any number of legends from other places nearby. There were enclosures of gold, lagoons with fierce monsters posing as trout, babies whisked away across mountain sides by mysterious women in white. but nothing about the ‘Hexagon’. We sped along a deep valley where jagged rocks cut into the lush fields and terraces. We shot past local women working the land in brightly-coloured costumes. The dramatic landscape was strangely reminiscent of Snowdonia, or perhaps I was just feeling homesick. After all, this valley was over two miles (3km) above sea-level. 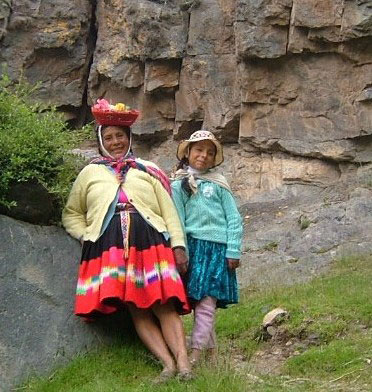 A woman wearing part of the traditional costume from this part of Peru, with her daughter. That traditional costumes have survived for so long in the highlands north of Cusco is testimony to the strength of the culture of the ayllus (clans-communities) here, of which her headdress is a visual expression. © Dave Truman.

The mountain track started to climb beyond the verdant shade of the valley’s eucalyptus trees, emerging into the bright sunlight of open high pasture land. Aldair asked the driver to stop once we had reached a series of sharp curves in the track. He would wait there for the four hours Aldair had estimated it would take us to hike to the ‘Hexagon’ and back. I checked my compass and we set our course due West. In order to reach the location, we needed to climb the side of a mountain called Qosqo Qharawina; Quechua for ‘View of Cusco’. I was glad that we did not need to climb all the way to its summit, even if it did command a spectacular view of distant Cusco. Climbing a steep mountainside at high altitude was not something I relished. Aldair, on the other hand, possessed the twin advantages of youth and of having been brought up on a farm in the high Andean pastures of Canas. He was in his element, if not exactly on home ground. 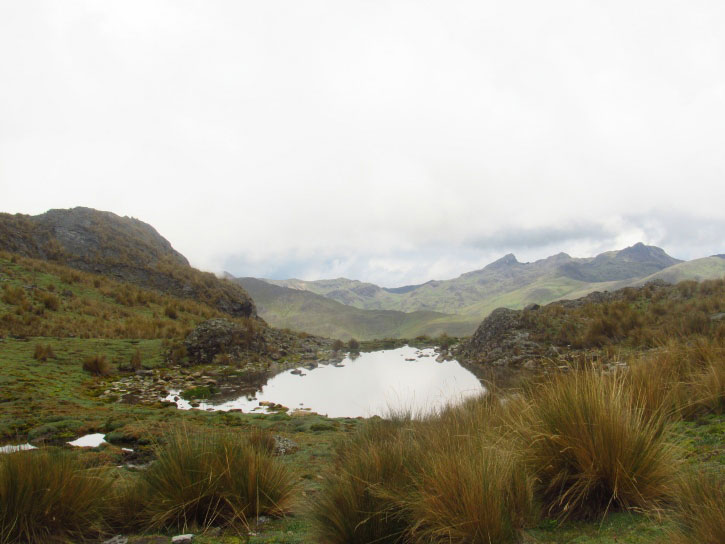 Looking back from a high plateau on Qosqo Qharawina towards Cusco. As is often the case during the rainy season, clouds cover the mountain peaks obscuring any vista of the great Andean City. © Aldair Y. Choque Ccoyor.

The ascent to the ‘Hexagon’

We started to ascend the steep boggy pasture on which a herd of alpaca was grazing. The satellite pictures could never tell me this was pasture visited by shepherds daily. I began to wonder why no shepherd had come across any archaeological relics here. Aldair stopped frequently so that I could draw breath from the parsimonious air. He took these opportunities to point out the many alpine plants beneath our feet, detailing precisely their medicinal properties. For how long, I wondered, would this knowledge stay alive? I heard a dog bark. Aldair took a lasso from his rucksack and I looked around for stones to throw. Packs of feral dogs are a real menace in these parts. We spotted more dogs circling us on the ridge above, then heard a whistle. Aldair relaxed; the dogs belonged to a shepherd.

Our way grew steeper and ever more rocky as we scrambled upwards. The bright sunlight suddenly gave way to a sombre dankness accompanied by a biting wind as we approached the plateau that was home to the ‘Hexagon’. Above, clouds obscured the ridge below Qosqo Qharawina’s summit. Whilst ascending this last stage, our expectations fell. Once we got up close, what appeared to be worked stones from a distance turned out to have been shaped by nature. The satellite pictures of rectangular megaliths turned out to be boulders left by long-departed glaciers. 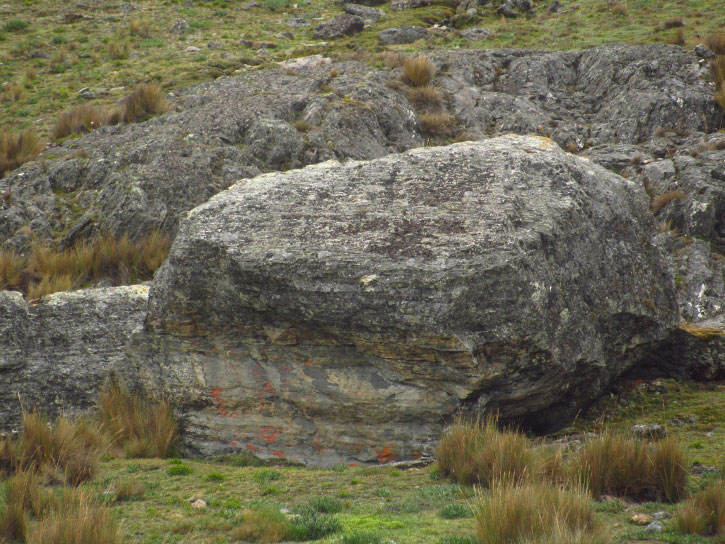 From a distance, this rock looked as if it might have been worked by humans, because it appeared to be regular. On closer inspection, it turned out to be a boulder, or erratic, left by a melting glacier. Note the parallel lines along the rock’s side. This is sedimentary rock, not andesite, basalt or granite. © Aldair Y. Choque Ccoyor

At last, we thought, the plateau where the ‘Hexagon’ stood would reveal its secrets to us. Aldair started forward exclaiming, “That must be an artificially cut rock!” We lunged towards a jagged outcrop lying across the ground. Sure enough, the dark grey stone displayed unusually clean-cut edges, but as we got closer our high hopes plunged yet again into disappointment. Rather than human ingenuity, it it had been the aeons-long rasp of a glacier against the rock’s brittle compacted sediments that had sculpted its angular lines. The satellite pictures had shown a circular white patch in which the ‘Hexagon’ was believed to sit. We looked around the plateau, but could see only lagoons and boulders. 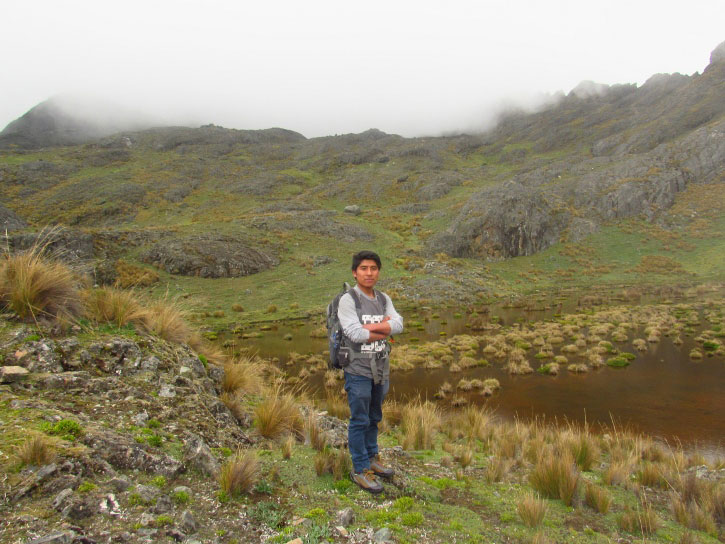 Aldair standing next to one of the lagoons on the plateau. Note the clouds covering the ridge behind him. We would have seen hardly anything, if the ‘Hexagon’ had been located on the ridge above. Moreover, the risk of our getting lost within the cloud cover would have been much greater. © Aldair Y. Choque Ccoyor

Then Aldiair drew my attention to two of the lagoons. Curiously, each traced the form of a near-perfect circle on the ground. He was not sure, but he thought that they may be the traces of qhaswas, or ‘night dances’. These nocturnal events were where young members of the ayllu1 met at a chosen spot to perform traditional dances. It seemed as if we had encountered the last fading traces of an ancient tradition now disappeared, rather than a legacy of stones. 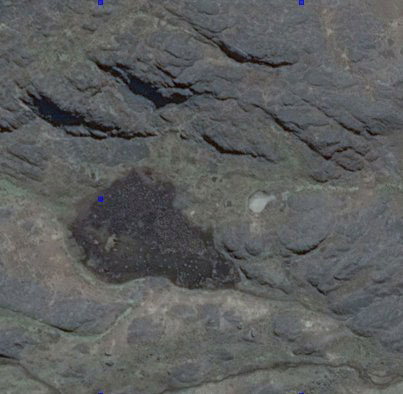 From the satellite picture, there appears to be a large lagoon to the left of a white circular object, which was though to have encompassed the ‘Hexagon’ itself to its right. There also appeared to be steps on either side of the circle. This picture, however, was most probably taken during the dry season. © Google. 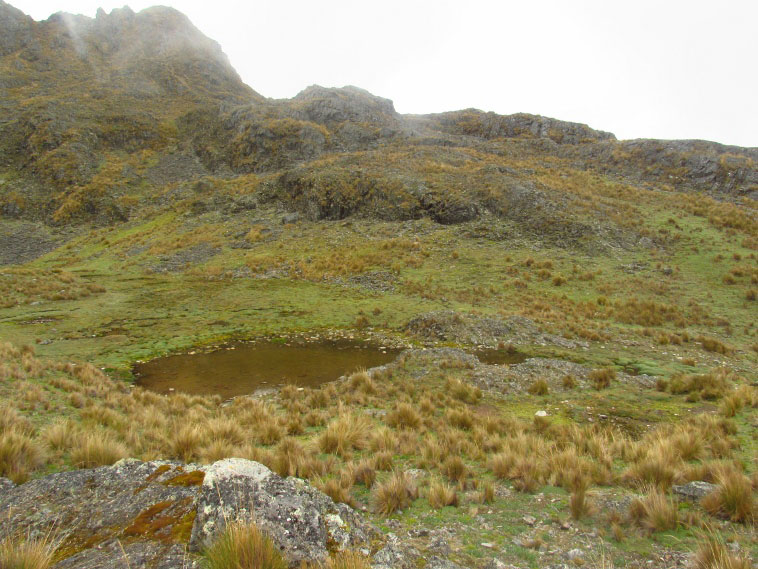 In the rainy season, the whitish patch from the satellite picture has become a small shallow circular lagoon. Its circular shape indicates that it was created by people from a nearby ayllu for dance ceremonies. These are probably not observed today, but the markings remain. © Aldair Y. Choque Ccoyor. 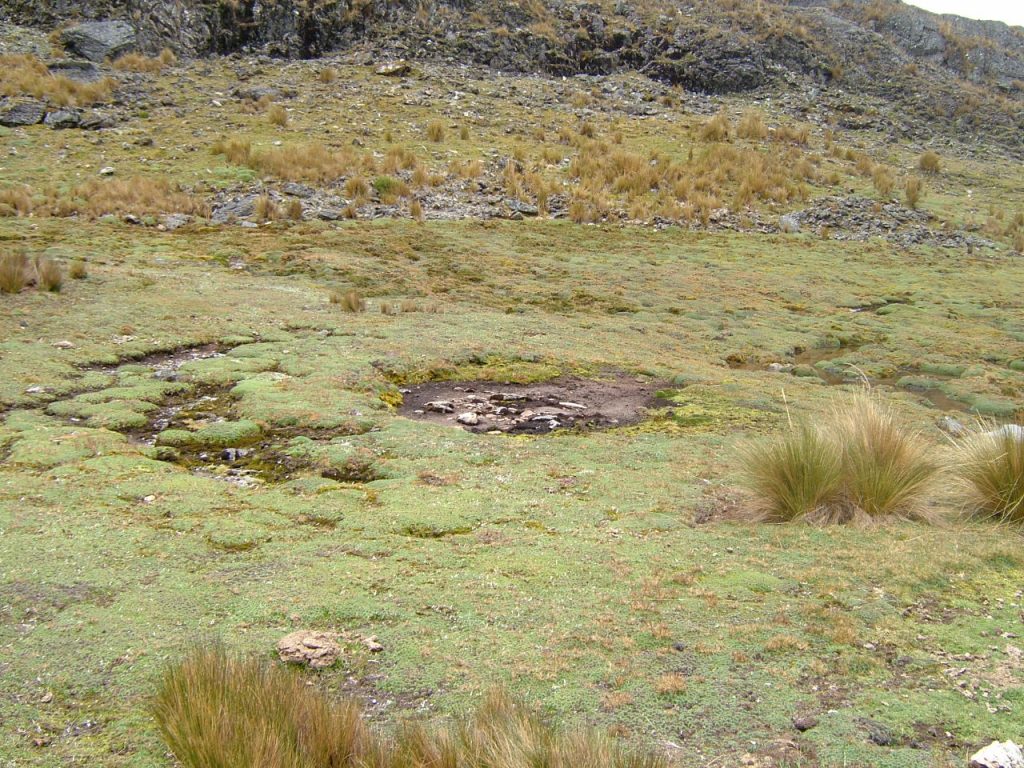 Another circular lagoon near to the ‘Hexagon’. Note the rectangular markings around the circle. Aldair’s knowledge of Andean tradition led him to conclude that this plateau is a Qhasawarina, or ‘place of the night dance’ (Qhasawa). These most probably took place during the dry season. The vegetation has been removed by the dancers’ feet repeating their steps over the patch dry of ground. © Dave Truman. 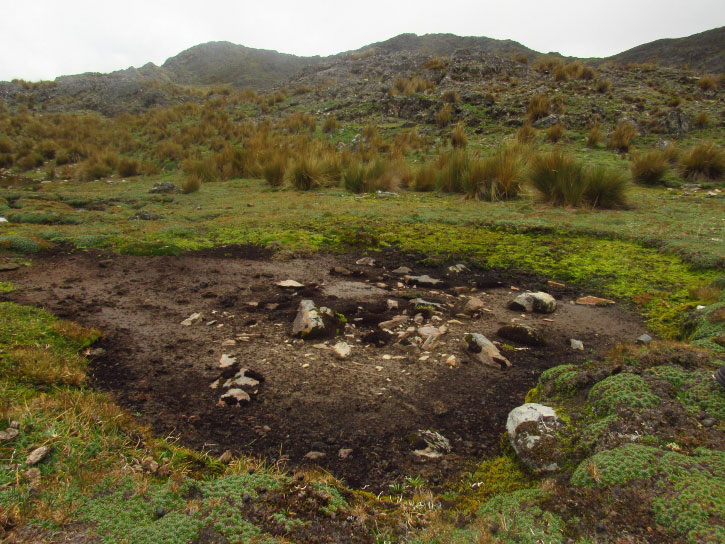 This is probably another circle made for Qhaswas. The night-dance ceremonies serve to strengthen the social bonds within the ayllu. Ayllus were used by the Incas to promote social cohesion, but their origins are far more ancient. Some say that Wiracocha established the ayllu system as part of a comprehensive cosmology, where each ayllu formed part of a tribe. © Aldair Y. Choque Ccoyor.

In the micro on the way back to Cusco, we fell silent as the sun set and the moon rose in the east. It cast its frosty beams over the glistening snow-clad Cordillera and I slipped into a reverie on the day’s events. I mused over how modern satellite technology can sometimes convey an illusory omniscience. As if in contrast, my imagination then conjured a moonlit qhaswa, where young people danced and fell in love. The next morning I opened a link my friend in Liverpool had sent me by email. It was an article in The Guardian about how an eclipse had made the moon look both red and blue the night before. My mind drifted back to our journey home the previous night and to the vision of the moon as it sailed over the Andes. It was round and had the colour of full-cream milk.

1 An ayllu is a family-based community that works a defined area of land in the Andes. Theayllu system was used extensively by the Incas to carry out public works, but is probably much older. It is equivalent in some ways to clan system of another highland people, the Scots.

Dave Truman is a writer, researcher and traveller who divides his time between South America and the Wirral Peninsula in England. Over the last four years, he has been doing research for his forthcoming book, to which he has given the working title, Lost Science in the Andes: understanding the minds that shaped the great civilisation of the Ice Age.

Aldair Yulinio Choque Ccoyori is an independent tour guide who specialises in customised trips to some of the lesser-known archaeological sites in and around Cusco and in the Sacred Valley of the Incas.

5 thoughts on “High Prospects Of The Andes”