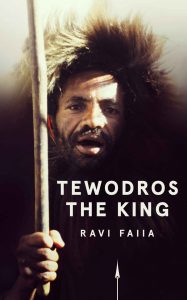 “Ethiopia has been a big part of my life and it has played a much bigger and greater part in the life of the world than many realise. Ravi Faiia’s brilliant new novel Tewodros The King reimagines the story, solidly based in historical fact, of the Ethiopian emperor Tewodros II and his extraordinary confrontation with the might of Victorian Britain at the peak of its imperial power. There could be only one winner in such an uneven conflict, but it is the Africans who are the real heroes of this gripping, fast-moving, cleverly-nuanced story of courage, conviction and hope in desperate times.”

The written record contains a full and detailed account of the British Empire’s punitive expedition to rescue British subjects taken hostage by Emperor Tewodros II of Ethiopia, resulting in his suicide and the destruction of his capital in 1868. The way the story is typically told reflects some of the dominant themes of a colonialist mindset; juxtaposing technologically backwards and morally bankrupt Africans against the civilized and respectable Europeans who also happen to come away with plenty of commendations, medals and loot.

The stories that don’t get told as much in history, or even in fiction, are those where Africans take center stage as the cultured, sophisticated heroes that they are – witness the great success of a movie like Black Panther, remarkable for its exceptionalism. Ravi Faiia’s reimagination of the Tewodros story gives Ethiopia the recognition it deserves as a real-life Wakanda, never colonized by Europe, with rich and powerful traditions stretching back to Biblical times.

Tewodros The King follows the journey of a young prince who shows that there are qualities greater than brute force, and legacies greater than individual achievement. As he navigates the non-stop adventure of forging an empire and clashing with the greatest military power on earth, those who seek to change Ethiopia are instead changed by it.

5 thoughts on “Tewodros The King: Ethiopia’s triumph in the British invasion of 1868”