We have decided that instead of publishing these four articles separately, it would serve a better purpose if they were presented together. The reason for doing so is simple, these articles as a collective describe in detail what is arguably the most important archaeological site in Australia. It has been claimed both in the national press and by local Original custodians that at this site Original Clever-fellas and Kadaitcha men came from all parts of the country to sing, dance and perform sacred ceremonies. There is, as far as we know, no parallel or precedent in including representatives from every tribe in Australia enacting rituals and singing songs in their language inside another tribe’s estate.

This site was proclaimed by Frederic Slater (President of the Australian Archaeological Society) to be “Australia’s Stonehenge.” Slater was mistaken, Stonehenge pales by comparison. Nobody has made claim that the alignments of stone pillars at Stonehenge contain “all knowledge that was, is and will be,” as Slater did when interpreting the alignments, shapes and markings on the 184 stones standing on what he felt was “the oldest religious mound in the world.”

Claimed by Slater and Original keepers of the Old Ways to be evidence of the first language spoken or recorded, it is not even the precedence or volume of vocabulary (Slater had a count of over 28,000 words) that was so amazing, but it is what was actually recorded for posterity that asks so many questions and opens up new horizons. The sentiments expressed and encouraged are as noble as they are enlightening. The narrative chronicled in stone runs counter to the traditional take on how language evolved. Scholars will have us believe that the first language spoken was crude in presentation and limited in content, focusing primarily upon the most elemental needs and issues that directly relate to eating and survival. Yet what was on display on this mound is the total opposite.

These tabernacles are as prophetic as they are illuminating, in that our first directives are devoted to refining the soul, in finding purpose and spiritual direction and conversing with the Creator.

Hidden from the public eye for close to 75 years, this holy site has been found again. The stones that stood on the mound are close by and we have a map charted just before the site was bulldozed recording the position of each rock and the associated meaning in the First Original tongue. The songs that activate the site have been given to the site recently, and this mound can be reclaimed and restored. The next four articles will run in sequence and will explain why this site is so special and utterly unique, and equally, why those in control refuse to even acknowledge this complex even exists.

Shunned
The Hidden History of the Original Australians

According to Frederic Slater, who was the President of the Australian Archaeological and Education Research Society, an Original stone arrangement he and a colleague were investigating throughout 1939 is “the Stonehenge of Australia.” Assumed to be lost for the last 63 years, this impressive and complex sandstone arrangement is much more than a collection of rocks, signs and symbols positioned on a mound. According to Slater, “the mound is one of the oldest; I should say the oldest, forms of temples in the world, and dates back to the… advent of first man.”

Not only was the mound the first temple, the narrative and wisdom it chronicles is as profound as it is sublime, so much so that Slater claimed it formed “the basis of all knowledge, all science, all history and all forms of writing.”

These are extremely bold claims to make; to suggest that the very first language was spoken and recorded in stone in Australia carries with it many inconvenient historical implications. Modern humanity is assumed to have had its genesis in Africa. We are told a few restless inquisitive souls set foot outside African soil some 60,000 years ago and spread their culture and genes. In this theoretical construct, there is no room for Australia to be anything other than an afterthought and merely an African colony peopled by mariners who surely spoke before setting sail to Australia.

Despite the unpopular stance advocated by Slater, his research was meticulous and the methodology sound. More to the point, such was the strength of the case he made on behalf of this arrangement being the First Language, in 1940 representatives of the Australian Government approached the farmer and threatened to confiscate his land because of these rocks. The landholder under threat was openly sympathetic to the archaeology being done, but realised while the stones stood he would lose his land, income and livelihood. Within days of the threat by Government, the stones were reluctantly bulldozed and the land was left alone. Slater had lost his proof and not another supporting public statement was made. The whole unpleasant episode was expunged from the public arena and Slater’s correspondence was apparently lost or destroyed.

And so this historical vacuum remained… until about three months ago when local teacher Richard Patterson was rummaging through some discarded files in the back room of the local Historical Society. Amongst the accumulation of papers and documents were Slater’s letters to his on-field colleague. Soon after, Richard contacted me and my team, and so the unraveling has began.

The First Sacred Language that Slater claimed to have deciphered is very complex, multi-layered and at his last count of “28,000 words,” far more diverse and complicated than what could be assumed in relation to the very first language spoken on Earth. We are of the belief this complex language spread throughout most of the coastal regions of Australia unified under Southern Law.

While historical and linguistic texts propose that the first tongue was crude and limited to the most basic emotions and objects, which then slowly increased in number and sophistication, here a symbol can have four different meanings. This formalised method of communication was made up of numbers, hand signs, stone arrangements, elements, trees, letter sounds, animal shapes, etc. The intricate combination of all manner of apparently unrelated themes and disciplines creating a seamless blend into one formal script, is in contradiction to the expected rudimentary linguistic starting point, and calls into question many assumptions relating to human ascension and development.

Leaving aside that reports from the Original Elders of Lore are in accord with the integrity of Slater’s claims, the logistics, technology and labour involved in creating this mound was unparalleled in this country… and deserving of further archaeology on site. By my estimation after viewing from a discreet distance, the hundreds of tonnes of sand, clay and sandstone that make up one mound deposited on top of this flat swampy plain is not part of the local geology. According to Slater and his co-worker, the closest deposit of sandstone was more than 20 kilometers (12 miles) away. The problem is, until the arrival of British settlers in Australia, no-one in this country had a wheel, pulley, wheelbarrow or metal chisel to cut and move the rocks 20 kilometres, and nor is there any other example in Australia of a mound or stone arrangement weighing over a tonne.

Quite simply, this Original construction doesn’t fit into any academic book or curriculum.

The Mystery of Life

What only unsettles the academic climate further is the content of the narrative contained within this stone arrangement called “The Mystery of Life.” The opening placement of stones on the southern edge, which looks very much like a medicine wheel, was interpreted by Slater to read as “guided by truth, man came to Earth through darkness from light of life that shines far off.” This extra-terrestrial theme of somebody or being coming to this planet from “far off” is repeated throughout these constructions, extolling that the “truth was brought out on wings to Earth” and “the Divine Light from afar to the Earth brings the soul to man.”

It is a site without parallel on the east coast of Australia at so many levels. The means of construction, significance, content, sacredness and real possibility that this arrangement chronicles the first time modern humans devised a formal means of expressing words and thoughts, are but some of issues that need to be investigated.

In what only adds to the intrigue, Slater is not only adamant that the ancient Egyptians were not only present (and most probably assisting in the transport of sandstone and fill) but they came in homage and reverence. He asserted that “there is no mistaking the fact that the Aborigines… gave not only to the Egyptians their knowledge and their foundation of hieroglyphics and their philosophy, but formulated the basis of all knowledge in the beginning, now and to come.”

The archaeology conducted on site is still in the process of being compiled and analysed, however a few simple observations can be already offered. The chances are extremely high that this stone arrangement is an actual account of the First Sacred Language and conveys both historical details and a prophecy of times soon to come. The first mound is definitely artificial, its shape is too symmetrical, the placement on a flat swampy plain is dramatically at odds with the surrounding topography, and the sand, clay and sandstone that makes up this construction is in contradiction with its immediate geology. Throw into this mix confirmation from Original Elders and Custodians versed in Original Lore and history that this is one of, if not the, most sacred site in Australia, and we begin to see why Slater was so adamant that this is “Australia’s Stonehenge.”

Frederic Slater was an Egyptologist. He was the President of the Australian Archaeological Research and Education Society. Australian Government officials approached the landholder in 1940 and threatened to confiscate their freehold land simply because of these standing stones. These are facts. Slater’s opinions and our research of them is obviously up for debate and alternative explanations. But with the bounty of archaeology found on site and Elders confirming Slater’s translation, this stone arrangement is potentially the most sacred archaeological site in Australia.

There is no other explanation on offer. 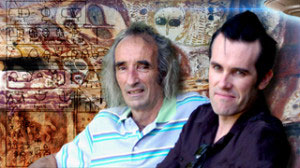 Steven Strong is an Australian-based researcher, author and former high school teacher with a background in archaeology. He was involved in the formation of a Graduate Diploma of Aboriginal Education for the NSW Department of Education, writing units on Traditional Law and Contemporary History. He also co-authored the highly successful “Aboriginal Australia: A Language and Cultural kit” and has written over a dozen articles on Original history and lore for the National Indigenous Times, with four articles also appearing in New Dawn magazine.

Evan Strong is a researcher, historian and author with a Bachelor degree in the Social Sciences, majoring in psychology and archaeology/anthropology.

Together they have co-written 4 books: Constructing a New World Map, Mary Magdalene’s Dreaming, and Forgotten Origin (published by University Press of America) and their latest publication Shunned, which thoroughly refutes the Out-of-Africa theory of human history and examines the archaeological and DNA evidence that suggests Australia is where modern human beings derived.

With close to 30 years of contact with original Gumilaroi people and tribes of the Bundjalung Language Confederation, and the benefit of extensive consultation with many Original Elders, Steve and Evan’s work is to reveal the ancient story of the Original people, a narrative that was almost lost to aggressive European colonisation.