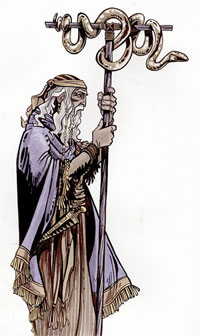 Moses is a perplexing historical character. And, yes, I say “historical,” because I believe there is not reason to doubt his existence in real history simply because he is predominantly mentioned in books of faith. But even more perplexing than Moses, is the event inextricably linked to his name: the Exodus.

Dr. John Ward and I are working on the text for our upcoming book exploring the historical evidence for the so-called “Great Exodus,” as well as the historicity of its main character and his links to sitting monarchs in Egypt. Dating the man is fairly easy, depending on which dating system and chronology of kings you engage, but proving his existence is nearly impossible without speculative extrapolation and attribution.

The Exodus itself fairs no better when under the scrutiny of historical data, archaeological research and academic study. Even the bible itself is weak on providing verifiable historical facts, which can obviously be attributed to the nature of the book in which these events are recorded, that being an offering to build faith as opposed to provide research material for future generations.

According to the biblical narrative and rabbinic tradition, Moses grew up in the royal courts of Egypt, the adopted son of “Pharaoh’s Daughter.” He was born to a Hebrew couple of the tribe of Levi, the eventual priestly caste of Israelites. They and all the Hebrews were, according to the book of Exodus, slaves to the Pharaoh of Egypt, and had been for some 350 years since their original family migrated from Canaan to Egypt during a time of famine.

In the biblical narrative found in the book of Exodus, it was at this time that the (unnamed) Pharaoh of Egypt – I believe him to be Thutmosis I – determined that the Hebrews were growing too numerous, and in order to “thin out their herd,” under fear of potential uprising, he sent out an edict that all Hebrew babies under the age of three years be killed. This bloody program was enacted, but Moses’ mother kept him hidden until he had grown too big to hide. She then put him in a papyrus basket smeared with pitch to make it water-tight, and floated him down the Nile River with clear intention of having him picked up by someone who would care for him, playing into the spiritualism and superstition of the times. She sends Moses’ older sister, Miriam, to follow the basket along the banks of the river, to ensure the babe’s safety along the way – and perhaps to even guide him to a pre-intended destination. The basket and baby drift down the river shallows and wash into the pools outside the palace in Thebes, and the very young daughter of Pharaoh discovers Moses. According to the biblical account, she is confronted by Miriam, who offers to take the baby to “a woman she knows” as wet nurse. The Royal Princess agrees and sends the baby with Miriam, back to his mother to be weaned and until she is old enough to claim him as her own. Four-to-six years later, he is returned to the palace to start his life as a son of the House of Pharaoh. And there he remained, according to the Jewish story, for 40 years.

While there are many theories surrounding the dating of Moses and the Exodus, my focus remains in the middle of the fifteenth century BC, placing the event of Exodus in 1446 BC, during the fifth year of the reign of Amenhotep II. I arrive at this date based on an Old Testament reference that includes an event that is a “rock solid” date in history: the founding of Temple 1 in Jerusalem, also known as Solomon’s Temple. While there is great dispute over the very existence of King Solomon of Israel, there is no dispute over the dating of the temple attributed to him, as it is historical and archaeological fact. The date of the founding of Temple 1 – give or take a disputed three-to-six years in either direction – is 966 BC. 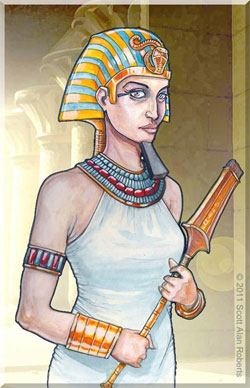 Is it really that easy? If the biblical narrative is accurate, 480 years had passed since the Exodus, and Temple 1 was built in 966 BC. That gives us 1446 BC as the date of the Exodus, the date when Moses was about 80 years old, according to the Jewish story. If that is so, then Moses would have been born in 1526 BC, under the reign of Thutmoses I, who’s only daughter was a young girl named Hatshepsut, who actually bore the distinctive, singular title of “Pharaoh’s Daughter,” meaning, “Pharaoh’s Only Female Heir.” If it was indeed the remarkable Hatshepsut who found Moses in a basket in the Nile, and she indeed raised him as her own – once she became of age to claim him five-to-seven years after 1526, Moses would have been an amazing man, indeed.

Hatshepsut bore no royal heirs to succeed her on the throne, save for her daughter Nefrure, who died around the age of sixteen, sometime between year eleven and sixteen of her mother’s reign. Hatshepsut had been married to her own weak and sickly brother, Thutmoses II, who died, leaving his very young son of a “lesser/harem” wife as heir, Thutmoses III. Hatshepsut became co-regent with her dead husband’s son, then absolutely usurped his throne, completely dominating his reign as the Pharaoh, herself, until the day she died around 1482 BC. An interesting speculation, however, is that Hatshepsut, having a deeply set hatred of her brother/husband, who died leaving a son of a lesser wife whom she also despised, found in her own adopted son Moses, someone whom she could groom to take the throne in her place, pushing Thutmoses III completely out of the picture. With vast evidence as to the immense hatred Thutmoses III bore for his step-mother, Hatshepsut, after her death, lends some credence to the foundation of this theory. After she died, Thutmoses III struck her image from every wall, painting, sculpture and relief – even those on her own temple of Dier el Bhari. It is also recorded that he spoke of Hatshepsut on the day of his ascent to the throne of Egypt as “that hated, lying, despicable woman.”

When Moses is forty years old, according to the biblical narrative, he and his royal entourage encounter an Egyptian task master beating a Hebrew slave. In anger, Moses strikes out and murders the task master. Fearing this would become known, he flees Egypt and runs to the land of Midian, where he becomes a shepherd and marries the daughter of the pagan high priest of the region. Then his story falls silent for 40 more years.

In the meantime, one must wonder what really happened behind the scenes of the biblical story. It is my contention that a likely candidate for Moses during his forty years of life at the Egyptian palace was a man named Senenmut, who was the tutor to Hatshepsut’s daughter, Nefrure, as well as Hatshepsut’s most trusted advisor. Keep in mind, a royal tutor was not necessarily a scholarly, educator type, they were generally men of military accomplishment and some importance. According to Jewish traditional stories in the Mishnah, Moses had been a fiercely ambitious general under the pharaoh. 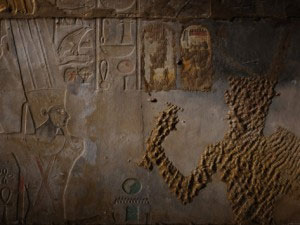 Hatshepsut’s image chiseled away from her own temple of Dier el Bhari.

Senenmut lived under the gracious and benevolent eye of Hatshpsut, some accounts even hailing to their relationship as possible lovers, despite the nearly ten-year age difference between them. Senenmut was granted nearly twenty titles bestowed on him by Hatshepsut, everything from Vizier to Chief Royal Architect. The last title she bestowed on Senenmut was “Mother’s Brother,” in essence a title elevating a son to the status of equal with his mother, allowing him to claim equal status of “brother to the gods” with his pharaonic parent. But somewhere around 1486 BC, Senenmut disappears completely off the Egyptian scene. Empty, unused tomb and no record of what happened to him. He simply vanished. Incidentally, if you’re keeping up on the mathematics, if Moses was born in 1526, he would have turned 40 in 1486 BC., the same year he is said to have murdered the Egyptian task master and fled Egypt.

So we are now back to Moses in Midian, where he lived as a shepherd for the next forty years, so says the biblical account. He had his burning bush experience, and was sent back to Egypt by none other than God for the purpose of freeing the Hebrews from slavery. Moses, as we read in the book of Exodus, balked, hemmed, hawed and came up with excuses to not go, but lost the argument with the Almighty. But this brings up a deeper question for me: if Moses was indeed the adopted son of Hatshepsut, and being groomed to take the throne in her place, why would the murder of a task master, one step above a slave, jeopardize his life and career as a member of the royal household? Simple answer, it wouldn’t. So why did he flee?

It is my contention that there is obviously much more at play than what we read in the Hebrew scripture, and I speculate that since Moses could very well have been raised to take his adoptive mother’s place on the throne of Egypt, he had a voracious political foe in her other step-son, Thutmoses III, and I believe it was this murdering of the Egyptian task master that gave Thutmoses III the political opportunity to off his rival as well as his hated mother’s favorite. The dates fit, the timeline works, but there simply is no proof beyond speculation built upon the circumstantial acts of the historical figures. And when Moses is commanded by God to return to the pharaoh of Egypt and demand the release of the Hebrews, what is his first refusal? “I can’t go back there, the Pharaoh is seeking my life!” Again, I must ask, why, after 40 years in hiding, was Moses still worried that the Pharaoh of Egypt was seeking his life? Was it because he murdered a taskmaster? I think not.

And when Moses did return to Egypt, he had the court of the pharaoh, whom I believe was Amenhotep II, living in fear of his words. His old royal training kicked in, and he had them living in awe of his very shadow. I think this is because he may have been recognized for who he had once been in those alabaster courts of the Royal House of Egypt.

As for the perplexity I have maintained over the Exodus event itself, perhaps we can best showcase the issue with an example: The bible mentions that there were 600,000 Hebrew men on foot, including their wives, children, elderly, cattle and other livestock. How long do you suppose it took an estimated 1.2 million Hebrew slaves, with no traveling experience, hauling families, small children and elderly grandparents, to traverse the ancient Egyptian and Arabian trade routes in such a way?

Indeed, if the essence of the tale has its basis in fact, it is a perplexing mystery. 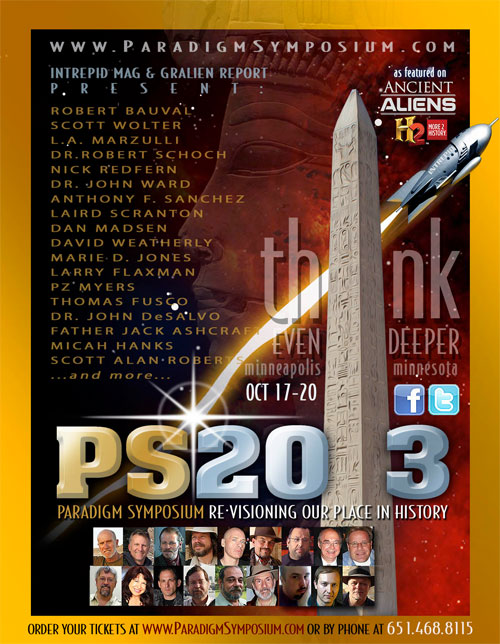