Over four centuries span the earliest known images of Giza and the present. At that early point depictions of Egypt were often prone to error and seldom first hand but their record is a useful one. Through these historic images we can plot the rediscovery of an ancient nation, looking at the details as they began to fill out over time. In part one below I’ll look at this period and the artistic platforms Giza’s image appeared in as it developed through to the 1700’s.

In part two I’ll look at the noted artists of the Orientalist, Pre-Raphaelite and Academicism art movements, who travelled to Giza in the 1800’s. These artists stood at Giza and stared, they recorded their gaze capturing the pyramids and Sphinx prior to excavation and deeply entrenched in huge drifts of sand. Many of their works may be familiar to you, likewise many earlier renderings too, but I hope I can introduce you to some new artists who have used their craft at Giza.

Our visual journey begins with the gold and bronze mosaics of St Mark’s Basilica in Rome. Finished in the late 13th century its domed atrium ceiling depicts many Old Testament scenes. (1) Among them Joseph standing before the pyramids with bales of wheat, a representation of the Christian myth that the pyramids served as storehouses for Pharaoh’s lean years. The artists who completed the mosaics were unknown, local and possibly worked from the Cotton Genesis manuscript, a 4-5th century Greek Illuminated manuscript copy of the Book of Genesis. Sadly this was damaged in a fire in 1731 leaving only 35 of its original 165 leaves.

Gates of Paradise, Florence Baptistery (1452) original and copy which now sits in its place.

The pyramid as biblical detail emerges again in the 15th century with Lorenzo Ghiberti’s gilded bronze doors from the Florence Baptistery. Michaelangelo named Ghiberti’s doors claiming they were worthy to be ‘The Gates of Paradise’. On panel no.3 they show Noah amidst a biblical flood scene, a large pyramid sits as the backdrop. Ghiberti was an early Italian Renaissance artist, a humanist, a collector of classical artefacts and a historian. His pyramid is also an ark rendered from the description of 2nd century Christian theologian Origen. It is not known to be a representation of Giza but this early resemblance on such an acclaimed work does make it worthy of note.

From gold and bronze Giza’s visual journey makes its way to woodcut printing through the cosmographers of the 16th Century. Cosmography was a science that attempted to describe the general features of the world or universe. Commissioned by the wealthy and noble they were prized possessions in early libraries. However, neither Sebastian Munster’s Cosmographia (1544) nor Andre de Thevet’s Cosmography of the Levant (1556) provided woodcuts with any sign of accuracy. This was in part due to the authors practice of using the work of other travellers. (2) Giza was yet to be depicted by someone who had been there themselves.

In the 16th century scholars were still disputing which monuments were the most marvellous, Giza’s place amongst the seven wonders was known but not fully realised. This is especially evident in Maerten van Heemskerck’s oil on canvas Panorama with the Abduction of Helen Amidst the Wonders of the Ancient World (1535) (4) where we can barely see the pyramids and his Seven Wonders woodcut series where they’re too narrow. 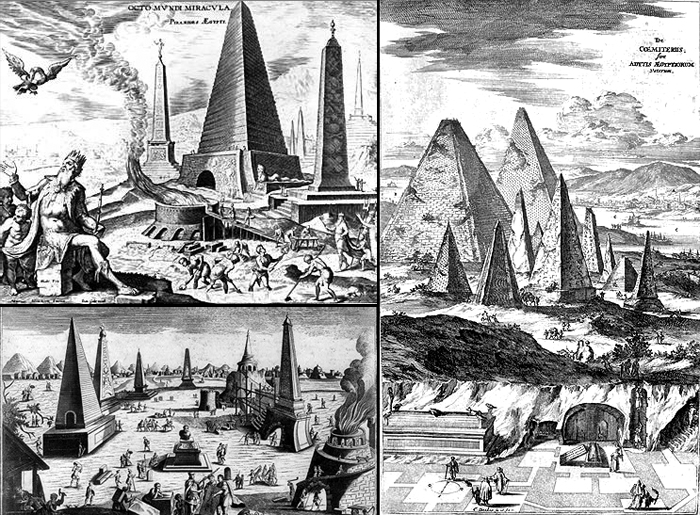 This narrowness was a direct influence from the Pyramid of Cestius, built in 12BC it is considered one of the best-preserved ancient buildings in Rome. It was a far easier site for the European traveller and inspired many visiting artists who established its proportions as typical of pyramids elsewhere.(5) Rome’s Athanasius Kircher (1601-1680) depicted this visual error in Sphinx Mystagoga (1676) but added elements from here-say such as camels, looters and pyramid climbers.

The quality of information passed from traveller to cosmographer to artist or woodcutter gave a cumulative error that remained in Giza’s visual record until the late 18th Century. This is particularly evident with the Sphinx, which is shown a number of times as female, with a range of hairstyles and in bust form up to its excavation in the early 19th century. (3)

By the 17th century, amidst these errors of interpretation and here-say, artists began to consider how pyramids were made. Antonio Tempesta (1555-1630), an Italian engraver, tackled the subject in his Seven Wonders etched print series, showing it far more courtesy than the slave depictions that were to follow. His Pyramids Under Construction (1608) shows a peaceful scene reminiscent of farming landscapes. Influenced by Dutch landscape painters Tempesta created a Giza easily familiar to western tastes, his construction techniques recognisable as farm labour.

Toward the mid 17th century John Greaves (1602-1652) an Oxford astronomy professor under the patronage of Archbishop Laud, visited Egypt with Edward Pocock, a professor of Arabic also from Oxford. Sent by Laud in his capacity as Chancellor of the University of Oxford Greaves was tasked to expand the university’s knowledge of Egypt. (6) The resulting work was Pyramidographia (1646) (7) and from its copper engraved plates the first cross-section of the Great Pyramid in western published print. A style of representation continued right through to the 3D animations of Jean-Pierre Houdin today. (8)

Later that century in 1681 Dutch artist and traveler Cornelis de Brujn (1652-1727) entered Egypt, possibly financed through intelligence work for the Dutch. (9) Egypt inspired De Bruijn to make drawings for scholars and he heavily invested into the publication of his work Travels in the Principal Parts of Asia Minor (1698). In it he gave a more accurate depiction of the Sphinx and an early glimpse into the Grand Gallery, recorded from his own visit. Unfortunately his engraver did not share his vision of the site and amended his pyramid proportions to the recognisable slope previously established.

Collectively the 17th century had a loose grasp of Giza, entering the mid 18th century things began to change. The Danish naval captain and explorer Frederick Ludvig Norden (1708-1742) was sent at the request of the King of Denmark to make drawings and observations of Egypt’s ancient monuments. Norden executed 200 ‘on the spot’ drawings during his travels in 1737-38 which were later published in the posthumous Voyage d’Egypte et de Nubie (1755). The work contained steel engraved plates depicting views, maps and plans and contained the most comprehensive visual record of Giza published at the time. (10)

The first noted works of art specifically depicting Giza were made by Hubert Robert (1733-1808) a French artist who moved to Rome in 1754. Staying for 11 years he sketched amidst romantic ruins in the company of other young artists and was given the moniker Robert des ruines. Robert never travelled to Giza but this did not in any way impede his vision of the site, his works Fantaisie Egyptienne (1760) and Pyramids (1765) captured in oil ‘the earliest fully realized Egyptian landscape’. These works were applauded in their time, are the forerunners to 19th century Orientalist depictions and have been exhibited in Paris, Rome, Copenhagen, America, Canada and Vienna. Pyramids is currently on display at Smith College Museum of Art, Northampton. (11) Fantaisie Egyptienne was sold at Christies in 1999 for $1.1 million and is unfortunately no longer on display. (12)

The years preceding the 19th century offered many notable visualisations of Giza, yet only a few were by those who’d been there. In 1796 The improved print technologies of lithography opened a profitable market in images of new places and cultures. This combined with the opening up of Egypt, via invasion and the new dynasty of Muhammad Ali, allowed 19th century artists access to the site. Visualising its enormity and majesty they found for themselves the aspects most appealing and their work at Giza is covered in the next section.

At the start of the 19th century painting at Giza was not an easy calling for an artist, the passage was lengthy and the land unknown. On arrival some took the protection of their invading army while others enjoyed the assurances of diplomatic or royal patronage. By the mid 19th century adventurous artists such as David Roberts, Carl Haag and Frank Dillon safeguarded themselves by learning Egyptian custom and practices, many traveled and camped with Bedouin sharing trusted contacts and guides. Though artists were in danger, especially for undertaking portraiture in public areas, they were more likely to suffer a health problem; Frederick Goodall was dismissively thrown from his donkey by a caravan of camels near Cairo and Thomas Seddon died of dysentery on his second visit. To support each other a number of artists chose to travel or live together and subsequently a great number of them knew each other very well. According to William Holman Hunt in 1854 artists were so commonplace they ruined his vision of Cairo. Towards the end of the 19th century Egypt opened up through steam and rail and a more leisurely adventure awaited the likes of Ivan Aivazovsky and Elihu Vedder. The earlier 19th century artists had captured a period of transition at Giza and beyond. Their images not only presented an open landscape, swallowed up later by modernity, they also showed where the dust settled when Ancient Egypt fell to slumber.

Shown below are some of the more noted artists who traveled to Giza in the 19th century, a sample of the works inspired by their visits and where possible their own recollections of their time there. In the notes you can find reference to where these works are now and their value among art collectors worldwide.

A copy of Description de l’Egypte, 23 volumes with mahogany display case, will be auctioned by Christies in May 2011

Napoleon and the scientific expedition to Egypt – Linda Hall Library 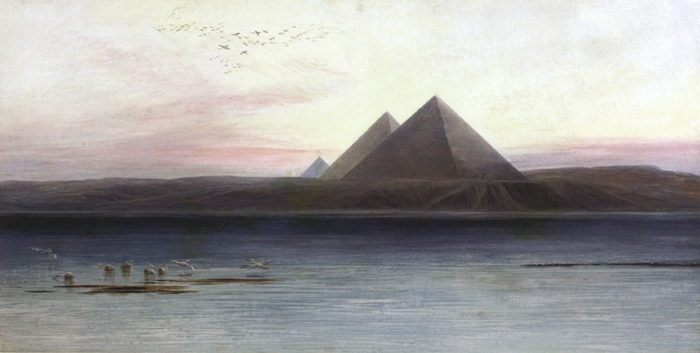 Pyramids of Gizeh – Sunset Afterglow is on display at Legion of Honor, Fine Arts Museum 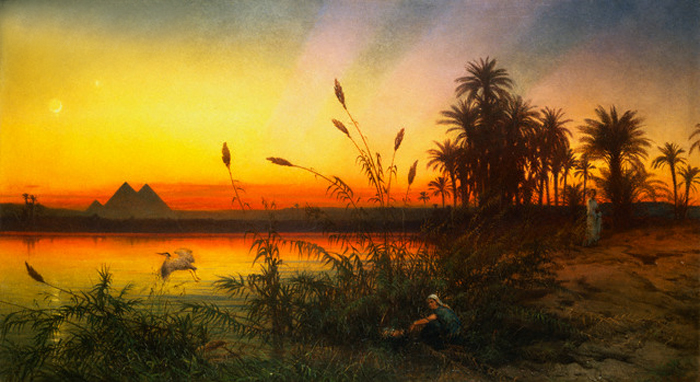 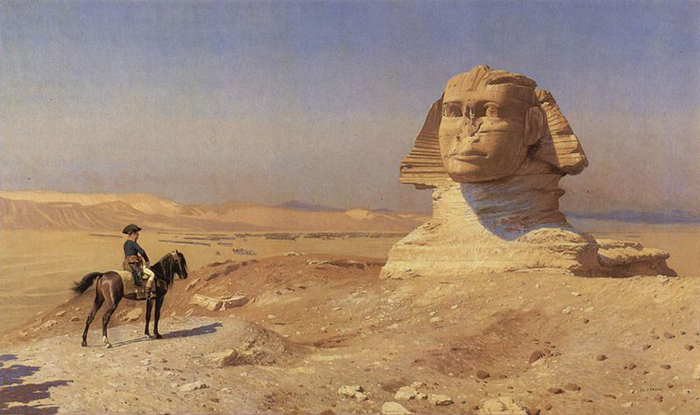 Carl Haag’s account of painting in the desert – An Artists perils in the East, a chat with Mr Carl Haag 16th March 1899 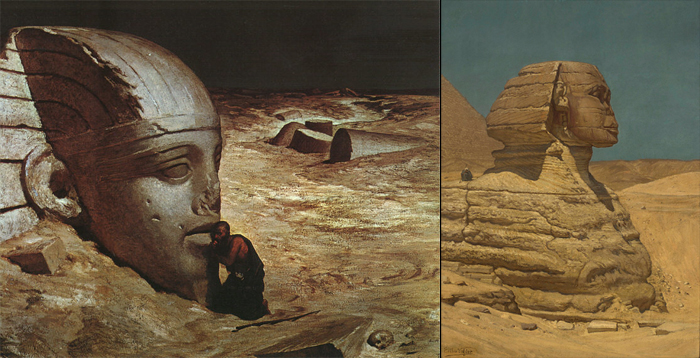 Elihu Vedder’s account of his time at Giza – The digressions of V. by Elihu Vedder page 451-2

The Questioner of the Sphinx (1863) is in the collection of the Museum of Fine Arts, Boston

The Questioner of the Sphinx (1890) is in the collection of Worcester Art Museum, Massachusetts

The Sphinx (1890) is in the collection of Pennsylvania Academy of the Fine Arts, Philadelphia

(1) Mosaics in the atrium of Saint Mark’s Basilica in Venice – qantara
(2) Andre de Thevet’s biography by Elsa Conrad
(3) By Brush and Lens: Revealing the Sphinx by Elaine Evans and Frank McClung is an excellent paper looking at image reproduction available at The University of Tennessee
(4) Panorama with the Abduction of Helen Amidst the Wonders of the Ancient World is on permanent display at The Walters Art Museum. A large high res image can be viewed here
(5) The error of the incline of the Great Pyramid is also attributed to Symon Simeonis’s 1323 account
(6) Intersections, The Travel Notebooks of John Greaves by Zur Shalev pages 77 – 100
(7) A first edition of Pyramidographia was sold in 2009 at Christies for $4,750 – Lot no.179
(8) A list of historic Great Pyramid cross sections from John Greaves to J H Cole by Chris Tedder
(9) Dutch historian Jona Lendering provides a detailed look at Cornelis de Bruijn’s travels including his experience inside the Great Pyramid at www.livius.org
(10) Frederick Ludvig Norden’s drawings from The antiquities, natural history, ruins, and other curiosities of Egypt, Nubia and Thebes can be viewed in their entirety at www.digitalgallery.nypl.org – enter ‘Norden Egypt’
(11) Hubert Robert’s Pyramids – Smith College Museum of Art Database
(12) Hubert Robert’s Fantaisie Egyptienne was sold in 1999 at Christies to an anonymous phone bidder for $1,102,500 – Lot no.41