The Hoover Dam hides an intriguing secret connecting sky to ground and past to present, using very much the same “as above, so below” system of measuring time deployed at Giza around the Great Pyramid of Egypt.

To learn more, take a read of this intriguing article by Wally Motloch.

Located on the Nevada side of the Hoover Dam is an awesome monument dedicated to over 100 workers who lost their lives to the construction of the huge machine known as the Hoover Dam and Power Plant.

Visitors are impressed by the two huge sculptures and the beauty of the base with inscriptions, but only few will notice that the monument sits atop a floor designed to look like a celestial map.

This celestial map is embedded in terrazzo floor around the monument. It is a beautifully executed representation of the night sky for a specific day and time and it includes many decorative features, astronomical markings and curious labels.

Back in 1930s, when this floor was designed, only an astronomer could have made sense of this information; but today, thanks to computers and applications like Stellarium, this knowledge is available to the average person who desires and determines to learn.

Aligning structures to constellations or cardinal points was common in the past. Hancock readers see that the Egyptian pyramids are good examples of this.

What is unique about the Hoover Dam sky map is the beauty of the design and precision employed by its creator, Oskar J.W. Hansen.

According to Hansen, the reason for this monument and star map is –

“to preserve for future generations the date on which President Franklin D. Roosevelt dedicated the dam and the power plant.”

Hansen encoded information in his terrazzo floor masterpiece that relates to and preserves a very specific place and moment in time:

But how did he do it?

I must preface this discussion by mentioning that I am not an astronomer. I invite the ideas and/or corrections of others to enrich this exploration.

The best way to start this discussion is to encourage you to download and examine the following material:

Also see instructions at the end of this article for setting up Stellarium.

For those unfamiliar with the precession of the equinoxes, the phenomenon results from the “wobble” of the Earth’s axis, due mainly to the mass of the Moon (see Fig. 5).

The inclination of axis of rotation to our sun (ecliptic plane) as well as the wobble and nutation affects the Earth. An observer on the surface of the spinning Earth looking east at sunrise would see different stars rising at different times, the result being that over 25,920 years, the entire circle of the 12 constellations of the Zodiac will successively appear on the horizon at very predictable intervals. Approximately every 2,150 years (25,920 /12), a new constellation will rise.

The second place to look is north, to see the Pole Star, a different face on our clock. Were we to attach a powerful laser to the axis of the Earth’s rotation, it would trace a giant circle on the celestial sphere. Stars which are on or near this circle successively become “pole stars” over a period of approximately 26,000 years. Currently, in the Northern Hemisphere, Polaris is the north star, but in 12,000 years, the axis will point to Vega.

As you can see, we have two ways to read time on our giant clock of 26,000 years. One way is to look NORTH at the circumpolar region to see which star the Pole Star is; or, we can look EAST during sunrise on the spring equinox to see which constellation is rising.

One complete axial rotation of Earth’s axis is called a Platonic Year. This very slow movement of constellations and pole stars has been measured by astronomers as being 1° arc for every 72 years. Therefore, 1 Platonic Year equals 360° x 72 years, or 25,920 years.

This very slow progression of 1° in 72 years has been immortalised in ancient lore, legends and literature. We see references to celestial numbers like 72, 108 (72 plus half of 72), and 43,200 (which is number of seconds in 12 hours: 12x 60x 60) and ratios, fractions and multiples of these numbers repeated in ancient literature, architecture, the Bible and myths from all over the world.

We see 72 co-conspirators against Osiris in the drama of Osiris, Isis and Set; in Exodus 14:19-21, each of the three verses consists of 72 Hebrew letters; the Catholic Bible is made up of 72 books; and the designers of the Great pyramid used the ratio of 1/43,200 for the perimeter of the base to the Earth’s circumference at the equator.

Various past cultures were able to measure these celestial motions, but only to the accuracy of whole numbers like 72.

Also, we now know that orbits are ovular and each planet’s mass and gravity speeds up or down, so the Earth’s wobble changes from year to year.

Given the aid of modern telescopes in outer space, very precise atomic clocks and the precision of computers, we see that planetary motions are not that consistent and do change over time. The length of a Platonic Year will continue to vary because of the uneven orbital distances and gravity of the Moon and Planes. As our equipment and the skill of astronomers improve, we will fine-tune this number by adding digits after the decimal point. Today, astronomers use 25,782.34 Julian years to 1 Platonic Year.

Hansen refers to this in his floor diagram (Fig. 5):

“The average length of a complete sidereal revolution is 25,694.8 tropical years, but may differ from the mean time of revolution by 281.2 years.”

Let us return to our monument, to which Hansen devoted over five years of his life and see how he encoded the chronological information.

Below is an image of the overall view of the Monument Plaza previously known as the Safety Island. 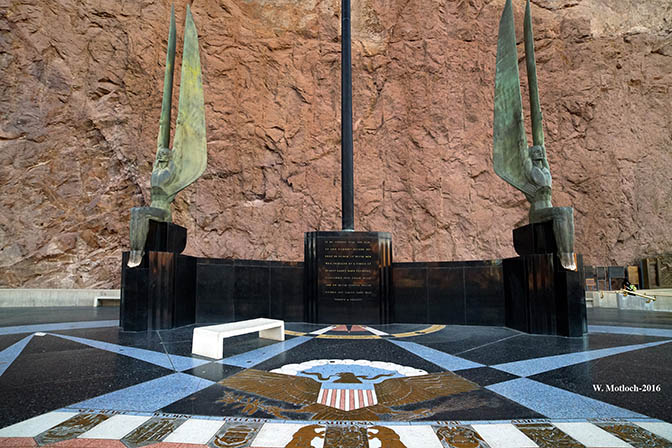 Fig.1 Front View of the Memorial Monument at Hoover Dam. 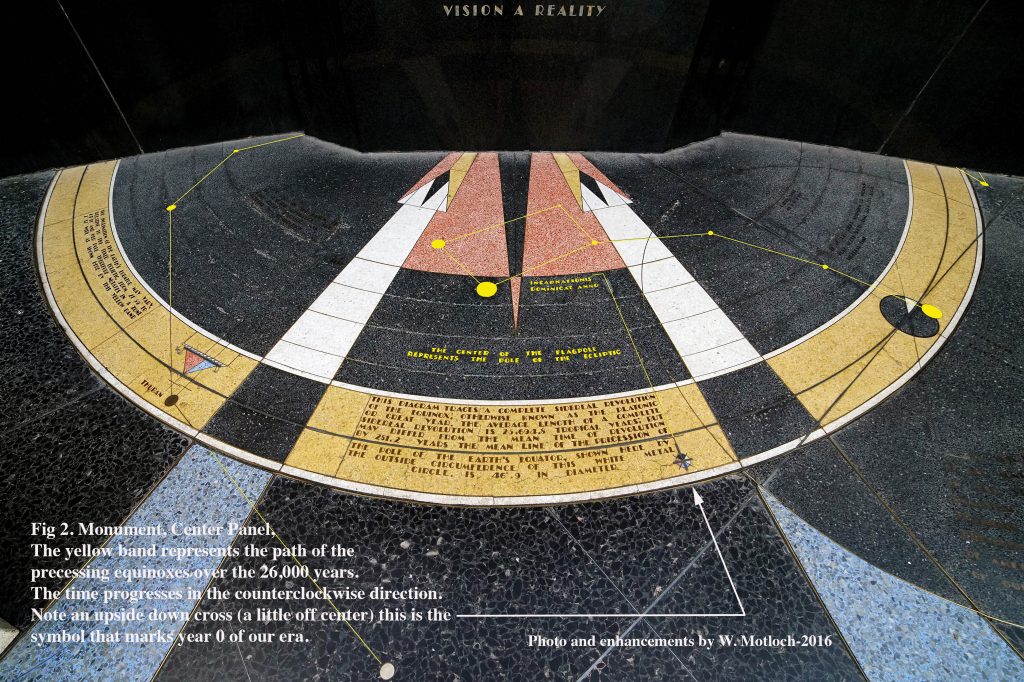 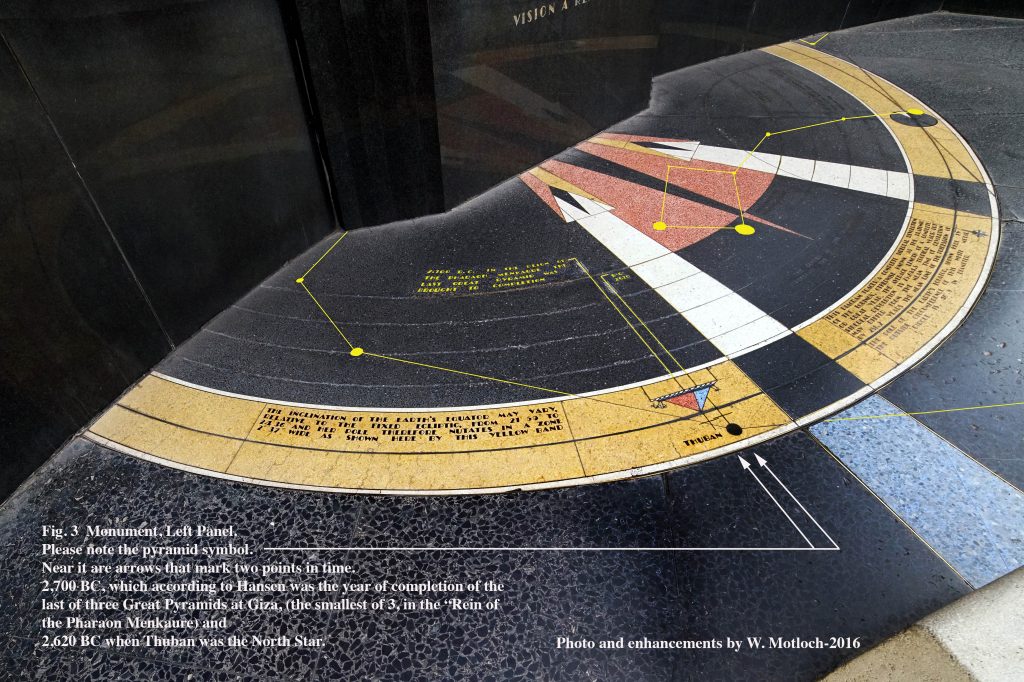 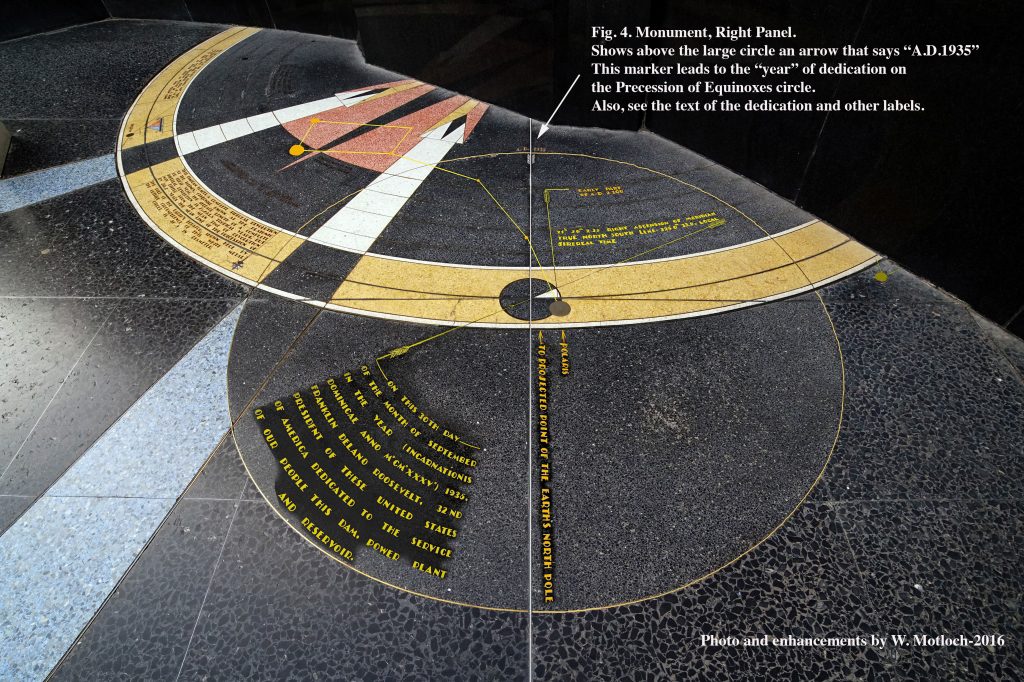 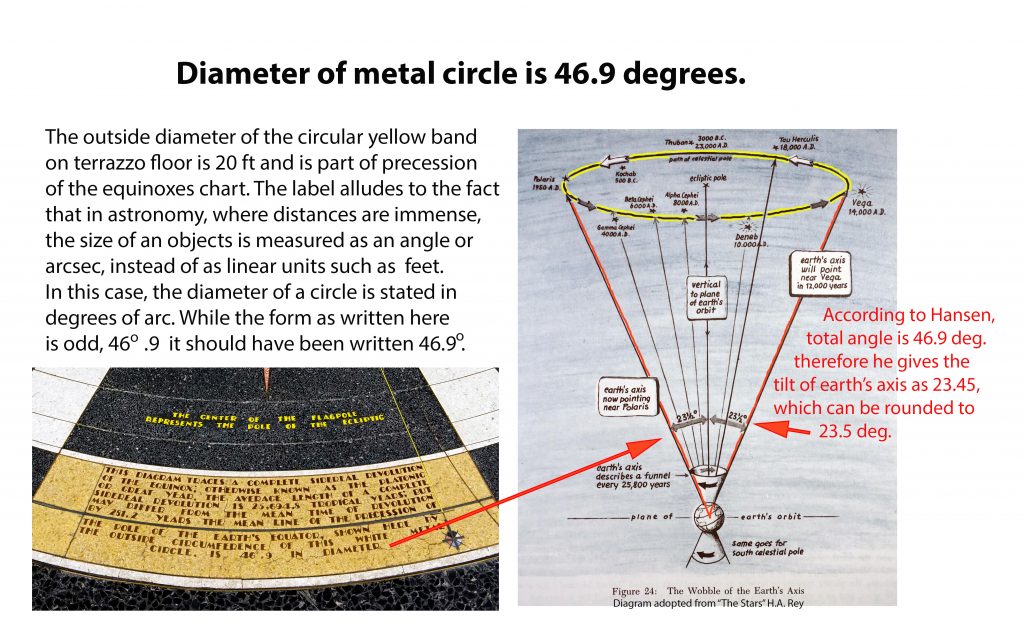 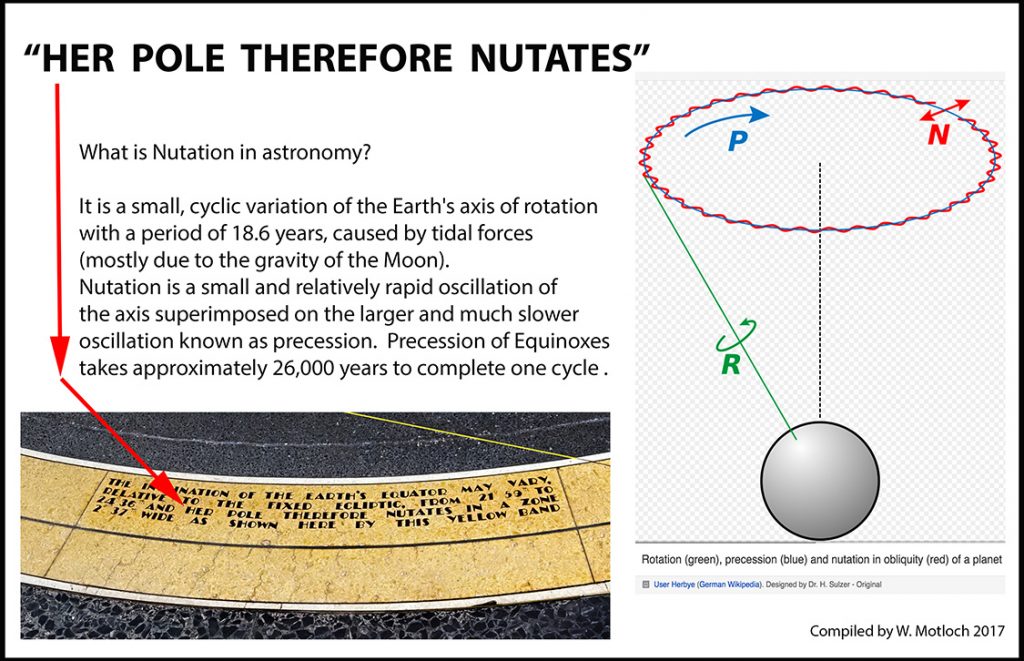 Not only does the Earth’s axis wobble but it also vibrates (nutates); see the red line on the diagram and the yellow band on the floor.

The terrazzo floor is mesmerisingly detailed, albeit puzzling. Hansen was not a trained astronomer but an artist, as well as a sailor and world traveler, who could navigate by the stars. In the early 1900s, Hansen circumnavigated the Earth and spent time in Egypt. This explains his multiple referencing of Egypt and the night sky in the terrazzo floor.

“Man’s control over natural forces has grown in proportion to his increasing knowledge of the true nature of the Universe of which we are a part…Time, the intangible governor of all our acts, is measured to us by the external relations of our Earth to other worlds. Therefore, I thought it fitting to have the base of the monument rise from a finely wrought, marble terrazzo star map of the northern regions of the sky.

“The designer of the star chart…placed the bodies of our solar system in the terrazzo, correct to the minutest fraction of an inch in scale of the design. One versed in the abstruse mathematics of astronomy may calculate the precession of the Pole Star for the next 14,000 years by studying the design of the star chart. Conversely, future generations may look upon this monument and determine – if no other means are available – the exact date on which engineers and craftsmen of our generation completed this giant structure”.

It is likely that Hansen chose the time of 21:30 for the time of dedication because the stars are not visible at 11:00 AM when the President spoke.

Let’s see if we can locate this information in the architectural design of the monument. 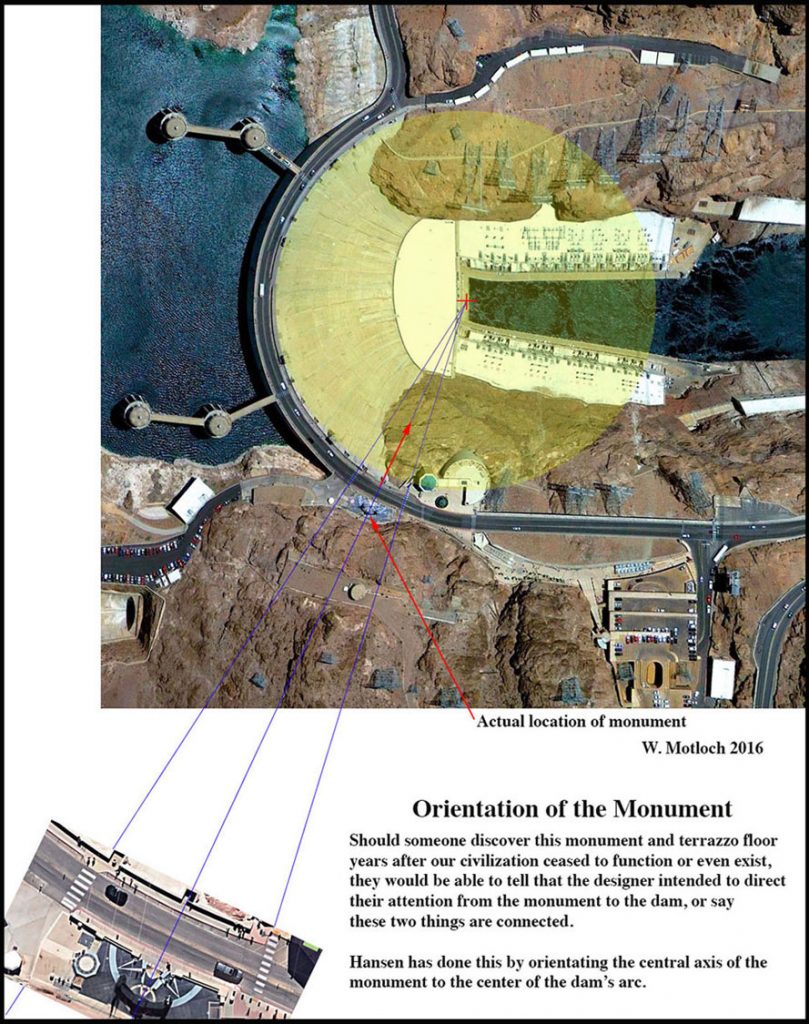 Fig. 7.Orientation of Monument indicates direction and connection to a place, in this case it is the dam.

Hansen used the precession of the equinoxes circle as a clock face, or a time diagram (Fig. 8); the arrow pointing to a spot on the yellow rim labelled “A.D. 1935” marks the starting point of our era (year 0) and year 1935, (Fig. 9) indicating how much time has elapsed on the 26,000 year clock. 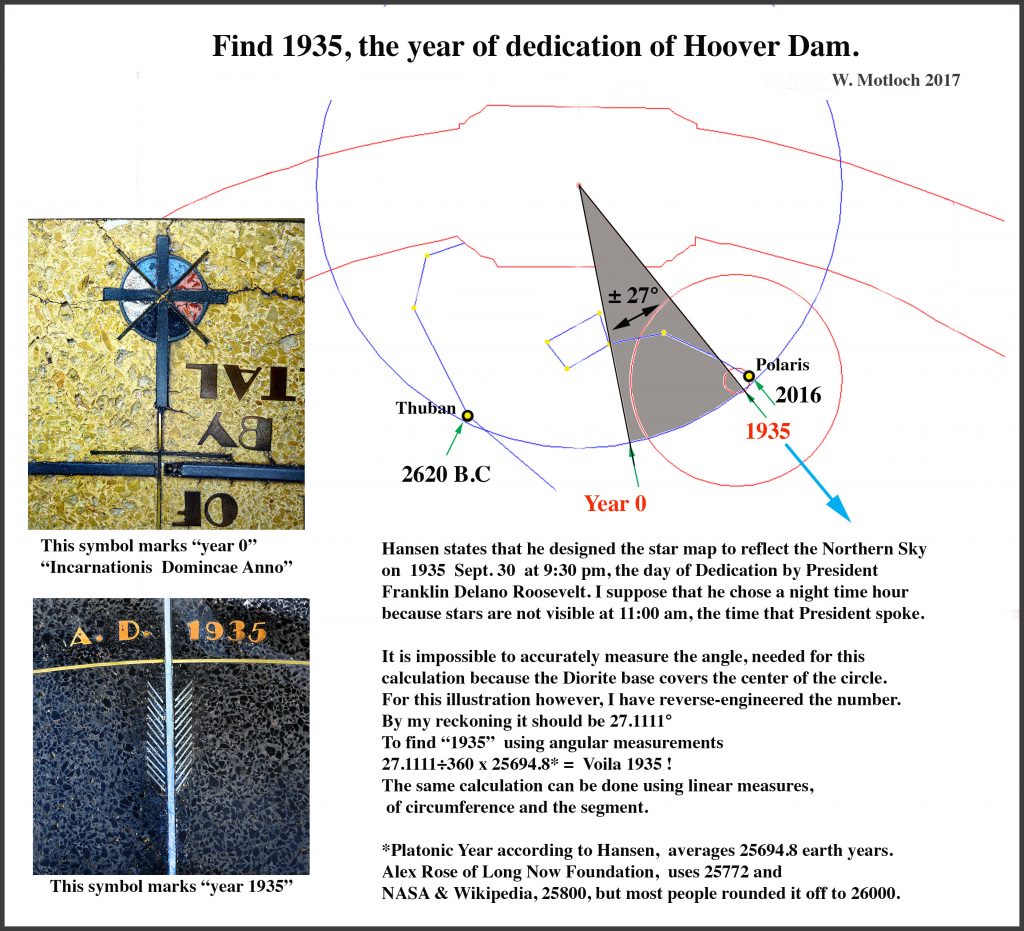 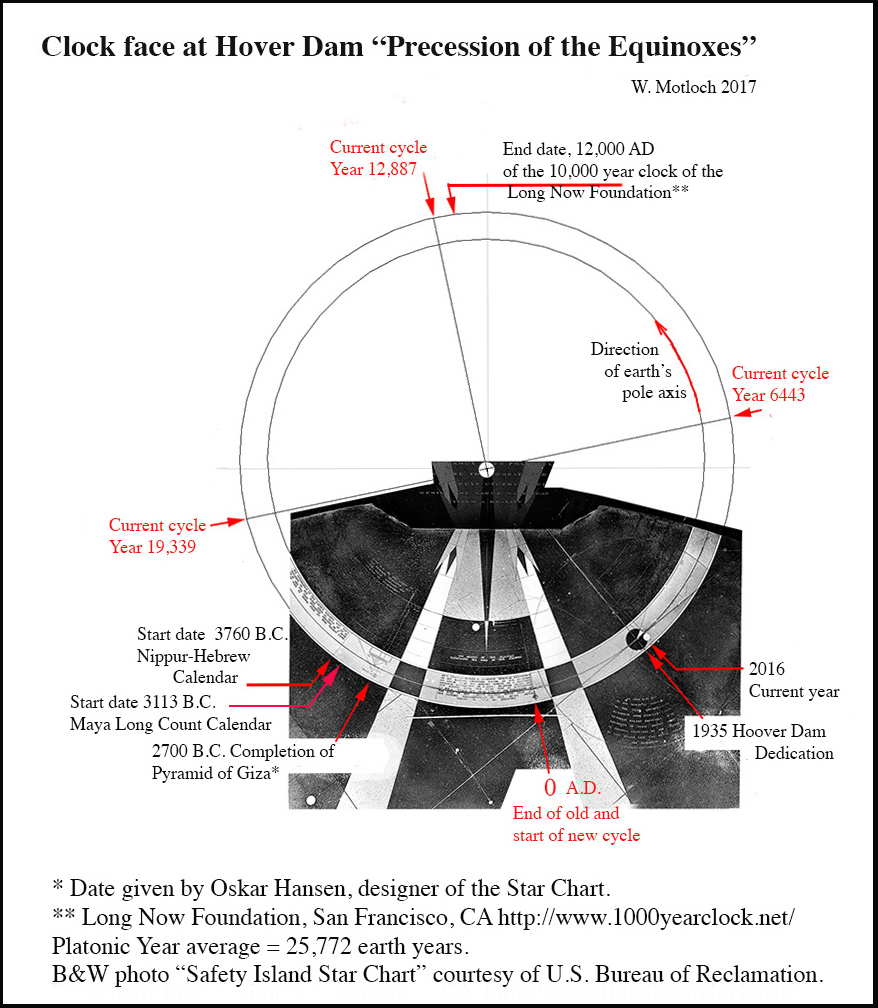 Fig. 9. Top view of the Precession of the Equinoxes Circle.

Markings on the outside of the circle show events from the past and future as these would appear on a diagram with a 26,000 year scale. The lower part is a black and white photo of the floor, supplied by the U.S. Department of Reclamation.

Considering it takes 28 days for the Moon to orbit the Earth, 88 days for Mercury to orbit the Sun, and 4,330.6 days for Jupiter to orbit the Sun, the location of the Moon in the sky would be a good indicator for the days of the month. Jupiter and Mercury would indicate which month of the year is involved. The orbit of the planets Mercury and Jupiter point to the month of September and the orbit of the Moon points to day 30 (see Figs 10,11,12,13 and 14). The star map is very detailed and precise. When we compare the image of the sky from Stellarium with that of the draftsman, and the floor, the angles are correct. One can see plainly that the Moon, Mercury and Jupiter are perfectly aligned to September 30 in the year of 1935: the proof is in the floor. 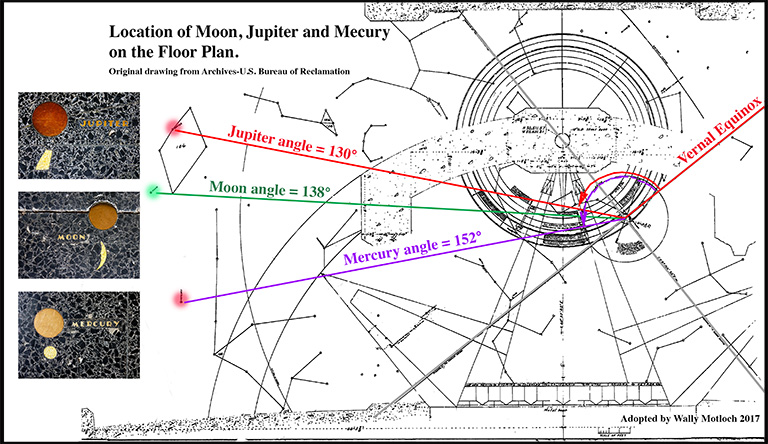 Fig. 10. Location of the Moon, Jupiter and Mercury on the floor.

Here you can see the floor plan and photos of each symbol. Photos of floor images are placed beside each celestial body as they are on the floor plan. 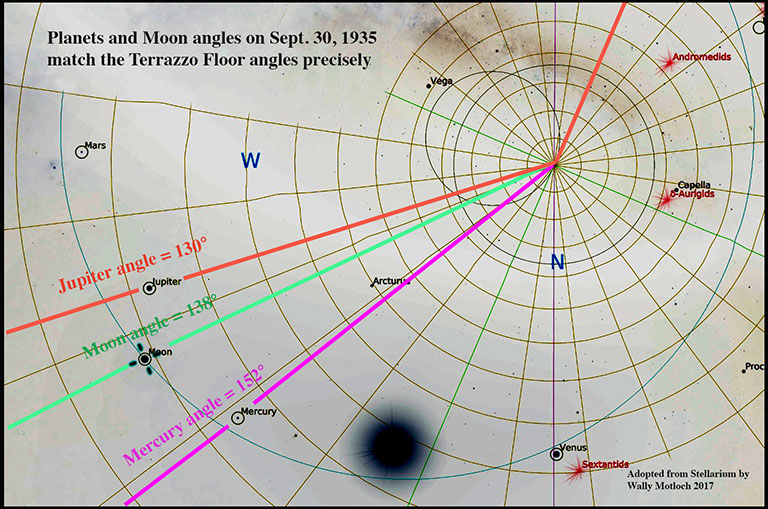 Note my colored lines to each planet and the Moon. Compare the angle of each body with the vernal equinox line on the floor to that of the computer screen (Fig. 11). 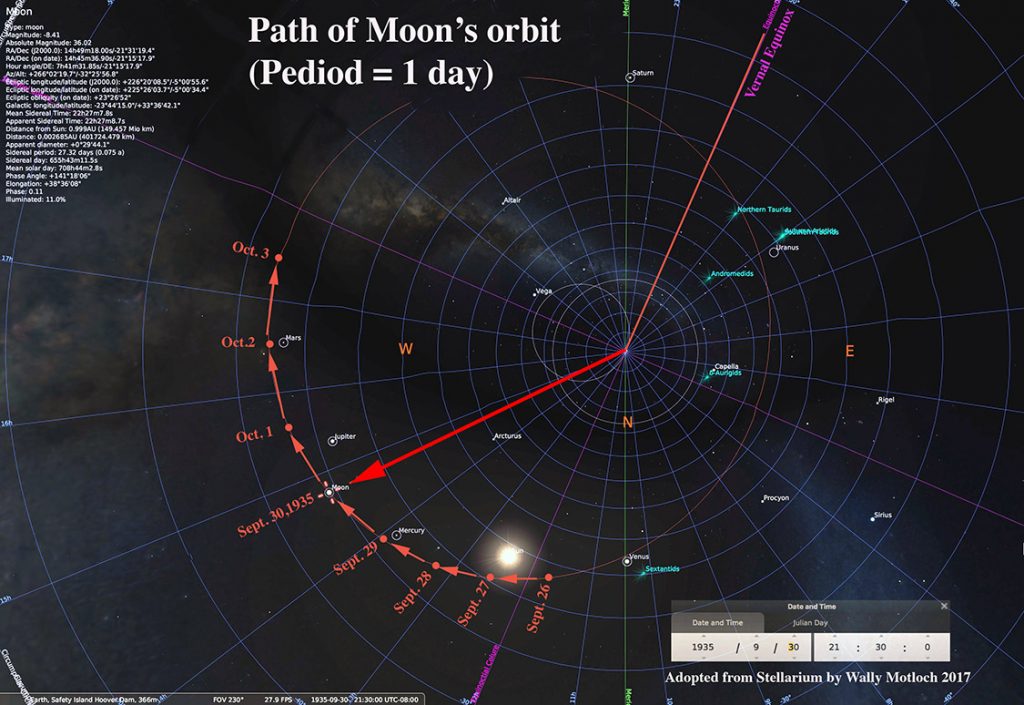 Note that the position of the Moon on the floor ONLY fits the date of September 30th as shown here. 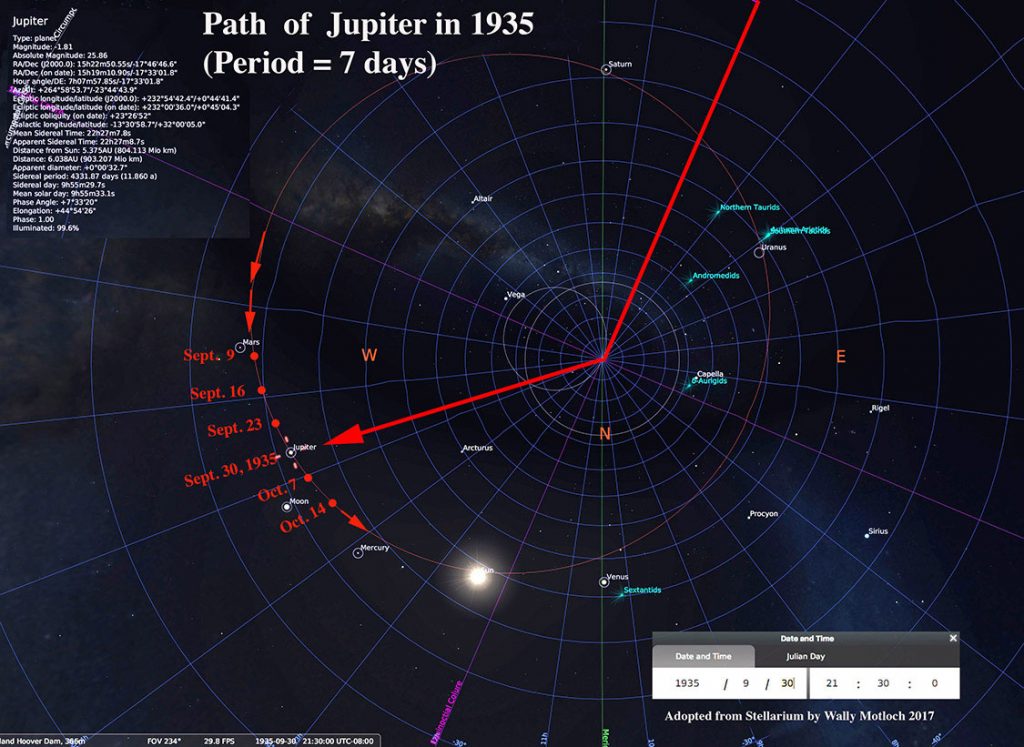 Note that the position of Jupiter on the floor also ONLY fits the date of September 30th. 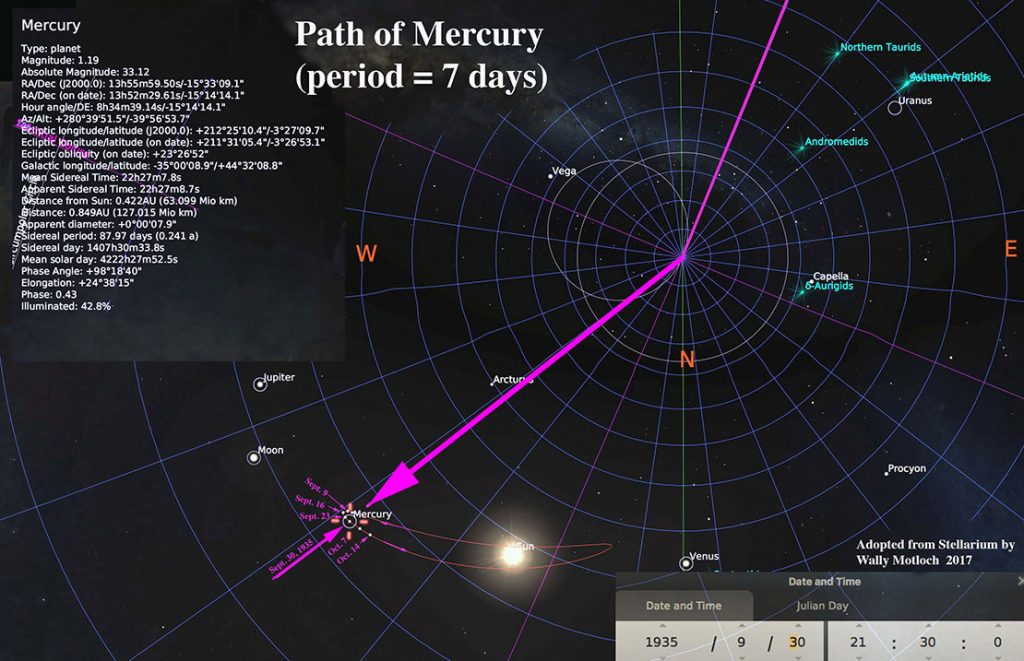 Note that the position of Mercury on the floor ONLY fits the date of September 30 on this chart.

Since the Earth spins on its axis every 24 hours, all we have to do is look at the circumpolar region of the sky in Stellarium, to see how wonderfully the stars seem to spin around Polaris. Compare this with the design on the floor and you’ll see that the match is astonishingly accurate. The Ursa Minor constellation with Polaris is positioned exactly where it needs to be to indicate the right time. Start with a 24 hour clock, align the 0 hour to the autumnal equinox line and your clock will read 20:30. Add 1 hour for Daylight Saving Time. 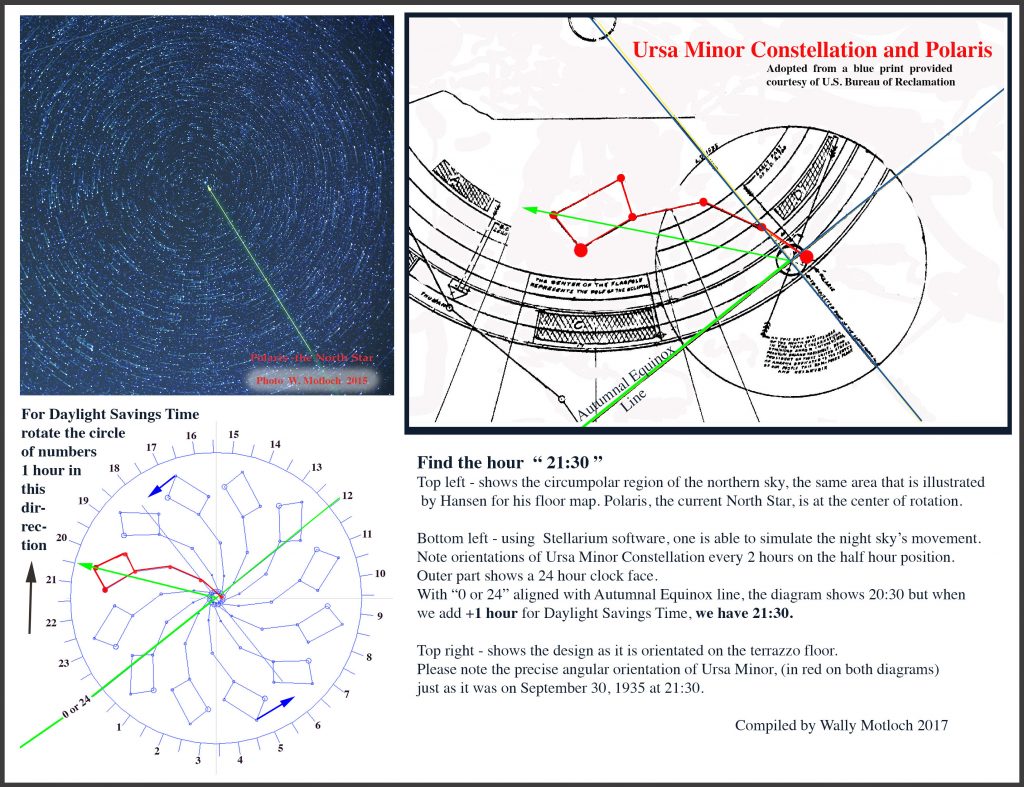 In conclusion, the evidence clearly indicates that the date and time of dedication is encoded in the monument’s floor. There is, therefore, no doubt in one’s mind while looking down at the terrazzo floor glistening with 209 metal disks or looking up at one’s computer’s screen running Stellarium (set to September 30, 1935 at 21:30) that we can confidently say,

“as above, so below”

Oskar Hansen was a genius!

The author welcomes emails from enquiring minds at: wallymotloch@yahoo.com

James B. The Ever-Changing Sky, A Guide to the Celestial Sphere, Cambridge University Press.

Berman, Bob. Secrets of the Night Sky. The Most Amazing Things in the Universe you can see with the Naked Eye, HarperPerennial Publishers.

Seaman, Rob. The Meaning of a Day

In the lower panel:-

In the side panel:-

Add it as a new Location,

N.B. Keep verifying your settings because the program has the nasty habit of changing them while you’re not looking!