In the otherwise excellent Magicians of the Gods, a significant error exists that can use attention. By kind invitation of the author this article aims to expand and detail this claim.

Specifically, while the text of Figure 59 makes mathematical sense, the illustration taken as a whole does not. 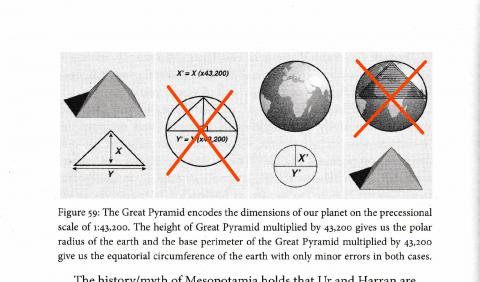 This diagram scanned from Magicians of the Gods does not depict the correct proportions of the Great Pyramid with respect to a globe. Incorrect parts are crossed out in red.

First a few facts presented as uncontroversial. The Great Pyramid stands H = 280 cubits (builder cubits) high and B = 440 cubits along each side.

If this height were to be interpreted as the radius of a circle, the circumference of that circle would be

Note that the sum of all four sides of the Great Pyramid also equals this value.

Further note the Great Pyramid has a base/height ratio of pi/2.

Multiplying these values by the constant scale factor K = 43200 gives a remarkably good approximation to the physical dimensions of our planet. This observation is of course spelled out in the text that accompanies Figure 59 and thus is also presented as relatively uncontroversial.

However in the illustration of Figure 59 one side of a pyramid is shown, inscribed in a circle in which the height equals a radius (X) and the base equals a diameter (Y). This is a trivial identification since Y = 2X always for every circle. And since there are four sides per pyramid, the entire perimeter would be eight times the radius.

No doubt the builders could have created any of these alternatives had they so chosen. They had to make choices about how best to model a globe, about how to encode specific physical data using the specifications of the Great Pyramid they were to actualize.

Modeled to first order as a sphere with uniform radius, only one variable – that radius – needs encoding for later retrieval.

A pyramid offers two immediate physical measurements to encode information, base (side) and height. Used to model a scaled sphere, either variable – height or base – could be used.

Instead the builders took a more difficult path, since the actual Great Pyramid would be harder to build than a Figure 59 pyramid. All things equal, therefore, had it been an option to the builders, they could have and would have chosen it. They did not.

By building up, taking the difficult path, they could encode the radius using both the base and the height. This improves transmission efficiency with “magicians” yet to come, as the encoded variable can be duplicated, scaled accordingly, into both pyramid variables. 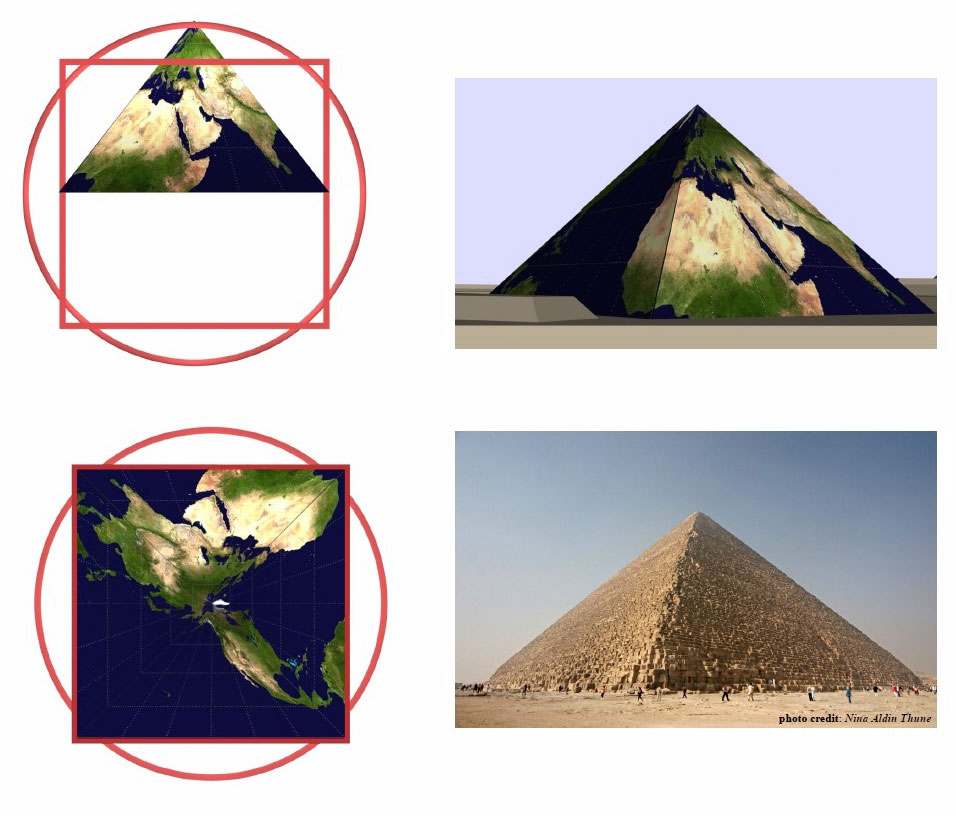 The correct proportions of the Great Pyramid with the Northern Hemisphere mapped to its surface. This unique proportion “circles the square” in three dimensions. ©Keenan. Source: www.birthday-pi.com

Using whatever method is convenient later, measuring either the height or the base would allow the magician to extract the desired value. Measuring both allows cross-referencing.

In addition, understanding the unnecessary difficulty makes the globe modelling even more obvious. This was not a coincidental choice.

In conclusion, the builders had good reasons for their decision. Those reasons – knowing the structure as it was meant to be – is the best motive for highlighting the issue with Figure 59, and making a request to correct it.

It mattered to the builders so it should matter to us.

Doug Keenan was born in Indiana and received his degree in electrical engineering from the Rose-Hulman Institute of Technology. For more than twenty years he enjoyed a career in the consumer electronics field and holds several patents including the multi-brand universal remote control. A computer programmer, botanist and entrepreneur, his work now focuses on pyramids.

6 thoughts on “Fixing Figure 59: The Great Pyramid Models the Earth”