This article is to try to make sense of a puzzling statement of Aristotle (384-322 BCE) that links Jews with India. This statement is recalled in a fragment by Aristotle’s pupil Clearchus who traveled widely and whose inscription on a tomb of a friend is preserved in the Afghan city of Ai-Khanoum.

The Jewish scholar Flavius Josephus (37 – 100 CE) quotes from Clearchus’s fragment in his Contra Apionem [Against Apion], which has Aristotle say: “Jews are derived from the Indian philosophers; they are named by the Indians Calami, and by the Syrians Judaei, and took their name from the country they inhabit, which is called Judea.” (Book I:22) [1]

I can think of two places that might have been the Calami of Aristotle. The first candidate is the famous port city of Kollam, in Kerala, which was well known to the Phoenicians and Romans, and the second is the ancient city of Kalyani or Kalyan, in Karnataka, which was to later become the capital of one branch of the Chalukya Empire. The second city, which has recently been renamed Basavakalyan, appears to be the older of the two.

The interaction between India and the West during the first millennium BCE is well known as in the mention in Old Testament of trade for ivory, apes and peacocks (1 Kings 10:22). There was thriving bilateral trade between India and Rome both through the overland caravan route and the southern sea route. By the time of Augustus 120 ships set sail every year from Myos Hormos to India. Pliny complains in Historia Naturae 12.41.84, “India, China and the Arabian Peninsula take one hundred million sesterces from our empire per annum at a conservative estimate: that is what our luxuries and women cost us.” 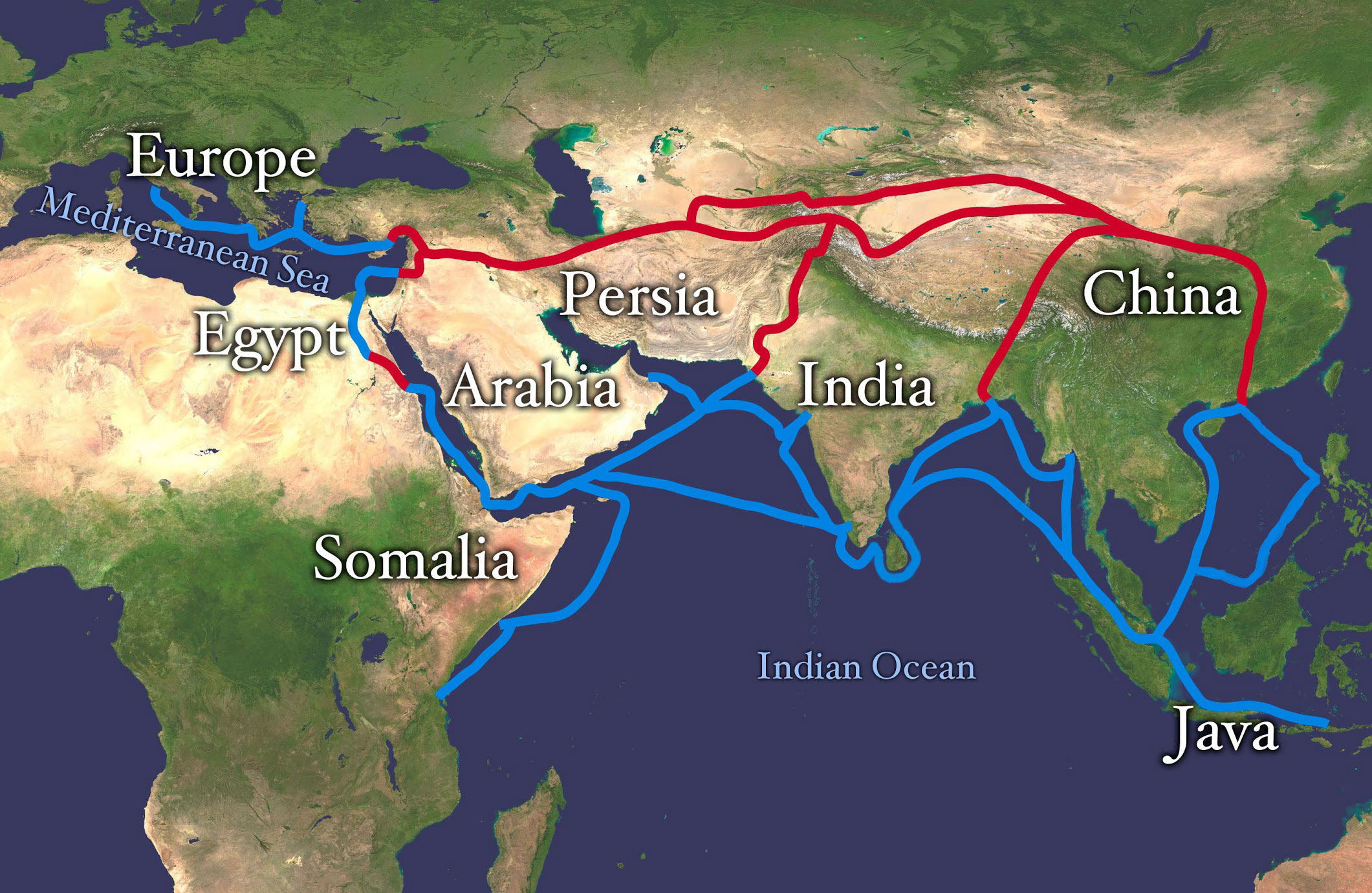 India and the West had rich interaction in the second millennium BCE also. This was the time of the Mitanni of Syria, who worshiped Vedic gods. The Mitanni ruled northern Mesopotamia (including Syria) for about 300 years, starting 1600 BCE, out of their capital of Vasukhani. In a treaty between the Hittites and the Mitanni, Indic deities Mitra, Varuṇa, Indra, and Nāsatya (Aśvins) are invoked. Their chief festival was the celebration of viṣuva (solstice) very much like in India. It is not only the kings who had Sanskrit names; a large number of other Sanskrit names have also been unearthed in the records from the area. 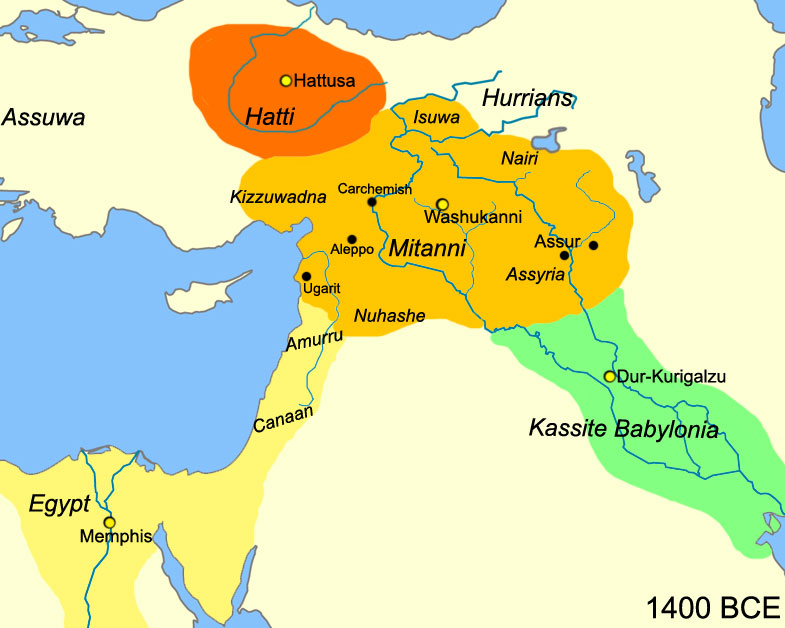 The list of the Sanskrit names used in Syria and elsewhere was published by P. E. Dumont of the Johns Hopkins University, in the Journal of American Oriental Society in 1947, and one may see a summary of that in my own book chapter on Akhenaten, Sūrya, and the Ṛgveda, which is available here. [2] The names of the main kings are (with the standard Sanskrit form or meaning inside brackets): The first Mitanni king was Sutarna I (good Sun). He was followed by Baratarna I (Paratarṇa, great Sun); Paraśukṣatra (ruler with axe); Saustatar (Saukṣatra, son of Sukṣatra, the good ruler); Paratarṇa II; Artadama (Ṛtadhāman, abiding in cosmic law); Sutarṇa II; Tushratta (Daśaratha or Tveṣaratha, having ten or fast chariots); and finally Matiwazza (Mativāja, whose wealth is thought), during whose lifetime the Mitanni state became a vassal to Assyria.

It is most interesting that the Mitannis were connected by marriage across several generations to the Egyptian 18th dynasty to which Pharaoh Akhenaten (ruled 1352-1336 BCE according to the mainstream view) belonged. Akhenaten’s second wife was Tadukhipa (“khipa” from the Sanskrit “kṣipā,” night) and she became famous as the queen Kiya (short for Khipa). His first wife was the beautiful Nefertiti, whose bust is available in a museum in Berlin. 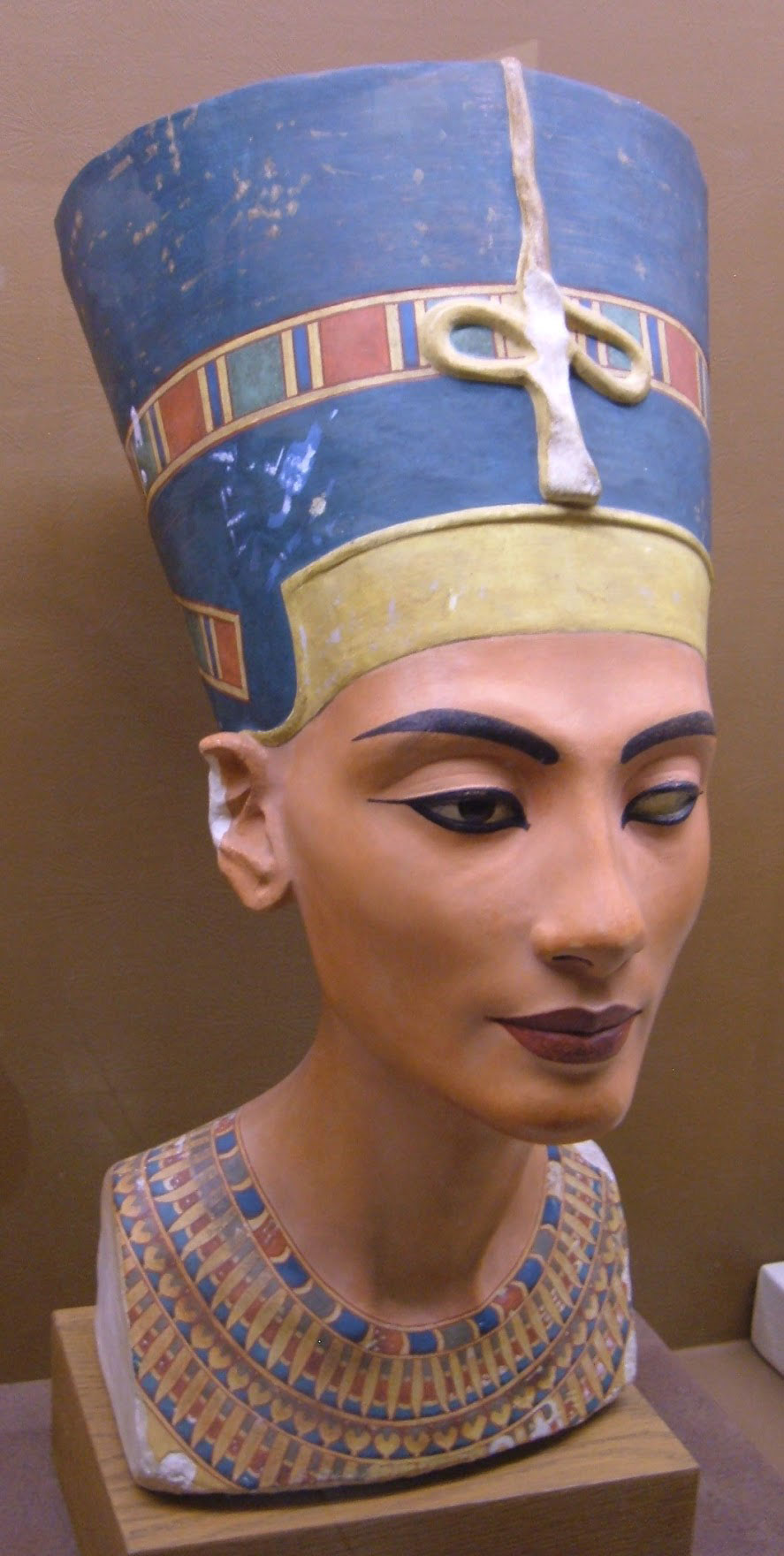 Replica bust of Nertiti in the Berlin Museum. CC BY-SA 3.0

Akhenaten (“glory of the Aten”) changed his name to honour Aten (“One god” represented as the solar disk) in his sixth year of rule. Many see Akhenaten as the originator of monotheism by his banishment of all deities except for his chosen one. He has been seen as a precursor to the Old Testament prophets, and thus to the Abrahamic religions. Some Biblical scholars see his Hymn to Aten as the original Psalm 104 of the Old Testament [3]. 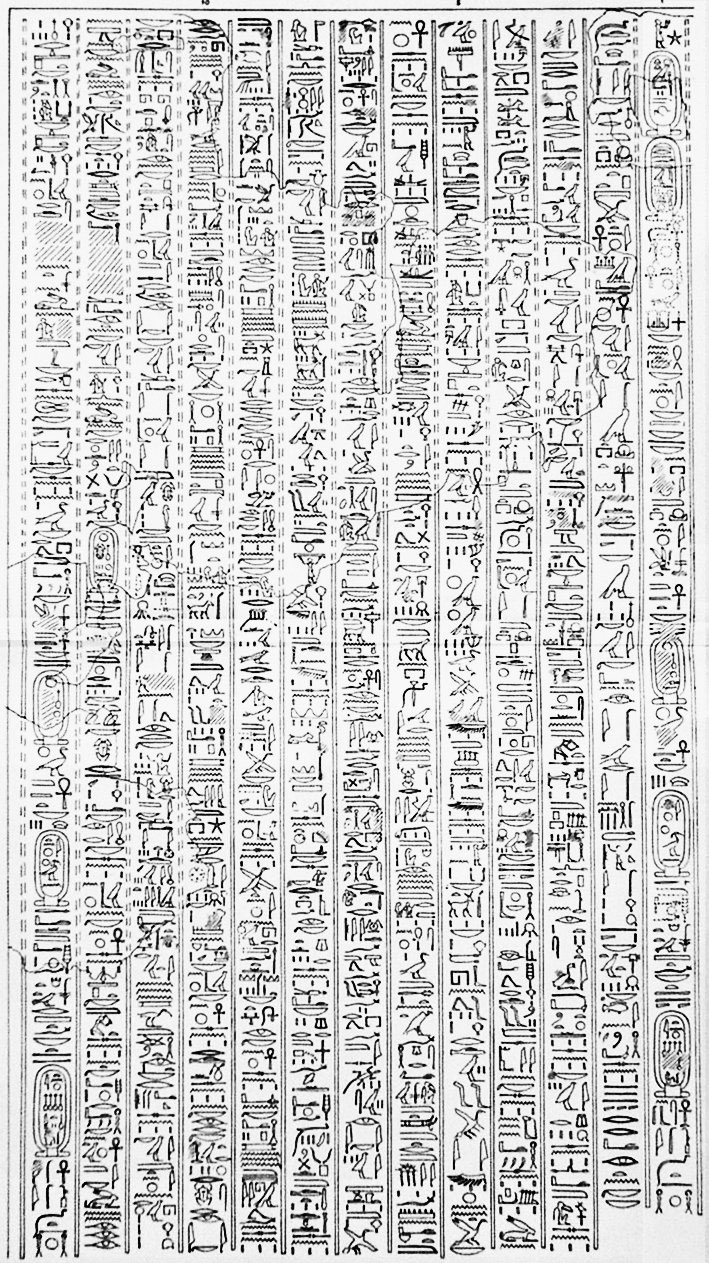 The other possibility is that Akhenaten’s worship of Aten is derived from the Vedic system through the three generations of queens in his family that were from the Mitanni. There are parallels between his hymn and the Sūrya hymns of the Ṛgveda. For example, in both the Sun has absolute power over the lives of animals and men and it provides natural bounties while also residing in the heart of the poet. Note also that Agni is praised as Yahvah in the Ṛgveda 21 times, and Yahweh is the name of the highest divinity in the Old Testament.

If the Vedic element was important, as is perhaps reflected in the mysticism of the Egyptian Book of the Dead, the cult of the dead and resurrection remained the most important element of the Egyptian religion. This cult continues to form the cornerstone of the three Abrahamic faiths.

The Vedic presence via the Mitanni in Egypt and the Near East occurs several centuries before the exodus of the Jews. This presence is sure to have left its mark in various customs, traditions, and beliefs. It may be that this encounter explains uncanny similarities in mythology and ritual, such as circumambulation around a rock, the use of a rosary of 108 beads, (or the idea of 33 gods in pre-Abrahamic traditions). These practices are easily understandable within the Vedic system, whereas they are remembered as commandments to be believed without understanding in the Western faiths. [4]

Sigmund Freud in his essay, Moses and Monotheism (1937) proposes that Moses was an Egyptian linked to the court of Akhenaten. In defence of this proposal he argued that the Hebrew word for “Lord,” “Adonai,” becomes “Aten” when the letters are written in Egyptian. [5]

The memory of India’s interaction with Egypt persisted within the Indo-Iranian world. The Iranian scholar Al-Biruni (973-1048), speaking of chariots of war in his book Tarikh Al-Hind, mentions the Greek claim that they were the first to use them and insists they are wrong because the chariots were already invented by Aphrodisios the Hindu, when he ruled over Egypt, about 900 years after the deluge. [6] This reference, which cannot be literally true because of the sheer distance between the two regions, is significant for it preserves the memory of a “Hindu” (Indic-inspired) king of Egypt prior to the Greek state. The reference to the chariots of war of this king (Akhenaten) seems to remember the foreigner warlords Hyksos (literally, ruler of the foreign countries) who ruled Egypt during the Second Intermediate Period just before the New Kingdom to which Akhenaten belonged.

It is not surprising then that the iconic Shiva-Shakti Yantra of the Indian spiritual tradition is identical to the Star of David of the Jews. A picture of the Star of David from the Leningrad Codex with a date of 1008 in its colophon is presented for comparison. 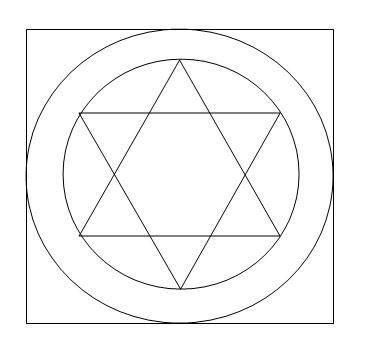 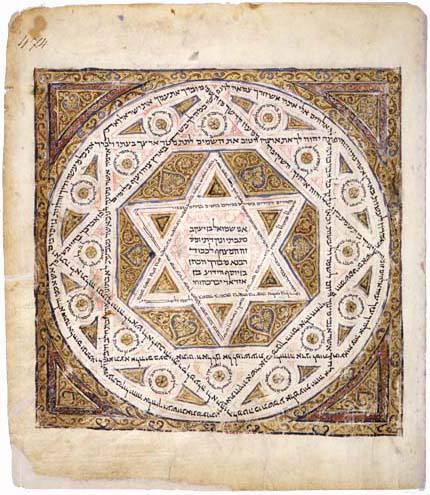 Leningrad Codex: the oldest complete manuscript of the Hebrew Bible in Hebrew, 1008 CE.

But how could the Indic element be so far from India, in Syria and Egypt? Scholars have suggested that after catastrophic earthquakes, or a long drought that dried up the Sarasvati River around 1900 BCE, there was the abandonment of Harappan cities and great migrations away in all directions [7]. Within India, we see the focus of the Sindhu-Sarasvati culture shift eastwards. To the west, we see the Kassites, a somewhat shadowy aristocracy with Indic names and worshiping Surya and the Maruts, in Western Iran about 1800 BCE. They captured power in Babylon in 1600 BCE, which they were to rule for over 500 years. And then, of course, we have the long line of the Sanskritic Mitanni aristocracy of Syria that we have already spoken about.

Megasthenes (350-290 BCE), the ambassador of Seleucus I to the court of Chandragupta Maurya in Pataliputra appears to have been aware of the connections between the Indians and the Jews. In the third book of Indica, as available to the Church Father Clement of Alexandria (200 CE), he writes: “All that has been said regarding nature by the ancients is asserted also by philosophers out of Greece, on the one part in India by the Brachmanes, and on the other in Syria by the people called the Jews.” [8]

A thousand years later, the memory of a special link between the Jews and India persisted. Al-Biruni mentions on page 206, vol. 1 of Alberuni’s India by Edward Sachau, that no foreigners excepting the Jews were permitted to enter Kashmir during the period it was under attack by Muslims.

India has its own Jewish communities that are found principally in South India; the oldest of these is that of the Cochin Jews. They believe they are the descendants of traders from Judea who arrived in 562 BCE, with others coming as exiles in 70 CE after the destruction of the Second Temple [9]. It appears that there was migration of communities in both directions.

Subhash Kak is Regents Professor and a previous Head of the Computer Science Department at Oklahoma State University, who has made contributions to cryptography, artificial neural networks, and quantum information.

Kak is also notable for his Indological publications on the history of science, the philosophy of science, ancient astronomy, and the history of mathematics. Alan Sokal labeled Kak “one of the leading intellectual luminaries of the Hindu-nationalist diaspora”.