The “Secrets of the Sun Sects” makes the case for the extensive use of solar technology by ancient civilizations. There are two strands of evidence, parabolic solar concentrators and heating large black stones. Through two simple devices, it is shown that the successful societies of antiquity were using the sun to underpin their industry, art and science. The solar relics are surprisingly common and are all tied together with the rediscovery of lost techniques that are proving useful today. The implications are explored in some reframed histories of the important sun cultures.

The focus of this article is the parabolic solar mirrors that are supposed to have existed in antiquity. The majority of comparable proposals fall down primarily because there is no method to make the elusive devices. For centuries, the prevailing view has been that spherical reflectors make poor parabolas, ”The Math behind Burning Mirrors” refutes this completely. With this change of perspective, Christopher Jordan not only shows how they built and used these tools, but also explains many anomalies from the artifacts. These curved mirrors turn out to be the most powerful devices up until the twentieth century with amazing capabilities.

The problem of how to make powerful solar concentrators has plagued historians and scientists from Archimedes’ time to Newton’s. The reasons for this interest are not abstract, but the practical uses of the ideal curve. A perfect parabola will concentrate sunlight infinitely, which can be very useful, alas, perfection is impossible to engineer.

A hemisphere is easy to make, but it is thought that it proves a poor parabola. The paper above shows explicitly that if smaller and smaller sections of a sphere are used, the approximation to a parabola increases exponentially. If a twentieth of a spherical surface is used, it concentrates sunlight by several thousand times. If a hundredth of the surface is used, it has an incredible concentration ratio of several million. See the math paper for the detailed calculations. 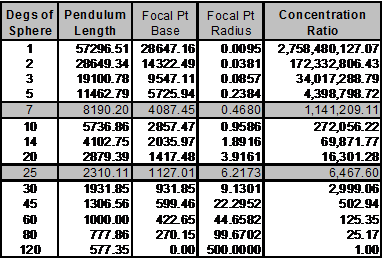 The math that underpins the idea is indisputable, but it is the physical proof that persuades most people. There is also the matter of whether the ancients had the technology to build such devices. To address these issues, the mirrors have to be made, tested, found in the archaeological record along with explicit evidence of ancient use. 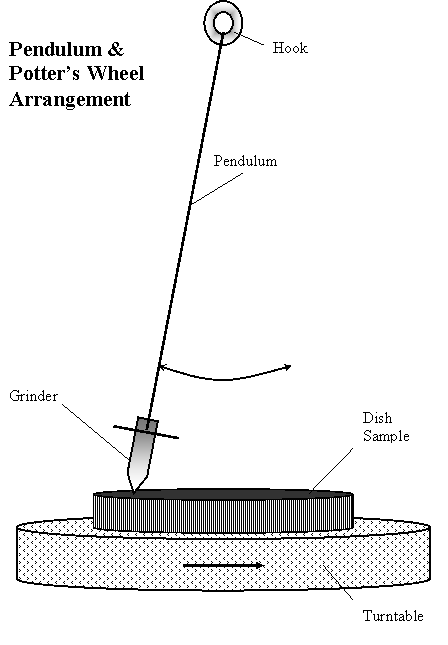 The construction task becomes much easier when only a small spherical section is required. To make a seven-degree spherical arc requires only a pendulum, grinder and patience. This can be combined with a potter’s wheel to speed up the process and guarantee the surface. No one argues that pendulums and potters wheels were unknown in the old world.

With this set up, ancient craftsmen could make mirrors so powerful they could vaporize virtually anything at their maximum power. Beneath the upper limit, there are points where materials can be melted or just warmed. This is the solution to the ‘Burning Mirror Problem’ associated with Archimedes. These dishes have an intense beam focused at a distance equal to half the length of the pendulum. If the pendulum is 100m and the dish is 2m wide, there will be a point of light with over 100MW/Sqm intensity created at 50m when the dish is pointed at the sun. This is a cannon compared to the majority of these weapons, which were shield sized and designed to blind the enemy on the battlefields.

Weaponry is only one area, in ”Secrets of the Sun Sects”, many of the other uses are demonstrated and then placed in their historical context. Some of the methods have been displaced by better ones, but others lost to time still have utility. The roles played in old stonework, fine art, jewelry, science and chemistry are explored in detail.

It becomes clear that many anomalous artifacts can only be explained by these devices. The most compelling are the huge vitrified stones found across the globe. Some experts deny that the finishes are glazes, primarily because they cannot be applied even today. These finishes cannot be created by any method other than an intense beam of light. This is adequate proof to most that the dishes were used in some cultures.

Alternatively, there are the countless references in texts that mention the devices in use. Prior to the rediscovery of the construction method, sun dish descriptions were considered fanciful exaggerations, now they can be fully appreciated. From the Iliad to the Bible, the Vedas to Conquistador accounts, the Greek and Muslim scientific tracts, each clearly describe mirrors in use. Intriguing references to long-range burning mirrors in Muslim papers, the blazing shields of the Greek wars, Incan sun dish competitions and the intense blinding light of Siva poetically attest to these ”divine” tools in key historical settings. Indeed this anecdotal evidence is the root of the persistent rumors of ancient burning mirrors.

Any remaining doubts as to the existence of sun dishes in the old world can be quelled by a museum trip. There are thousands of these devices on display. After creating and using a sun dish, it is obvious that the curve is almost as imperceptible as a shaving mirror. The once active items are catalogued as less interesting oxidized metal objects such as shields, helmets, trays, gongs and ritual garb. However, once the shallow curves are identified, the utility becomes clear. Dishes from the cultures of the Mediterranean, Egypt, Asia, the Americas and Neoliths are all to be found.

The definitive presence of these devices raises other questions about the development and decline of several disciplines and cultures for that matter. Alchemy and the lead to gold transform has left little doubt that these men had a poor grasp of chemistry and lacked the tools for most of the procedures. The more thoughtful look beyond the gold and recognize the origins of chemistry. With these powerful solar devices on hand, the alchemist had the ability not only to create certain materials, but also to readily experiment with others. 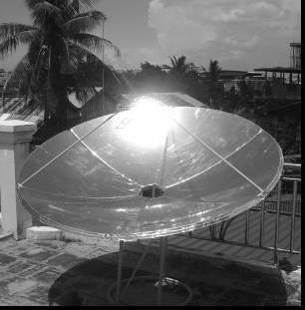 The history of ceramics helps illustrates the point. It is believed that ceramics evolved with the evolution of the wood kiln and complex firing techniques. Most stones when placed in a normal fire will not alter their composition in anyway at all, yet this leap in process was made throughout the ancient world. There is no doubt that kilns were eventually used to produce large quantities of potteries. However, Jordan contends that the first experimental work was carried out with these mirrors.

After some ceramists suggested it was impossible to make ceramics with sunlight, the technique was demonstrated at an International Ceramics conference. Despite the production of glazes in minutes as opposed to hours, the historical concept gained little traction. However, it was shown that it is easy for craftsmen to expose a range of materials to very high heats using parabolic dishes.

Recent mirror research followed a similar path to the speculative alchemist. Metals, rocks, gems, bricks and ceramic paints were just left in the beam for a few minutes to see what happened. The solar device was made and techniques were devised to anneal gems, cut stones, fire pottery, produce ceramics, vaporize, cut and smelt metals in less time than it takes to fire up a wood kiln. Even kids today appear to be treading the same path with homemade reflective dishes. This is not beyond the scope of an ancient craftsman, whose normal methods involved elaborate kilns and would mostly result in failure. The inference is that the development of many fields owes a great deal to the use of this solar technology.

Jordan shows techniques that delight artisans and scientists alike, with a tool that is a little cumbersome, but delivers a very high power to cost ratio. Uniquely historians find the knowledge useful in reframing the past. The lost tract ”On Burning Mirrors” has effectively been reconstructed and shows why ancient scholars obsessed over spherical surfaces. Despite doubts over the most famous Burning Mirror of Archimedes used at Syracuse, it is certain that these tools were utilized in the ancient world. Understanding the operation of sun dishes will surely lead to some famous historical texts being rewritten or at least reinterpreted.

Scientists can use dishes to reduce the costs of high temperature research. The solar concentrators have already been used to make unique new types of crystals for photovoltaic cells. It is expected that similar techniques will be developed for industrial production. Meanwhile artisans can recreate those revered finishes of the past. The sun cultures produced some of the finest stonework, it is only fair that artists trying to mimic it should at least have the same power at their fingertips.

In the present age when we are looking for ways to solve our current energy issues, it seems that the ancients can still teach us a thing or two.

Novels by Philip Newman with research by Christopher Jordan