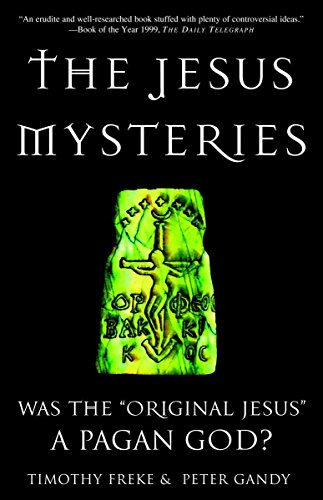 Was the 'Original Jesus' a Pagan God? 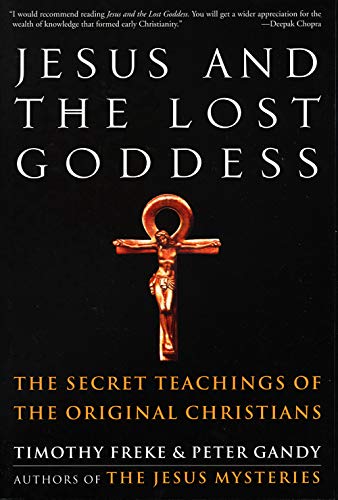 Jesus and the Lost Goddess

The Secret Teachings of the Original Christians

The idea of some sect ‘making up’ the Jesus story may seem strange today, but this is because we no longer think of myths in the same way as did our ancestors. To us myths are irrelevant fantasies, but the ancients regarded them as profound allegories encoding mystical teachings. Mythical motifs represented philosophical principles. They were an archetypal vocabulary with which to think. Creating new myths was a way of exploring new ideas. Reworking old myths and syncretising them to create new ones was a major preoccupation of Pagan, Jewish and Christian Gnostics. Epiphanius, for example, describes the Christian Gnostics as using ‘allegorical interpretation’ to freely ‘recompose’ Jewish scriptures and ‘Greek epic mythology’, which are precisely the two sources used to create the Jesus myth.

In our latest book Jesus and the Goddess we explore how the Jesus story was only a part of a much greater body of Christian mythology, all of which combined Jewish and Pagan mythological motifs. The original Christians treated the Jesus story as an allegory to be used to introduce beginners to the spiritual path. For those wishing to go deeper than the ‘outer mysteries’, which were only ‘for the masses’, there were secret teachings or ‘inner mysteries’. These were ‘the secret traditions of true Gnosis’ which, according to the ‘Church Father’ Clement of Alexandria, were transmitted ‘to a small number by a succession of masters.’ Those initiated into these inner mysteries discovered that Christianity was not just about the dying and resurrecting Son of God. They were told another myth that few Christians today have even heard of. The story of Jesus’ lover. The lost and redeemed Daughter of the Goddess.

The original Christians venerated the divine not only as God the Father, but also as Sophia, the Wise Goddess. Paul tells us in his First Letter to the Corinthians that ‘Among the initiates we speak of Sophia’, for it is ‘the secret of Sophia’ that is ‘taught in our Mysteries’. When initiates of the inner mysteries of Christianity partook of Holy Communion it was Sophia’s passion and suffering they remembered. Amongst the original Christians, priests and priestesses would offer initiates wine as a symbol of ‘her blood’. The prayer would be offered ‘May Sophia fill your inner being and increase in you her Gnosis’. It was her they petitioned

Come hidden Mother; come, you who are made manifest in your works, and give joy and rest to those who are bound to you. Come and partake in this Eucharist which we perform in your name, and in the love feast for which we have assembled at your invitation.’

In the secret inner mysteries of the original Christians the Jesus story was put in its rightful context at the end of a cycle of Christian myths which begin with the ineffable Mystery manifesting itself as a primordial Father and Mother, and which culminates in the mystical marriage of Jesus and Sophia. All of these myths were then revealed to be allegories of spiritual initiation – symbolic stories which encode a profound philosophy, with the power to transform an initiate from a Christian into a Christ.

The Myth of Sophia

The are many versions of the Christian Sophia myth, but the essence is the story of her fall from her Father’s house into the world, where she loses her way, looks for love in all the wrong places, becomes abused by many false lovers, and eventually falls into prostitution. Eventually she repents and calls out for help, whereupon her Father sends down her lover-brother Christ to rescue her. Sophia represents the soul of each initiate and the myth is an allegory for the fall of the soul into incarnation in a human body, where it becomes lost in the world, until its eventual spiritual liberation through contacting the Christ within, representing the Consciousness of God at the heart of all beings.

The myth of the Christian Godman Jesus can only be properly understood alongside the myth of the Christian Goddess Sophia. In the myth of Sophia, the Goddess is the central figure, whilst her brother-lover is an incidental character. In the Jesus myth it is the opposite. The Godman is the central character. Yet the myth of the lost Goddess forms an important subtext to the Jesus story, which would have been obvious to Christian initiates familiar with both allegories. In the gospels the two Marys represent the higher Sophia and the fallen Sophia. They are both called by the same name to emphasise the fact that they are mythologically aspects of the same figure. As in the Sophia myth, the first Mary is a virgin mother, like Sophia with the Father, and the second is a prostitute lover who is redeemed by Jesus, like Sophia lost in the world.

Like her son/brother/lover Jesus, the Christian Goddess is a syncretic figure created from both Pagan and Jewish sources. The Gnostic Christians themselves trace the sources of their Sophia myth back to Jewish texts, such as Genesis, Jeremiah, Ezekiel and Proverbs, and various Pagan myths. For example, essentially the same story of the fallen and redeemed Goddess, often pictured in two aspects as virgin lover and prostitute lover, can be found in the Pagan myths of Aphrodite, Helen, Eros and Psyche and, most famously, Demeter and Persephone at Eleusis, all of which, Pagan writers tell us, are allegories for the descent of the soul into incarnation and its eventual redemption.

The figures of Demeter and Persephone were developed by the Greeks from ancient Egyptian mythology. The Pagan philosopher Porphyry tells us that the Egyptian Goddess Isis is equivalent to both the Greek Goddesses Demeter and Persephone. Just as the Egyptian myth of the dying and resurrecting Godman Osiris is the earliest source of the myth of Jesus, so the myths of Isis is the earliest sources of the Christian myth of Sophia the lost and redeemed Goddess.

Sophia, whose name means ‘Wisdom’, had been the Goddess of the Pagan philosophers for centuries. Indeed, the name ‘philosopher’, first used by Pythagoras, means ‘lover of Sophia’. Although often pictured today as dry academics, these brilliant intellectuals were actually mystics and devotees of the Goddess. Sophia was also an important mythical figure for Jewish Gnostic philosophers, such as Philo the Pythagorean.

Although later rejected by mainstream Jews, there had always been a Jewish Goddess tradition. At one time Israelites had worshipped the Goddess Asherah, as the consort of the Jewish God Jehovah. In the 5th century BCE she was known as Anat Jahu. In texts written between the 4th and 1st centuries BCE, such as Proverbs, The Sophia of Solomon, and The Sophia of Jesus the Son of Sirach, she becomes God’s companion and co-creator Sophia. The Jewish Sophia is the lover and inspiration of the good and the wise. She is ‘an initiate in the Mysteries of God’s Gnosis’, who teaches her followers to become ‘friends of God’ – the ubiquitous name used by Pagan, Jewish, and Christian Gnostics. The Sophia of Solomon assures us

‘Sophia shines brightly and never fades. She is readily discerned by those who love her, and by those who seek her she is found. She is quick to make herself known to all who desire her Gnosis.’

The Jewish Sophia literature talks of a mythical ‘Good Man’ – no one in particular – who is the Goddess’ envoy on earth. Moses was pictured as such an envoy. According to the Exodus myth, when he passes on his authority to Joshua (Gk: Jesus) he also receives ‘the Spirit of Sophia’. For the Christian Gnostics, their mythical hero Joshua/Jesus is likewise Sophia’s envoy who comes to reveal her Wisdom which leads to Gnosis. Hence ‘the secret’ that Paul proclaims in his Letter to the Colossians is ‘Christ in whom is hid the treasures of Sophia and Gnosis.’

In the Jewish Sophia literature the Good Man is persecuted by his own people for preaching Sophia’s wisdom and condemned to a ‘shameful death’. But he is vindicated afterwards and confronts his persecutors as their judge in heaven, where he is one of the ‘Sons of God’. In the hands of Christian Gnostics this figure of the Good Man is transformed into Jesus the ‘Son of God’, who comes they say ‘so that Sophia might be proclaimed’, is murdered by his misguided kinsmen, but is vindicated by his resurrection to heaven where he becomes the divine judge.

In our view the evidence clearly suggests that Christianity was originally a synthesis of pre-existing Jewish and Pagan spiritual philosophy and allegorical mythology, and that central to that tradition was the myth of the Goddess Sophia. The eradication of the Christian Goddess by the patriarchal Roman Church has left us all motherless children. Women have been denied a sympathetic rapport with the Divine Feminine. Men have been denied a love-affair with a female face of Deity. Spirituality has become part of the battleground which separates the sexes, when it should be the sanctuary of eternal fellowship. The original Christians, however, practised ‘partnership spirituality’. They were noted for valuing men and women equally, as expressions of God and Goddess. They saw the division of the sexes as a correlate of that primal polarity which is the basis of life. A duality which when made One, as in the act of love, brings the bliss of mystical union that they called ‘Gnosis’.