Somalia, in the Horn of Africa, has always been remote but its inaccessibility is all the greater today after nearly two decades of warfare and anarchy. While chaos continues in the south, the northern part of the former “Somali Democratic Republic” has achieved remarkable peace and stability in recent years, established its own borders and declared its independence and statehood as the Somaliland Republic – a distinct entity from the failed state in the south. Musa Hersi, a Somali émigré living in the UK, recently had the opportunity to travel in the Somaliland Republic. He came across extensive and apparently very ancient stone ruins in the central area around Ain (marked with a cross on our map), including a number of small pyramidal structures. He reports here exclusively for grahamhancock.com.

I wish to make clear to the reader at the outset that I am neither an archaeologist, nor a writer about archaic civilisations. I am no authority on any particular science. I believe I can best describe myself as an enthusiast of and a keen reader about past human civilisations. I would therefore hope that any drawbacks detected in the lingo and concepts used in this article will be seen in that light. The same goes if my hypothesis about the existence of previously unexplored evidence in Somaliland is seen by some as, perhaps, farfetched. Whether my claims can be proved or otherwise can wait until further investigations are made

On a private visit to Somaliland in the summer of 2005, I happened to be in a remote region called Ain for a week. During that period, I came across stone mounds and ruins, clustered along a stretch of land about 15 km long and 5 wide. As the reason for my visit was local community development, I was not able to do much work in recording what I saw there. However, I was able to reconnoitre the landscape and some of the structures involved. The following is a tentative attempt to present a picture of what I saw there, and it will be divided into three subheadings; a look at the general synopsis of the three distinct ruins; the myths and beliefs of the local people surrounding these ruins; and the challenges and difficulties threatening the future existence of these sites, which may be of immense scientific importance to the country and to the wider world.

General synopsis of the site 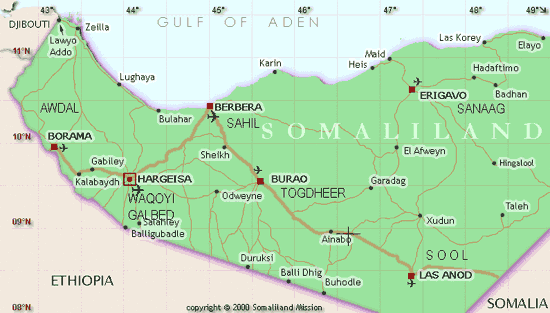 The site, which I am referring to, is located near Ainabo in eastern Somaliland. The area extends about 15km long and 5km wide. It comprises of three distinct sites starting from Badwein in the east, Halibixisay in the middle and Cayaarsalaqle in the west. The distance between the east and west points is about 15 km apart, with the site in the middle a bit closer to the western point. The area is of a predominantly gypsum rock type, and the water table is not much below the surface, with many rock wells hollowed out by water in the past aeons. The soil is a bit oily, of greyish white colour and very saline, to the extent that nomads come from distant places to transport sacks of this salty mixture (Dheged) to supplement mineral needs of their animals. As a result of these, the terrain and its soil possesses a baked-cake quality with the elements having very little effect in terms of wearing and erosion. Consequently, these sites remained preserved throughout the ages, although many of them are very fragile and crumbling. The structures comprise of mounds of piled up rocks, others built in a more structured way and tapering upwards (although flat at the top) like mini pyramids, caves and ruins of rock buildings.

This place marks the eastern corner of the area in question, and it will suffice to quote the comments of one of the first European explorers ever to venture into Somaliland, E. Sloane, who reached Badwein on 7 March 1891. He wrote the following account of what he saw there:

We marched north-east to Badwein, where we found more wells, and a large tank of water, four hundred yards in circumference, with perpendicular sides forty feet deep, supposed to have been excavated in the limestone rocks by ancient Gallas [a Hamitic people of Ethiopia, also known as the Oromo, whose language is related to Somali). Ruins, which rise half smothered from among a tangle of aloes and thorn-jungle close by, cover an area of forty thousand square yards, and in some of the houses the walls are still ten feet high. E___ rode into a large house or temple, to find it two hundred feet long and one hundred feet wide, divided by a number of partition walls. They are built of limestone, much decomposed by rain, and are supposed to be the work of Gallas, but no one knows who built them. Some of the Somalis say they date back to the time of a race before the Gallas“ ” (Page 91)

125 years after Mr Sloane made these depictions, the site still remains the same today.

The site is named after a local well that waters the livestock of the indigenous nomadic community. Legend has it that a thirsty camel found the well by sniffing the water in the well hole from afar and guided people into it.

What distinguishes this place is the concentration of mounds dotting the whole landscape of several square kilometres. These structures, with stones not piled haphazardly but built together in a more systematic way, are quite different from the occasional hilltop mounds customarily seen on all the hilly terrain of eastern Somaliland, which are mainly heaps of rock. 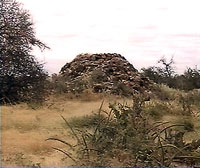 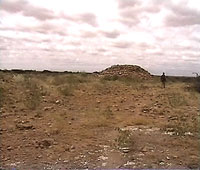 One of the many strange mounds strewn about at Halibixisay Site.

The sheer number of the mounds at Halibixisay is quite astounding, dotting the whole area, many of them smothered by a thickset jungle of acacia, thistle and aloe plants. Although I have not made a proper count, I estimate there are up to hundred individual mounds in that particular site. Many of these structures are literally crumbling due to their great age coupled with the impact of the elements, but a bigger threat comes from the presence in the area of army units with some heavy equipment. I have seen them remove stones for trenches and other building purposes. This vandalising and also the general impact of an army and its armoured personnel carriers and other heavy trucks towing artillery, may cause untold damage to these already very fragile ruins.

There is also a huge mound looking like a small hill with a collapsed top forming an unusual cavity. Scattered about at the mouth and inside the cave are huge rocks, chiselled and formed into rectangular and square shapes with ruler sharp sides. One would think at first glance these are the material of the ceiling of the collapsed roof of the edifice. The most interesting thing one would notice is the shape of the rocks, some of them collapsed and some still at the ceiling, which are well carved as if fashioned by the skilled hand of a mason. Local people say the cave stretches and fans out far and wide with drawings, carved stones and other manmade impressions. The masonry at the mouth of the cave and the local reports of drawings deep inside inadvertently prompted me to think this small hillock to be a buried pyramid or some other sort of mega-building. There is no doubt this is not a normal cave 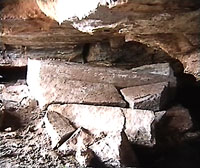 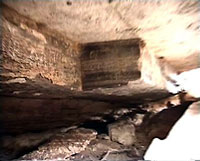 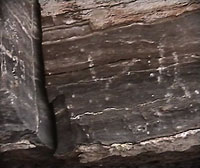 The collapsed roof of Cayaar-salaqle cave

Local people avoid climbing on top of these mounds or even lingering around these sites in the belief that they are inhabited by Jinns, or bad spirits, that may cause harm to those who venture close. Children herding goats or camels are always reminded not to go near these mounds or ruins, although nobody bothers about animals grazing around them and sometimes goats can be seen climbing on top the mounds. The myth of the Jinns has clearly had a deterrent effect against human vandalism or physical destruction of these structures. Another important characteristic of the local nomadic community, in distinct contrast to practices of treasure- hunting through vandalising ancient human graves by urban people, is the absence of any grave-robbing culture (perhaps reinforced by the myth of Jinns),.

The Somalis call stone mounds taallo (s), and the word has an archaic connotation. Through metaphor it implies “the thing that was there from time immemorial”, suggesting a prehistoric legacy. Another name also used locally is maanlo (s). Typically this suggests a mind-boggling thing. Both names indicate that these works predate the birth of nomadic people living in the eastern Horn of Africa for thousands of years. Taallo is also used in modern Somali literature as a MEMORIAL for a revered thing or person.

As we have seen, early European visitors reported these mounds were the work of Galla, a people thought to be the ancestors of certain ethnic groups in the Horn of Africa. But there are also some questions about that, with many people doubting whether these varied and complex constructions could be the work of a nomadic community, as the Gallas were supposed to be.

The site, despite its archaeological significance, has recently become a base for a military garrison and militias with a variety of armoured vehicles and other types of heavy equipment. The army is there because of border conflict between Somaliland and the North-East Somali province of Punland. The site was primarily chosen for its proximity to an all-weather road as well as the availability of water in the area. This presence of military in the site poses a unique danger to the future sustainability of these remains.

Clearly something needs to be done firstly to research and map the various structures of the site; and secondly to protect the area from further degradation and loss of valuable evidence before proper archeological excavations can be made. This would need the involvement of the local community; head of army and militias in the area and the local government if managing and protecting the area is to make any significant and long-term impact.

I believe that now, when this site has been rediscovered, and the new challenges and difficulties threatening it have been identified, that further action and research are justified, but due to its political isolation and other circumstances surrounding Somaliland, much needed resources for work like this cannot be raised locally.

I wonder if there is any one interested to sponsor further investigation of these mysterious and archaic remains.