Ted, who lives in New Zealand, has a deep fascination with sacred mathematics and in particular sacred geometry and its relationship to his other main interest, cosmology.

The following article is based on over 17 years of research into these fascinating subjects. After reading Graham’s latest book – Magicians of the Gods – he felt it was time to share some of the findings from his research, particularly those relating to the astronomical event around the summer solstice in 2020. What he has discovered may have far reaching consequences for us all.

If you have any have any questions, need further clarification and/or have constructive comments for Ted he can be contacted on the forum on this website.

On the summer solstice of 2020 a unique astronomical event will occur. There will be an annular eclipse of the sun, which in itself is not unusual, but the position of the eclipse relative to the galactic equator will be. Below is a view of this alignment as seen from outer space. The astronomical phenomenon of the sun sitting on the galactic equator may look familiar, for indeed it is. 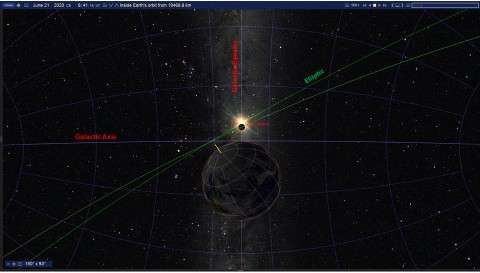 Earth Moon and Sun all sitting on the Galactic Equator

On the winter solstice of 2012 the ancient Mayans had predicted this type of event. They used the sun sitting on the galactic equator at the winter solstice in 2012 as the datum of the end of a cycle, their Long Count Calendar. It is well known that the ancients were tracking the precession of the equinoxes and using this knowledge to record the time it took for the cycle of precession to complete a full circuit.

What is more intriguing about the 2020 summer solstice event is how it relates directly to Stonehenge in England and the Great Pyramid at Giza, both well-known ancient astronomical monuments.

This article will explore these relationships and their implications.

Precessions of the Equinox

To explore these relationships, an appreciation of what is causing precession is necessary. The standard scientific explanation is that it is due to the Earth’s slow wobble, similar to a spinning top which wobbles. This explanation is certainly supported by the observation. However, these observations can be due to two other phenomena related to the sun’s movement relative to the galactic axis. The same observations would occur if the sun was moving because of an interaction with another large celestial body that is close by, e.g. the star Sirius, and the movements could also be caused by the interaction with the electromagnetic environment of the Milky Way galaxy. This relatively new understanding of the electromagnetic nature of galaxies is slowly gaining acceptance and being vigorously promoted by the Thunderbolt Project.

Below are diagrams comparing the three possible causes of precession as observed from Earth. 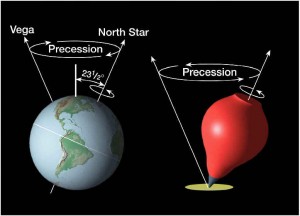 Sun Interacting with another star 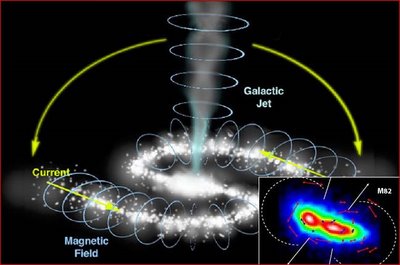 The third theory, which we will see is the most likely of the three, would have some interesting implications with regard to precessional speed. It is likely the precessional speed would vary due to the sun’s path within the current of the harmonic electromagnetic field being elliptical; this would cause the sun’s speed within the current to vary by between 25,920 years (72 years per degree relative to the background stars, and also our present speed) and 21,600 years (60 years per degree) with an average speed of 23,760 years (66 years per degree). This is compared to the presently accepted constant speed of 25,920 years, which within an elliptical cycle would be the fastest movement within the electromagnetic field: see the diagram below showing these relative speeds within the elliptic current. 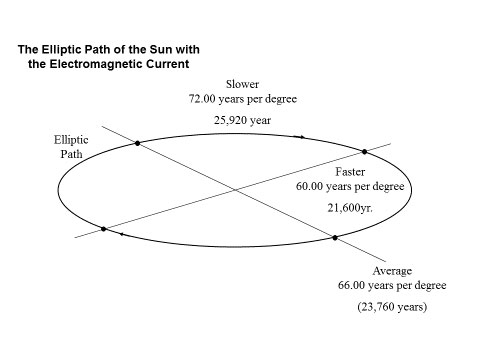 If this proves to be correct it will have implications regarding the influence of harmonic frequencies on the Earth, Sun and Moon’s size and the average distance between them. See the following four diagrams below presenting these harmonic relationships. 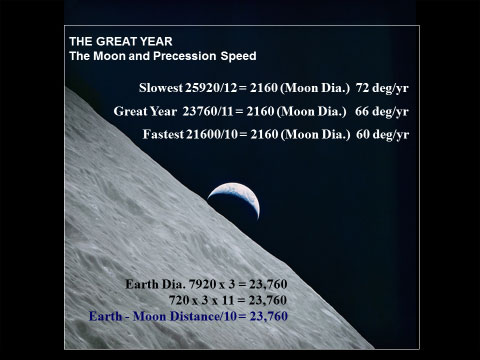 Ray Tome’s research further confirms these relationships. Below is a graph of the harmonic frequencies (from Ray Tome’s website, ‘Harmonic Theory, Physics and Maths’) which includes the harmonic numbers for the Earth, Moon and Sun’s size and the distance between them! 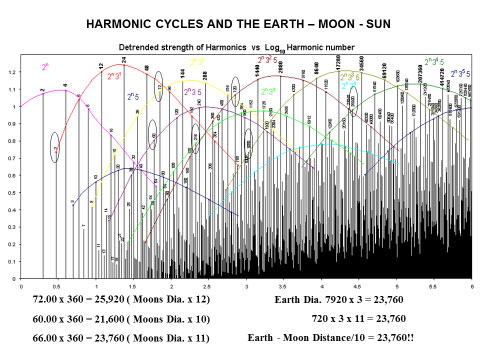 All of these relationship are further expressed in John Michell’s book, How the World was Made.

A summary of these relationships are shown in the two diagrams below, which were inspired by reading John’s informative book.

Just a note in passing: all the major numbers in the four diagrams add up to 9. This is a property known as ‘Mod 9’ or vortex mathematics e.g. 5040 5+0+4+0 = 9. To fully appreciate the mathematical significance of Mod 9 within harmonics numbers, head over to the website: thenumbernine.weebly.com. 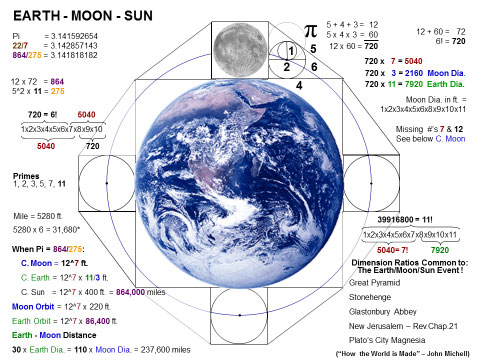 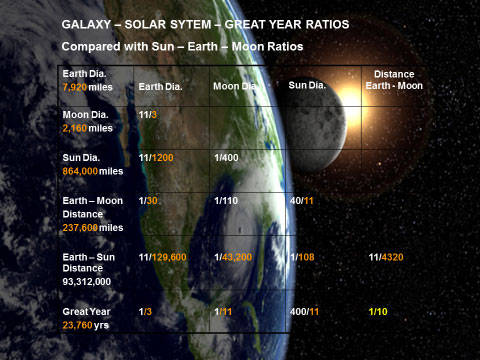 These diagrams are related directly to Stonehenge and the Great Pyramid. Below are the well-known geometry ratios at Stonehenge and their relationship to the Great Pyramid. This relationship is also fully explored in John Michell’s book; for he showed that these ratios were not only used at Stonehenge and the Great pyramid, but also at Glastonbury Abbey, and recorded as the dimensions of the New Jerusalem (Revelations. Chapter 21) and of Plato’s City Magnesia. The question has been asked, ‘Where is the Sun in this diagram?’ As we will see, it is hidden behind the Moon, which means that it is being eclipsed. 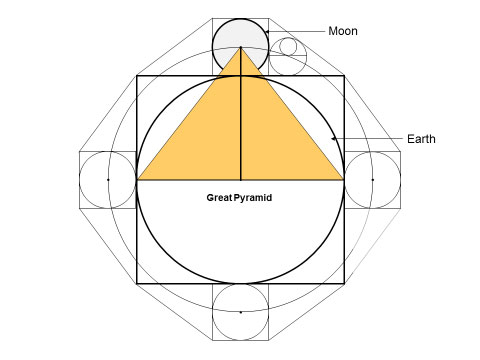 The view below shows the sunrise at Stonehenge on the summer solstice of 2020. 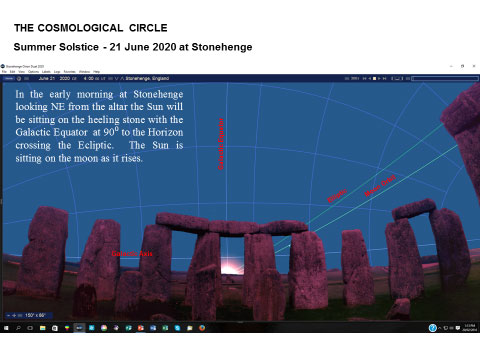 At Stonehenge there is, on that morning, an amazing revelation of sacred geometry hidden within the relationship of the Sun to the galactic equator and axis of the Milky Way. This can be appreciated by comparing the diagram below to the above picture of Stonehenge on 21st June 2020. 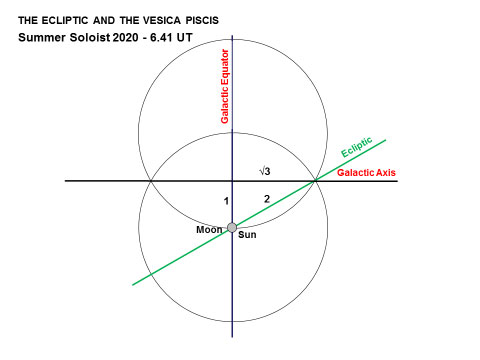 Later during that morning at Giza, looking across the city of Cairo, the same astronomical event will play out but this time relative to the Great Pyramid. Note that the sunlight has been hidden in these diagrams. Also note what Orion is pointing to with his club! 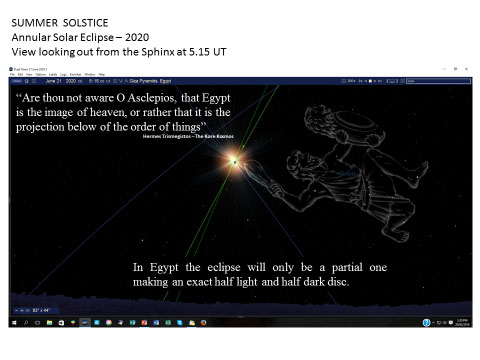 These relationships are what play out 6.41 UT as seen from space. With the Sun and Moon in their respective positions relative to Earth, which is sitting on the Galactic Axis and centred on the Galactic Equator, the Cosmological Circle is formed. This is Stonehenge and the Great Pyramid in space. This is the only time this alignment of the Earth, Moon and Sun happens along the galactic equator in this way! Note the ecliptic is flipped over relative to the view at Stonehenge and also how the two circles of the Vesica Piscis intersect each other on the galactic axis! 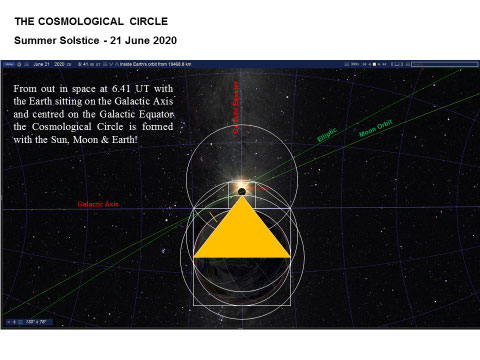 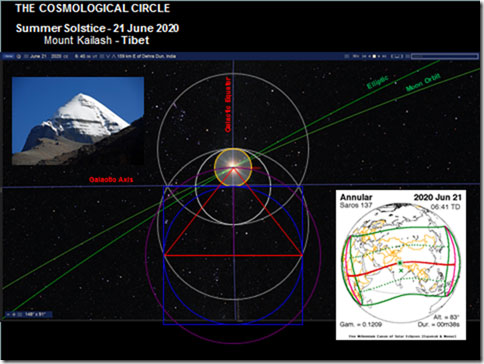 So what is so important about this astronomical event? Why has so much trouble been taken to ensure its eventual discovery? What is it about this date and time that we are being clearly directed to take notice of?

An article prepared by the faculty of mathematics in the National University of Singapore has concluded the purpose of Stonehenge was to predict meteorite showers and in particular the summer Taurid showers! There is also consideration given to precession and periodicity being factored into Stonehenge’s structure to safeguard its predictive purpose. Click here for a link to a summary of this paper prepared by the Gem Projects team.

In Graham Hancock’s latest book Magicians of the Gods he has clearly shown that the Earth sustained a major bombardment by large celestial objects around 12,800 years ago and the likely culprits had been lurking in or were associated with the Taurid showers at that time. As also discussed in Graham’s book it is highly likely that there are large objects still within this meteorite shower or associated with it that could cause another significant impact event in the very near future.

On the morning of June the 21st 2020 the Taurid meteor showers will be hidden by daylight so we will not be able to observe any incoming large meteorites until it is too late! The arrows in view in the image below, shown from the perspective of the Great Pyramid, indicate the location and direction the Taurid shower will come from during that morning. 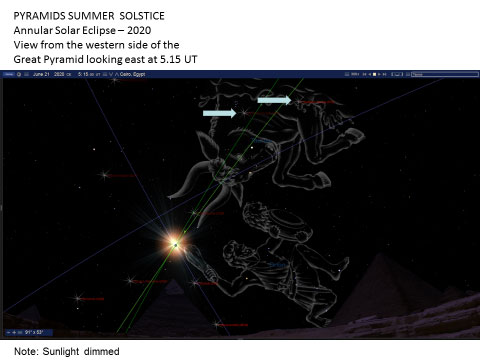 Note Orion is protecting himself from the two Taurid Showers with his sheild! Also consider that if you walked up to the Great Pyramid (representing Earth) from the western side that the Sun and Moon would sit on its apex with the ecliptic and the Galaxtic Axis forming the edges of the pyramid!

This therefore leads to a number of important questions:

So have we been given the date and therefore the time to detect the next major impact coming out of this biannual shower of Taurid meteorites?

We already know that life on Earth is extremely vulnerable to these types of celestial events, and have just recently achieved the level of technology possible to protect ourselves from these impacts – only, however, if we detect them soon enough to deal with them before the impact happens.

It would therefore be prudent for the present search efforts (Near Earth Objects Program) to be directed to finding these types of objects within the Taurid meteor shower. All that would be required is to project the path of the showers backwards from 21 June 2020 to their present position, to check if there is a major object within the Taurid shower, or one that is – or will – become associated with it. We have nothing to lose, but possibly everything to gain, by focussing our EOP efforts along the path of the Taurid meteor shower.

If the object/s are discovered in time we may have not only saved ourselves, but also gained further proof of the electromagnetic/harmonic nature of the universe we live in, and the ancient ones to thank for their awe-inspiring warning in stone. 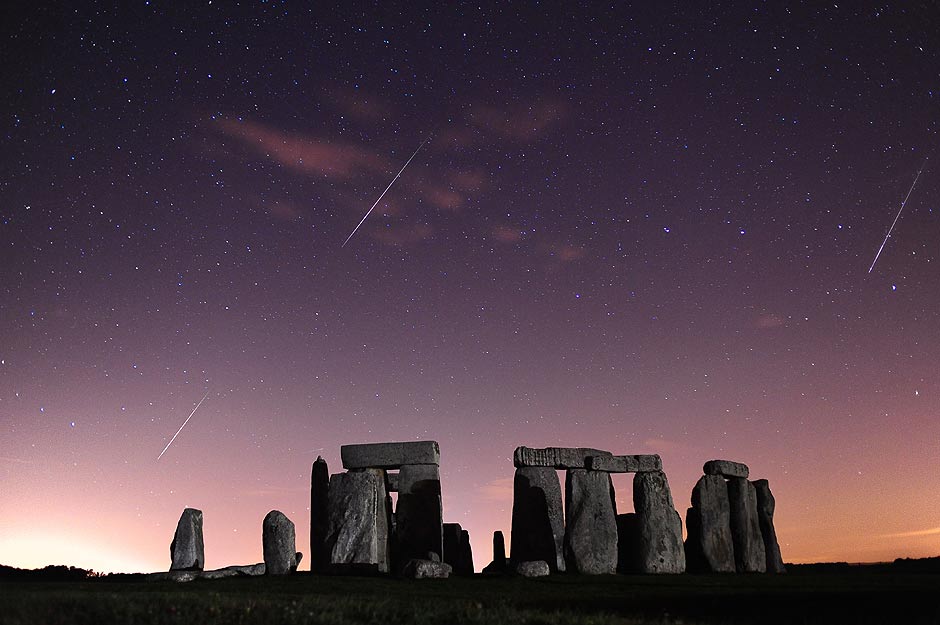 A Meteror Shower over Stonehenge at Sunrise