Jim Elvidge holds a Master's Degree in Electrical Engineering from Cornell University. He has applied his training in the high-tech world as a leader in technology and enterprise management, including many years in executive roles for various companies and entrepreneurial ventures. He also holds 4 patents in digital signal processing and has written articles for publications as diverse as Monitoring Times and the IEEE Transactions on Geoscience and Remote Sensing. Beyond the high-tech realm, however, Elvidge has years of experience as a musician, writer, and truth seeker. He merged his technology skills with his love of music, developed one of the first PC-based digital music samplers, and co-founded RadioAMP, the first private-label online streaming-radio company. For many years, Elvidge has kept pace with the latest research, theories, and discoveries in the varied fields of subatomic physics, cosmology, artificial intelligence, nanotechnology, and the paranormal. This unique knowledge base has provided the foundation for his first full-length book, "The Universe-Solved!"

In the article "Is Our Reality Just a Big Video Game?", we explored the possibility that we might be living in a computer simulation. In this article, we look instead at the possibility of a physical manifestation of reality under programmed control. In some ways, this is actually a more palatable scenario. For one thing, it avoids the necessity to answer the questions "When did it start?" and "Why don't I remember anything prior to the simulation?" In addition, it tends more to support the possibility that the programmer is non-human, which allows for many more scenarios and motivations.

So how might it be possible to programmatically generate a reality?

Let's start with nanotech, today's convenient answer to pretty much every conundrum, from solving global warming to achieving immortality. Our first scenario is the "Nanobot Swarm". We'll define the nanobot as having the following characteristics:

Since there has been some debate about the feasibility of such devices, let's take a look at where we are today from a technology standpoint, and try to extrapolate a bit into the future.

Anything less than 10 microns is pretty much invisible to the naked eye. Since 10 microns is 10,000 times the size of molecules, or the nano-scale, that leaves plenty of room to build in the other features of the nanobot. In early 2008, researchers from Northwestern and Brookhaven National Laboratory equipped gold nano-particles with DNA tentacles, and demonstrated their ability to link with neighbors to create ordered structures.1 Designed crystals of up to a million particles were built using this technology. In addition, scientists from the International Center for Young Scientists have developed a rudimentary nano-scale molecular machine that is capable of generating the logical state machine necessary to direct and control other nano-machines.2 These experiments demonstrate a nascent ability to manipulate, build, and control nano-devices, which are the fundamental premises for nanobot technology. Other than perfecting these techniques, all that remains to achieve our utility nanobot is the generation of light, wireless networking, and the ability to fly. 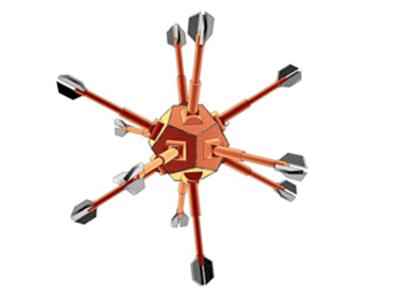 There are already light-emitting nanodiodes in the 100 nm range, so it does not seem like too big of a challenge to generate multi-directional variable-wavelength arrays of sub-micron light emitting devices. Wireless networking chips were in the 5×5 mm range in 2007, so Moore's Law should bring that size down to 10 microns by 2025. With respect to flying robots, in 2005, Proxflyer announced their "Picoflyer" remote control helocopter, with a rotor diameter of 6 centimeters. This was an improvement of more than a factor of two on their 2003 release with the 12.8 cm rotor diameter. Harvard Microrobotics Laboratory developed a 3 cm 60 milligram robotic fly that had its first successful flight in 2007.3 So, it seems that Moore's law marches on in the world of microbiotics at a doubling of the miniaturization of flying robots every two years. At this rate, we should get to 10 microns by the year 2030. This is, of course, ignoring the fact that black ops military programs are generally considered to be at least 10 years ahead of commercial ventures.

So, it certainly seems that flying nanobots are in our future. This is of significant interest, because it will enable one of the holy grails of nanotech – the Utility Fog. Conceptualized by nanotech pioneer J. Storrs Hall in the 1990s, imagine billions of nanobots, each with the capabilities of flying, linking together, generating electromagnetic radiation of any wavelength (color), and networking to a central host for instructions. Under programmatic control, this nanobot swarm could be instructed to be invisible and then, based upon some logic executed on the controlling machine somewhere, suddenly turn into a wall, a sofa, or an entire room. Some futurists believe that such a concept is inevitable this century. But, why stop at a room? Our old friend, Moore's Law, should make it possible to scale a Utility Fog to a city, or ultimately, an entire reality.

Then there is the ultimate reality-building device, the molecular assembler. In his book "Engines of Creation," K. Eric Drexler outlines how a molecular assembler could build a macroscopic object like a rocket engine from the ground up. Again, why stop there? Why not build a room, a city, a reality? We only need to rely on the exponential pace of technological development.

I mentioned at the beginning of this article that such a scenario seems to be a more likely explanation for our programmed reality, if indeed we are living in one. This is because I believe that there are a couple problems with the simulation theory. First, it assumes that the subject or player (us) is being fooled into thinking that their reality is real. We may be either willful or unwillful participants in the "game". If we are willful, we must have invoked some sort of mechanism to ensure that we do not recall the time prior to the beginning of the simulation. While these mechanisms are possible and are discussed in my article "Is Our Reality Just a Big Video Game?", the idea certainly stretches the imagination. In addition, one has to consider the motive for participating in willful ancestor simulations. Could it really be because we want to experience living in a time period at least 30 years in our past? It is hard to fathom that as a likely motivation for billions of people (unless of course, most around us are just non-player-characters, or NPCs.) Maybe if we merge with machines at the singularity point, as predicted by the transhumanists, we would yearn to experience the old days, when we were pure biological humans. But why go back and simulate a 30-year old culture with its humdrum existence, spending time picking up the laundry and cleaning the toilet, when we could just as easily experience all sorts of utopias instead – many great ones spring to mind. No, willful simulations just don't make sense to me.

Neither do the unwillful scenarios, for that matter, all of which imply that we have "keepers." What could the motivations of the keepers be? To keep us occupied since we have nothing else to do after the singularity? Why bother? To save the species? Why not just collect and freeze a little DNA instead. Or, perhaps the motivation is to educate us, or develop our spirituality? It seems to me that with that awesome post-singularity technology, there would be faster way to accomplish this. ("I know Kung Fu")

But the programming of physical reality does away with all of those motivation issues that are inherent in the simulation scenarios, because reality may simply be a construct put in place eons ago, thereby eliminating the need to explain memory suppression. Evidence suggests that the programmers, whoever they may be, established a construct for us to play and evolve in. However, they didn't just "wind the clock" and let the pre-programmed laws of nature take their course without intervention. Instead there seems to be an unseen hand maintaining the construct and the engine that drives it, applying adjustments when necessary, not unlike the periodic patch to "World of Warcraft."

Where might this engine actually exist? In traditional nanotech theory, it would be in the blueprint, or programming, that is given to the initial molecular machines. To build a full-scale reality, the same may apply. But, that is a very anthropomorphic point of view. If the programmers were not human, why should we attempt to assign human motivations, behaviors, and technologies to them? Instead, the methodology may be much more esoteric. String theorists are convinced that other dimensions exist. The Everett interpretation of Quantum Mechanics says that parallel realities exist in an abstract space called Hilbert Space. Some physicists believe that it will be shown to be possible to jump between realities. Perhaps the molecular assembler is simply in a different dimension and generating our reality in our visible dimensions. Perhaps dark energy, the mysterious all-pervasive yet repulsive force in our universe is behind the generation of our physical reality. Much of this, of course, is purely speculative, but not outside the realm of possibility. But again, these are all ideas from OUR reality. We seem to be able to think, forecast, and predict no more than 50 years into the future. Anything beyond that is completely incomprehensible to us. With life evolution scales in the billions of years, the non-human entities that may have generated our reality are most certainly more than 50 years beyond us in terms of technological evolution. Possibilities from that reality would be so far beyond our comprehension that it is futile to speculate about them. Instead, however, I submit that it is sufficient for our peace of mind to know that technology can theoretically exist to make it happen.

There is great value in this model, even if it beyond our reach to grasp. The value is that it explains everything – the apparent fine tuning of our universe, all known anomalies, the discrete nature of quantum mechanics, and the curious feeling that many of us have that there is something about reality that is a little too organized, a little too planned, and a little too programmed. A comprehensive view of the evidence is found in my book "The Universe – Solved!"