Vivid interpretation of textual legend clarifies the doctrine inspired by the mythical gods: it demonstrates a direct association with the Giza pyramids and eerily implies they were the original title holders. More intriguing still, the interior layout of the Great Pyramid derives from an astral source and suggests the existence of a chamber that alludes to Osiris. Can this secret chamber be accessed and will it finally quench all speculation? Identification of the gods attests their topographical dominion and leads to a staggering conclusion on ownership…

These gods are integral to the division of territory. The Shabaka Stone, alias Memphis Theology, was demonstrably interpreted in the Earth gyration & climate change article, with the primary deities Osiris and Seth. Their association is also founded on conclusions drawn from the Pyramid Texts under review here. Another artifact analyzed, the Westcar Papyrus, inadvertently reinforces the core hypothesis and reveals elements that digress into a wider field. I shall however, endeavor to reiterate essential extracts only (cherry pick 😉 from the source material and desist from overwhelming the reader with superfluous script.

Association of Isis with the star Sirius is universally accepted. 'Sothis' is the Greek name for Sirius. Let's assume the 'far strider', as encapsulating the Orion constellation and see where it leads us…

'…Raise yourself, o Osiris, Isis has your arm, o Osiris;

The text provides a clue that reveals the position of Osiris as being between Isis and Nephtys. Held by the arm and hand may imply one being close, the other further but never-the-less between them… we know where Isis is but where is Nephtys? (Legend also relates that although Nephtys was married to Seth, her loyalties were with Osiris -this is reiterated with the division of territory). Let's allocate the star Alnitak to Osiris and apply algebraic reasoning. The referencing is in relation to Osiris, thus I ascribe the numerical value of zero to him. From the texts we know that Sirius/Isis=3. Then it would be reasonable to infer that Nephtys=2, since Osiris is between them and the remainder of the quartet, Seth=1.

the sky, you will regularly descend with Orion in the western region

The text reveals orientation aspects and forecast a recurring event. The order in which the stars ascend above the eastern horizon and repeated when they descend below the western horizon is: the star d-orionis/Mintaka followed by e-orionis/Alnilam then z-orionis/Alnitak followed by Sirius…

Numerically (in relation to Osiris) that is Seth 1st, Nephtys 2nd, followed by Osiris (zero entity) and then Isis 3rd. 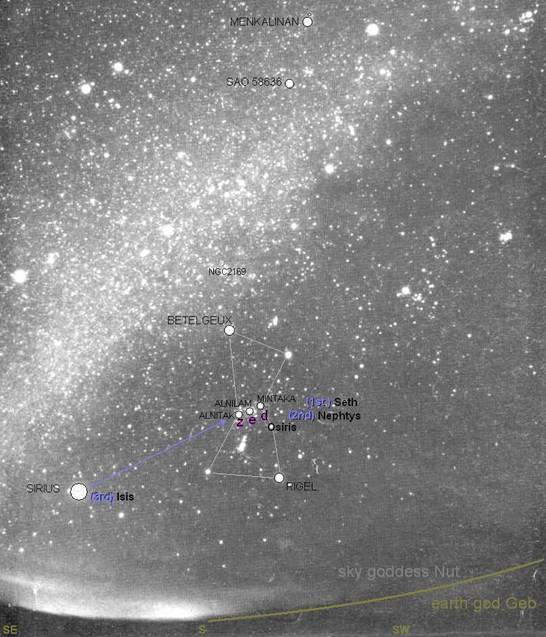 'I have passed over the paths of rostau, whether on water or land… they are at the limit of the sky..'

It is widely accepted for Rostau to occupy a dual location -both celestial and terrestrial. Now let's correlate the element of duality and investigate the possibility of a celestial-terrestrial-gods trilogy, whereby gods=stars=pyramids.

'..The sky is Given to you, and the Fields of Rushes, the Mounds of Horus,

Isis is associated with Heliopolis (obelisk?), which correlates with Sirius. Together with the Giza/Rostau/Orion duality, would it be reasonable to postulate that G1= Osiris' Pyramid, G2= Nephtys' Pyramid and G3= Seth's Pyramid??? -the anthropomorphic stars of the gods!!! 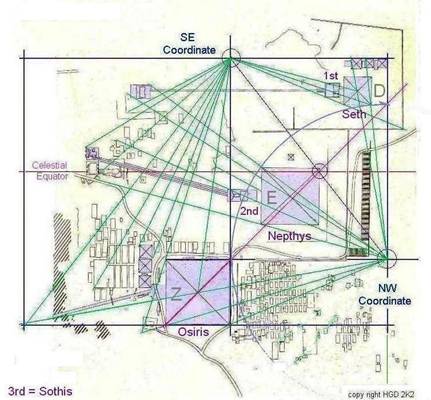 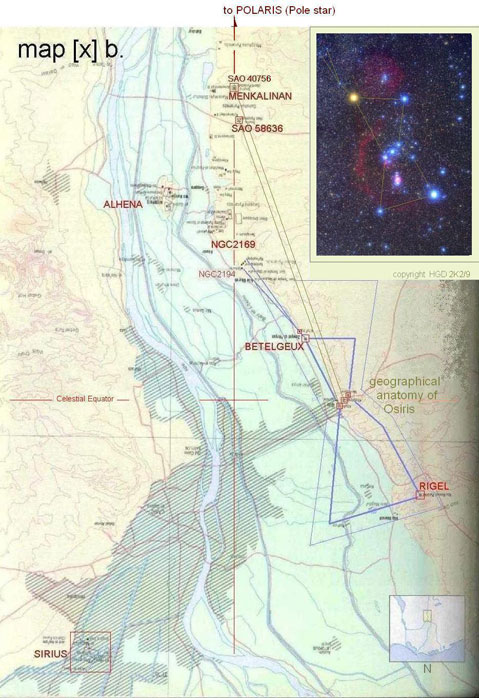 The Papyrus Westcar is considered to be contemporary, although the setting is the time of the pyramids. King Khufu had been searching for [the number of] the secret chambers of [the sanctuary of] Thoth. When commanded by the King that it be brought to him, the Djedi pronounces that someone else is ordained for the task, namely the eldest son of the three children who are in the womb of Ruddjedet.

A popular interpretation of this manuscript relates the Djedi prophecy to the 5th Dynasty rulers, who built pyramids near Abusir -a time after the rule of Khufu's grandson, Menkaure, and therefore after his death. The son of Ruddjedet, ordained for the task, could not have brought anything to Khufu after his death. According to my interpretation, in celestial terms the 'three triplets' are Orion's belt. Observable during Khufu's reign, the 'eldest' (highest above the horizon) being Alnitak (z), followed by Alnilam (e) and then Mintaka (d). 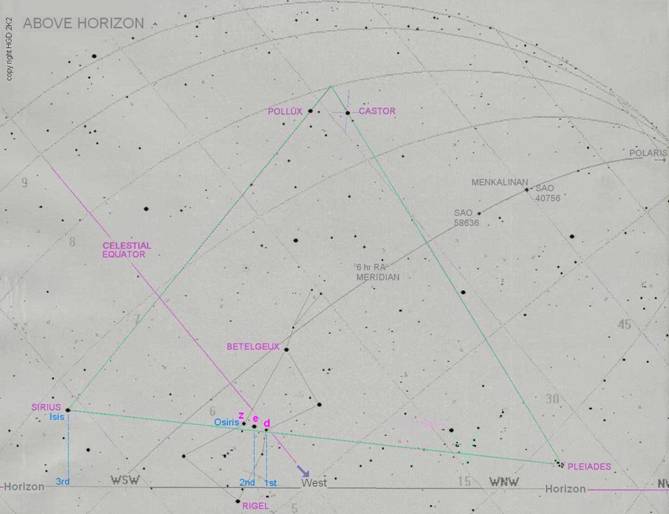 Terrestrially then, the three triplets are the Giza pyramids -the oldest being the Great Pyramid, which is Khufu's supposed own pyramid! In other words, the Great Pyramid is the counterpart of Alnitak -the 'eldest son' in Orion's Belt, which can provide Khufu with that which he has been searching for: [the number of] the secret chambers of the sanctuary of Thoth… 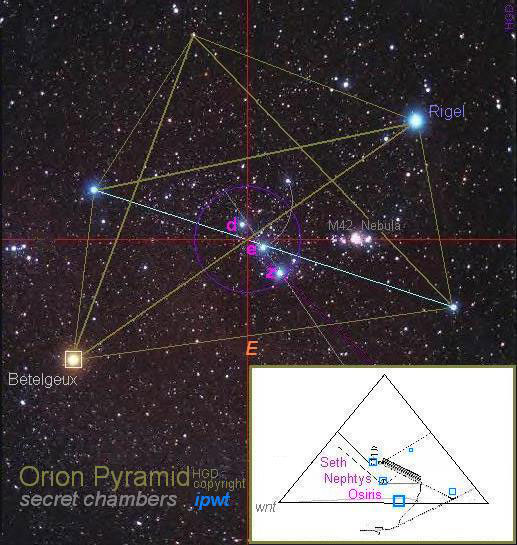 this construction of his is Osiris;…' {Pyramid Text 600}

Note: [ipwt] is not the subterranean chamber but a location at ground level -could it really be Osiris’ vault.., or is Khufu interred there? One could speculate whether access to this chamber in the bedrock is via an internal N-S passage (similar to that of the KC and QC) then again, a concealed grand entrance in the East face of the GP, at ground level seems logical. Incidentally, the East elevation also concords true with East in celestial topography. Perhaps the Queens Chamber is not such a misnomer after all -from the PT we infer its stellar association with Nephtys… Bizarre as it may seem, the ‘anomalies’ of this celestial pyramid concord thus: the Kings Chamber being that of Seth (d-Orionis), the Queens Chamber belonging to Nephtys (e) and the principal chamber (z-Orionis), which is yet to be breached, belonging to Osiris. One can only conjure what other secrets the plugs at the ascending passage junction may conceal but that is not the objective here…