Stonehenge: As Above, So Below

During the 1960s archeologists from the University of Chicago surveyed a prominent ridge in southern Turkey. They found little of interest. In 1994 archeologist Klaus Schmidt visited the same ridge after reading notes the University of Chicago prepared of their survey. What Schmidt is unearthing on a rounded crest – Gobekli Tepe (Potbelly Hill) – of the ridge is stunning.

Since the early 1900s the human transition from hunter-gatherer to farmer was understood to have occurred over several thousand years, culminating in development of cities by about 6000 BCE in Sumer, the area located between the Tigris and Euphrates Rivers in south-central Iraq. However the architecture of Gobekli Tepe is evidence of social organization and monumental construction that are far earlier than expected. Five-ton megalithic (mega: large, lithic: of rock) limestone pillars stand 18 feet above the floor of sub-circular structures, completed with stone and clay mortar walls and founded on bedrock below the surrounding ground surface. Floor plans of three of these buildings are shown in Figure 1. The pillars include bas relief of various animals – mostly predatory – such as wild boars, lions, foxes, scorpions, frogs, vultures, and other birds. The purpose of the structures remains unknown, but Schmidt interprets them as temples associated with an early organized religion in which animals were deified. 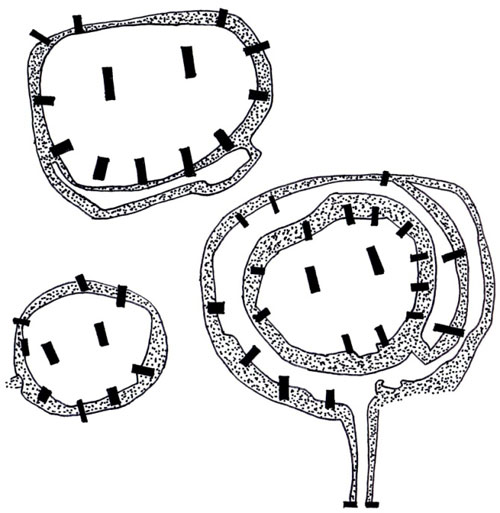 The sacred relationship between Earth and the cosmos is expressed by the circular architectural form as well as the chiseled ornamentation found at Gobekli Tepe.

The structures at Gobekli Tepe are generally devoid of subdivided space other than what appear to be few peripheral hallways or storage areas. Rather than a temple of worship with a common area separated from a sacred space such as an alter or place of offering, the temples at Gobekli Tepe have the appearance of undivided open, circular structures except for two T-shaped pillars placed off center within each structure and aligned generally in a northeast-southwest direction. The open, rounded shape is similar to a modern day arena or even the Roman coliseum where spectators observed games from peripheral seating while participants were located on the central floor area of each structure – like theatre in the round. The temples are preserved because the people intentionally buried them not long (perhaps several hundred years) after their construction.

Only a fraction of the Gobekli Tepe archeological site has been excavated. Nonetheless evidence obtained from Schmidt’s work suggests the site was indeed developed as a sacred space. The temples are located on a prominent hill overlooking a broad valley. The site provided unobstructed views of both Earth and the heavens. Yet the site lacks a source of water. This fact alone shows that the development served a function of greater importance than mere secular comfort. The circular shape of the temple buildings reflects a natural, organic form. The arena-like structures would have been intended for ritual or ceremonial purposes, observation of the cosmos, and allowing a relationship to build between the human occupants and the world. Important aspects of the architecture include the massive yet ornamented stone pillars decorated with numerous carvings of animals, circles, lines and anthropomorphic figures, the curvilinear, stepped stone walls, and floor levels situated below the surrounding ground line. One such pillar with bas relief is depicted in Figure 2.

Essentially the sidewalls of the temples are like mid-sections of spheres in contact with Earth below and the cosmic dome above. Standing at floor level in one of the temples we place ourselves symbolically at the center of the world. At night we can look up and see the moon, planets and stars. We might perceive constellations that help us orient ourselves with the night sky. We can envision the paths of the planets, Moon and Sun crossing the sky. Those paths form a band extending across the cosmos. It is a pathway we call the ecliptic. We can also observe the Milky Way stretching across the night sky, its bulge of stars surrounding the galactic center in the vicinity of the well-known constellations of Sagittarius and Scorpio. However, different cultures perceive different constellations. It is reasonable to assume that builders of Gobekli Tepe did not necessarily envision the same constellations as Sumerians did thousands of years later, or the Greeks who were responsible for many of the constellations we think of today. It is fortunate that the temples were buried so soon after construction, for the cosmology developed by their builders is preserved and communicated to us today, eleven millennia later. 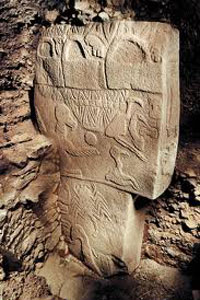 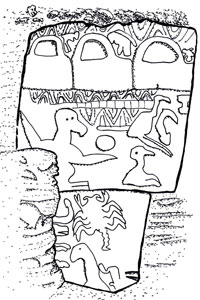 From the archeological evidence gathered to date there can be little doubt that Gobekli Tepe symbolizes an ancient cosmology, with the architecture representing the world and the carved figures symbolizing important aspects of the sun, stars and other features of the night sky.

One of the limestone pillars includes a scene in bas relief on the upper portion of one of its sides (Figure 2). Figure 3 is a line drawing of the same pillar. There is a bird with outstretched wings, two smaller birds, a scorpion, a snake, a circle, and a number of wavy lines and cord-like features. At first glance this lithified menagerie appears to be simply a hodgepodge of animals and geometrical designs randomly placed to fill in the broad side of the pillar.

The key to unlocking this early Neolithic puzzle is the circle situated at the center of the scene. I am immediately reminded of the cosmic Father – the sun. The next clues are the scorpion facing up toward the sun, and the large bird seemingly holding the sun upon an outstretched wing. In fact, the sun figure appears to be located accurately on the ecliptic with respect to the familiar constellation of Scorpio, although the scorpion depicted on the pillar occupies only the left portion, or head, of our modern conception of that constellation. As such, the sun symbol is located as close to the galactic center as it can be on the ecliptic as it crosses the galactic plane.

What is important here is for some unknown reason the builders of Gobekli Tepe constructed a temple apparently highlighting a time 11,600 years in their future. Yet this scene is intentional. The symbolism is clear and in keeping with many mythologies describing this very same event – occurring at the very time we live in today!

Figure 4 illustrates the ecliptic crossing the galactic plane of the Milky Way near the center of the galaxy, with several familiar constellations nearby. Figure 5 is the same view with the addition of the ancient constellations represented on the pillar. Note that the outstretched wings, Sun, bird legs and snake all appear to be oriented to emphasize the sun’s path along the ecliptic. Detailed analysis of the architecture at Gobekli Tepe is needed to further evaluate the scene carved onto the pillar. However, the similarity of the bas relief to the crossing of the ecliptic and galactic equator at the center of the Milky Way is difficult to reject, supporting the possibility that humans recognized and documented the precession of the equinoxes thousands of years earlier than is generally accepted by scholars at this time. Gobekli Tepe was built as a symbolic sphere communicating a very ancient understanding of world and cosmic geography. Why this knowledge was intentionally buried to ground level soon afterward remains a mystery. 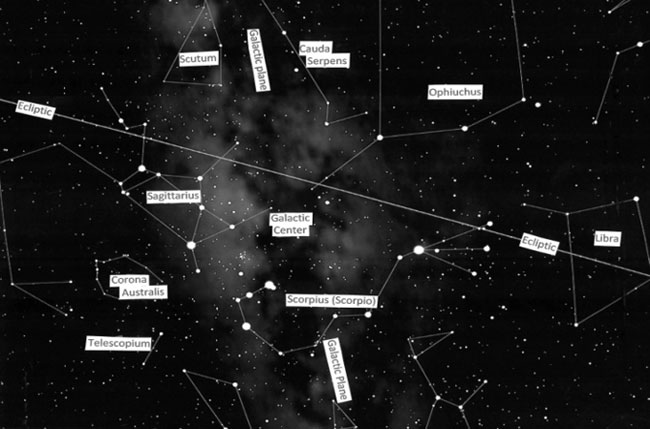 Figure 4: Ecliptic crossing the galactic plane of the Milky Way near the center of the galaxy, with several familiar constellations nearby. (Sky graphic using Stellarium 0.10.61) 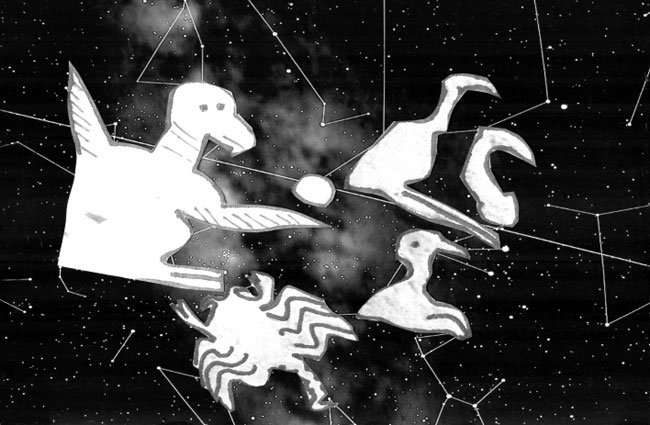 Figure 5: Same view of night sky as Figure 4 with addition of the ancient constellations represented on the pillar. Compare with Figures 2 and 3. Note that the outstretched wings, Sun, bird legs and snake all appear oriented to emphasize the sun’s path along the ecliptic. (Sky graphic using Stellarium 0.10.61)

Paul D. Burley is an engineer, geologist, researcher and author. His latest book is ‘The Sacred Sphere: Exploring Sacred Concepts and Cosmic Consciousness through Universal Symbolism’ (Beaver’s Pond Press, © 2012). The book explores the many facets of circular pictographic symbols and ancient architecture representing the sphere. ‘The Sacred Sphere’ shows that all sacred circular symbols throughout time have represented relationships between humans, the world, the cosmos, and the Creator as defined by each culture around the world. The book also defines the unique geometric structure from which all sacred geometries and sacred circular symbols are derived.